A Year later and a Sticker Short

Since there was such a lukewarm reception to my query about what I should do for the next year, I've decided to just go ahead with the remainder of my calendars, and save my other special project for next year.  To anybody disagreeing with my decision, you brought this upon yourselves.

As it turns out, there was one additional month added to the Kitty Calendar, just in case the owner forgot to get a replacement, and needed some extra time.  But don't get all excited.  It's just a stripped-down repeat of the first January logo.  To make up for that slight, here's some additional stickers sprinkled throughout. 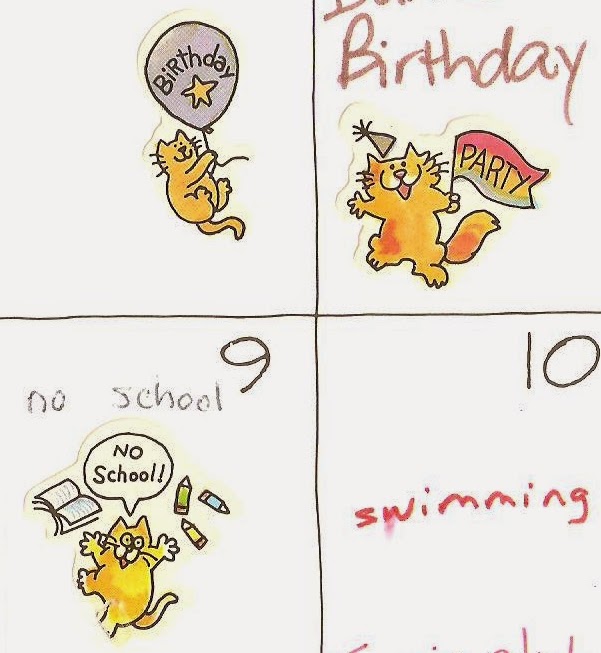 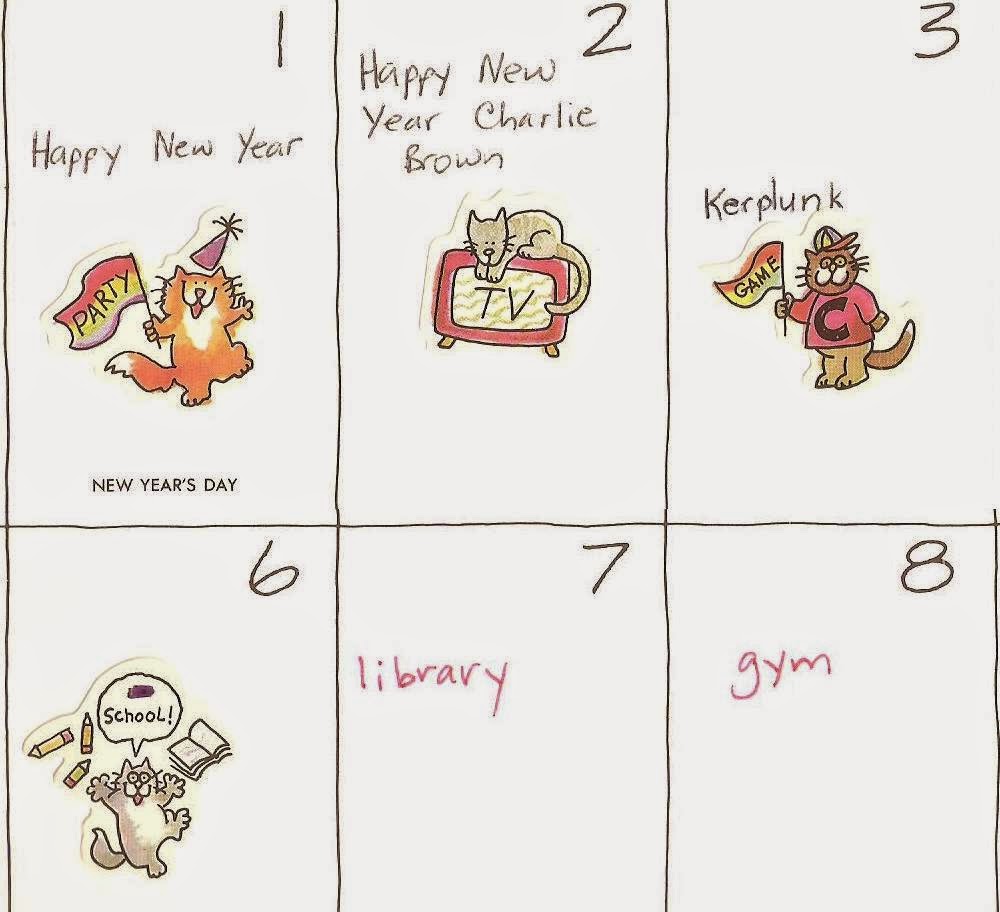 That sticker above with the "no" in "no school!" crossed out, was to indicate when we were supposed to go back after Christmas Vacation, which always felt too soon. 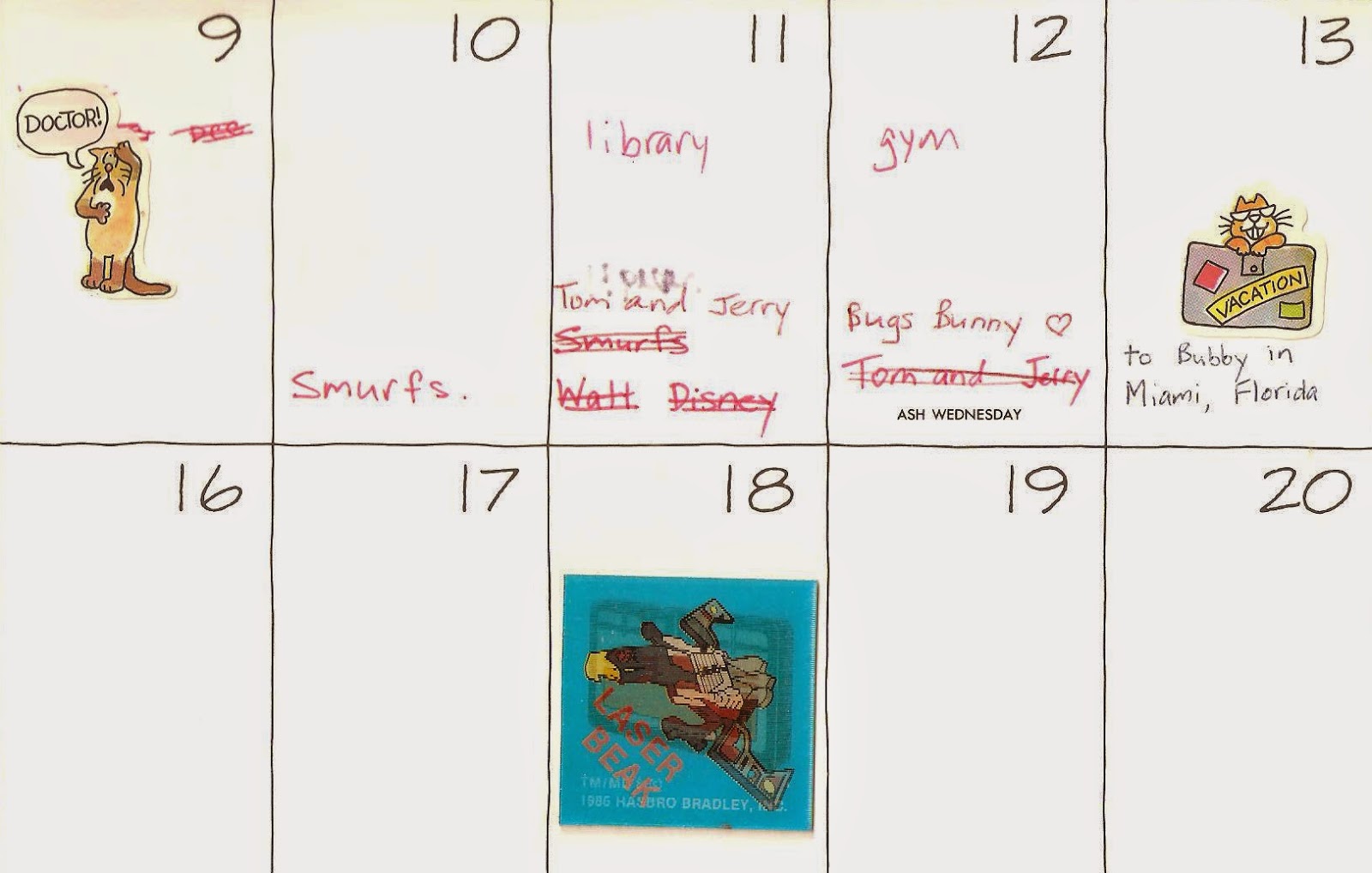 We've also got some interesting results from some Transformers holographic stickers.  They wind up looking superimposed upon each other.  It's too bad the Bumblebee one isn't too clear. 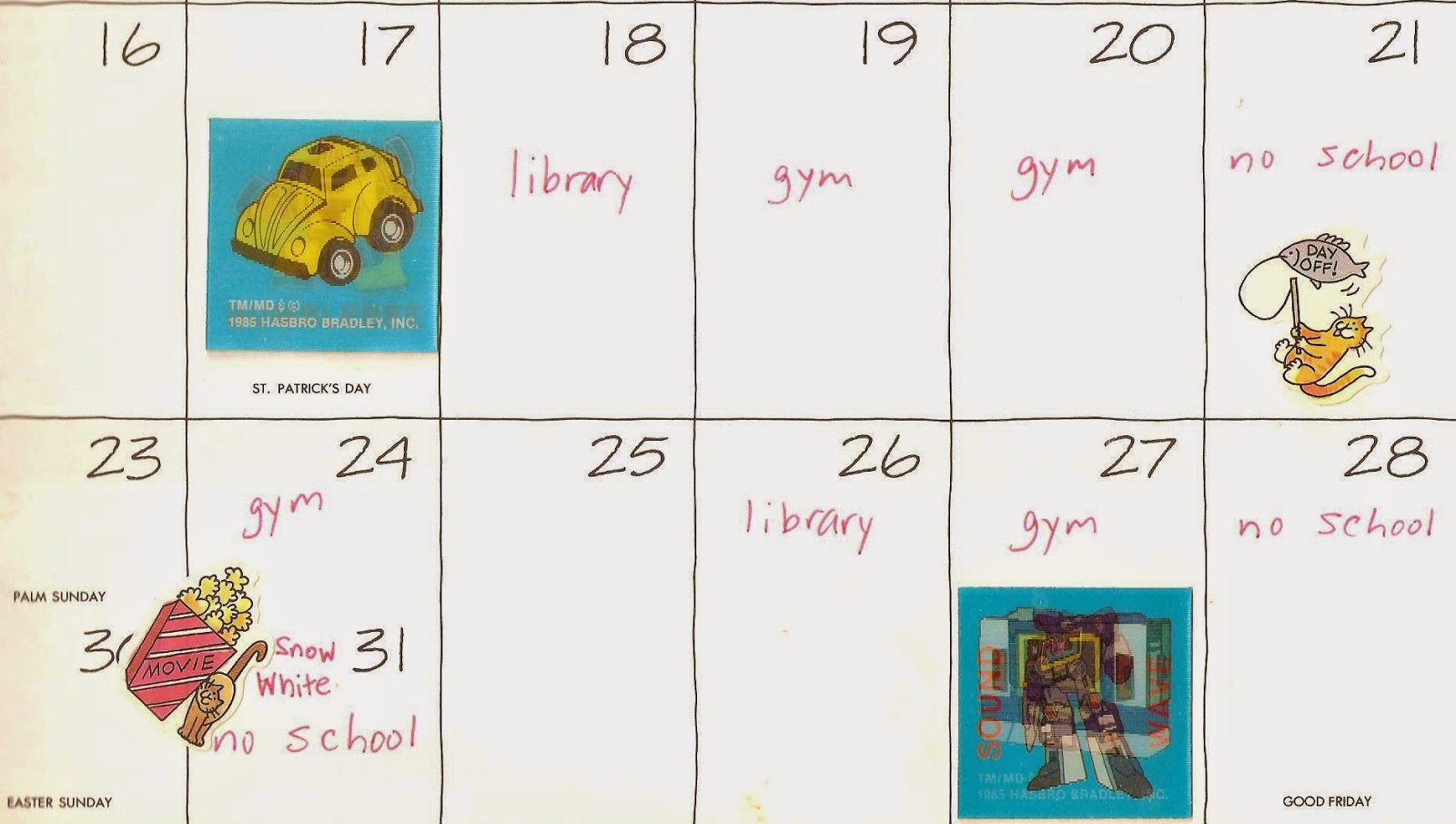 I've deleted any reference to names where parties took place, as so not to disturb anybody's privacy. 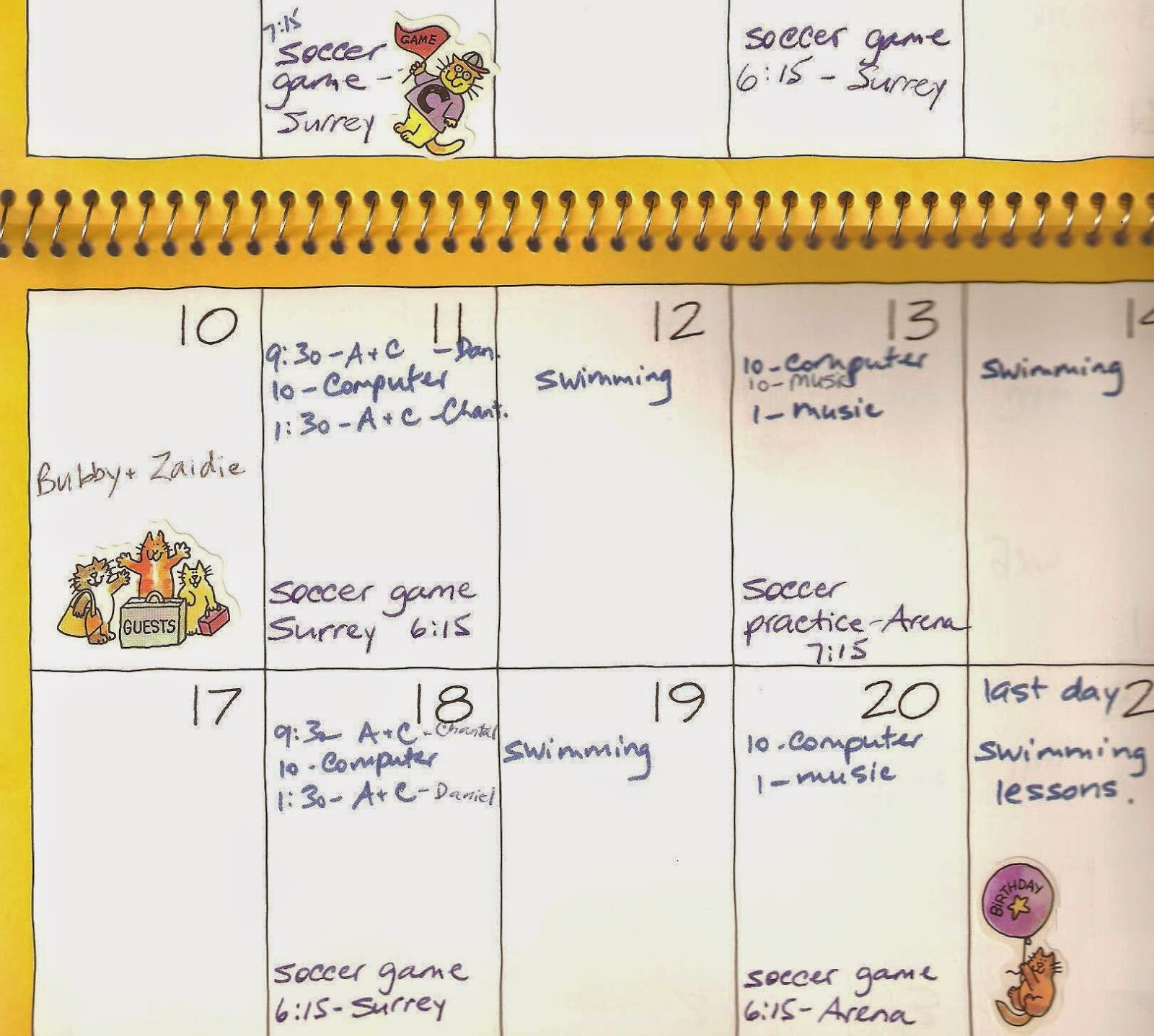 These appointments should be considered vague enough to leave little to the imagination for where such events occurred. 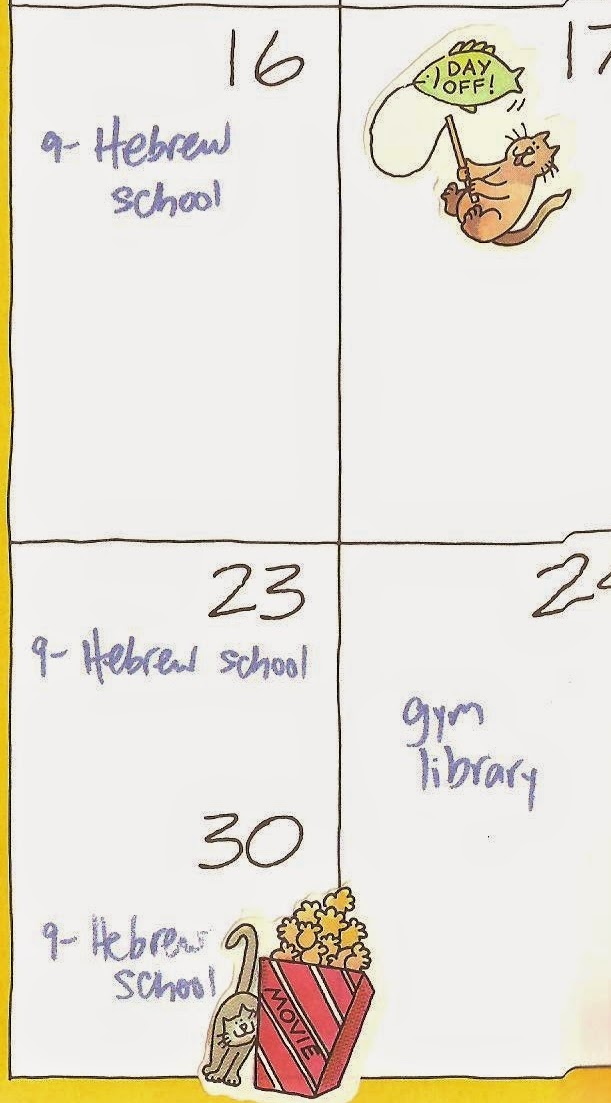 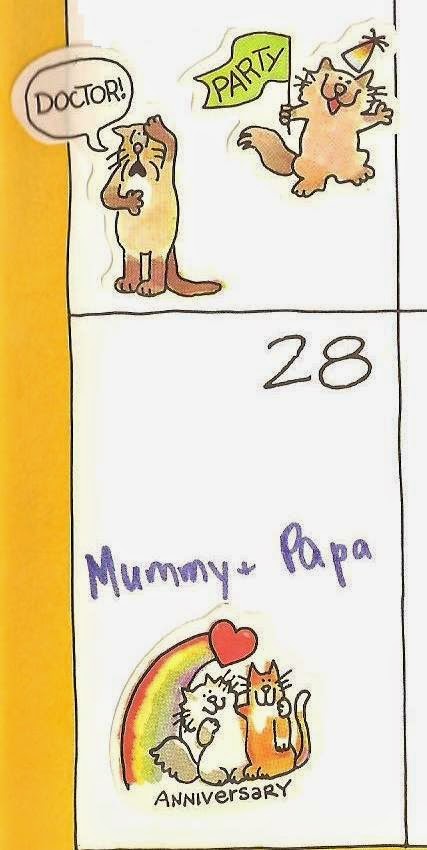 While the Kitty Stickers were pretty sparse in finding, the Peanuts Calendar presented no such obstacle. 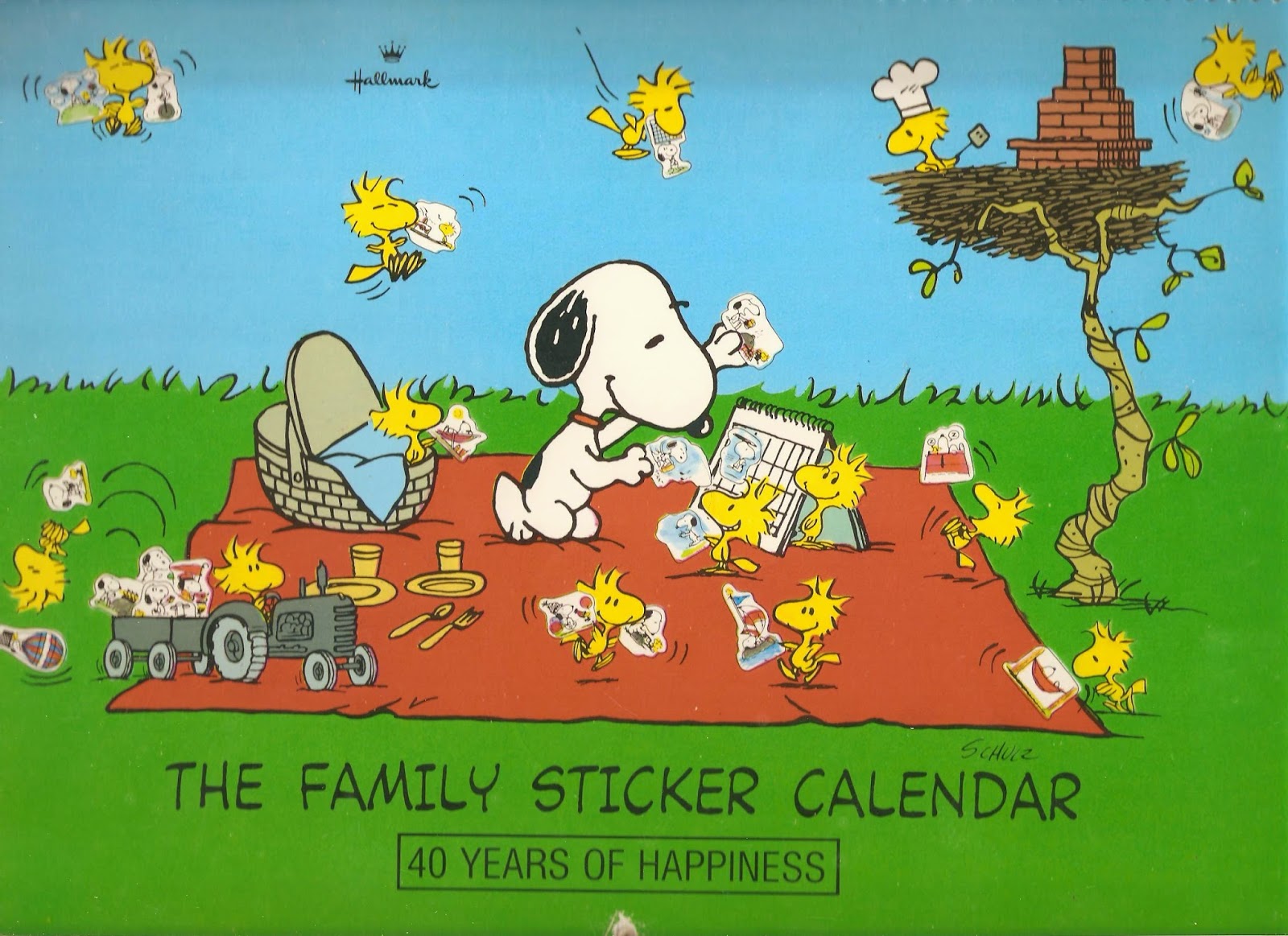 There were two sheets of stickers, and I was able to combine the two together, along with some missing images found throughout, and reproduced the results as best as I could. 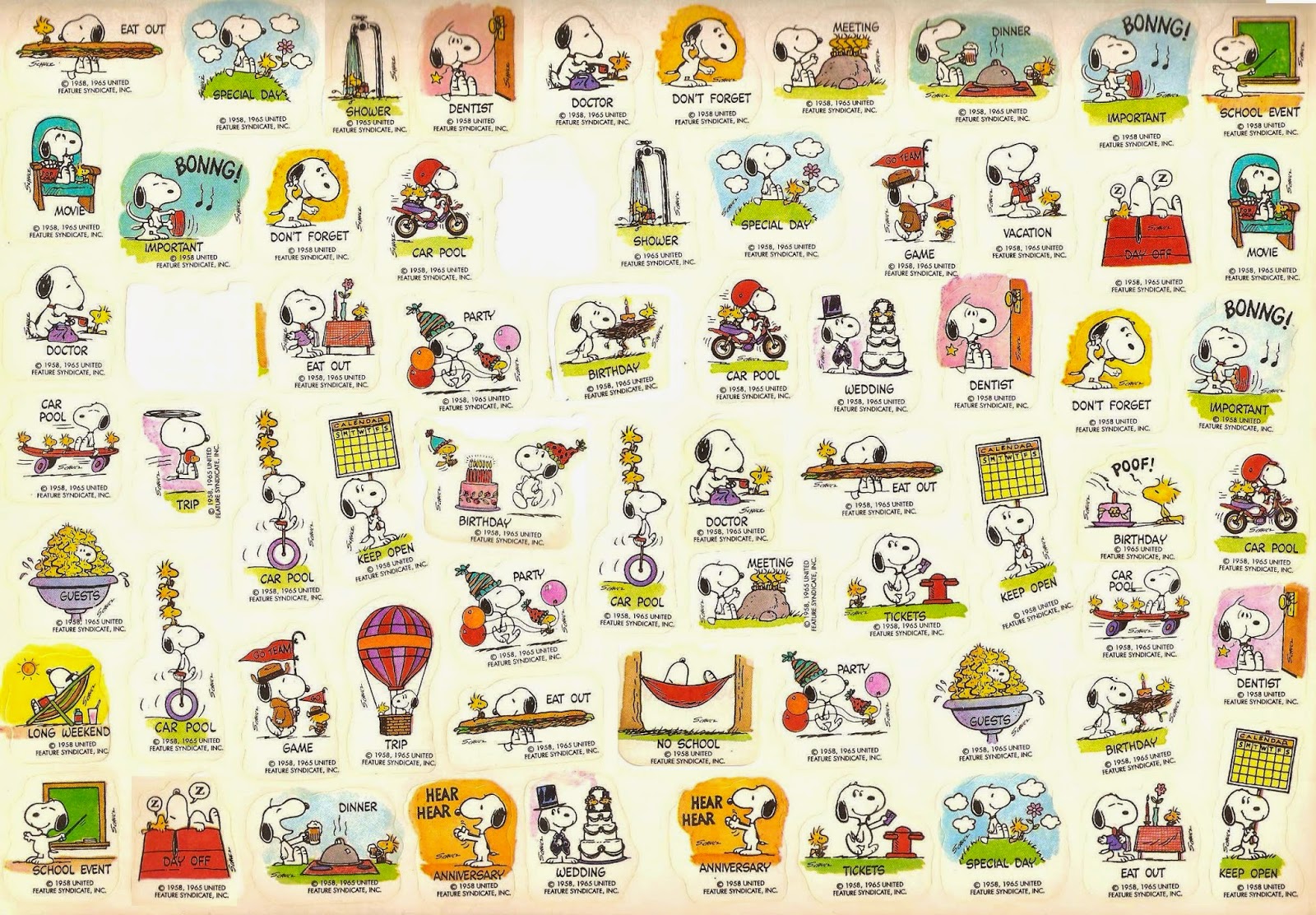 The Peanuts Calendar also had some V-game characters for one month, which I'm including here just for completist's sake.

Moving on to old Calendars is the 1997 Mr. Bean Calendar, based off the Mr. Bean movie where he unintentionally wound up vandalizing the Mona Lisa.  So why stop at destroying one piece of art?  In this case, the result of improvement (Mr. Bean's words, not mine) is little more than random doodling on specific parts. 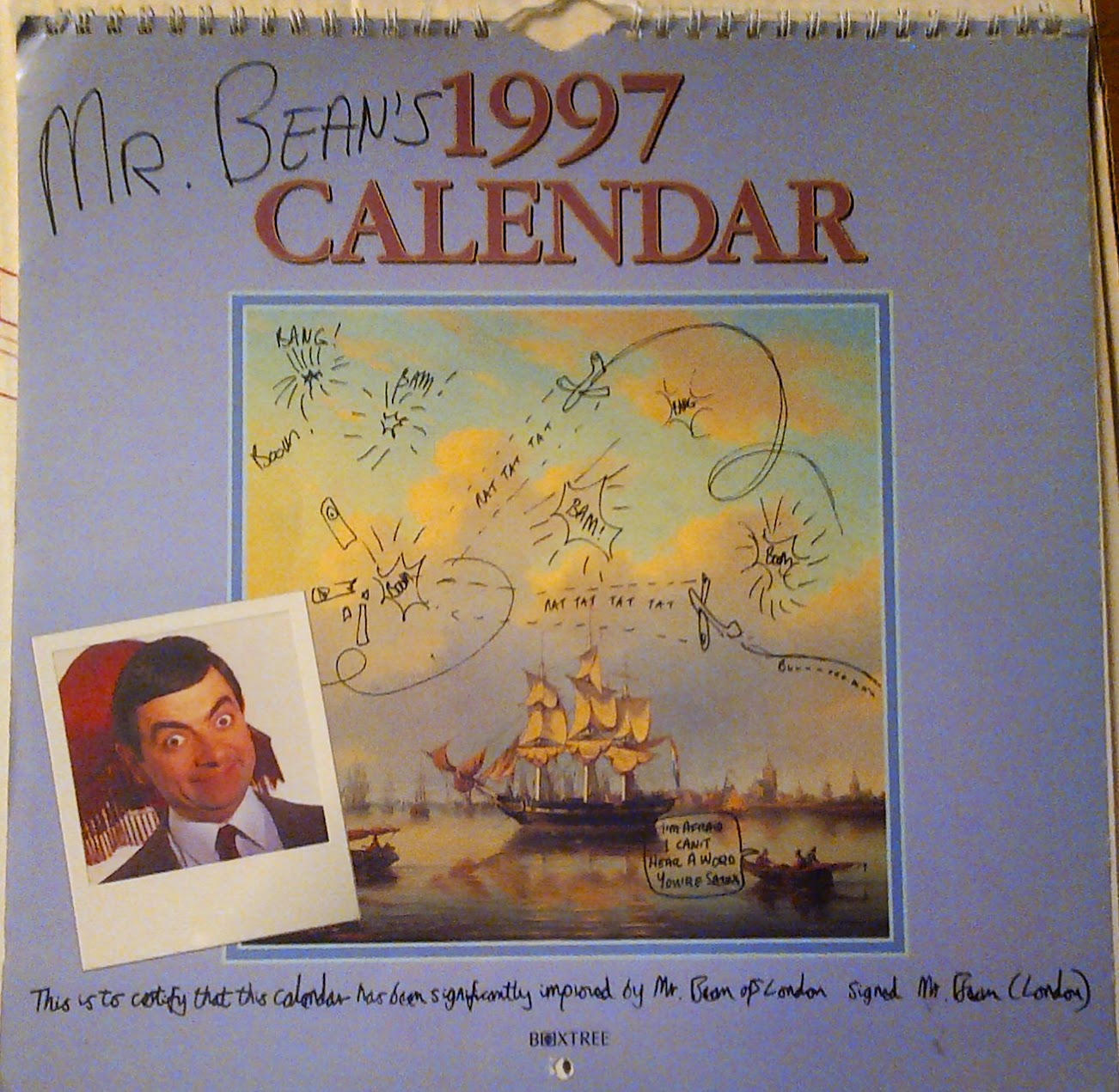 Actually, despite the amusing additions, this calendar was a pain the whole year.  Why?  Because the inside was the British calendar system, not the Western system.  What's the difference?  Well, the British calendar starts the week on Monday, not Sunday, so my usual date-keeping method of keeping track was thrown completely out of whack.  Days I thought would be Wednesdays would turn out to be Thursdays.  The joy of a side-by-side two-day weekend was nullified with the knowledge I wouldn't relax with the next week of confusion.
Like the Murphy's Law Calendar, this calendar also had scribbles from Mr. Bean included in the dates.  For the first month, there was just one, reproduced below:

For the remaining two calendars, I`m refraining from showing you the covers, since they`re reused inside.  If you're utterly impatient to wait months for the results, you're free to search yourselves.  Here then, is the 1991 Ziggy Calendar. 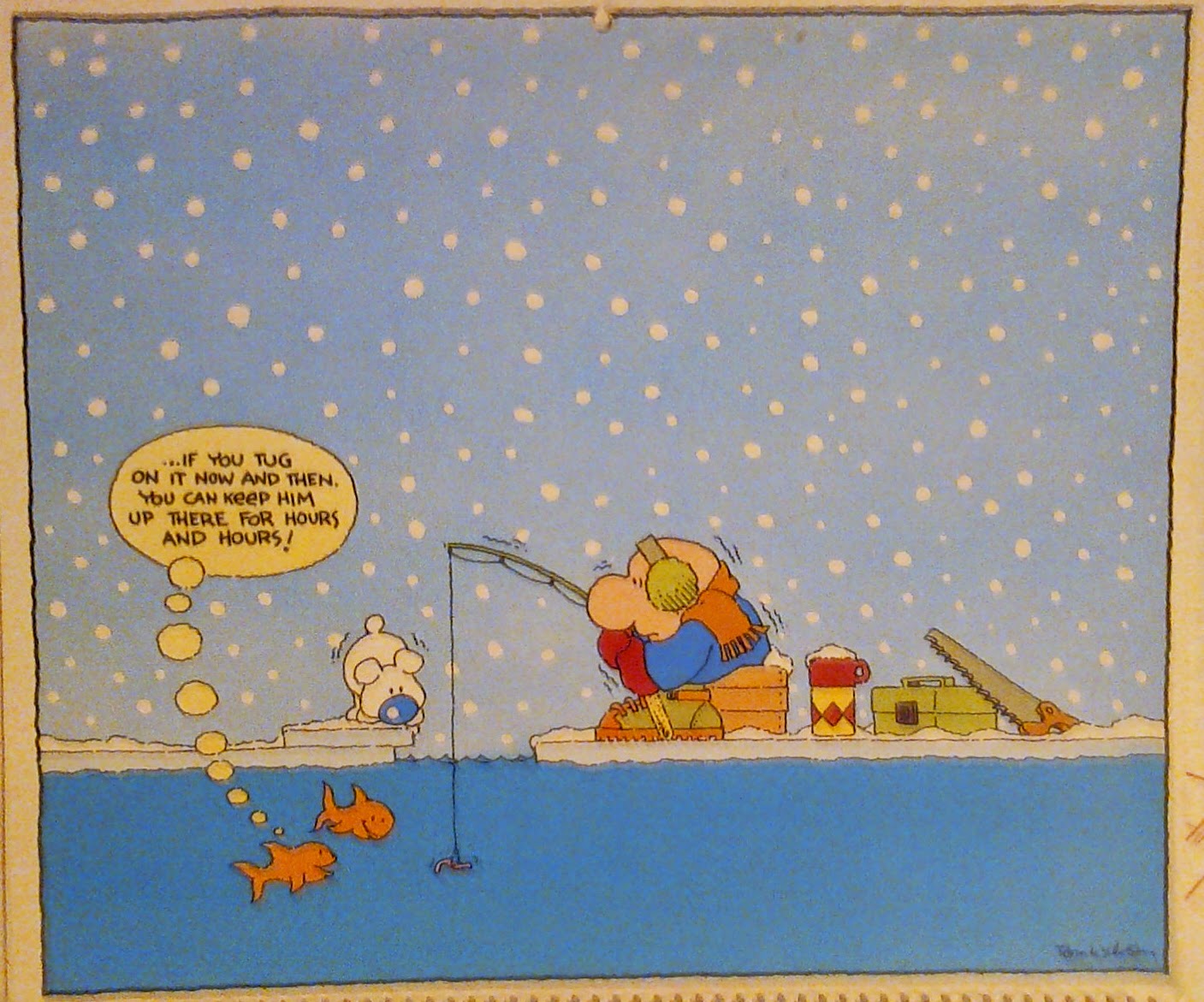 Only the first month had had this little disclaimer before the dates:

Lastly, we've got the 1994 Mother Goose & Grimm Calendar, fittingly enough, subtitled, Year of the Dog.  Since this is the Year of the Sheep, consider this as somebody being a border collie, with all the competence the competition applies. 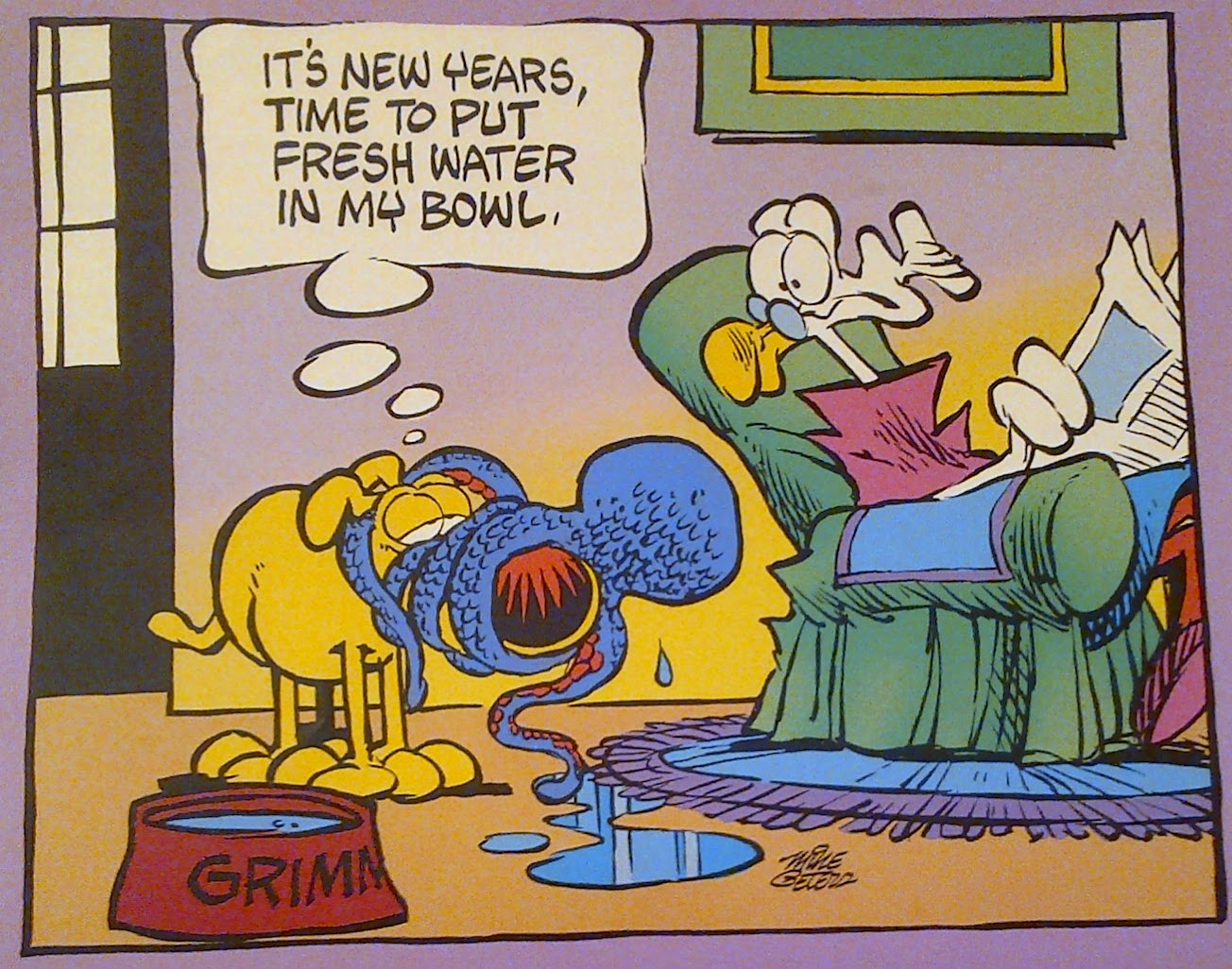 Like other cartoon calendars that go the extra mile for the distance, the Grimm Calendar also had extra illustrations added within the date crossword page. 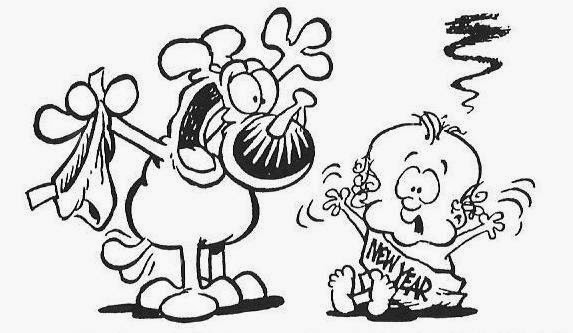