It's just recently come to my attention that the AV Club is doing several articles devoted to Sesame Street, ranging from the psychedelic Pinball animation to the first (failed) attempt at a feature-length film, Follow That Bird.  It may seem intuitive making education entertaining now, but at the time Sesame Street debuted, it was considered revolutionary.  In fact, there were early critics who decried their way of teaching, saying that it wasn't how they were taught.  "I never had any fun growing up in school, so why should children enjoy learning?  They've got to learn the value of hard work." 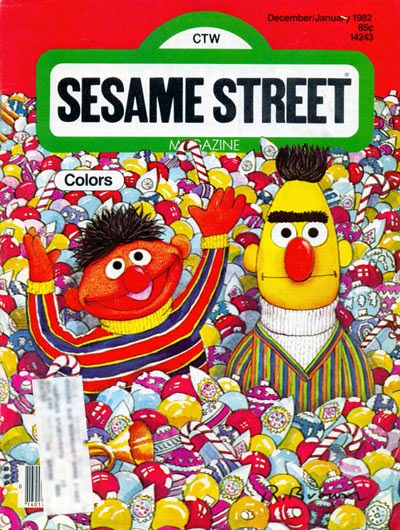 Originally, Sesame Street was aimed at educating young black children, which is why the setting takes place in an urbanized Ghetto.  However, the resulting popularity of the show expanded beyond their intended audience.  The vast variety of distinctive characters with personalities created a merchandising bonanza, all funds of which was fueled back into the public sector keeping PBS afloat.

Sesame Street was one of the few shows that had Close Captioning available, that made it easier for me to understand what was being said.  As I've mentioned before, it's incredibly difficult to lipread a Muppet.  However, I had to be told secondhand that the majority of the text that made it onscreen was drastically reduced and simplified, so I missed out on most of the subtle jokes and commentary that went in the dialogue.  On the one hand, it's understandable to keep the amount of text at a reasonable level so not to intimidate younger readers off.  On the other hand, it's still disappointing knowing that I only got a fraction of the material that basically reduced the entirety of a clever sketch into cliff notes. 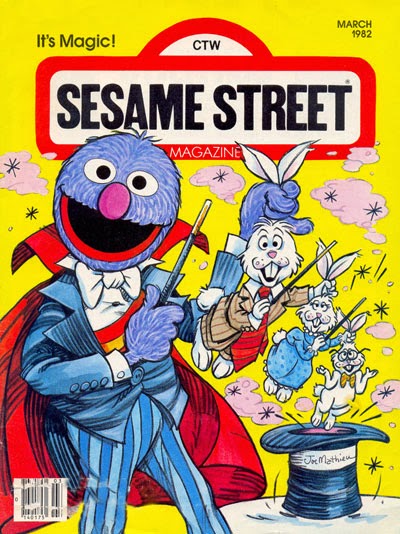 In the midst of this promotional merchandising and book material was the Sesame Street Magazine for very young children, which had varied artists such as Tom Leigh, Normand Chartier, Mike Smollin and Joe Mathieu who were responsible for some classic children's books in the same lines.  Several of these books were based on sketches that appeared on the show, such as The Great Cookie Thief, The Many Faces of Ernie and The Bert & Ernie Book. 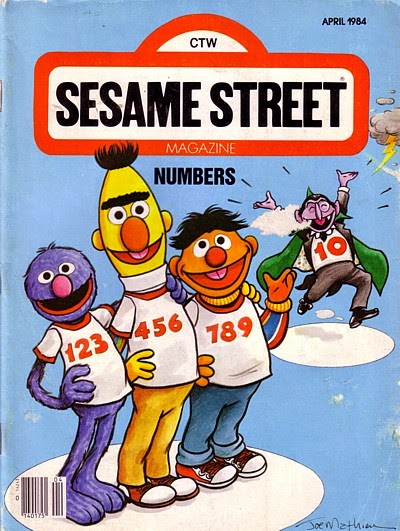 One thing that the Muppet Wiki neglects in their Magazine covers is that there were some wraparound covers that continued around on the back.  As a result, we only see half of the intended image. On the other side of this cover was Oscar the Grouch painting the name for his rather messy-looking boat, GrouchShip. 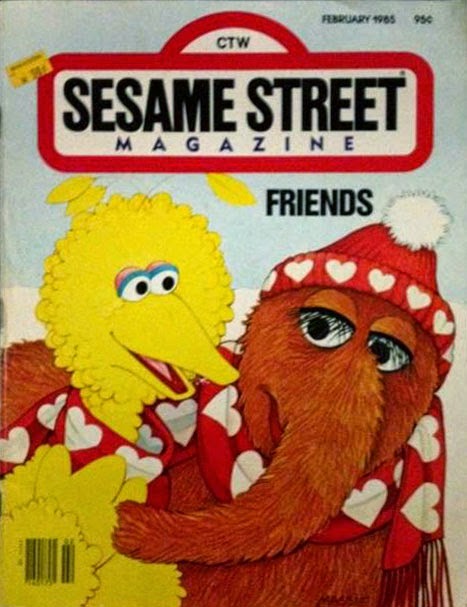 This rather poignant cover is made doubly so by having the extra-long scarf wrapped around the necks of three to five other diminutive muppets, increasing in size before extending to Big Bird and Snuffy.

For this cover that took place in late March, we see a brief reversal - Bert looking happy for a change in front of Grover holding a suppressed smile while Ernie looks on with jealousy. 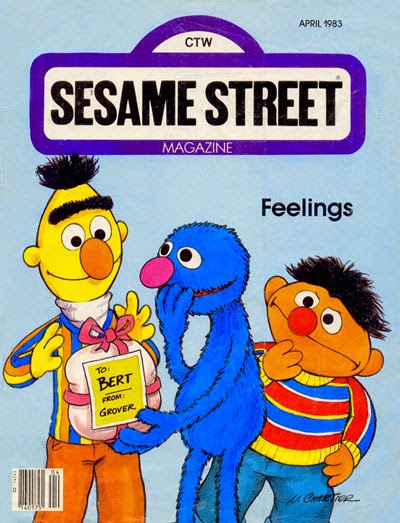 It's only on the back that the emotions are reversed, with Bert looking on disapproval, and Grover and Ernie looking on with amusement at Bert's present consisting of a Rubber Duckie tied to a balloon saying "April Fool".  Only Grover is consistently cheerful on both accounts.

As for the actual content of the magazine itself, my memory is rather sketchy.  All I have to go along with are the bits and pieces I've found here and there.  One of these samples comes in the form of a cut and paste puzzle where you would have to put the correct tool needed for the job... 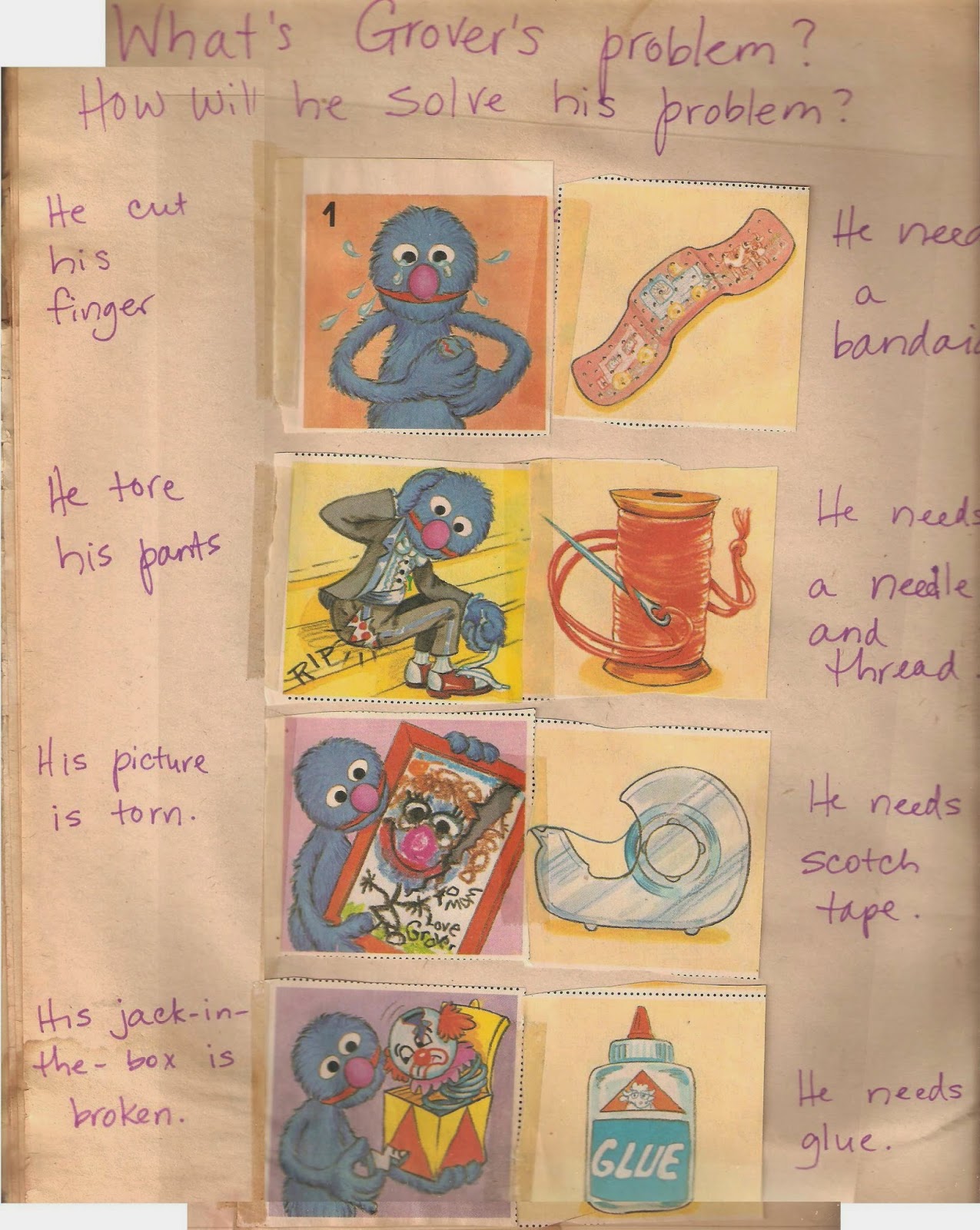 ...which would result in a complete picture on the reverse side. 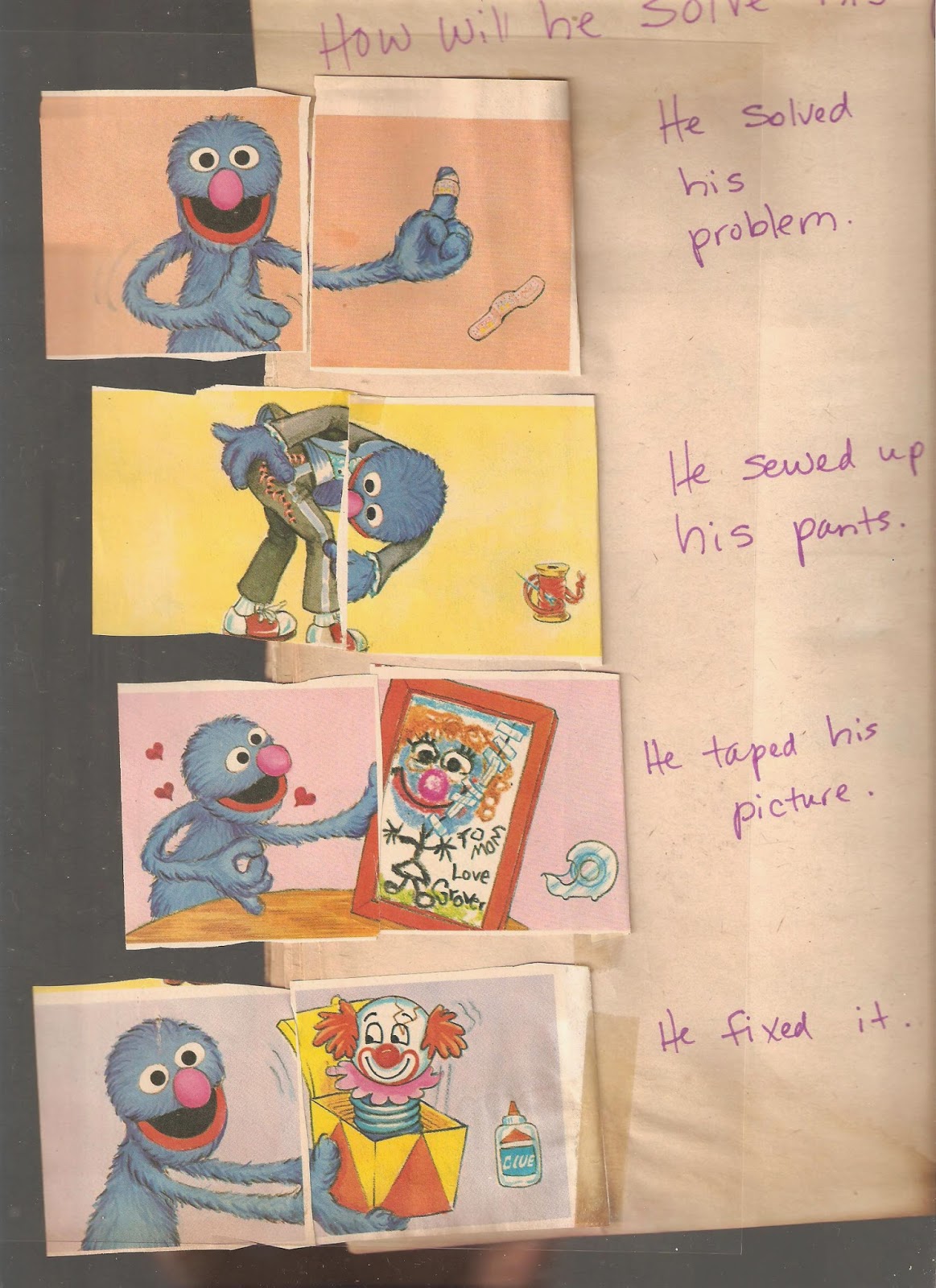 Obviously, this was back when Grover was the poster child for cuteness before Elmo snatched away that position from him.  Below is one of Joe Mathieu's pictures that I vividly remembered, back before I realized it was a Norman Rockwell tribute. 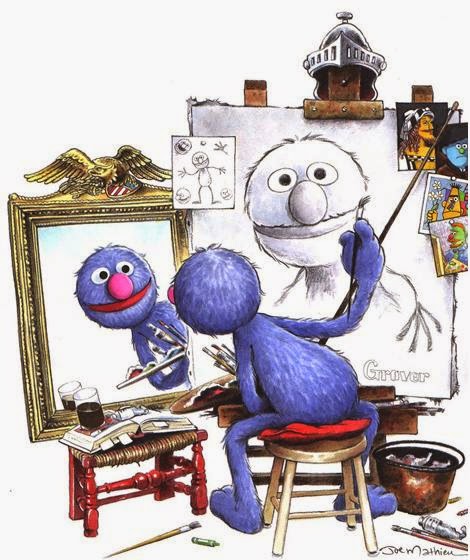 Other cutouts were closer along the lines of full-pagers that were intended to be folded into quarters, resulting in a miniature book with cutout flaps. If you open the door (instead of turning the page, you'll see this lovable furry face staring back into your soul: 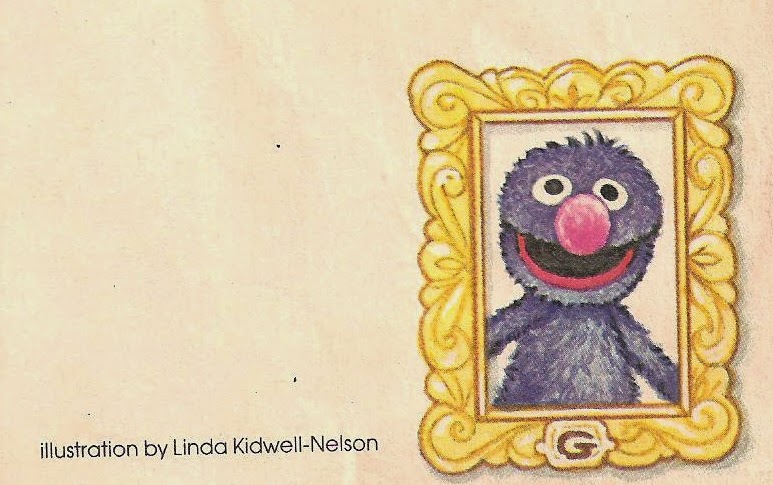 Continuing onto the middle section, you'll come across the easy teaching part, with the answers clearly available in connect-the-dots form - so easy that you don't even have to bother writing down the numbers in the first place, let alone double-check the references.  It never even occurred to me to find the odd monster out on the wall there. 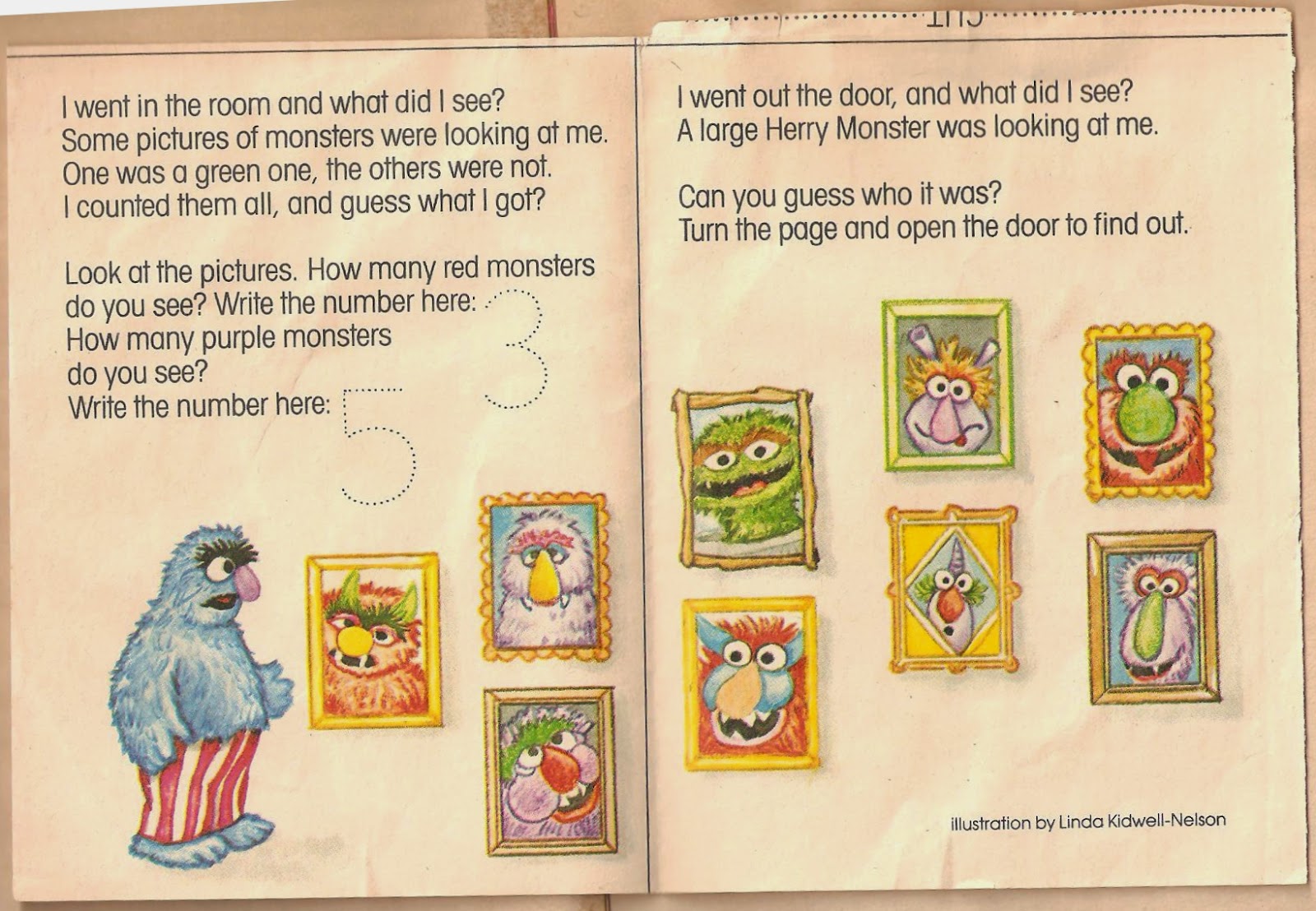 At the time, I was unable to possess enough imagination to accurately portray a monster, so I just took off from Herry monster's mirror instead, and tried drawing a self-portrait, which went as well as expected for someone whose preferable communication tool was crayon. 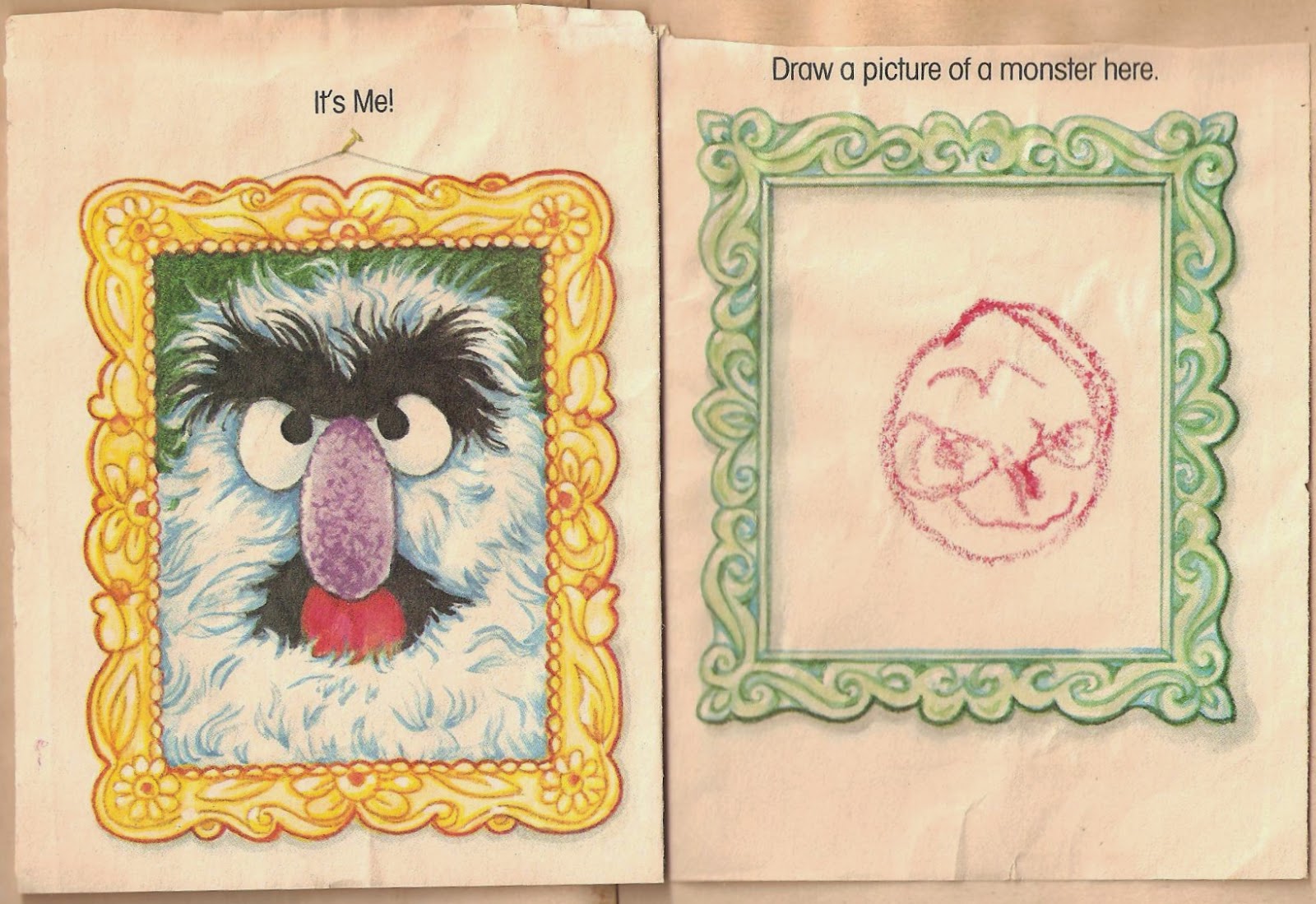 There was another cutout page book staring Mumford the Magician and his Amazing 3 Birds act that for some reason I can't seem to find.  It's popped up sporadically in my previous forays into my nostalgic archives, but hasn't made itself available now, so I'll describe it as best as I can.

Mumford naturally made a big presentation out of being able to make birds appear, but when viewed under the flap of his hat, four birds were there.  He figured that he looked under the wrong place, because having more than the expected number of animals appearing is grounds for failure, so he checked inside a magic box, expecting the correct outcome, but instead:

"My, my my, Five birds.  What's going on here?"
Seeing no success in any of his attempts (including looking under a cage, which resulted in six birds), Mumford decided to go back to the basics.
"I'm going to look in my magic book to see what I am doing wrong..." and under the flap for the magic book were three birds.

The only way you could preserve the interior of these cutouts was was by photocopying them, and having colour copiers would be considered expensive even back then.  The text to Big Bird's Birthday Book (postmarked April 3 and illustrated by Ellen Appleby) was so faded that it's difficult to make out.  To save yourself the irrelevant eyestrain, here's the reproduced text as best as I can figure: 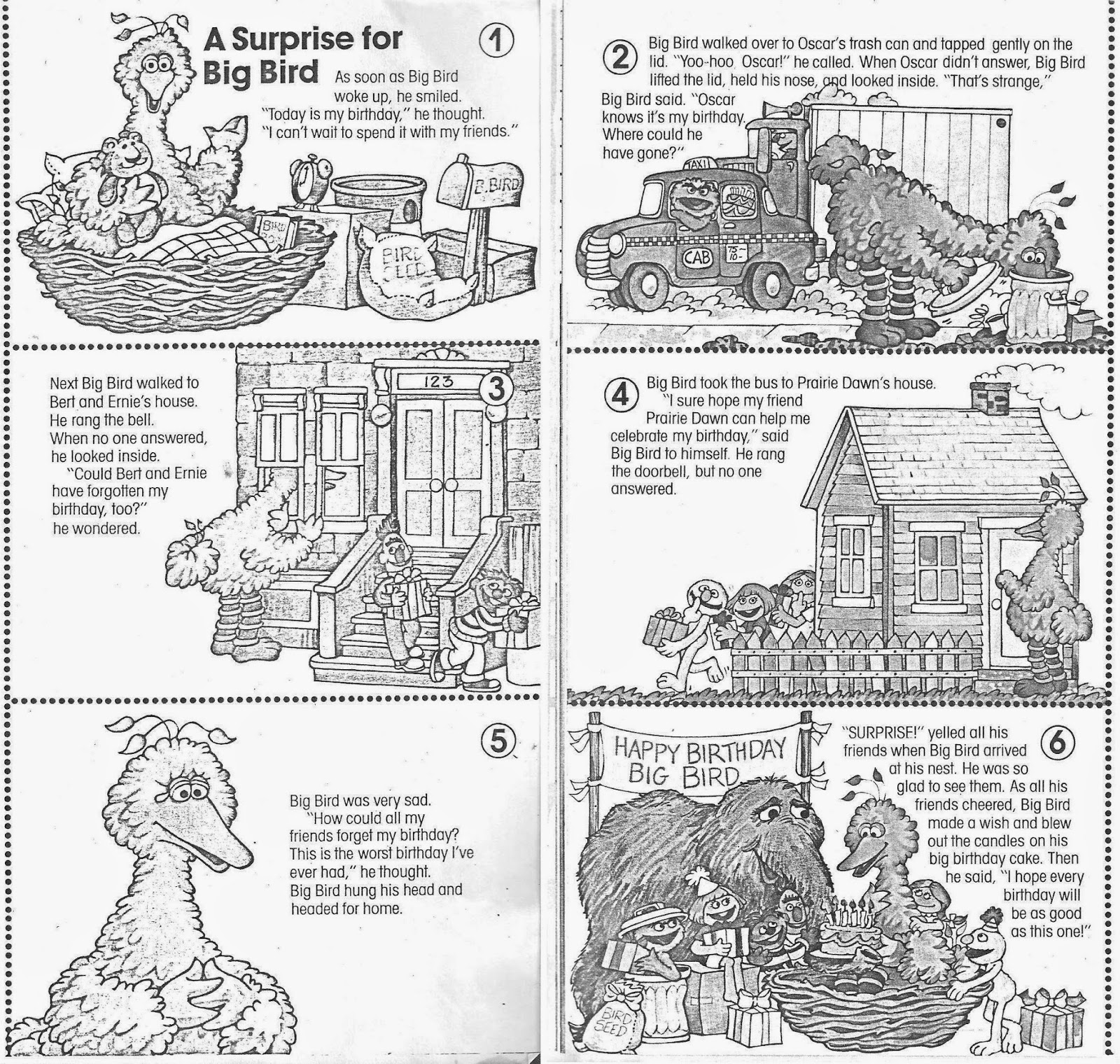 "Big Bird's Birthday is this month.  To help celebrate his birthday, you can make a little book to keep beside your ___ ___ cut out these ___ ___ page 1 on top of page 3 and 5.  Staple these pages together.  Then read A Birthday surprise for Big Bird."

If you're wondering why there aren't more complete versions of the children's magazine, these samples should show you why.  Any parent who'd get this for their children wouldn't balk at having these bi-monthly timewasters occupying their offspring's attention away from distracting electronics would hardly be put off by any intentional vandalism these temporary books would go through.  Not to mention that many of the pages wouldn't make much sense until they were cut up and reorganized into something comprehensible.  I even had a page about Trick-or-Treating that was glued to a Television costume I wore for years.  Sadly, there are no high-def photographic closeups of the image in question, leaving the haunting memory a perpetual mystery.  For any obsessives who demand perfection from their collections, is it at all surprising that so many of these found their way to the trash heap?  If what you've got is incomplete, what's the point of having them around, if only to remind you of what a mistaken wasted opportunity you made?

The only collections of Sesame Street material were compiled in books like the Bedtime Storybook and The 15-volume Sesame Street Treasury, which while overly large, don't seem to contain the same material that was once in the magazines.  You'd think the wealth of available material printed back then would be up for grabs for reprinting, but that doesn't seem to be the case here.  Much of it was elementary-level knowledge, but people have fond memories of things tickling the back of their heads, not to mention children who'd be pleased with discovering old material once again. 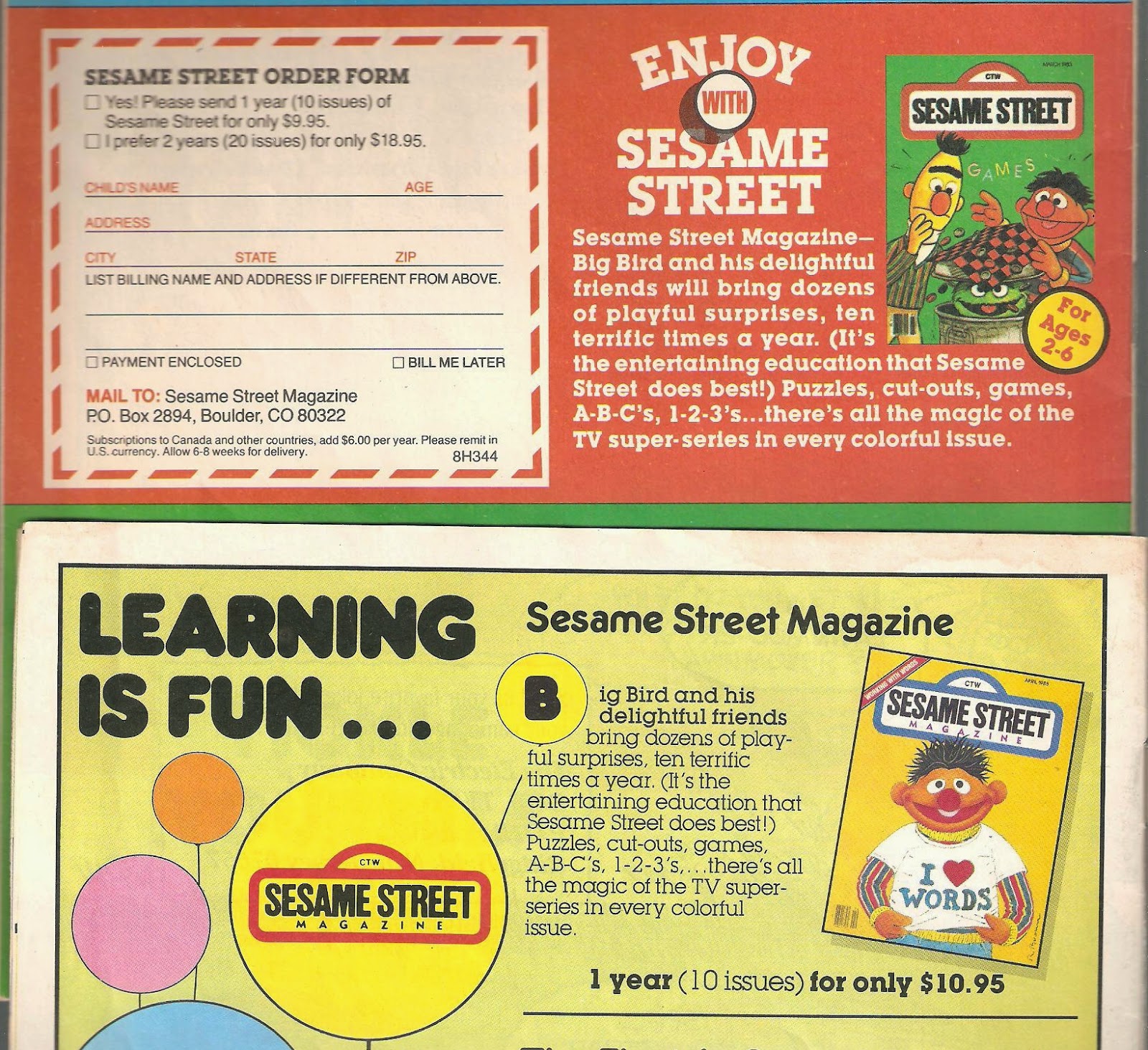 Do you suppose these magazine order forms are still good?
Posted by DeBT at 5:52 PM