There are stories that go out of their way to shock you, either by using horrifying imagery inspired by the latest sensationalistic movies, or news ripped from the headlines, usually by means of hitting their moralistic themes on your head until you get the point.  Then there are stories that start out relatively mundane, and the actual horrifying implications don't register until it's far too late, leaving you with a feeling of dread, even as you marvel at the workmanship.  Not unlike the legendary Garfield Halloween cartoon (the book title of which I still fondly remember as Garfield in Disguise)  This latter method is much more difficult to pull off, which may be why very few people bother to try emulating it. 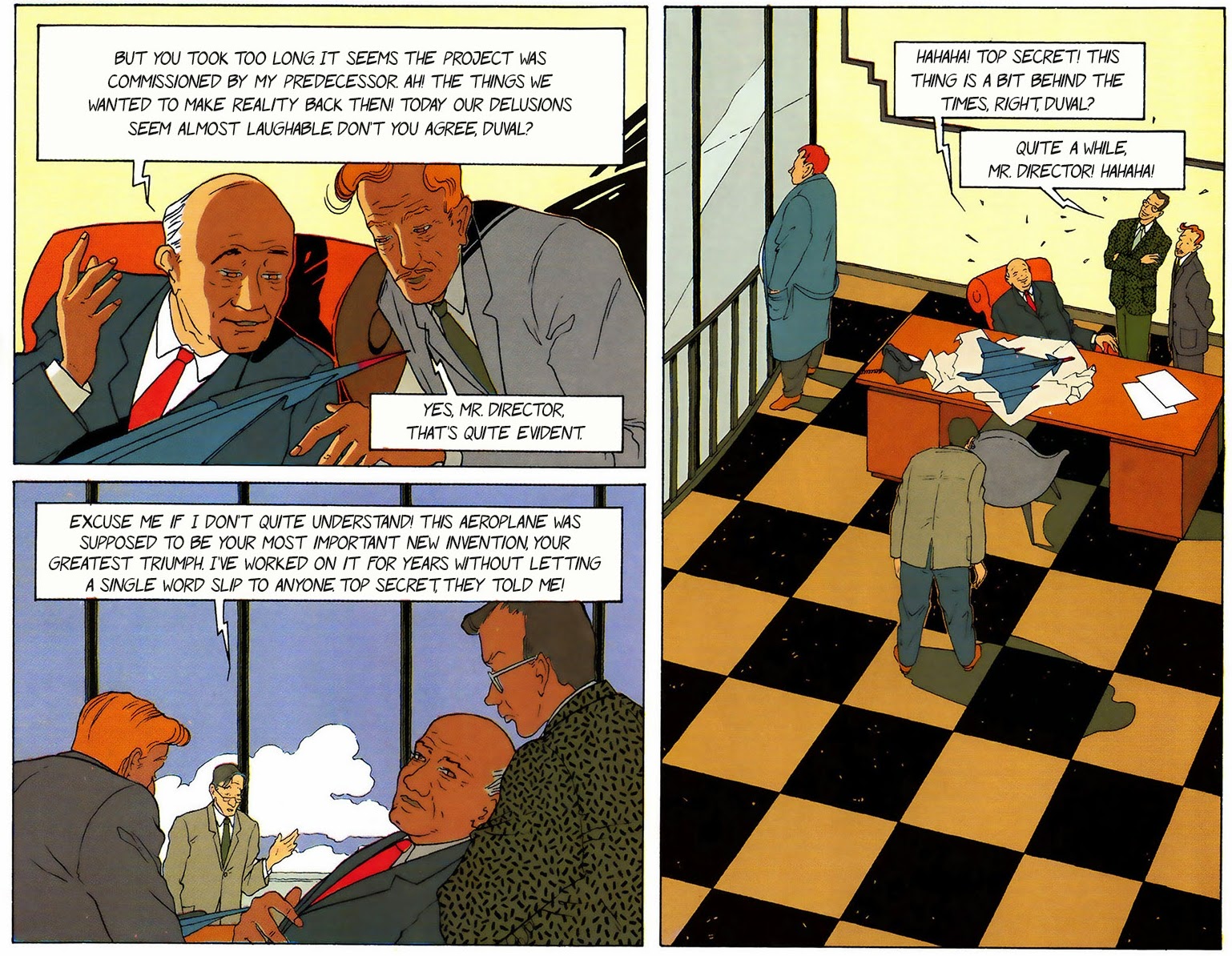 Georges Leterrier is a man who obsessess with making his model crafts be scale models of the original with exacting detail.  In fact, he's so much of a perfectionist that by the time he's finally finished designing and compiling a top-secret military plane, the manufacturers have gone under new management multiple times, and they have to refuse taking the model off Georges hands, since his design is now obsolete.  While carrying the rather bulky miniature plane via public transportation (bumping into irate passengers), a boy expresses interest in his design, which was created with materials identical to the original.  George goes into detail, saying that getting parts for the engine was the hard part.  Having no further use for the fancy paperweight, he freely offers his extra-large toy to the boy free of charge. 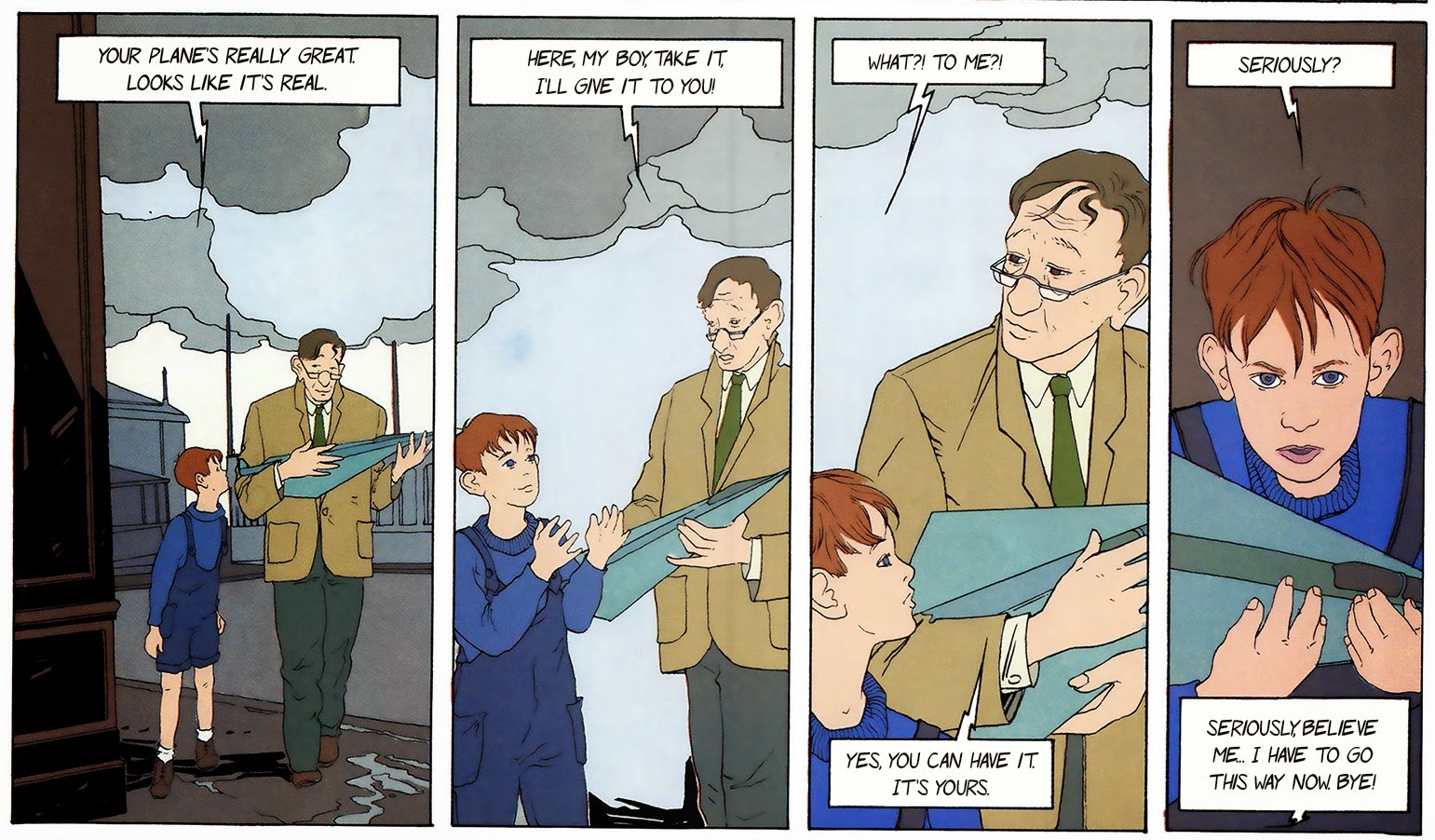 On the way home, he's surprised to see a chauffeured limo there to pick him up.  Earlier, he saved an actress caught in a downpour with a broken car, who was shown to his model specs by his invalid live-in brother.  On the trip there, Georges admits to being farily ignorant about the movie business, since it's been years he last saw a movie, and is completely unaware of just how much of a household name Dolores Moore is. 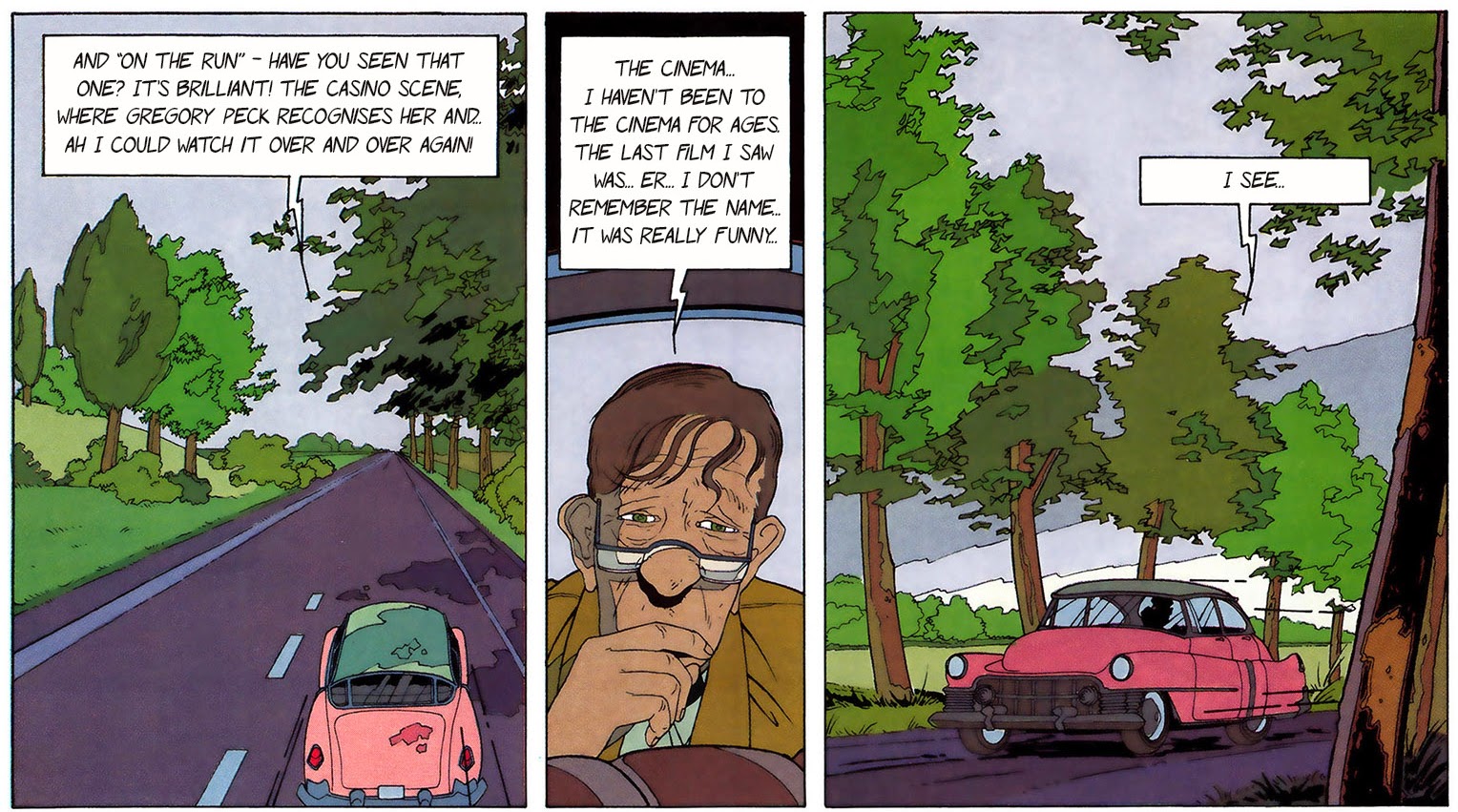 When he finally arrives at the villa, Dolores has an unusual request.  She was rather impressed with his attention to detail for the model plane, and would like to have something similar for the house she's living in.
Georges is apprehensive and stunned, saying that a project of such an undertaking would take years to complete.  Dolores reasurres him that time and money is not a factor, since she'll be leaving for months, being involved in filmmaking in America.  As for living, he'll have permission to stay as long as is needed in order to complete the project.  Just go over the details with the staff, and there'll be plenty of room anyways. Upon leaving, he chances upon a movie theater, and decides to indulge himself a little to familiarize himself with who he's going to be working for now. 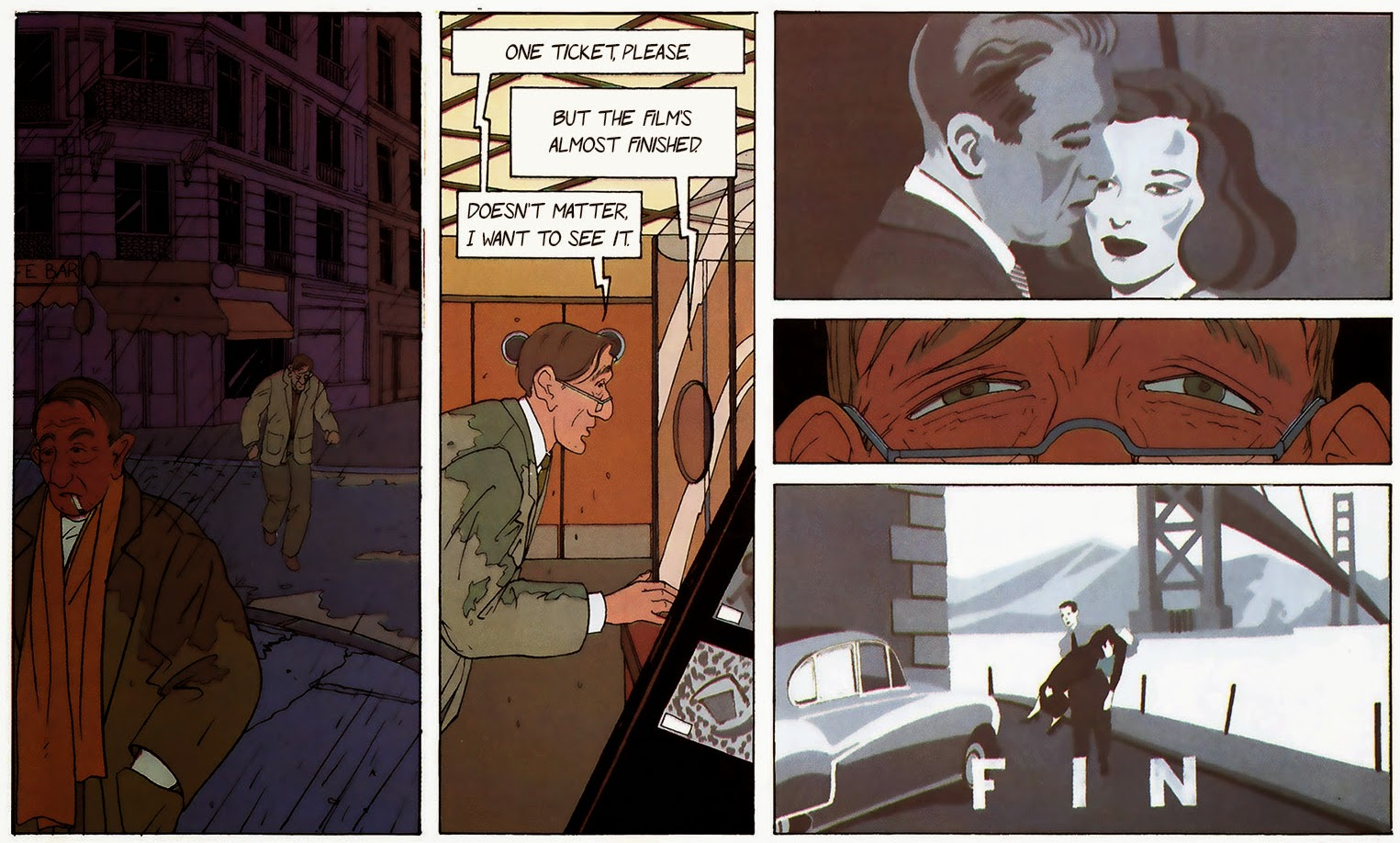 When Georges comes home, he gently tells his brother about his new job, who doesn't take the news very well.  For the record, this occurs on September 28th, 1957.  There's nothing terribly significant about that date, but it should give some idea of the time period this story takes place. 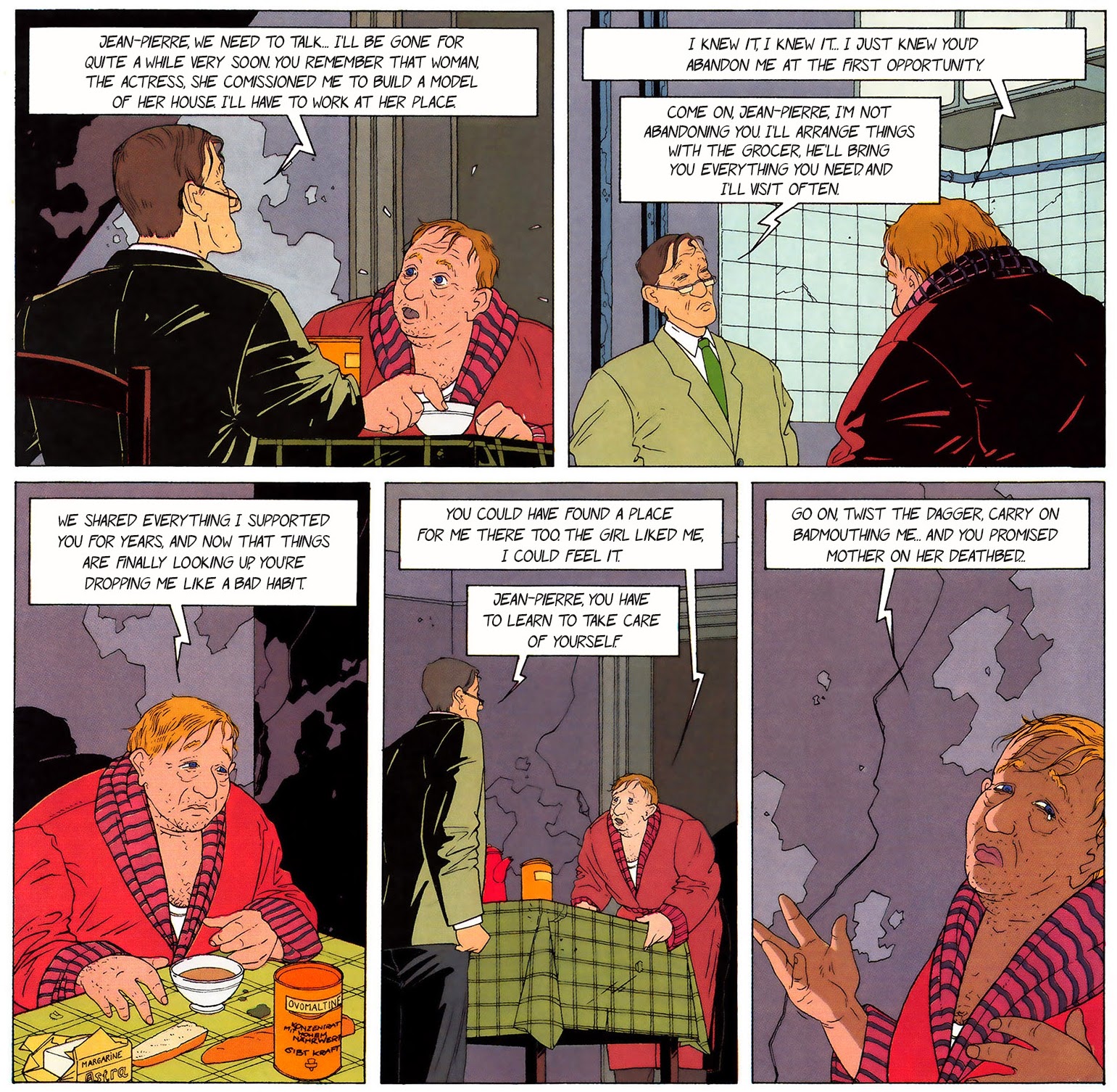 After getting a room accommodated for him, Georges gets started by taking measurements of everything in the house, from the dimensions of the floors and walls to the furniture, including the staff itself.  A lovely assistant, Simone, is somewhat taken with his obsession, and is dismayed when her affections aren't reciprocated, since Georges is so infatuated with Dolores.  Georges is grudgingly chauferred around to his old haunts where he can order the necessary crafting material he'll need to get parts small and sturdy enough to accomplish the job. 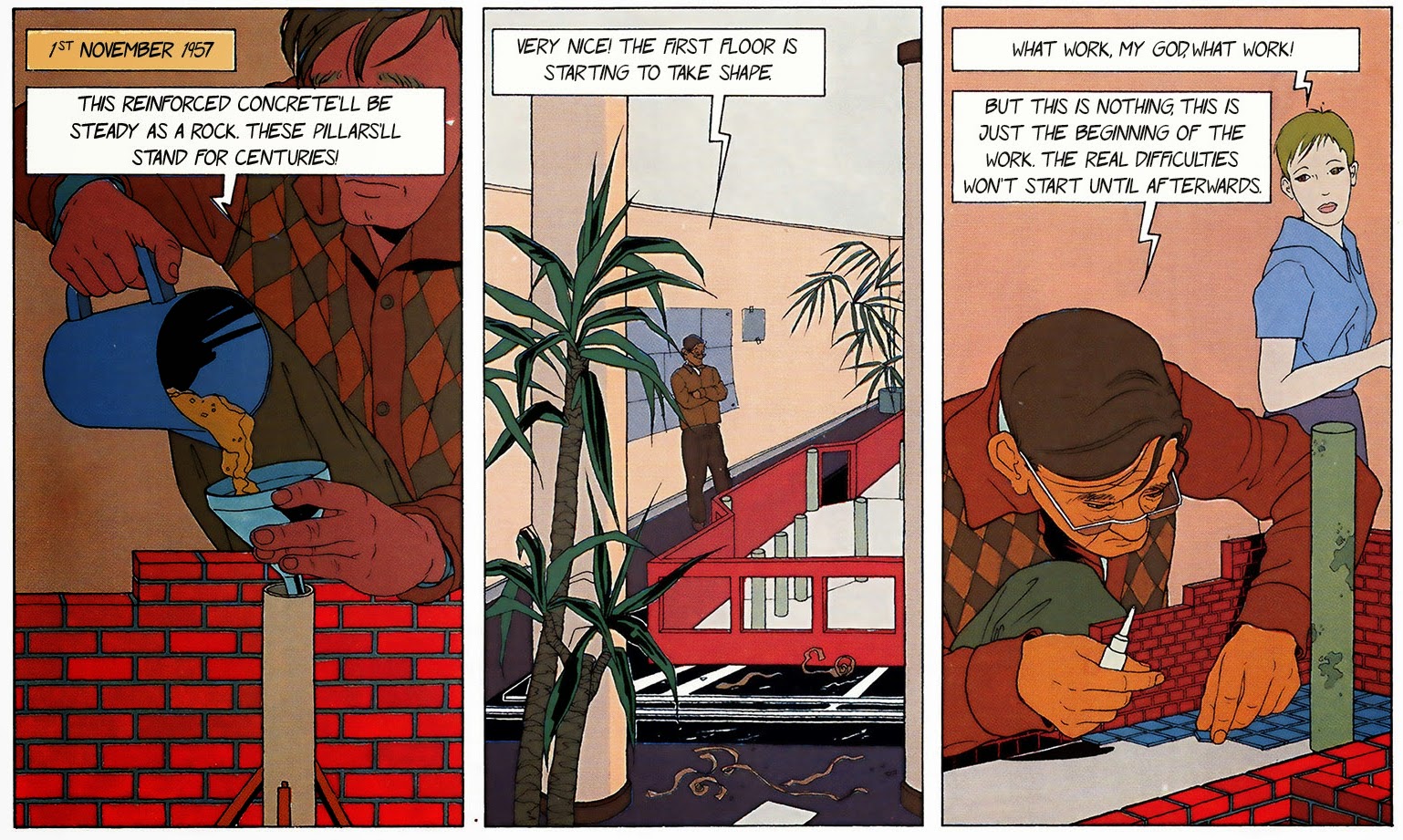 The staff don't take too kindly to the old man's intrusion of materials spread around, but since their master's not around to hear their complaints, there's nothing they can do.

After a long stretch of absence, Dolores finally comes back to Paris with a Papparazi entourage, and declares that she's relieved to be home again, and is tired of travelling.  She wants to live a less hectic life instead of running around all the time, and doesn't want to leave ever again.  When she runs into Georges, she briefly introduces him to her male co-star and then continues on with her grandstanding. 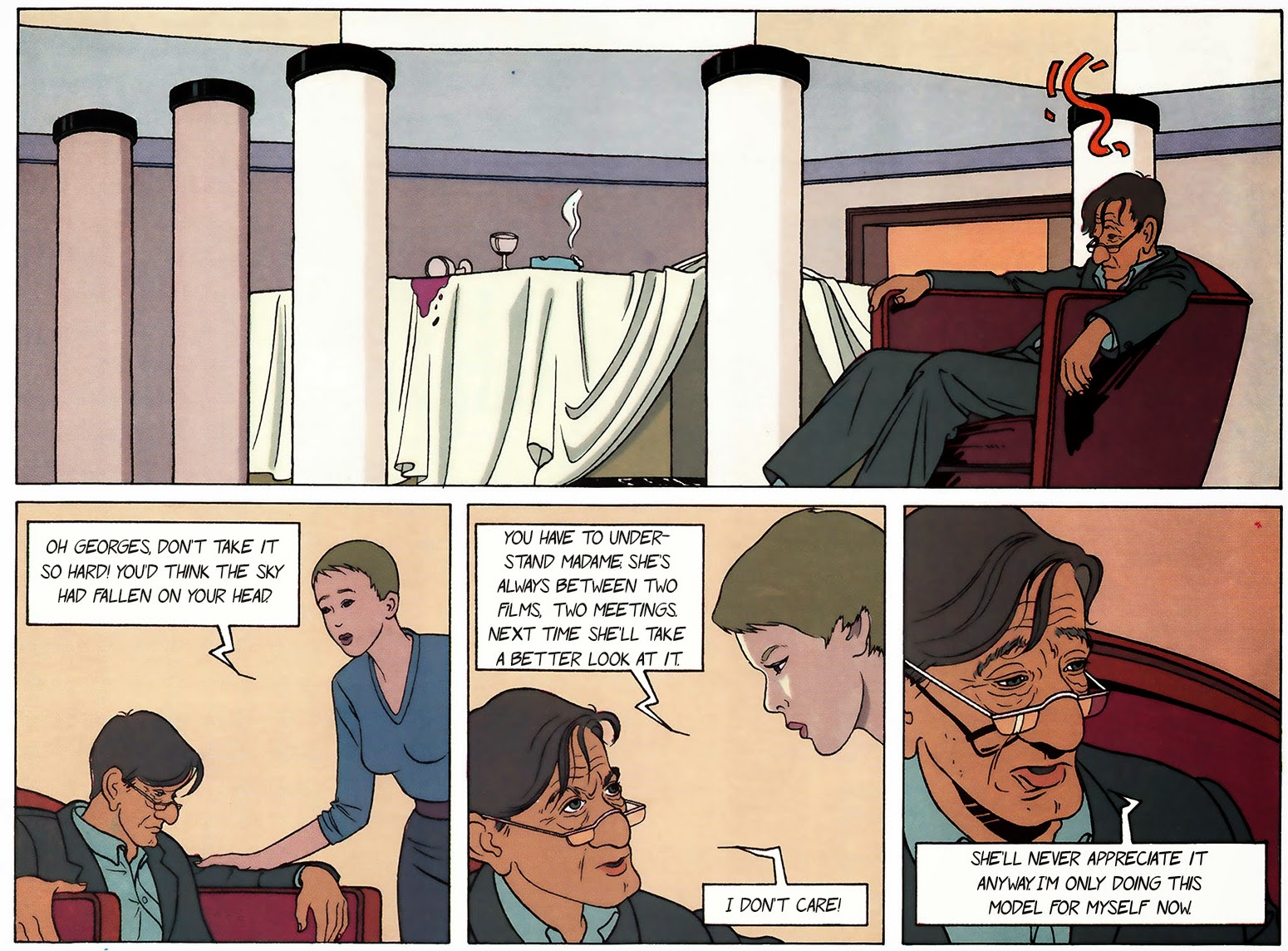 Georges is despondant at being so casually brushed off, but vows to continue working on the project, forsaking all else.  He barely responds to news of his brother's living conditions, and only pays a cursory visit to the hospital after his suicide attempt.  The house is all he has to live for now.  While being unexpectedly interrupted, Georges drops his exacto knife on the model, causing small but insignificant damage. 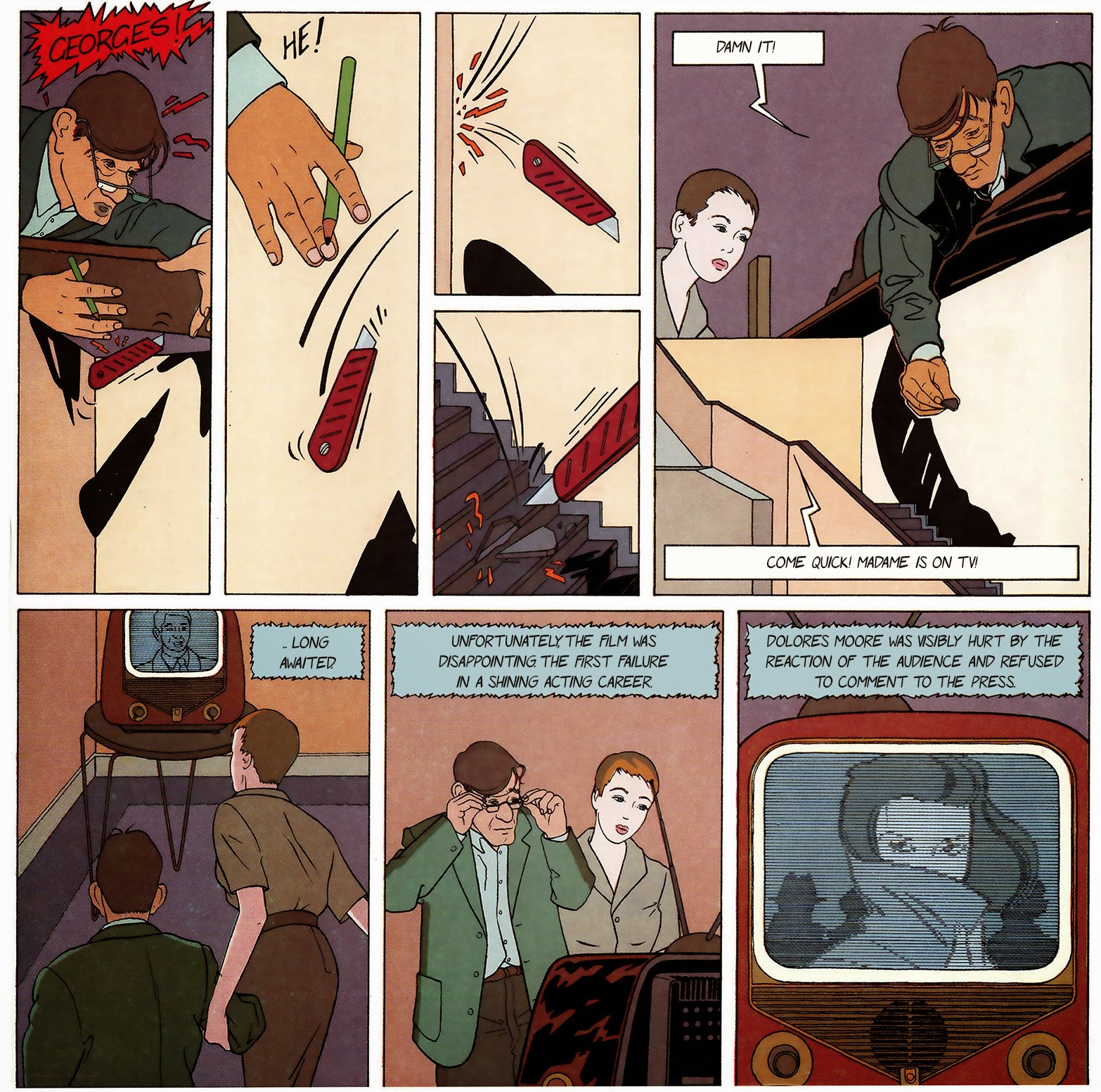 Somewhat relieved at her movie becoming a bomb, Georges illogically reasons that this means that Dolores might come back.  Later that night, while getting some more supplies for the model house, Georges almost trips and stumbles on a loose piece of concrete. 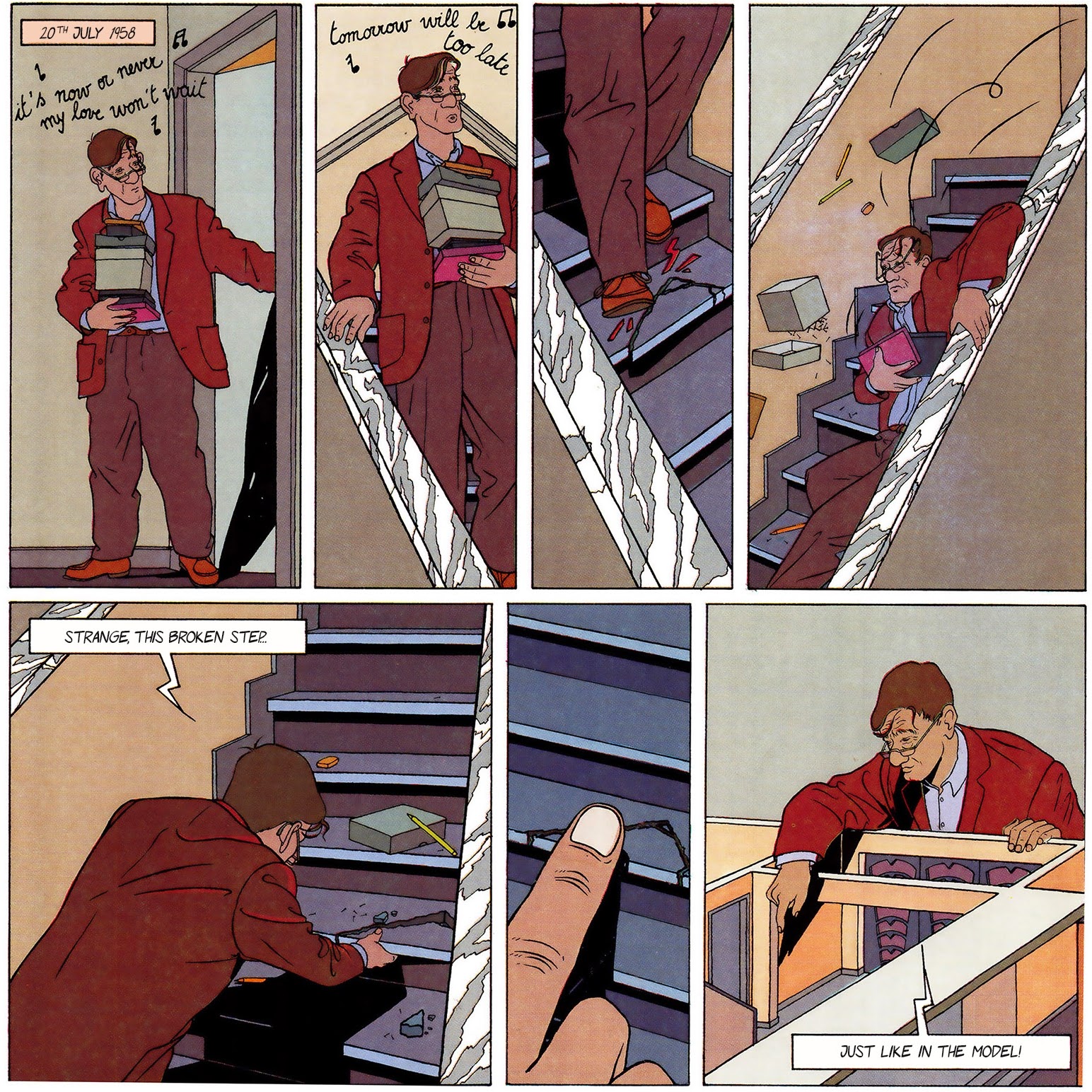 Georges curiously notices that there's a similar crack on the stairs.  Not just any particular step, but the exact same spot where his exacto knife fell.

While Georges was labouring over his new model, his brother wound up having a hard time living by himself, and died soon after.  While attending his brother's funeral, dodging accusations that his brother died from lack of loving care, Georges runs into the same boy he gave his model plane to.  He's surprised to hear that the boy was able to make his plane fly just by adding gas to the tank.  Especially since it wasn't meant to be a working model. 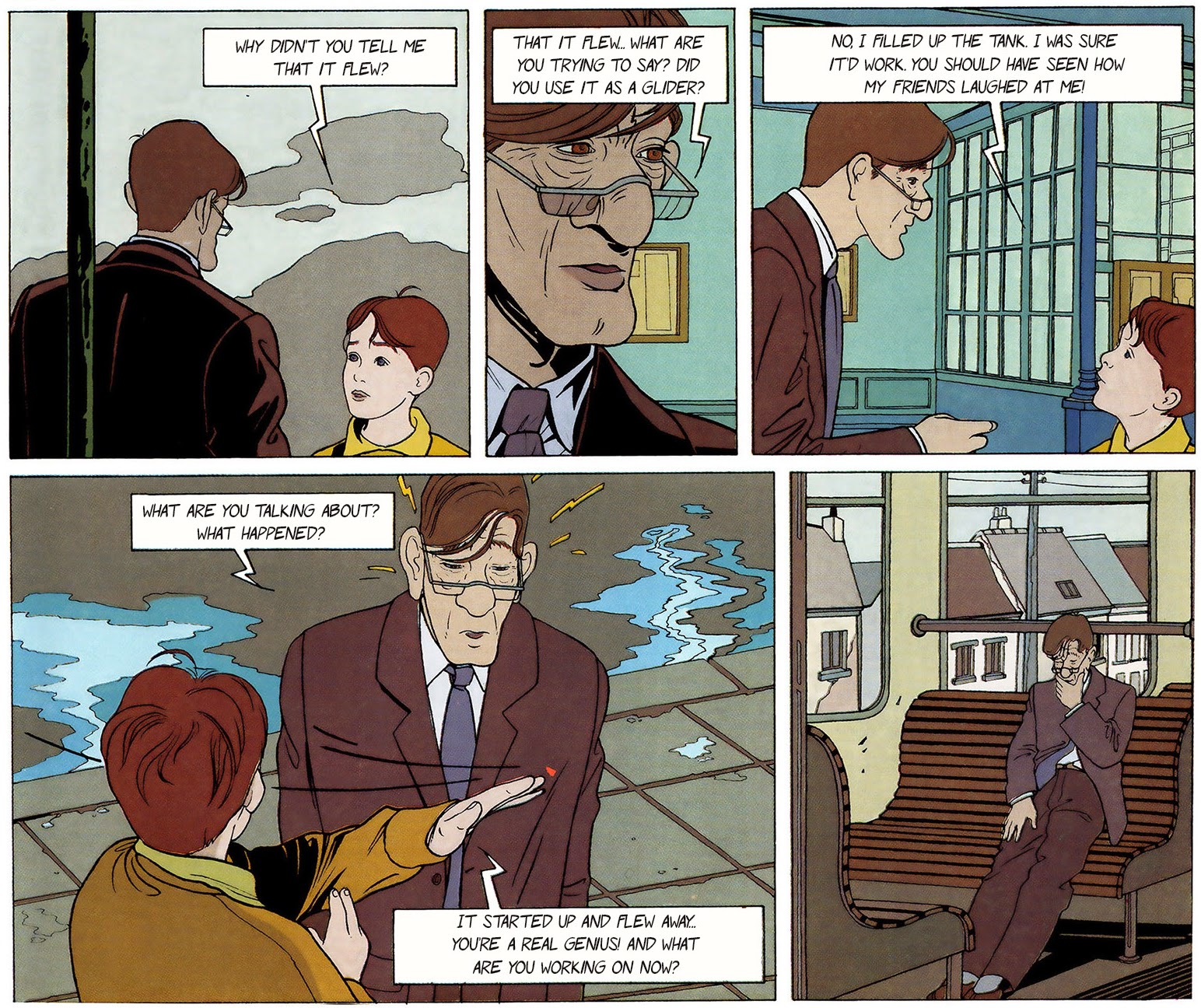 Back at the villa, Georges attempts to repair the broken step in the model, but winds up creating an accident involving glue getting over the walls.  Having already had a bad day, Georges doesn't bother to clean up the mess, and goes to bed.  The next day, Georges summons the staff to point out an elaborate prank involving a blotch appearing on the walls that's somehow exactly reminiscent of his little accident.  The staff grudgingly oblige, saying that the composition of the stain is quite sticky and hard to remove, but are satisfied once it's finally gone.  Of course, Georges is no dummy, and is no stranger to cause and effect, and wants to be absolutely certain. 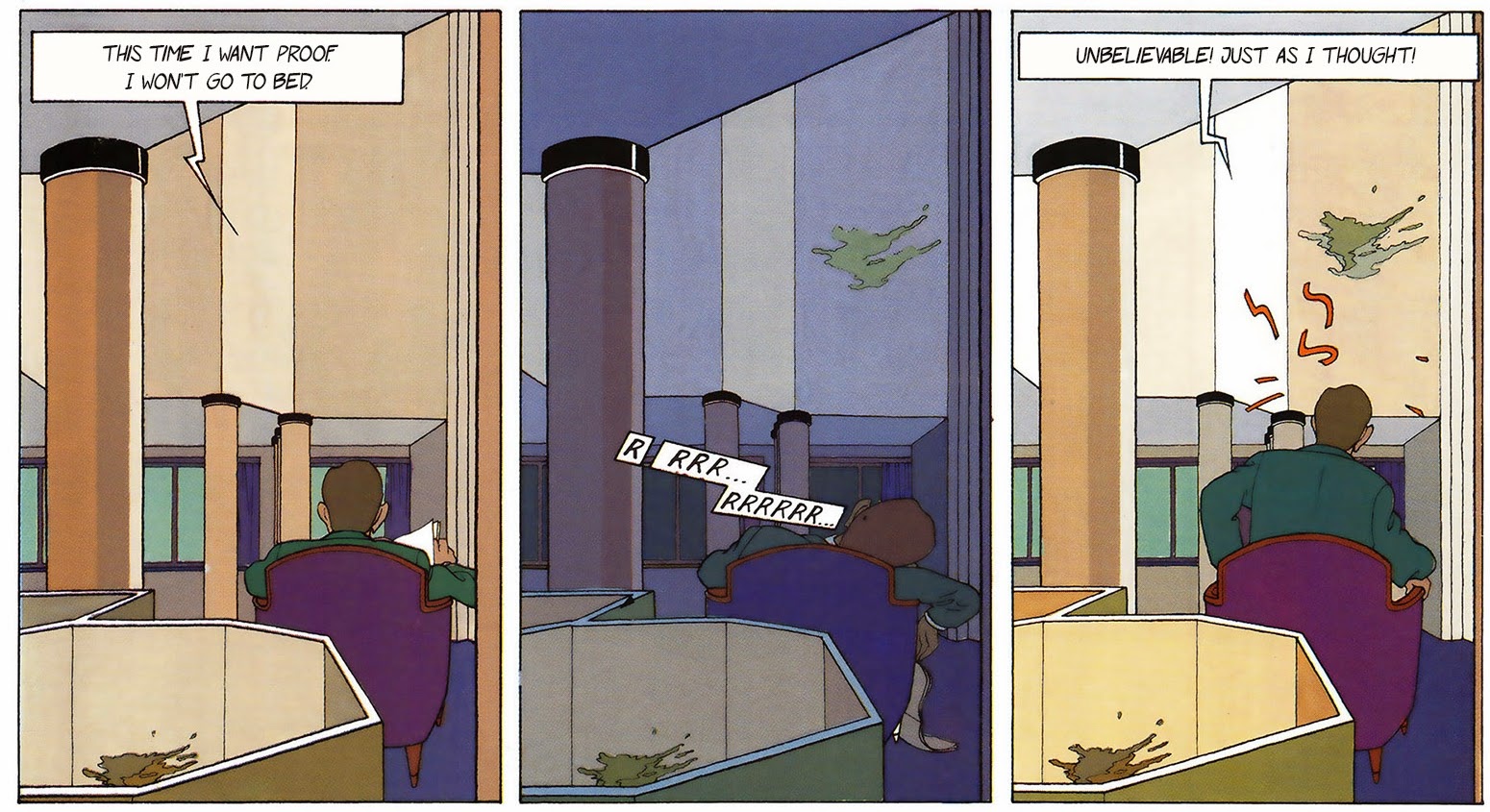 These hands!  Capable of such magnificent feats!  So what does he do once he discovers this newfound use of his talent?

Why, indulge on petty revenge on the staff who'd been increasingly frustrated with his demands.  The chauffeur is plagued with a blueish tint on his face that won't go away. 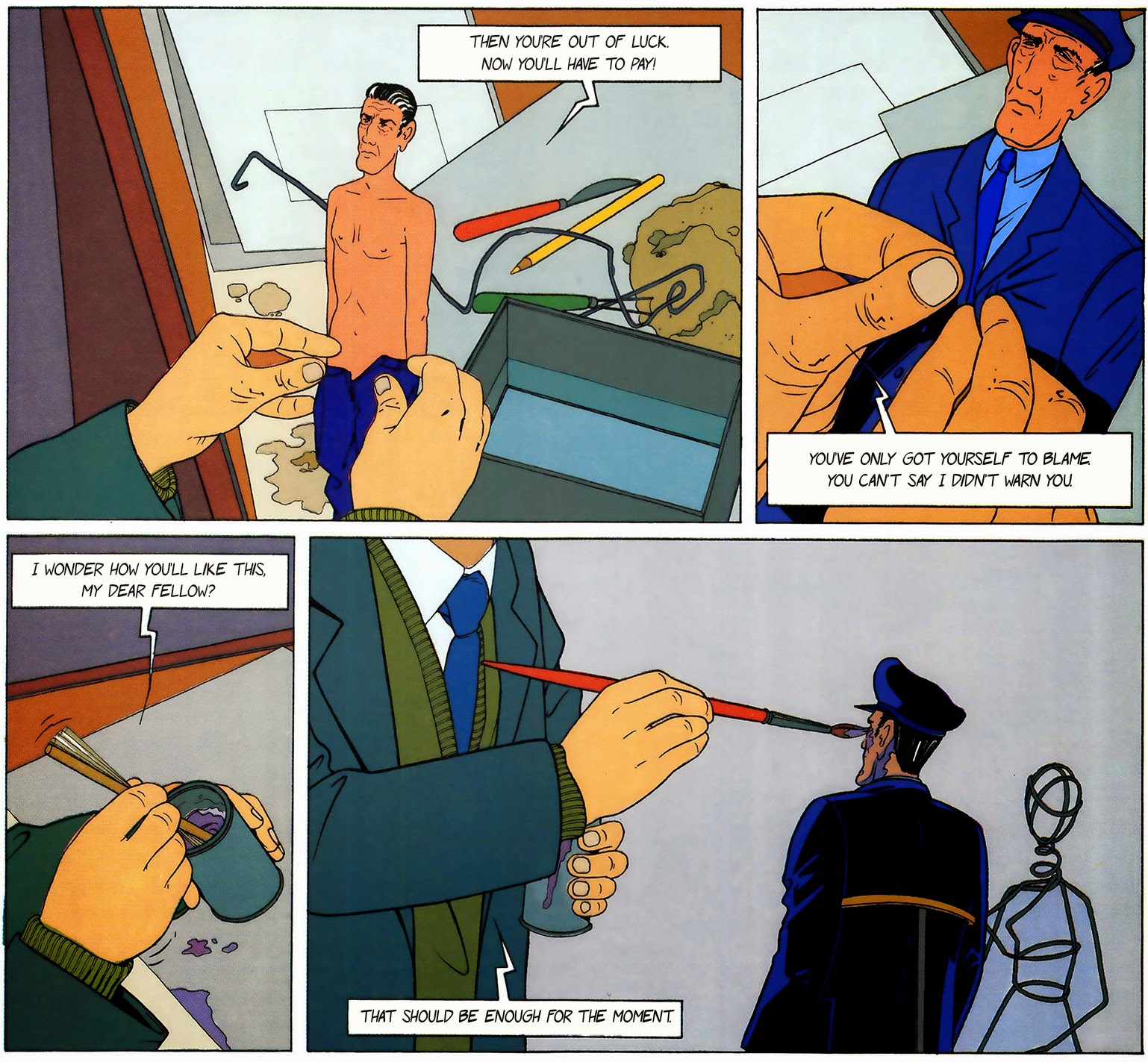 And that's just for starters.  Georges goes to the trouble of getting rid of a lovely assistant Simone who was dismayed at rejected her advances in favor of the unobtainable ideal of a film star.

Georges goes so far as to create a doll of Dolores who he pays lavish attention to.  He strips the doll naked and puts it in the miniature bathtub with water and scented oils, and mere minutes later, Dolores shows up in a bathrobe.  She still rejects Georges advances, but the fact she showed up like that at all doesn't bode very well for controlling her own actions. 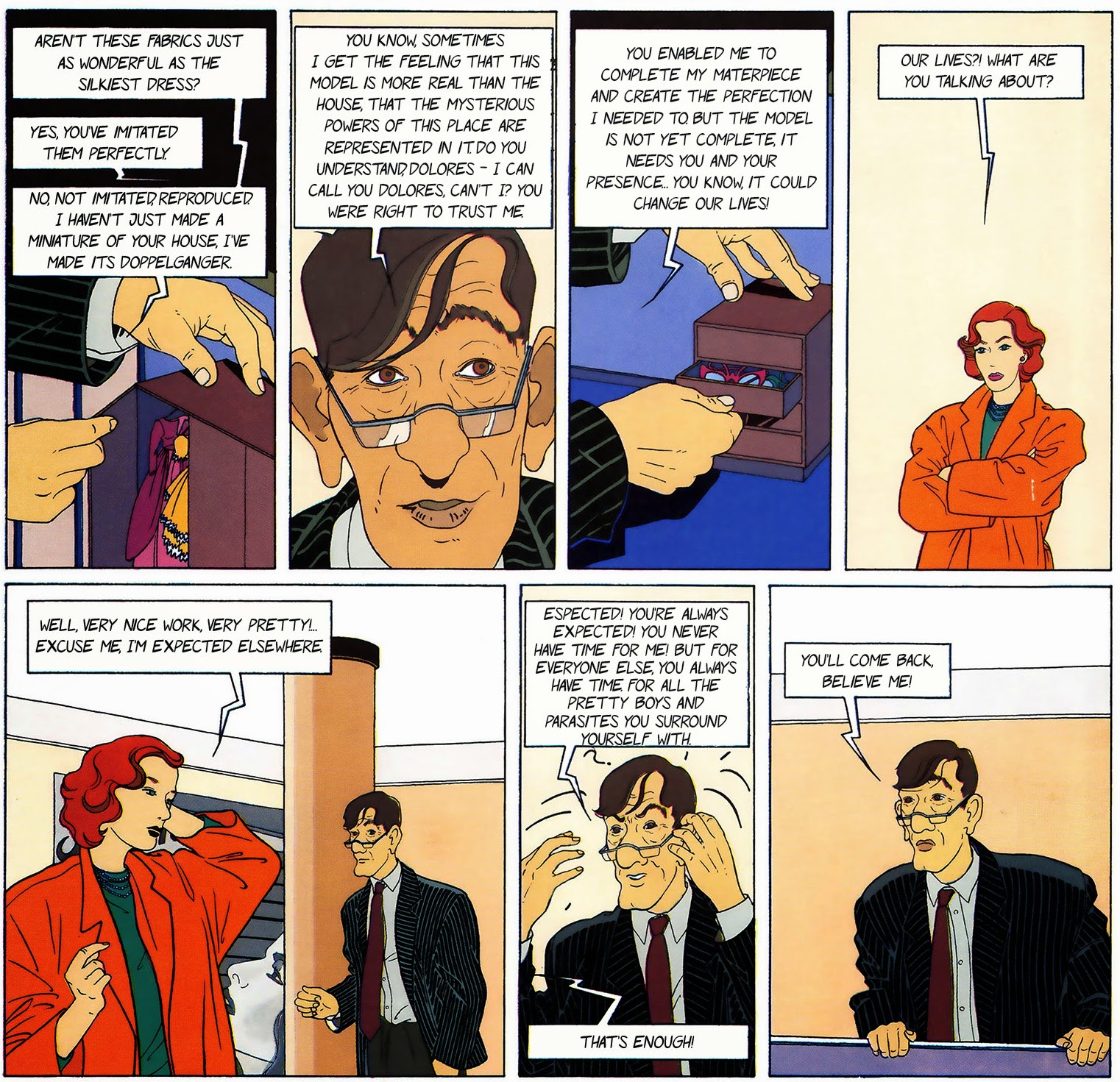 Georges has now taken power of attorney and the part of Dolores' manager and refuses any calls aimed towards her, saying she wishes to be left alone, and wants nothing to do with movies anymore.  Especially since she feels personally threatened by a rising talent named Marilyn Monroe.  Georges reasurres her, saying that she'll always be beautiful in his eyes, but it hardly sounds reassuring to her, coming from him. 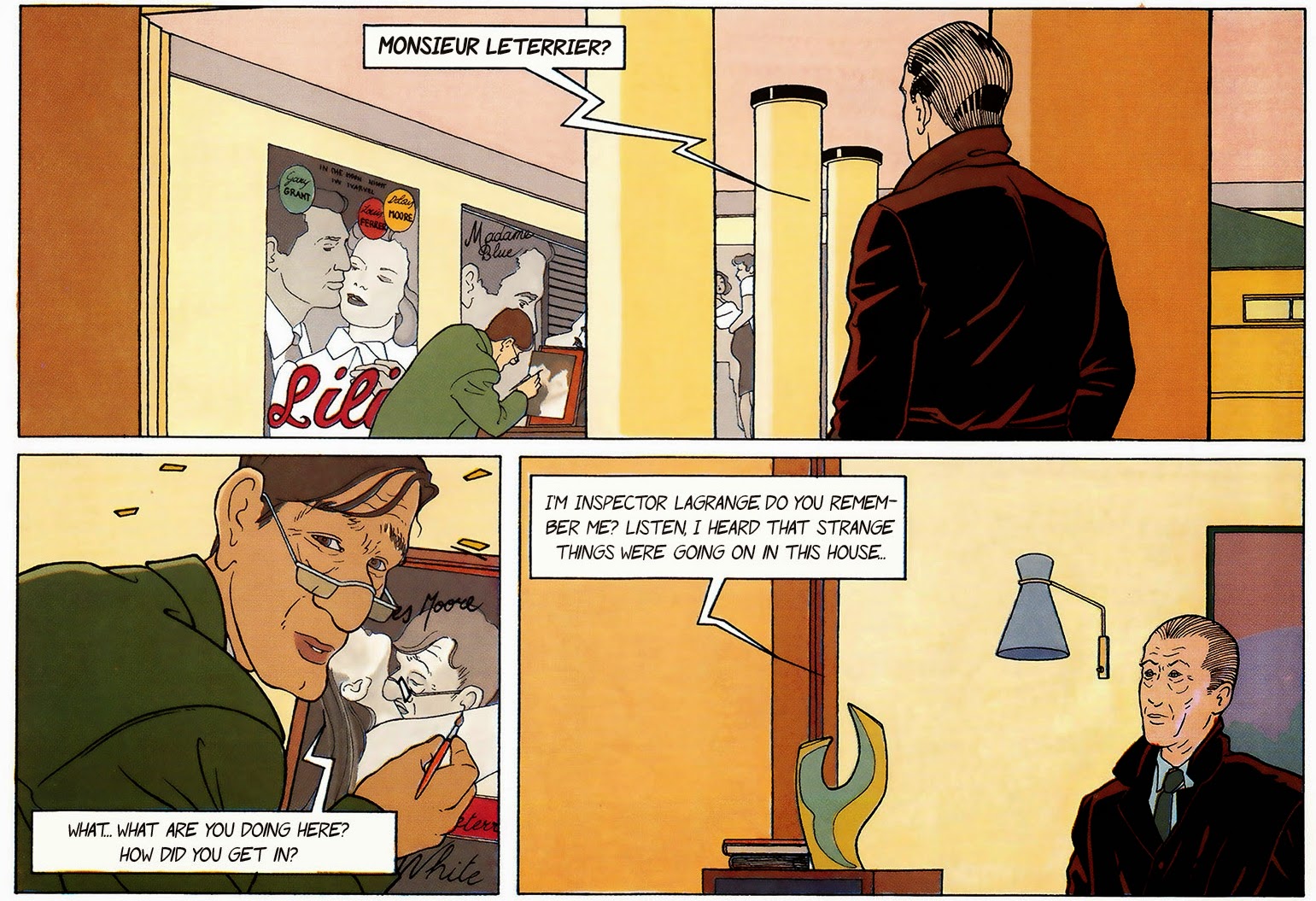 Georges is confronted by a policeman who'd heard strange testimony from a hysterical witness, and decided to do some following up, even though the chances of finding a lead is rather unlikely.  If there is a glaring weakness to George's powers, it's that he can't directly influence events that are outside of the house's dimensions. 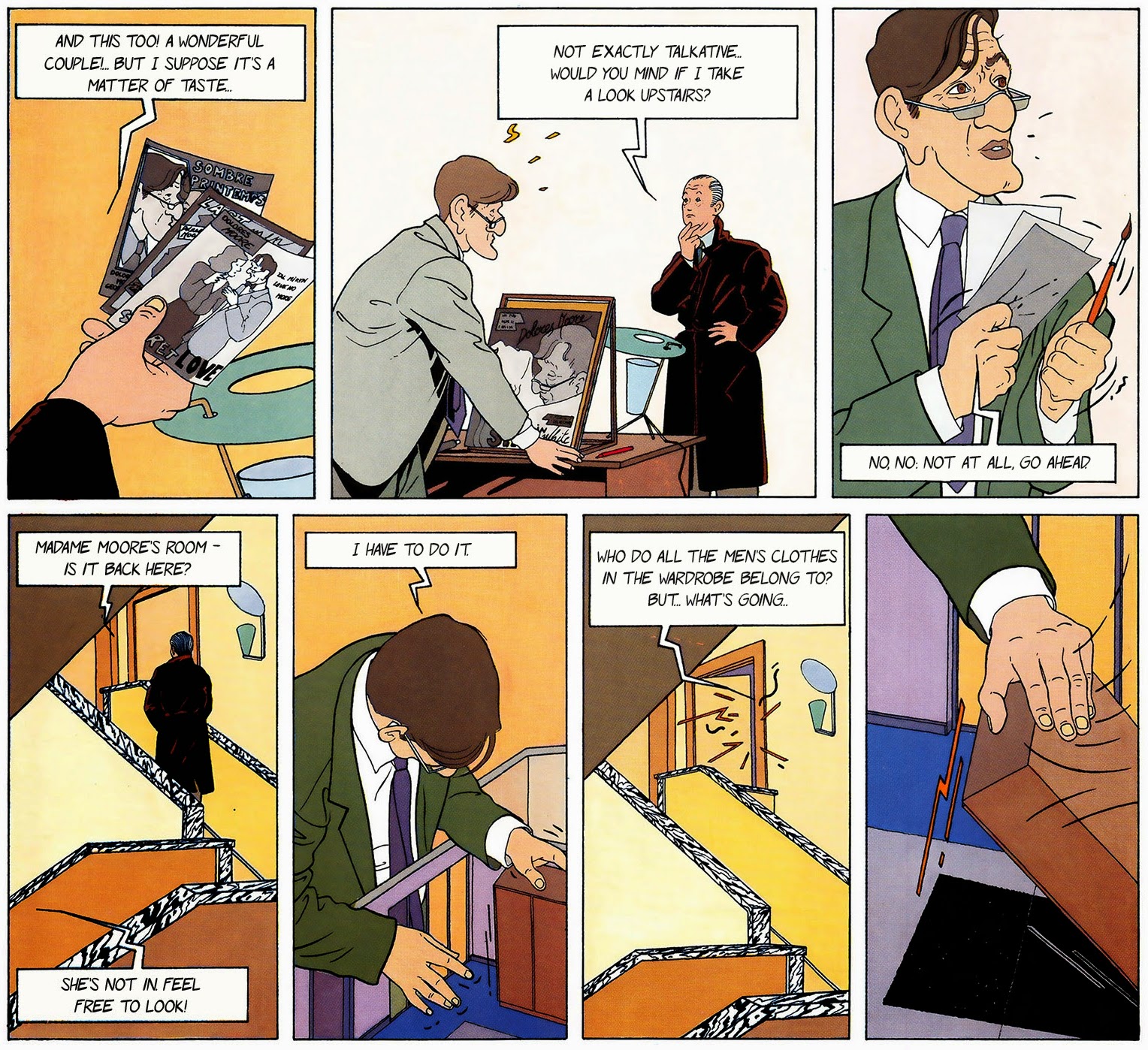 Of course, if outside elements happen to be within the confines of the house, then he stands more of a chance. 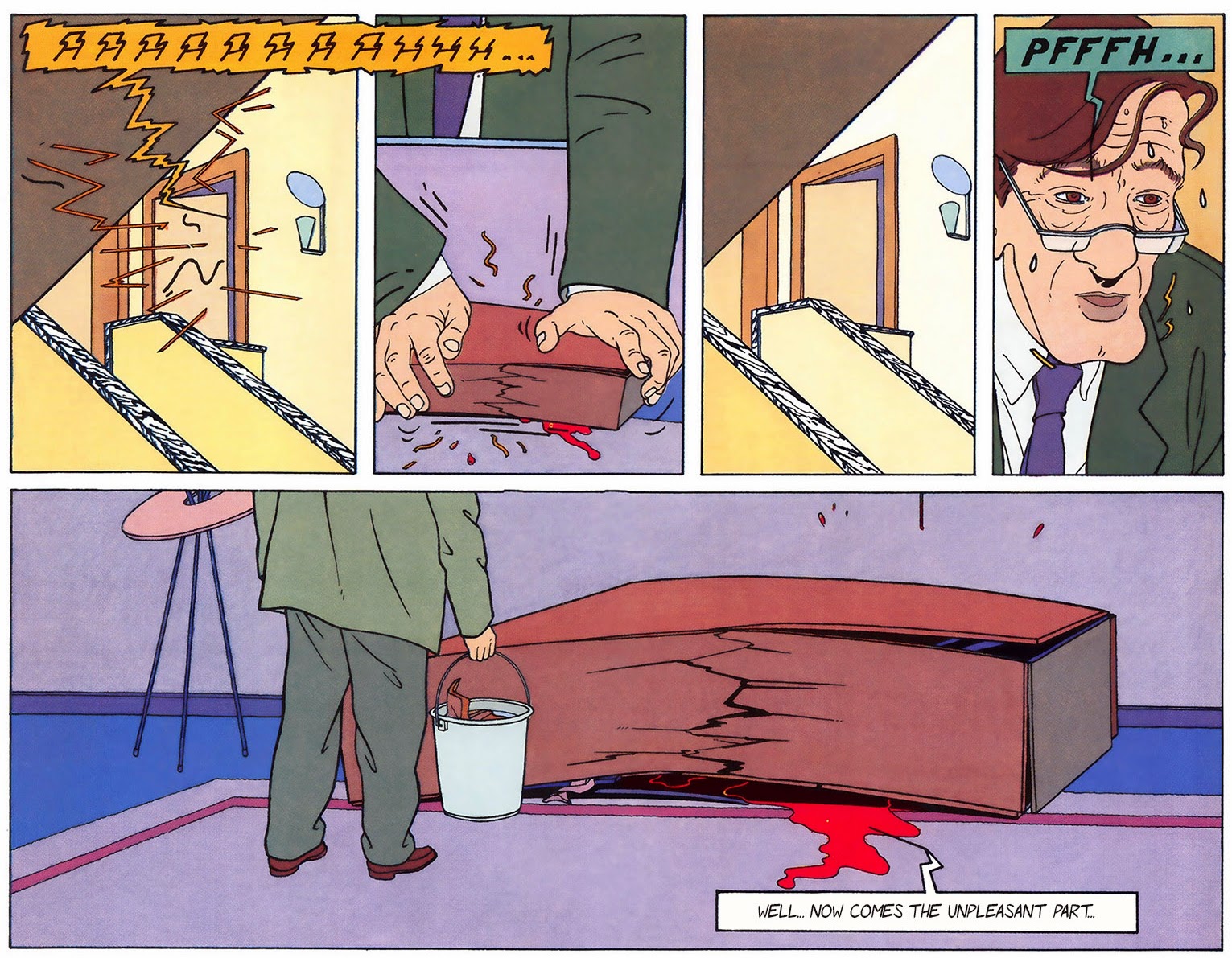 Presumably, he cleaned up the bloodstains in the model later, otherwise they would be impossible to remove entirely.  Inspection of the glue stain on the wall showed that it took some time for any changes in the house itself to become reality, so chances are he could afford to take his time. 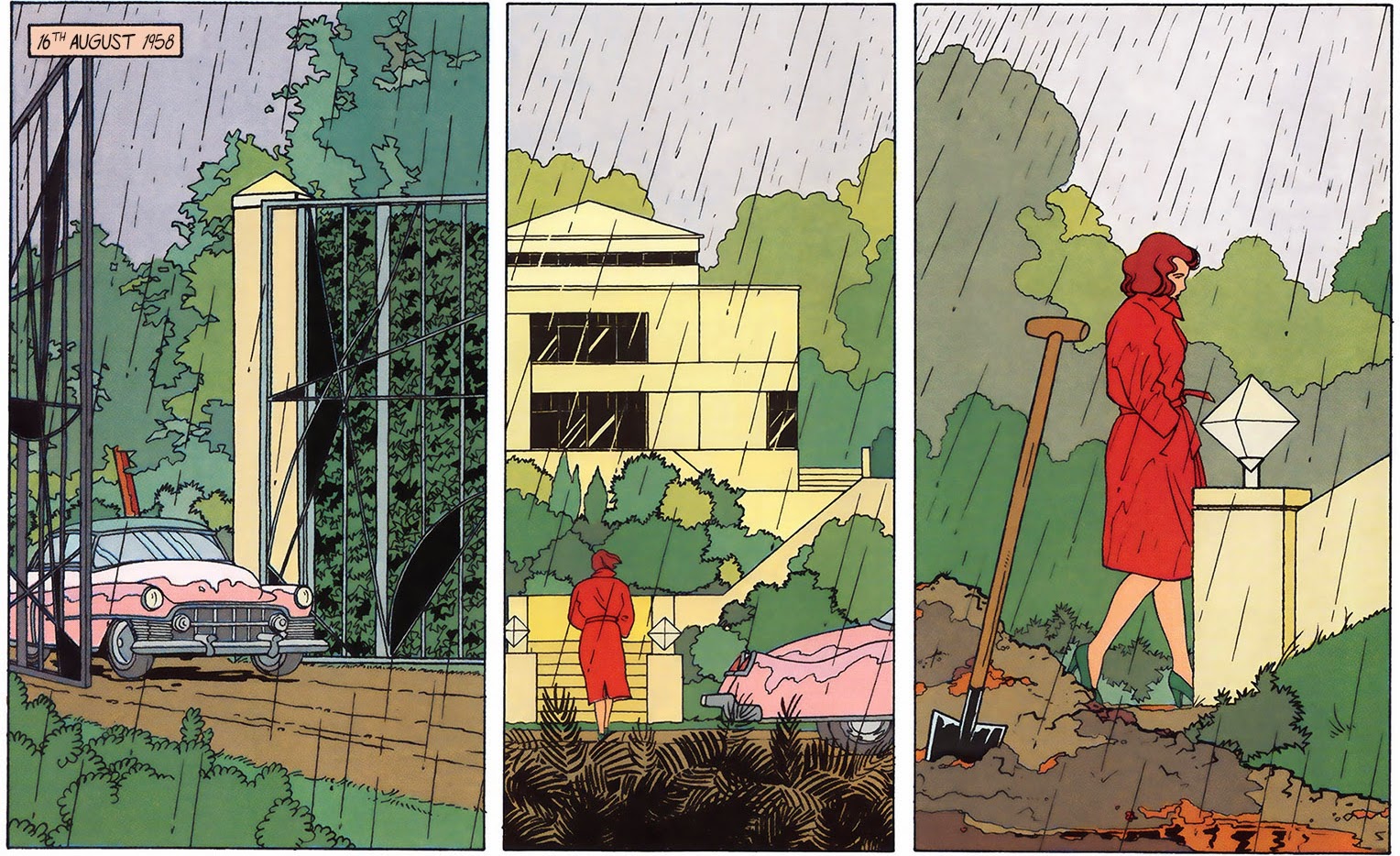 Unknowing about this recent descent into murder, Dolores is so upset with her new life that she doesn't even notice the spot of upturned earth on her front lawn.  When she comes in, she sees Georges dancing with the doll version of herself. 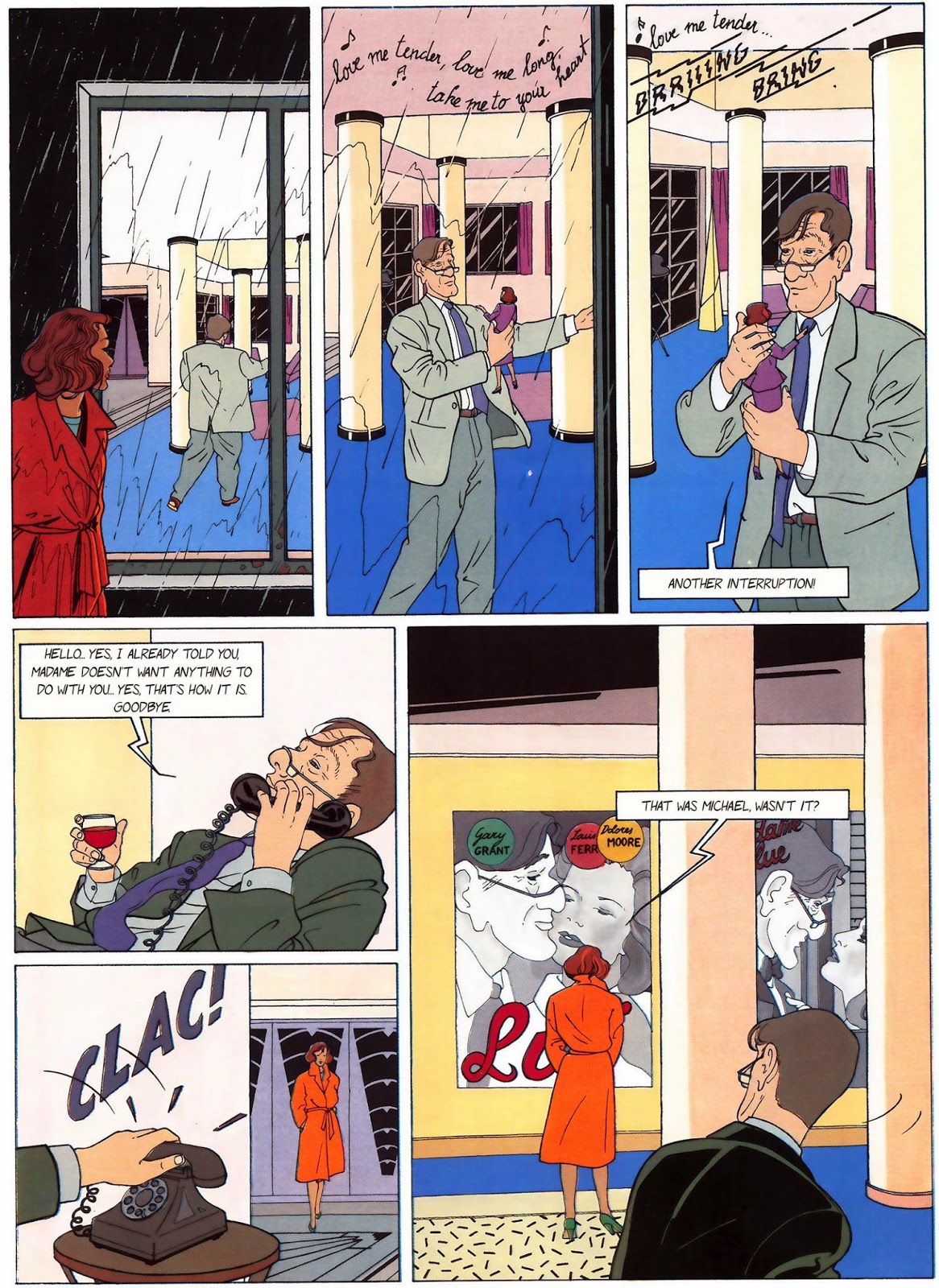 Delores is dismayed at all the changes that's taken place.  She's willingly followed Georges demands in order to accommodate his needs for completing the model house, which she sorely regrets now.  The last straw is all these movie posters with his face transplanted in place of the male leads.  Dolores isn't terribly amused by all this, and goes about tearing the posters apart with a pair of scissors.  Georges tells her it's useless, and sure enough, the posters are back to normal, much to her amazement. 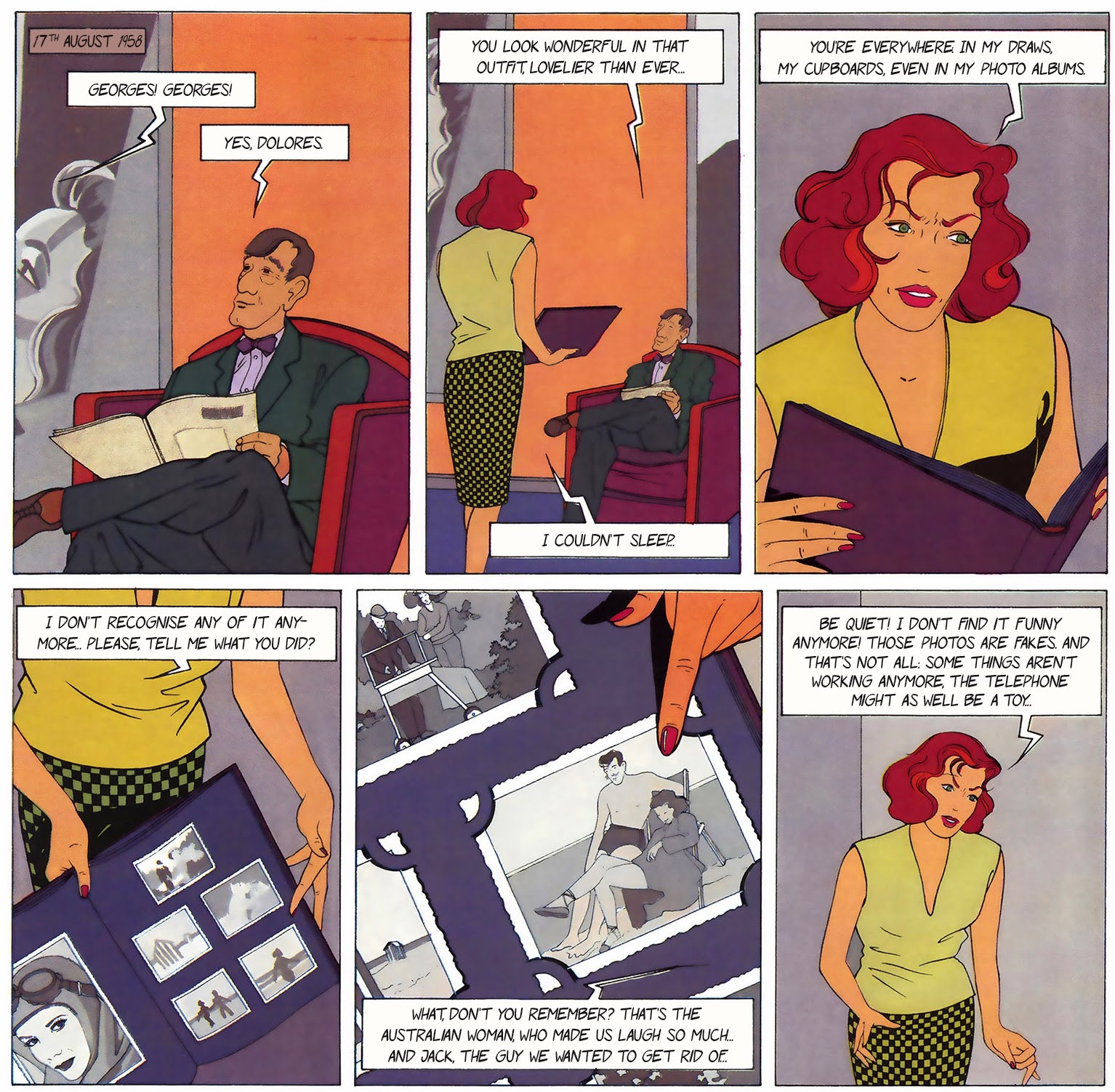 Dolores finds it increasingly difficult to think clearly, especially since Georges has gone to the trouble of modifying her past so that he's more of a presence than the other actors she's been with. 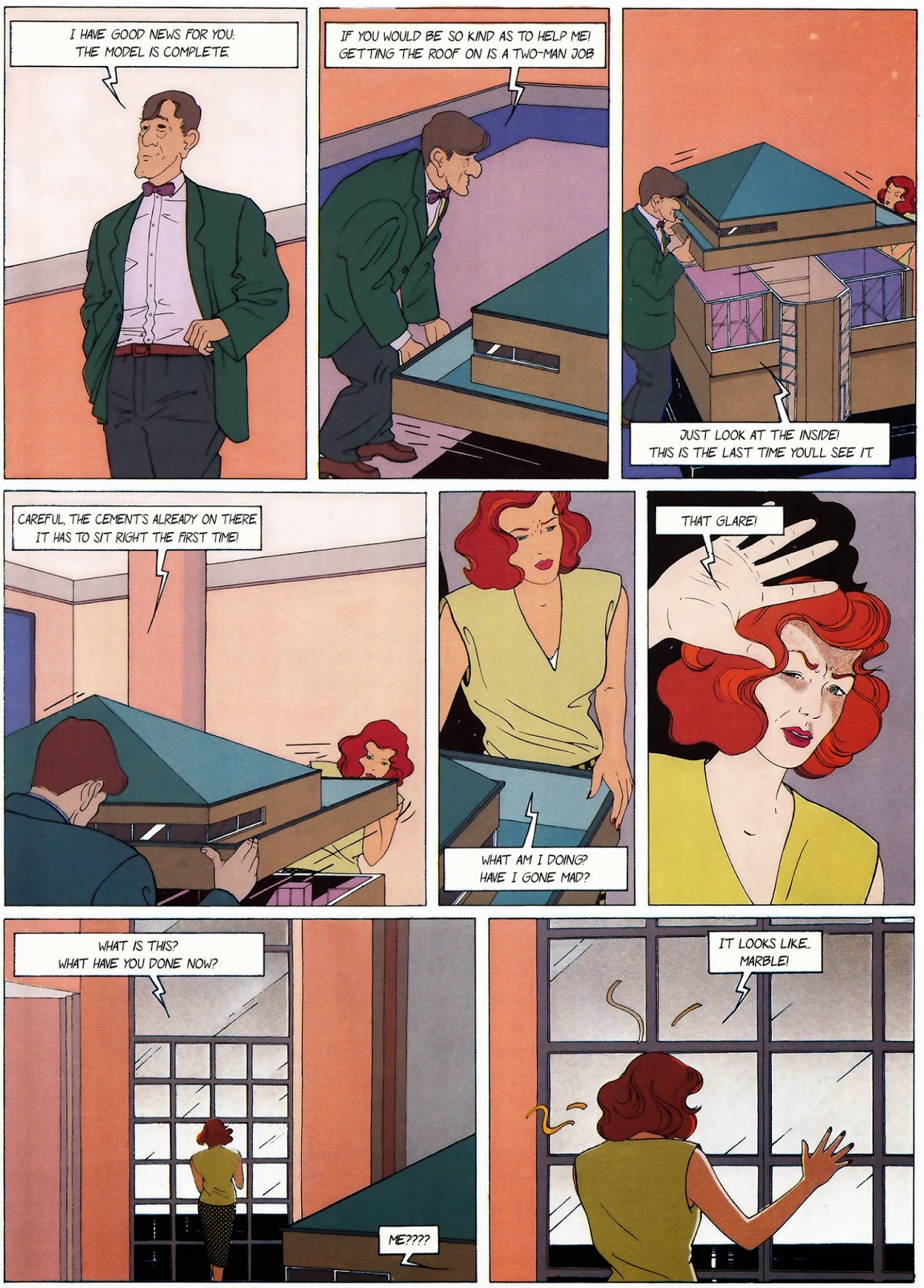 Shortly after helping put the final piece together, Dolores notices that there's something strange about the outside now.  There's no clear vanishing point of the horizon. 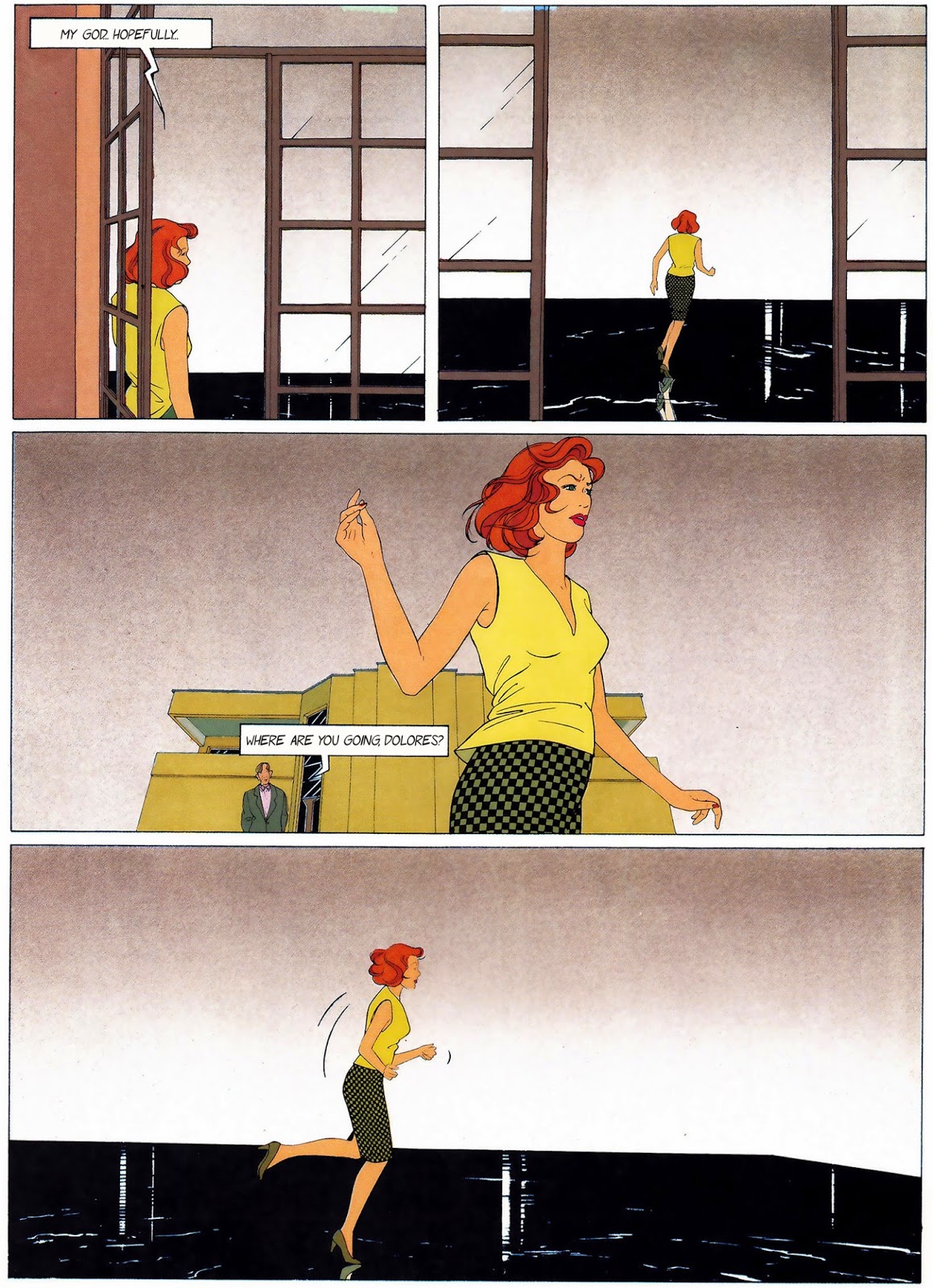 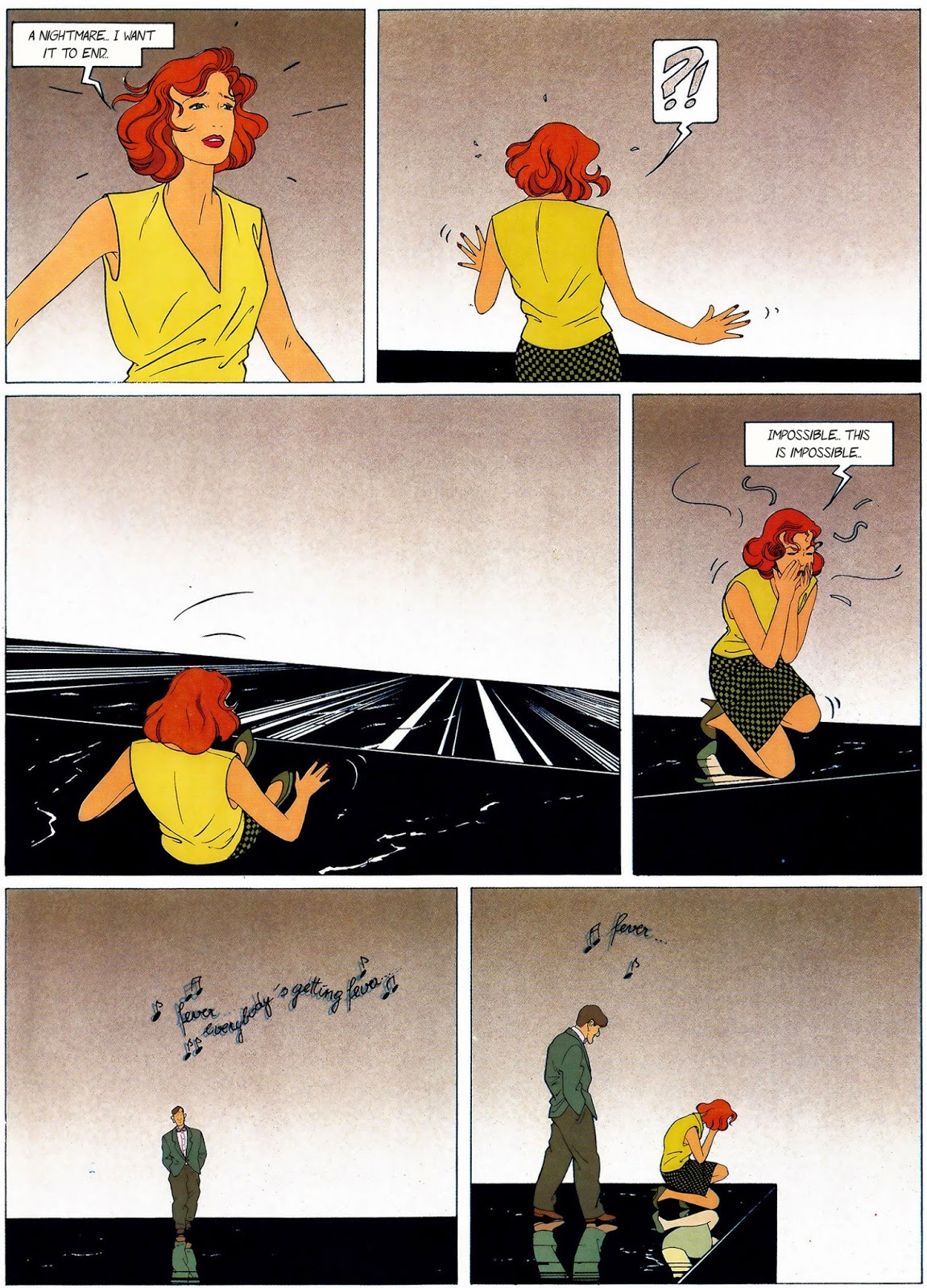 Georges just calmly walks up to Dolores, singing the theme song from one of her movies and helps carry her back to the house where the two of them will live from now on. 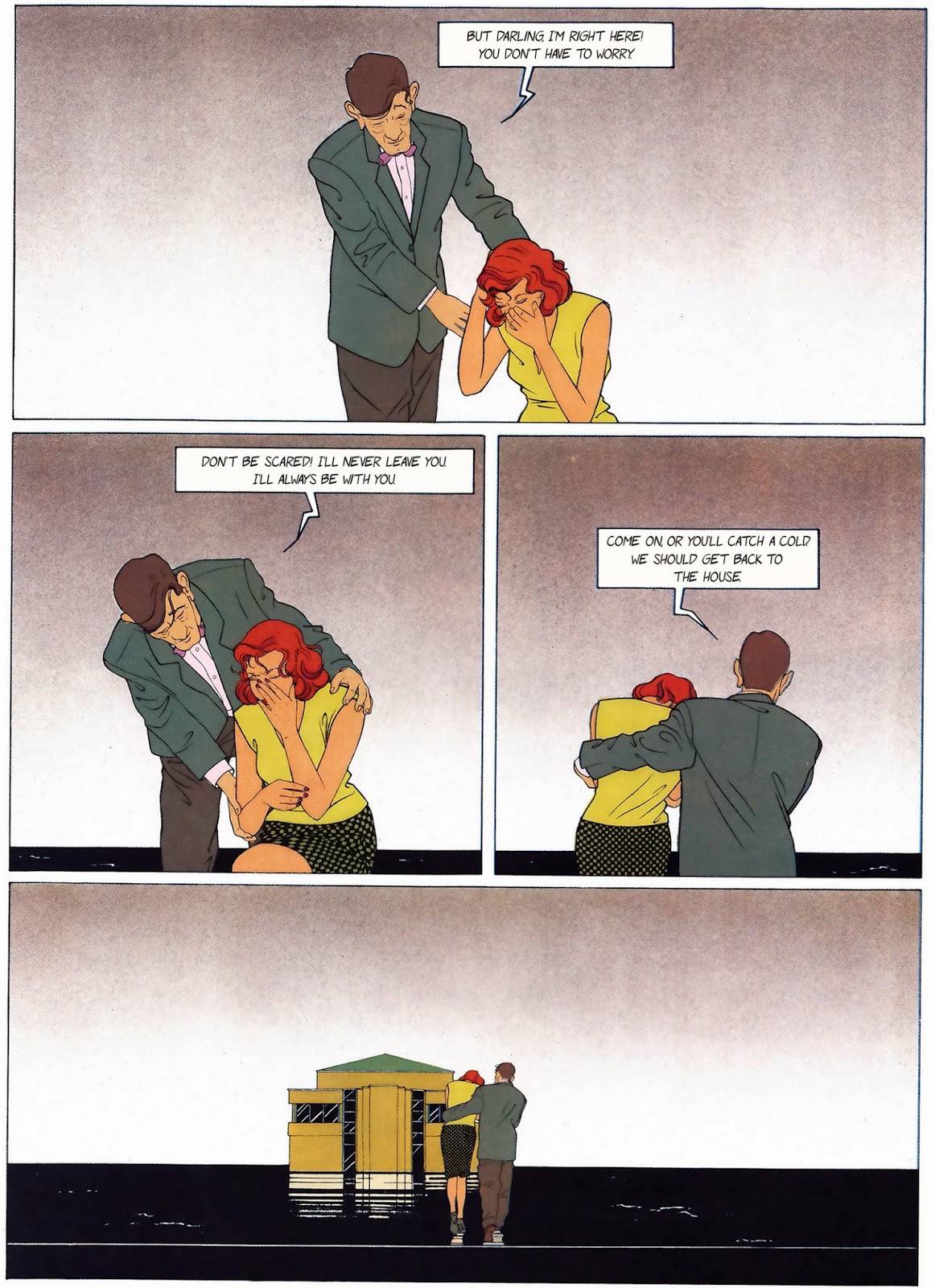 To recap:  after systematically removing her closest servants and friends, including indulging in casual murder
as well as denying her right to pursue her career, Georges is now in a position where he has full power over her every action, and can control her waking thoughts.  If that isn't truly frightening, then I don't know what is.  It's like the bad ending to Henrik Ibsen's A Doll's House.  It's also a chilling take on the old adage that if you work long and hard enough on your dream, you'll be rewarded for your efforts.  The skeevy cover doesn't help matters much either. 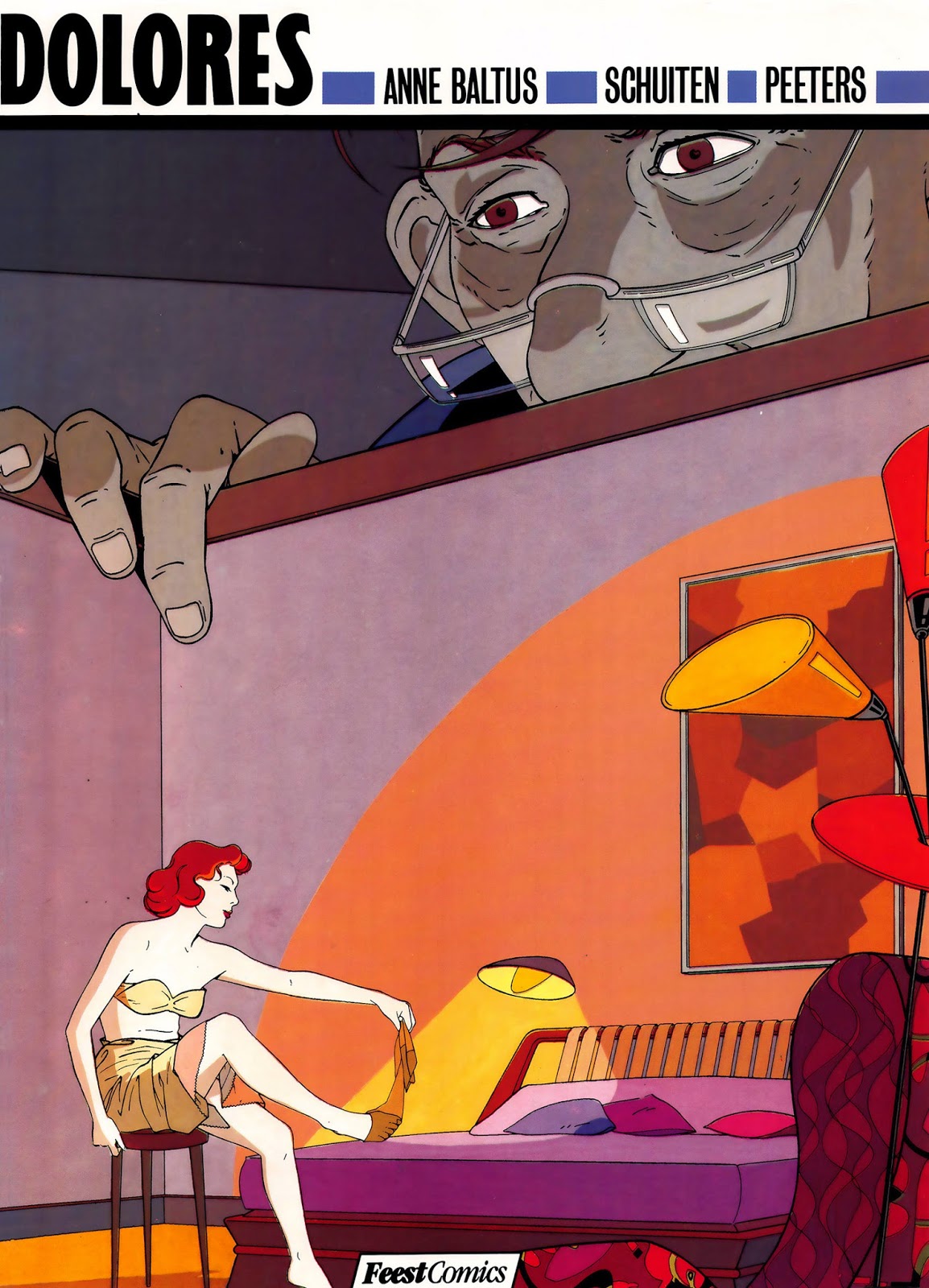