The Road to El Deafo

This was something of a pleasant surprise.  I was browsing the comics section of a bookstore, and came across this title that I'd received no notice or advance previews on any regular comics newsites, and upon reading the first thirty pages, bought it practically on the spot - something I NEVER do for anything I haven't previously read elsewhere.  That goes to show how strongly the subject material affected me, even though I have little to no interest in Deaf culture, despite being deaf myself.

In case you haven't guessed by now, the theme is an autobiographical book of early onset deafness by Cece Bell (Which sadly, doesn't rhymes with Decibel, but would've be fitting if it did.  Ironically, the name means Blind in Latin)

Obviously, there are different parallels between Cece Bell and me, but it's not meant to be a reflective perspective of every deaf person out there.  Just as the Cracked tagline for the movie parody BeagleJuice goes, "If you've seen one ghost, you haven't seen them all."  By that similar token, if you've met somebody with Asperger's Syndrome, you've met somebody with Asperger's syndrome. 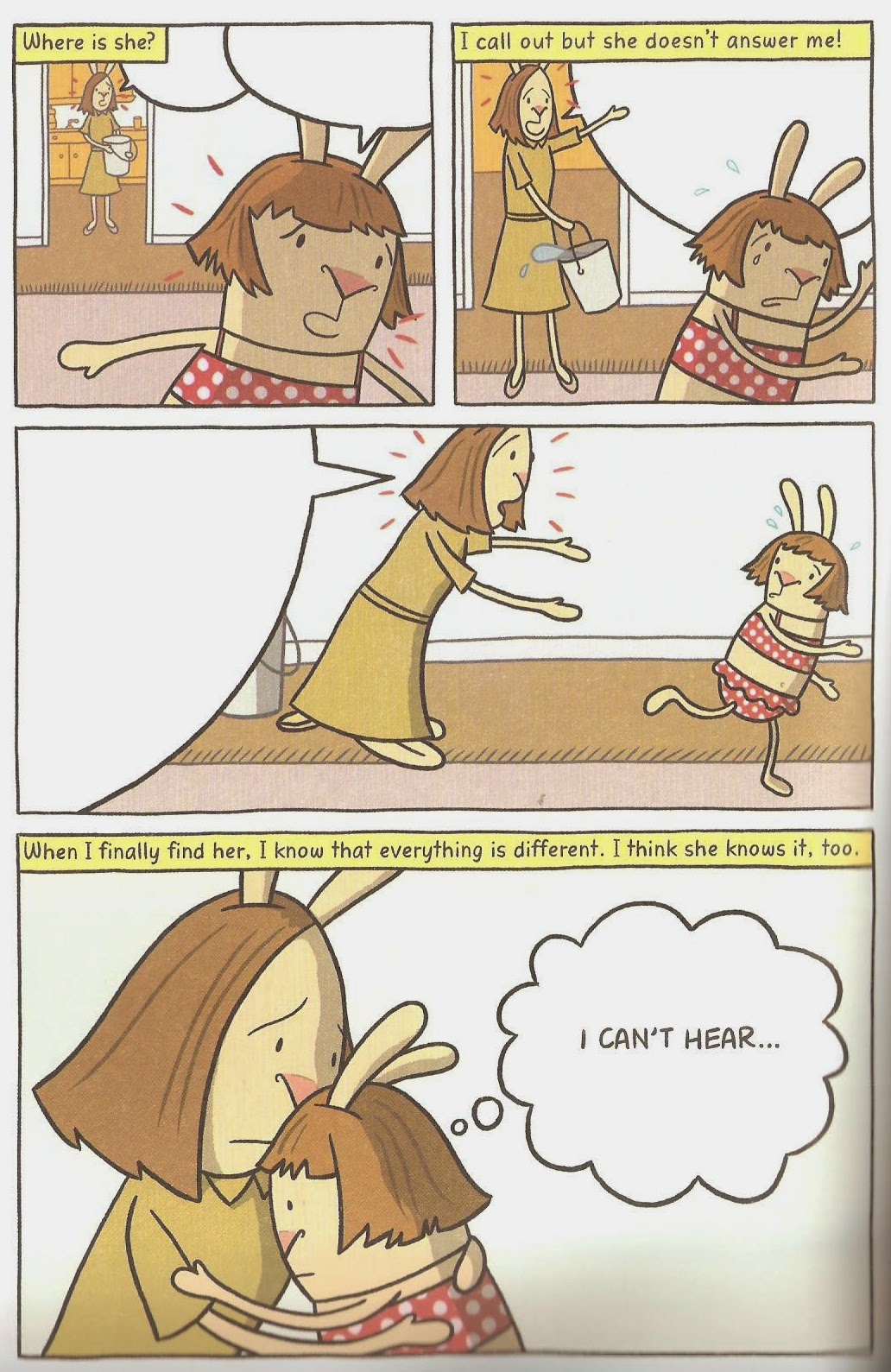 Cece Bell lost her hearing not via birth, but from the aftereffects of contracting Meningitis at the age of four.  During her stay at the hospital, she contracted terrible headaches, and after awhile, noticed how QUIET everything was afterwards.  She didn't think much of it afterwards, and it took awhile for her mother to notice that something was wrong.

Early intervention is crucial when it comes to combating the effects of early onset Deafness - the longer you can't hear, the harder it will be for newborns to get used to hearing.  A babysitter noticed that I didn't seem to be hearing properly, but didn't tell my mother, out of respect of not wanting to stir any troubled waters by pointing out the obvious.  As a result, I wasn't properly detected and diagnosed until a month later.  Nowadays, babies are tested to see if they show signs of deafness, but that's still no excuse for being accommodating.  If you happen to notice a child displaying familiar symptoms you're aware of - don't try being polite.  Let the parents know of your suspicions immediately if they haven't said so otherwise.  They may take offense at first, but in the long run, they'll thank you later.

I was told that when I was first fitted for hearing aids, I started fussing at first, until I had the switch turned on, and then I started reacting joyfully at the new sensation of a sense I wasn't even aware existed.  Since there's no home video recording of my first hearing experience, here's the next best thing - a baby getting results from a cochlear implant, the closest thing science has to literally inputting a computer in our brains, creating a literal cyborg.

However, while Cece Bell now has the benefit of a hearing aid, she's still not completely out of the woods yet.  She has to reacquaint herself with learning how to hear things all over again, which has some unintended comical consequences. 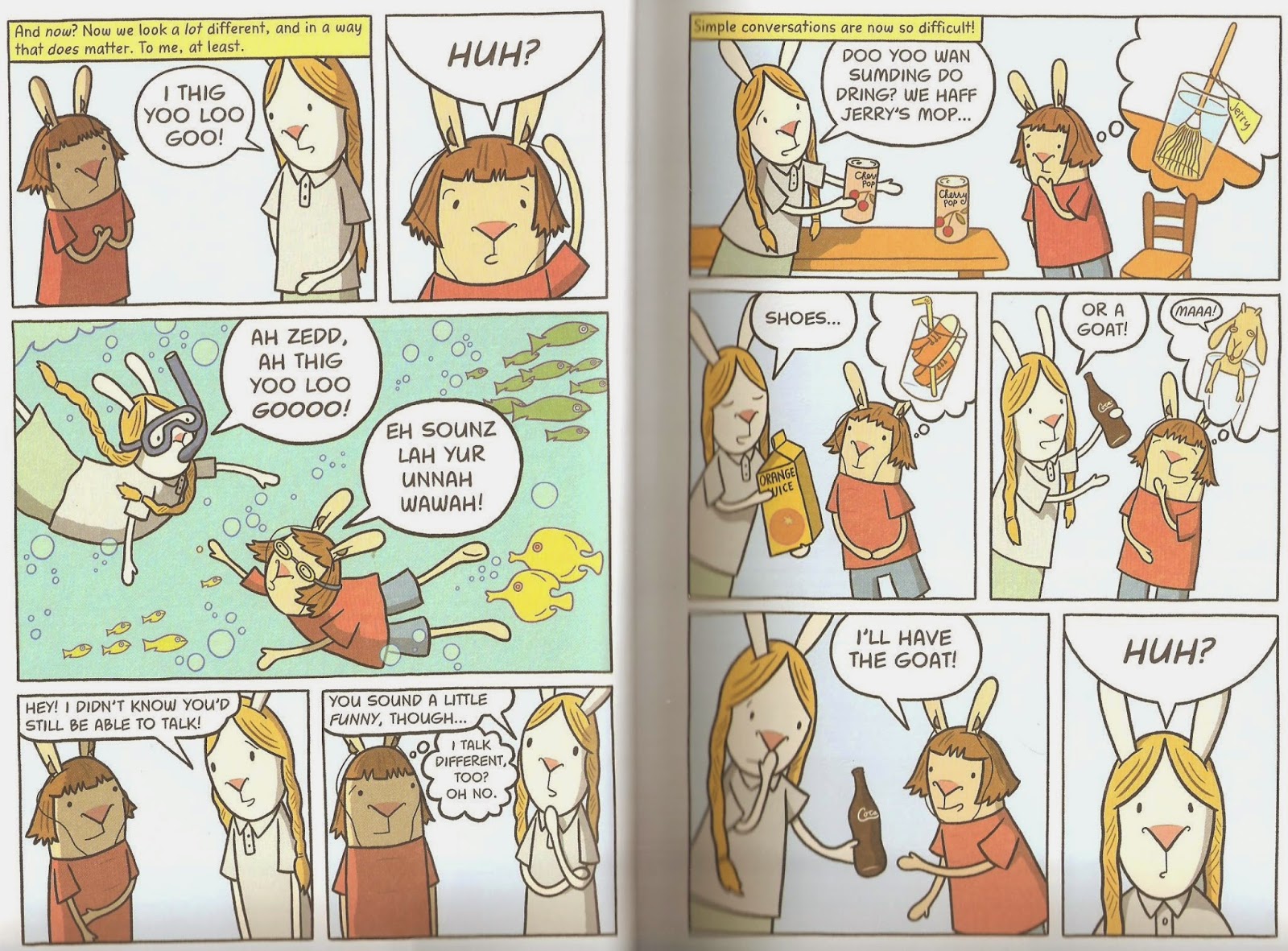 Fortunately, Cece Bell has her elementary education in a classroom with other equally deaf students, and among other basic learning skills (Math, English), also learns the rudimentary essential knowledge that is lip reading.  If you want to understand what's going on, this is a must. 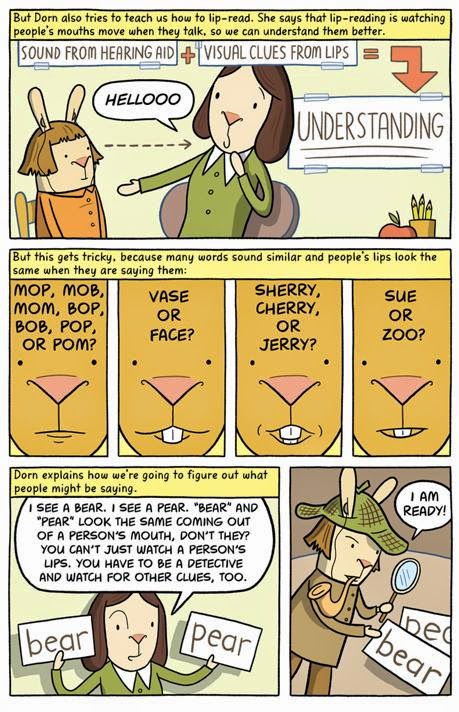 Going off on a related tangent, there was praise given to the issue of Hawkeye #19, where the protagonist suffered some hearing loss, and had to cope by reluctantly going back to using sign language to communicate with his brother.  An attempt was made elsewhere to translate the majority of the sign language, without much trouble, save for one particular sequence, which left the proofreader baffled, but which seemed obvious to me. 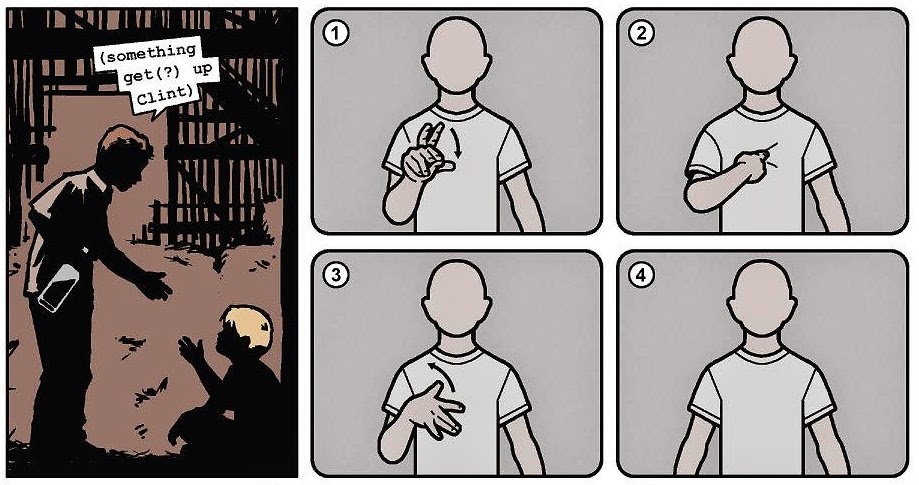 To give some context, there are flashbacks to beatings from his drunken father.  With that little extra detail, we can now interpret the silent image as:

Clint: No, I feel nothing.

What's left out is how EXHAUSTING it can be constantly deciphering everything everybody's saying.

Even if you tell regular hearing people to face you when talking, it's easy for them to forget these rules when they talk to another regular hearing person, and turn away, reverting back to their regular talking speed, leaving you trying in vain to catch what they're saying.  You think lip-reading is hard?  Try doing it from a side angle.

When being mainstreamed into a regular school, Cece Bell is given a microphone in class to better understand what's going on.  This had the unintended side effect of listening in to the teacher during private conversations outside of the classroom when she would forget about carrying a one-way wiretapping device.  As useful as this is for overhearing adult dialogue in the bathroom, it's not helpful in face-to-face conversations.  It's like superhearing, but only under extremely limited conditions. 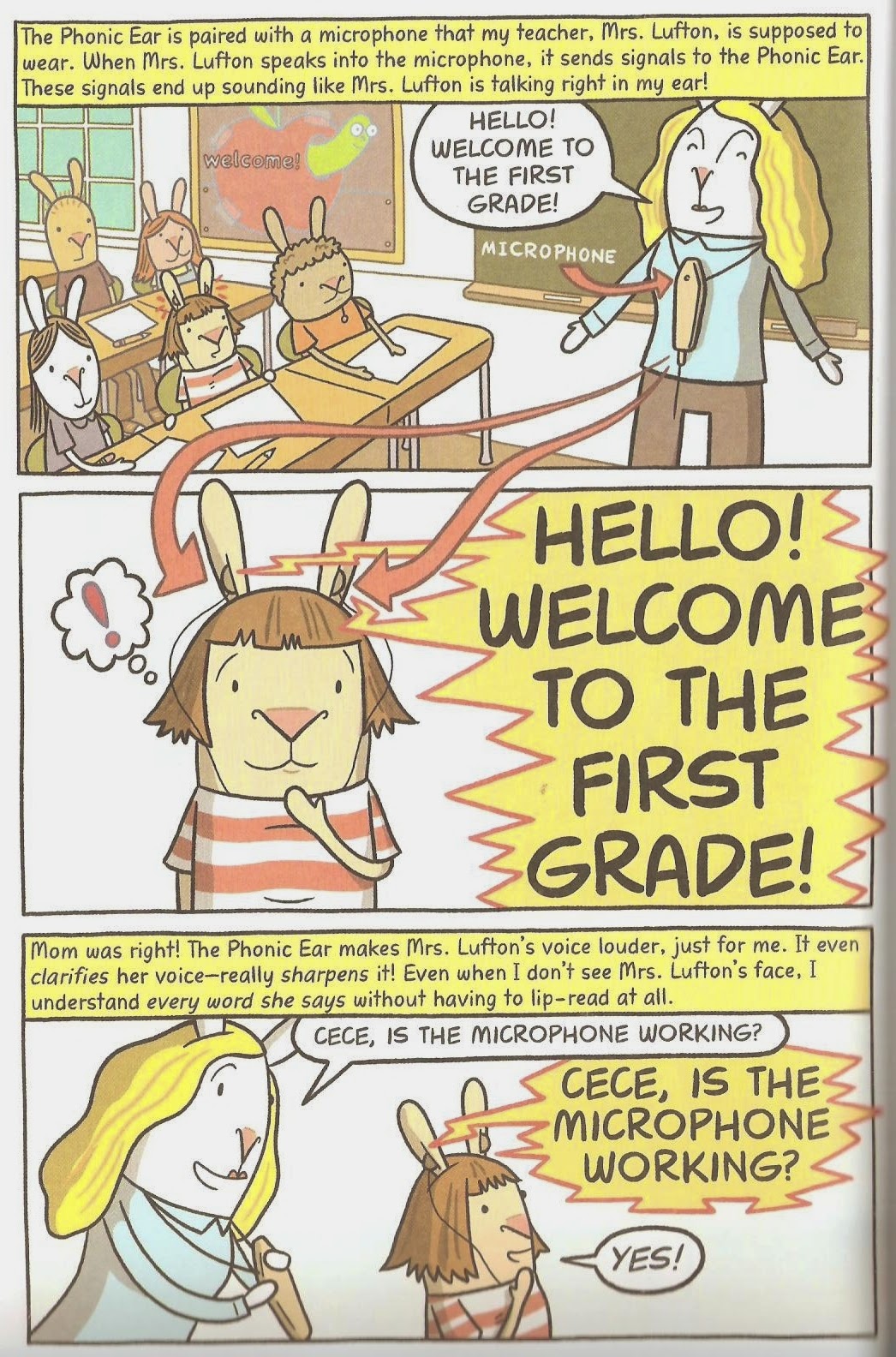 Although I had a similar FM system throughout grade and high school, I was never able to fully enjoy the wide range of sounds that Cece Bell did.  To me, the noise from the FM System was more distracting than helpful, compared to the more immediate and accurate simulation of a face-to-face oral interpreter, who not only would clear up words I might not understand, but repeat sentences I would've otherwise missed.

Despite my misgivings, I was never embarrassed by my deafness, seeing it as a part of me, but Cece Bell clearly felt otherwise, going so far as to hide her hearing aid underneath her clothes, the only proof of her disability being visible via the wires attached to her ears. 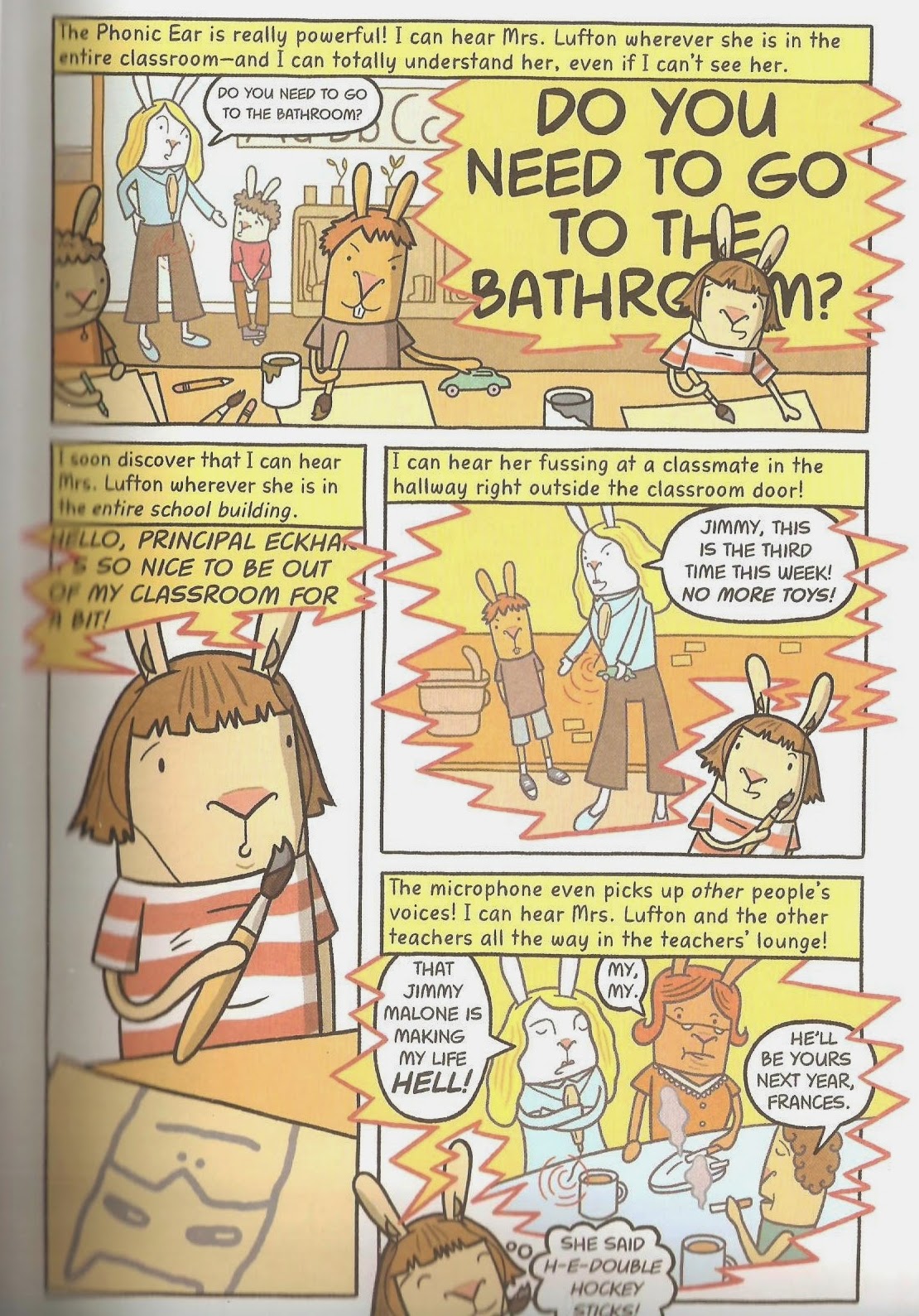 Inside and outside of school, Cece Bell has trouble with fitting in by being unable to enjoy the same radio and TV programs as everybody else.  Since this obviously takes place before close captioning became more widespread, I can only imagine the amount of frustration she had to overcome.  To this day, I STILL can't watch several shows I'm potentially interested in simply because there aren't any available subtitles, either legal or illegal.  While she had to gleam what was going on from second-hand sources from her brothers and sister, she greatly enjoyed the silent cartoons of Tom & Jerry, with their slapstick antics.  Likewise, I enjoyed the cartoons of the Pink Panther and the Coyote & Road Runner.

I was also surprised to learn that Cece Bell didn't know how to read at an early age, since I was able to do so thanks to being constant surrounded by storytelling of beginner's children's books.  As I mentioned before, I learned how to communicate by learning how to read, THEN talk, which I understand is backwards from other people, who learn language by listening, then reading.  I suppose her being able to hear in her early childhood might've been a mitigating factor.  Even so, I would've liked to learn how she managed to overcome the hurdle of reading.  The only hint we get is of a single Batman comic, which is used as an apt metaphor. 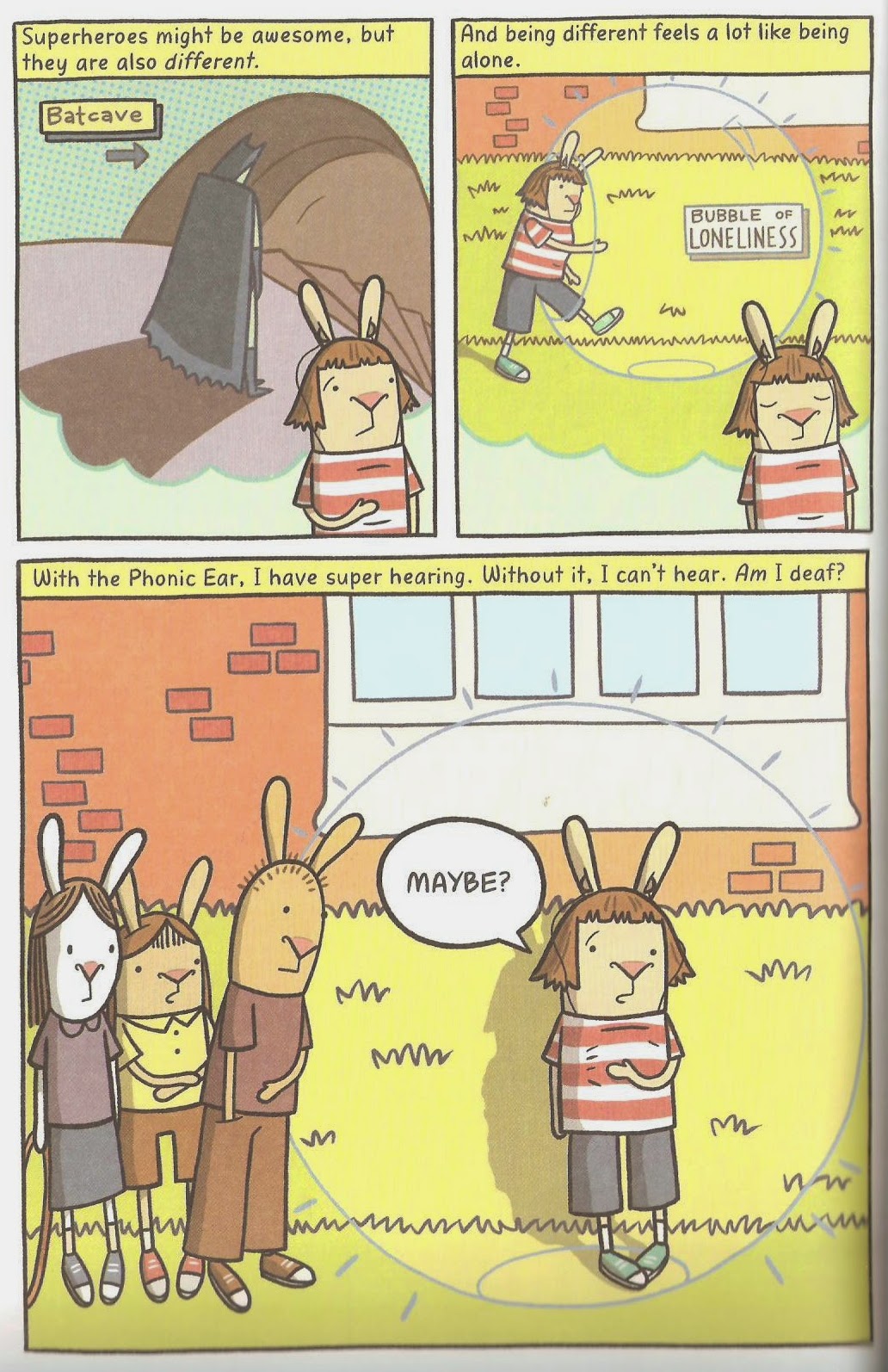 In addition, because of her reluctance to interact with the outside world, she had an extremely small circle of friends, starting with a domineering friend who wanted to control her, which brought back ugly stories I'd heard about my sister's experience in High School.  The next friend she made was friendlier, but tended to aggravate Cece Bell by over-exaggerating her speech patterns.  She could understand her clearly, but felt like she was being condescended to, even though she could comprehend her speech at a faster pace.  Trying to find and keep friends who are easy to get along with is an uphill battle.  It's not like you can just easily switch out to another friend who's easy to understand.  To quote a metaphor I often use, trying to get someone with social phobia to interact with a party is like trying to introduce an illiterate to a library - they're going to be intimidated by the amount of material.

The only parts I didn't personally like were Cece Bell's imaging herself as a S-hero, imagining herself saying and doing things she'd wished she said, overdramatizing her dilemmas and the schoolgirl crush over a cute boy that's basically a self-contained one-sided Soap Opera drama.  Fortunately, the latter didn't quite protrude over the latter half

Of course, these are purely my personal opinion.  These factors may not bother other readers, and shouldn't be considered a deterrent for what's essentially a window into a world of deafness that no longer exists, but which struggles remain relevant to this day.

"Hearing is the deepest, most humanizing philosophical sense man possesses... the sound of the voice that brings us language, sets thought astir and helps us in the intellectual company of man."
- Helen Keller


or, as otherwise heard by a deaf person, 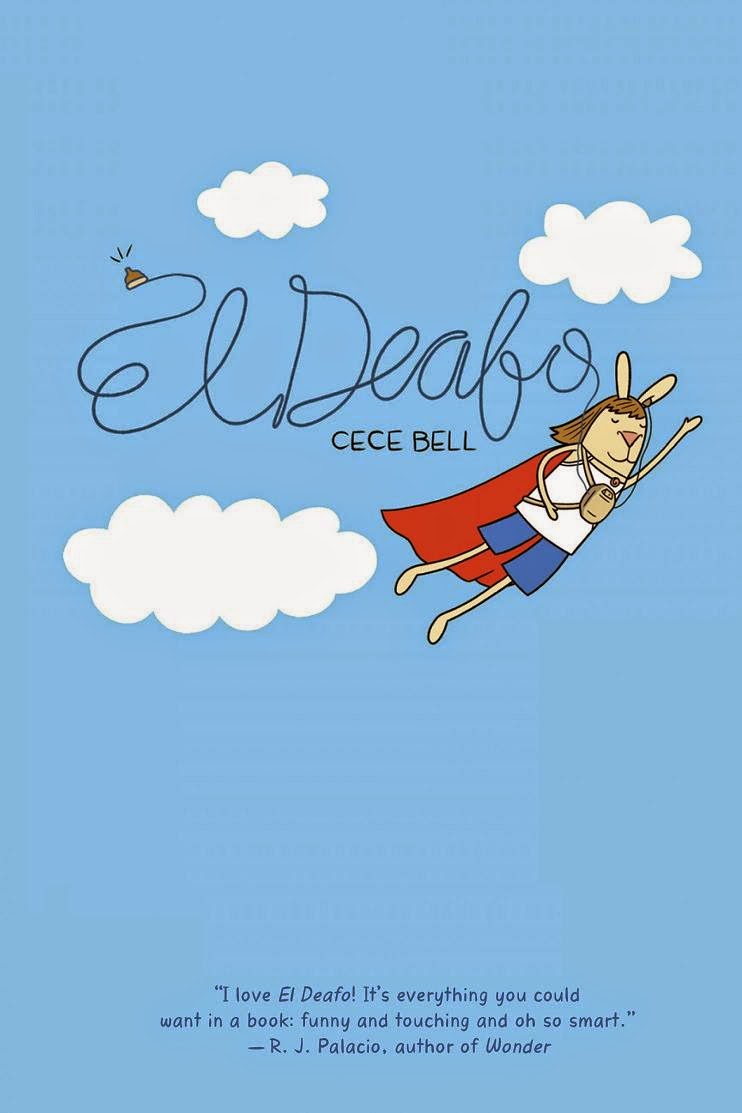