It's a Cat's Lives

I've just recently found out that yesterday was World Cat Day, which seems appropriate since the internet seems tailor-made to support cat-related sources such as amusing cat videos and Cat Memes.  One of the most recent links that seems to have exploded in popularity is Confused Cats Against Feminism, which is a parody of the typical male reaction to anything that potentially threatens male privilege.

While most contributors would no doubt be submitting plenty of funny and cute stuff, I thought I'd make mine more closer to my heart by combining two of my favorite stories - one from the sadly offline ex.org, the source of early online Anime fandom essays, and the other by Émile Franc from 2000 Comic L'association, an anthology consisting of 2000 pages of silent comics from various cartoonists all over the world, usually having the new millennium as a theme.  Normally, you'd think that having a book consisting of nothing but pictures would be an easy and quick read, but since the stories are all done by various artists, the comics all have different amount of pacing, which amounts to having to implement lots of careful "reading" without any helpful words to help propel the action along.  If you're having trouble understanding what happens, there's a handy cheat sheet at the bottom.  Seriously, you should try re-reading it multiple times to really get it.

As for the story below, I changed around the order of some of the opening paragraphs so they'd be closer to the relevant pages, but otherwise, nothing's really changed.

The Cat who Lived a Million Lives: 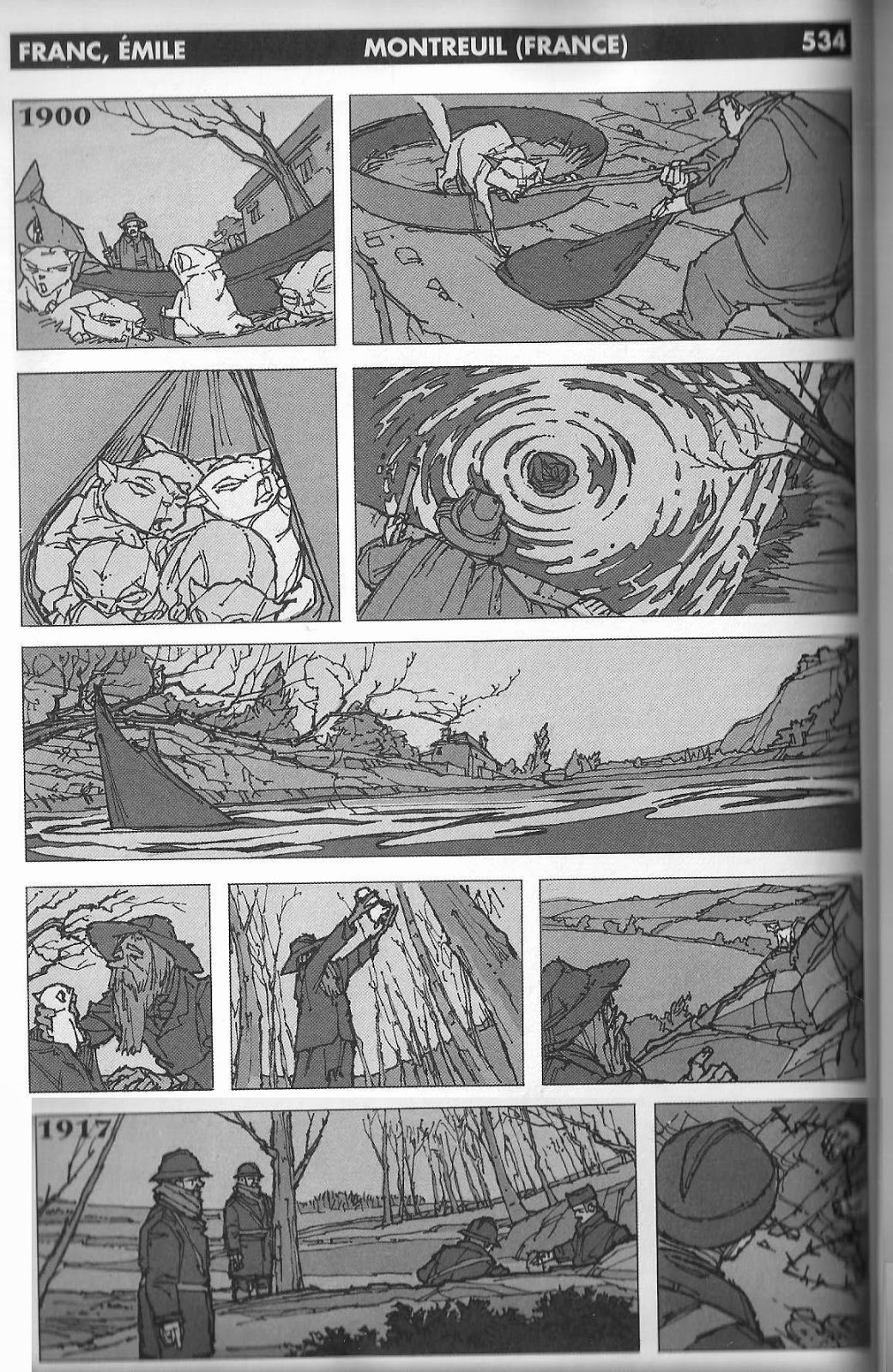 Once, the cat was a king's cat.
The cat hated the king.
The king was great at war, and was always at war.
And, he put the cat in a magnificent cage,
And took him out to war.
One day, the cat was hit by a flying arrow, and died.
The king embraced the cat and wailed during the battle.
The king stopped the war and returned to his castle.
And, he buried the cat in the castle's garden. 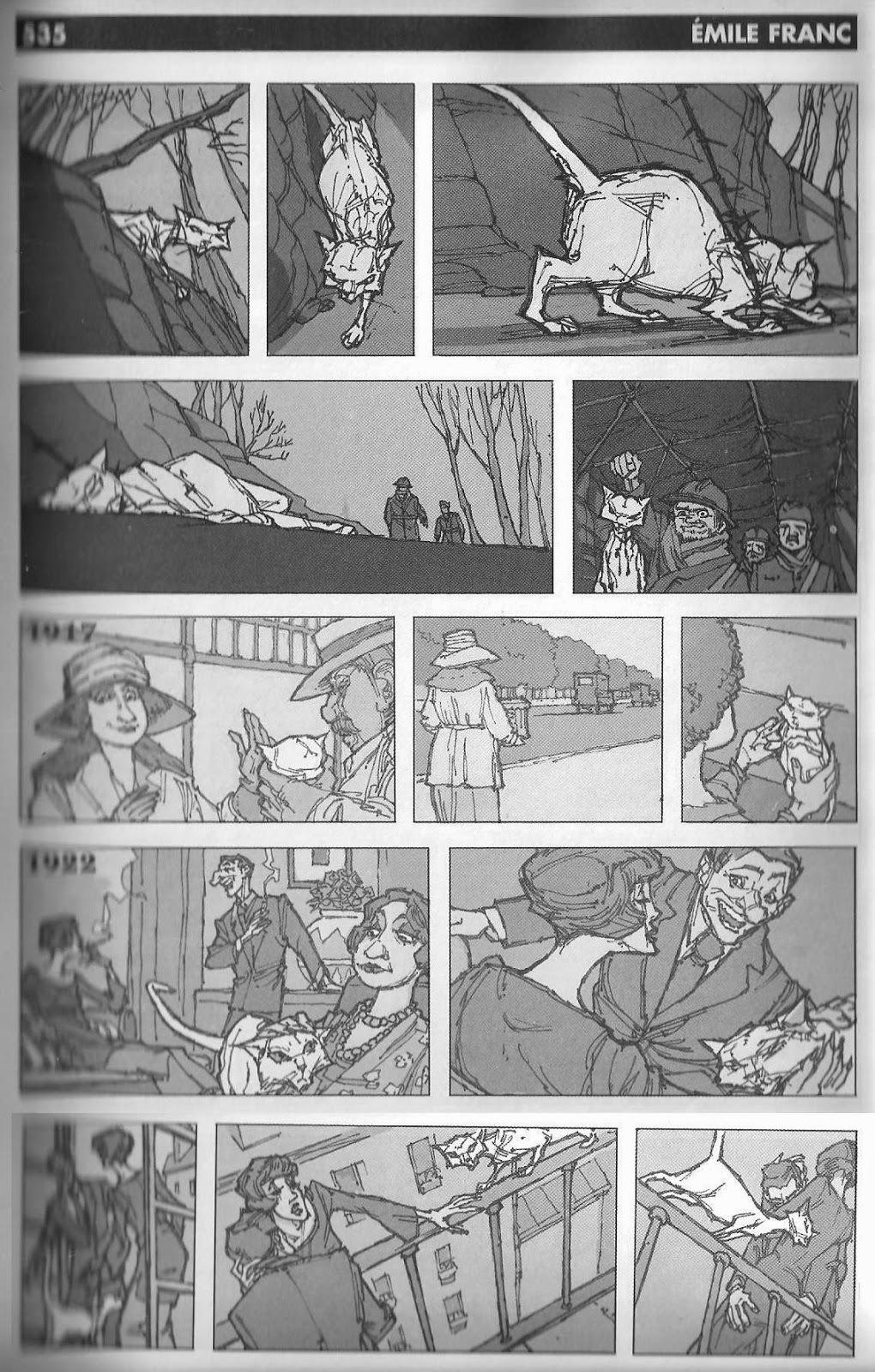 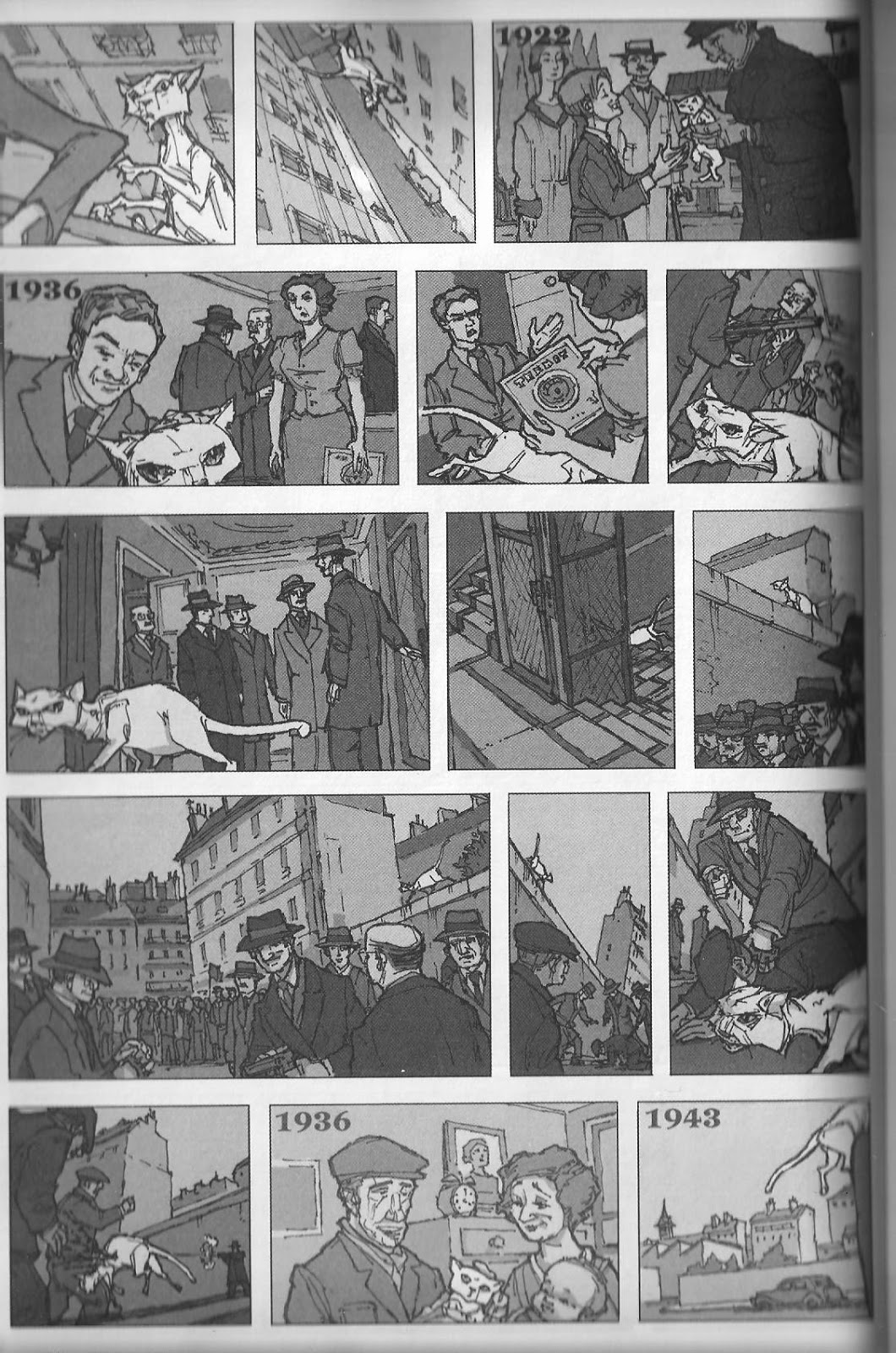 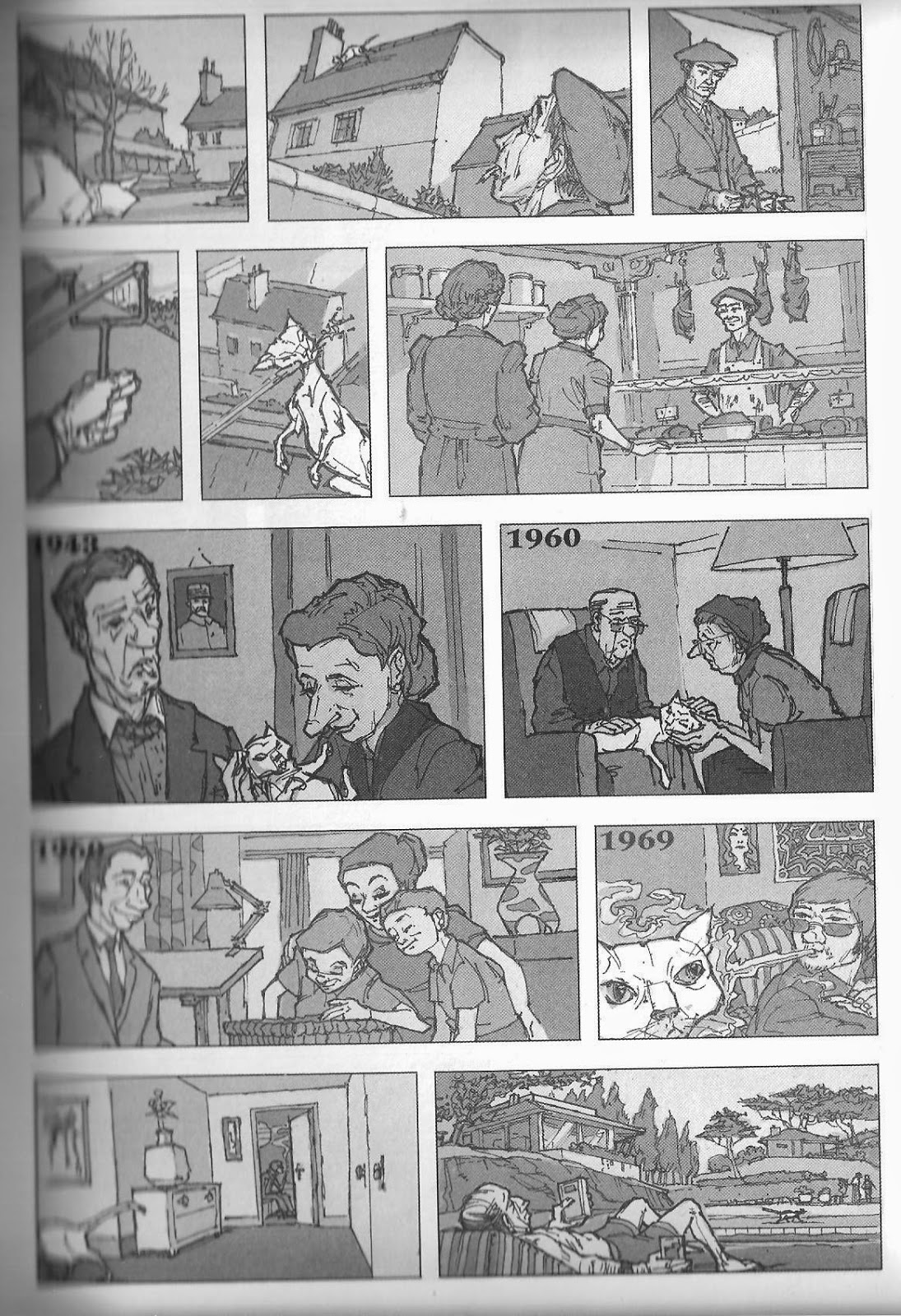 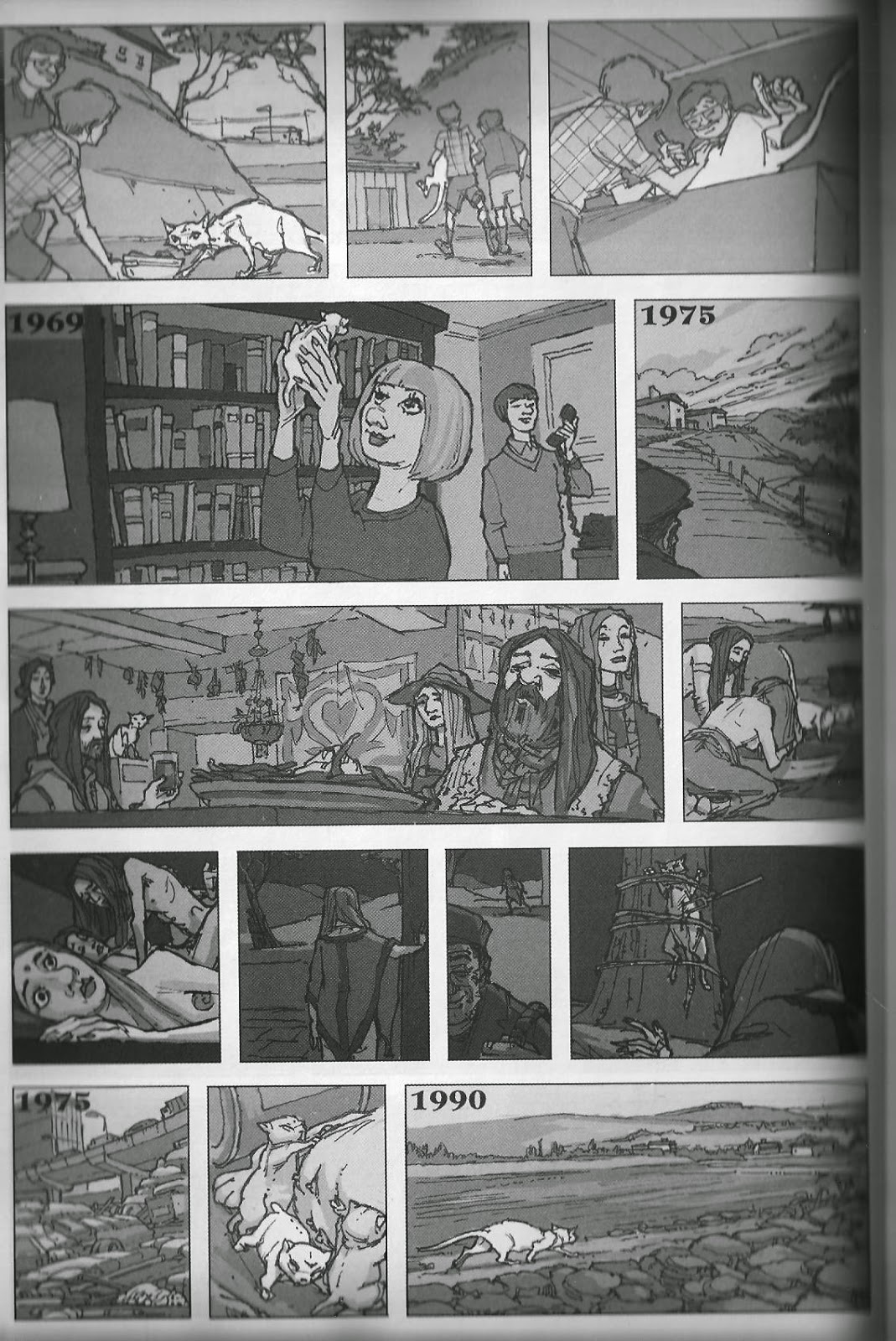 Once, the cat was a little girl's cat.
The cat hated children.
The girl piggy-backed the cat, and slept clutching the cat.
When she cried, she wiped her tears on the cat's back.
One day atop the girl's back,
The holster to keep the cat secure wound around his neck,
And the cat died.
Holding the cat with the dangly neck, the girl cried all day.
And, she buried the cat under a tree in the yard.

The cat had no fear of dying. 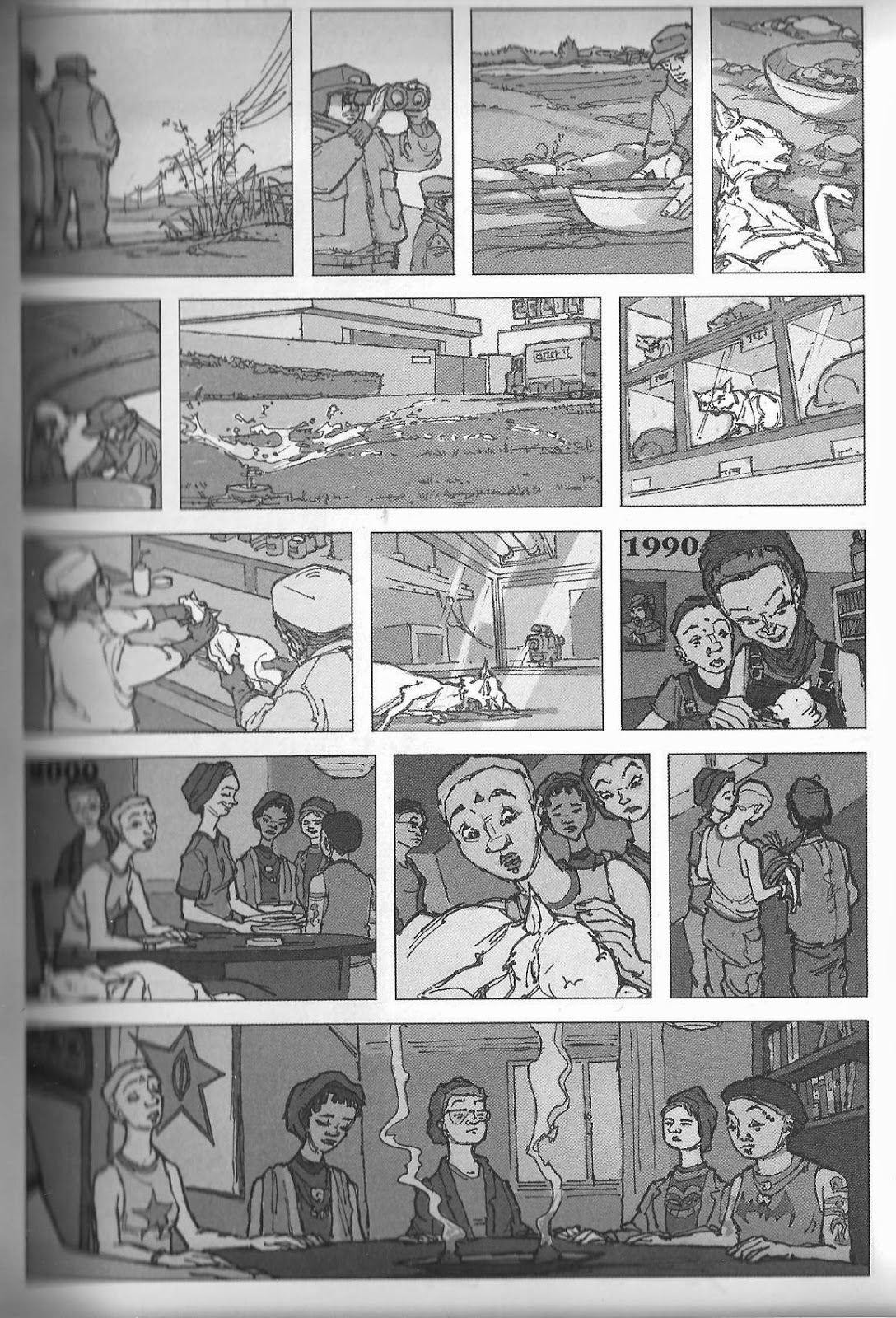 Once, the cat wasn't anyone's cat.
He was a stray cat.
The cat was able to be his own cat for the first time.
The cat loved himself.
Since he was a great tiger-striped cat,
He became a great stray cat.

All the female cats wanted to be the cat's wife.
There were cats that gave him huge fish.
Others gave him premium mice.
Some cats brought rare catnip as a gift.
Other cats licked his tiger fur for him.
The cat said to all of them—
"I've died a million times! This is so ridiculous now!"
The cat loved himself more than anyone else.

The white cat had many cute kittens.
The cat no longer dared to say "I have had a million—"
The cat loved the white cat and all the many kittens
Even more than himself.

As time passed, the kittens grew up and all went away.
The cat, satisfied, said, "They became great stray cats now."
The white cat said, "Yes," and softly purred her throat.
The white cat had become a grandmother cat.
The cat purred his throat even more softly.
The cat thought that he wanted to live forever with the white cat. 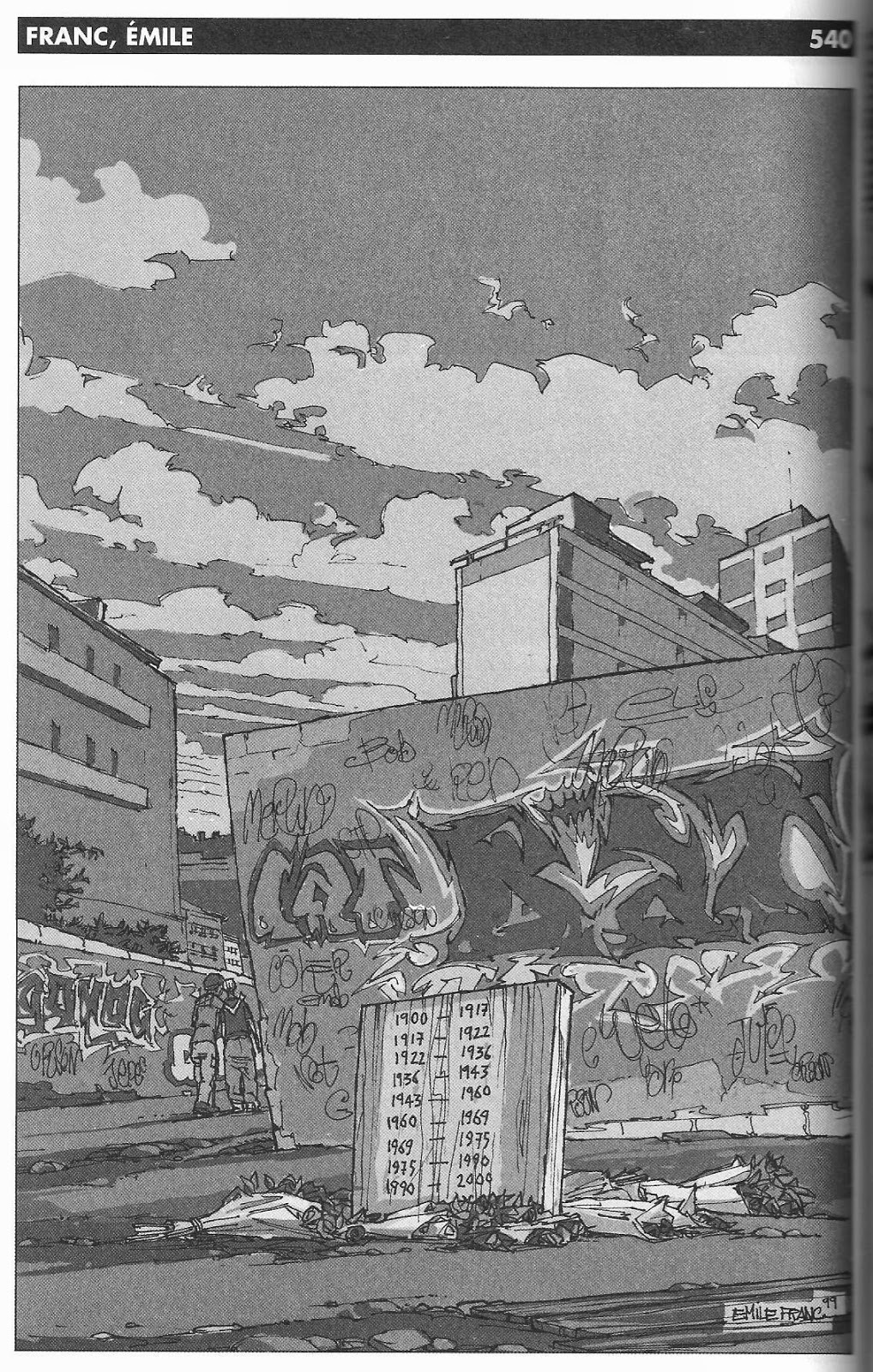 The cat never came back to life again.

— HYAKUMANKAI IKITA NEKO
The Cat Who Lived a Million Times


Handy timesheet of the above dates:

1900-1917:  A mother cat is found to have too many babies, and has her litter dumped in the river.  One solitary survivor is retrieved from a rescuer downstream, and lives fairly free until while wandering a battlefield, gets its neck snapped in a noose of barbed wire, much to the soldiers' pleasure.

1917-1922:  Is part of the high socialist's society, and while the owner is preoccupied with a romantic liaison with her fiance, walks precariously alongside the balcony window until unwittingly pushed off.

1922-1936:  Gets caught up in a gang war of musicians who keep assault weapons in their guitar cases, and winds up a casualty of friendly fire.

1936-1943: Is part of a family couple, until spied by a butcher while climbing one roof too many, and is knocked off by a slingshot and sold for meat.

1943-1960:  Lives an uneventful life with a married couple well into their retirement years, which goes to show that a boring life may not be all that bad.

1960-1969: Lives with a rich carefree family with little responsibility over their children to the point where some boys cut the cat open just for fun.

1969-1975: Lives with a couple that later becomes part of a Hippie society, and is crucified on a tree as a warning to others.

1975-1990: Roams the highways until tempted with drugged food and sent to a laboratory and then experimented on until it's outlived its usefulness.

1990-2000: Is part of a large group of friends for a decade until dying of natural causes, and a seance is held  and a proper grave is contributed in honour of its previous lives.
Posted by DeBT at 6:07 PM