When legacy strips get carried on by replacements, there are two ways the comic can be carried out.  One is to carry on as faithfully to the material, staying straight to the formula, and allowing no room for creativity, lest the audience lose their devotion.  The other is to renovate and innovate events slightly while still maintaining an air of familiarity with the subject.  Either way, there are certain aspects that may be missed by ghost artist that were evident when the original author was doing their work.  There are just some things that the original creator founded that may not even occur to well-meaning copycats.  One of these things Dik Browne's successor seems to have forgotten was that every July 14th, there would be an annual celebration of the rare act of bathing the infamous viking, even as his day job meant that he would be terrorizing people.  The main point being, I suppose, that for one solitary day, Hagar is being terrorized by the populace.  (His wife doesn't count) 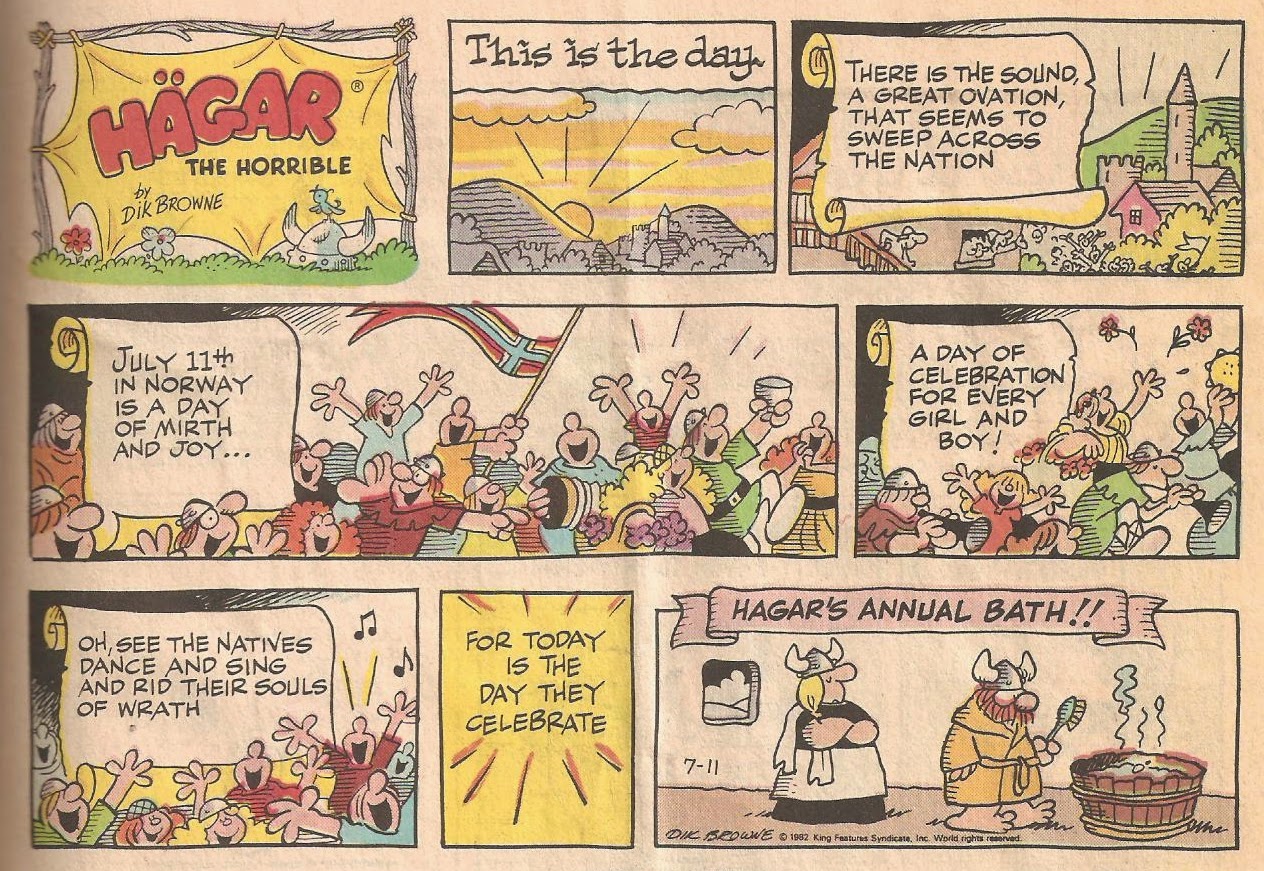 Of course, as you may have noticed, this date wasn't always an absolute.  Not unlike statuary holidays that are moved up and down depending on the circumstances.  There would be some notable exceptions where Hagar would be in situations where he had to take baths despite it not being anywhere close to July.  On one hand, this could be forgiven for historical inability to preserve dates and times of when certain memorable events happened, since they didn't have watches or a reliable calendar system.  On another hand, it's also an example of how a cartoonist can be restricted for following their own rules when the calendar refuses to comply with their schedule.  (I'm still disappointed with Garfield's inability to take advantage of uncelebrating the rare occurrence of his most hated day, February Monday the 13th)  Here's an example where Hagar poses a compelling argument to preserve the conservation of water which could be put to better use in mid-April. 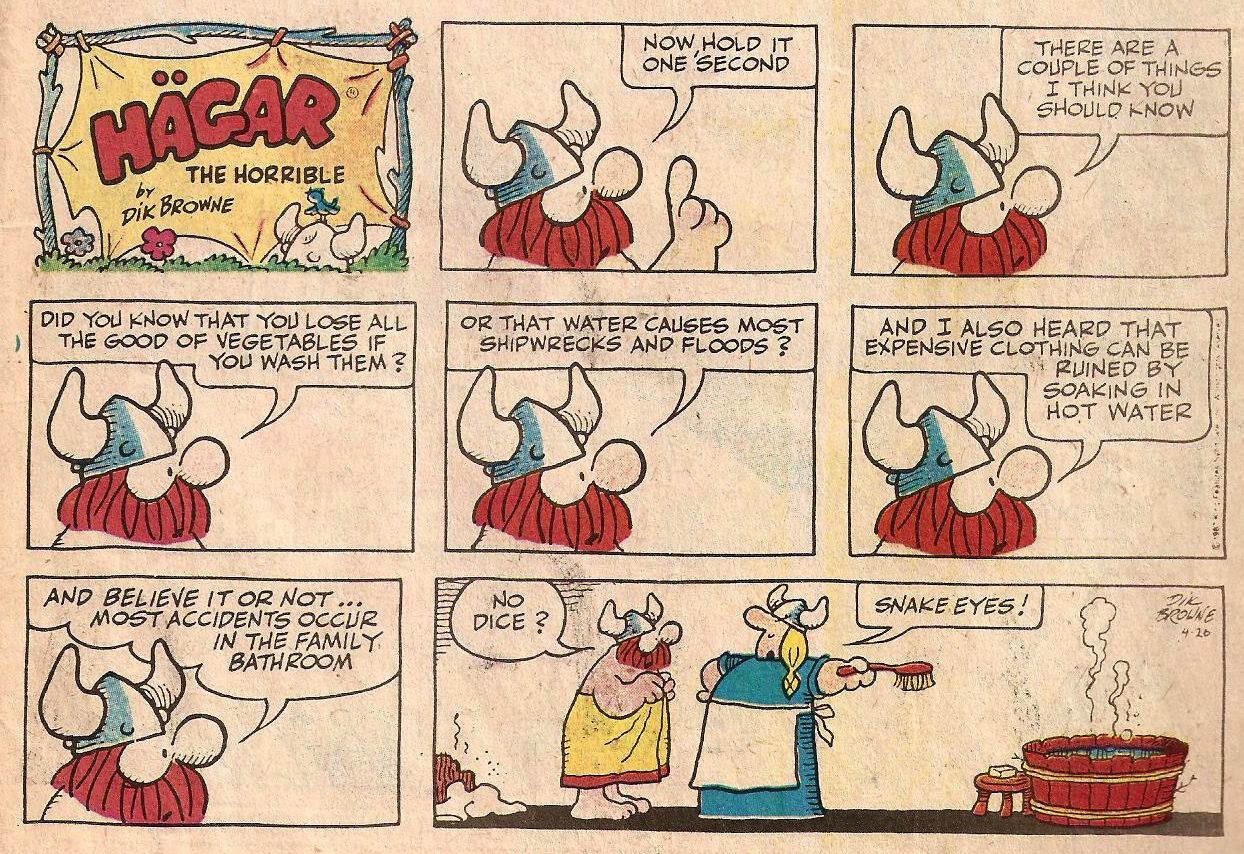 Whatever the cause, the incidence was rare enough to be considered celebratory enough to bring throes of adoring crowds to see the ritual happen.  If there were any refreshment, game or gift stands nearby, they probably would've been there to make a profit. 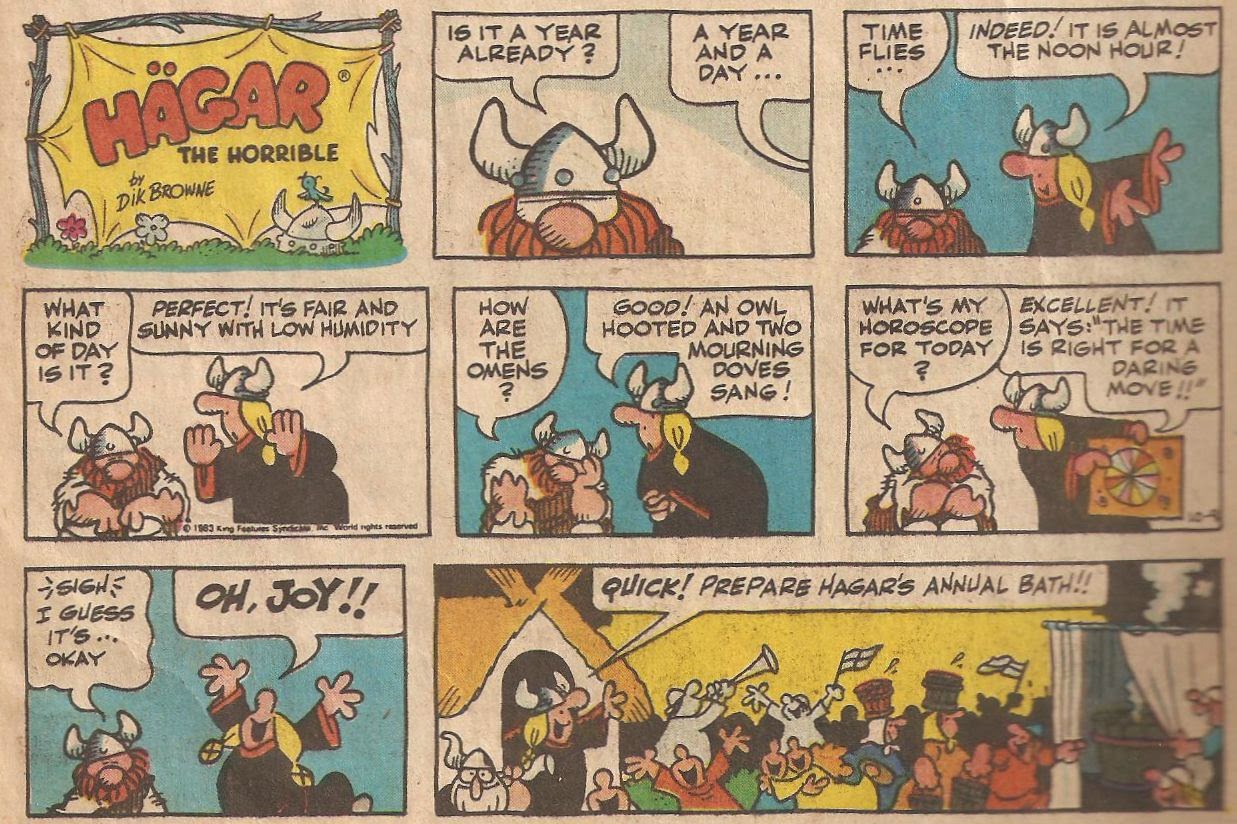 Considering that only a select few people actually gather to watch Hagar take a bath (which would be embarrassing enough in its own right), the holiday could be the closest equivalent to a sports festival with brief running commentary, right down to a play-by-play account, all done in the imagination of the onlookers, not that dissimilar to radio.  Only after Hagar finished his bath would the collective crowd feel relieved by the unbearable suspense of the inevitable result.  Sure everybody knows how it ends, but that feeling when an epic event has truly passed seems to be a universal theme worldwide.  Not unlike a New Year's baby replacing the Old Man Year. 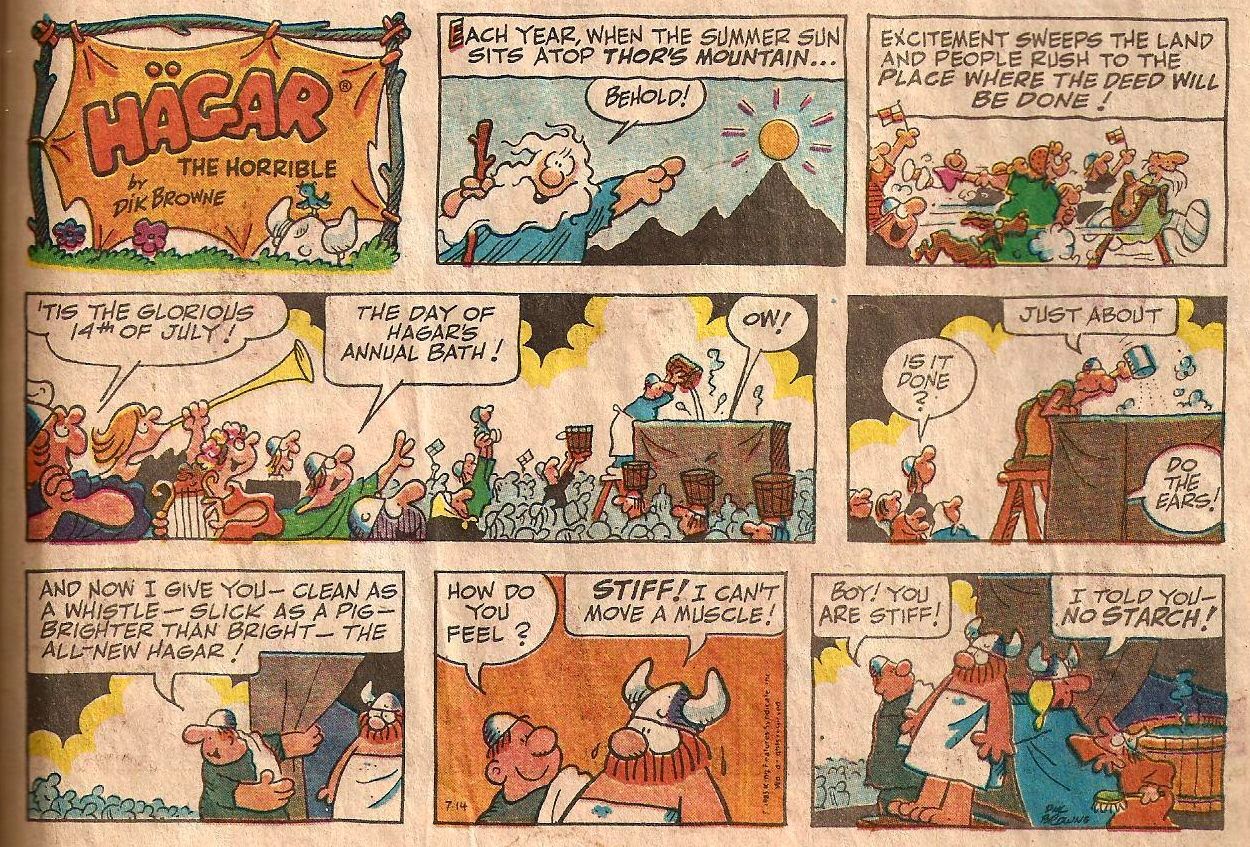 So why was Hagar so reluctant to take baths anyways?  Could the very act of taking a bath be fraught with unimpeded dangers that would only become obvious in hindsight?  Could it be Hagar was accustomed to remain content in his own filth, being naturally acclimated to years of dirt piling up over his pores, much like macho lazy slobs who can't be bothered to waste their time on trivialities such as washing their hands?  Could it be that in the Middle / Dark Ages, washing was still considered a new foreign concept that would appear frightening to the point where the act of washing away invisible microbes no one could see was considered the rantings of quack doctors? 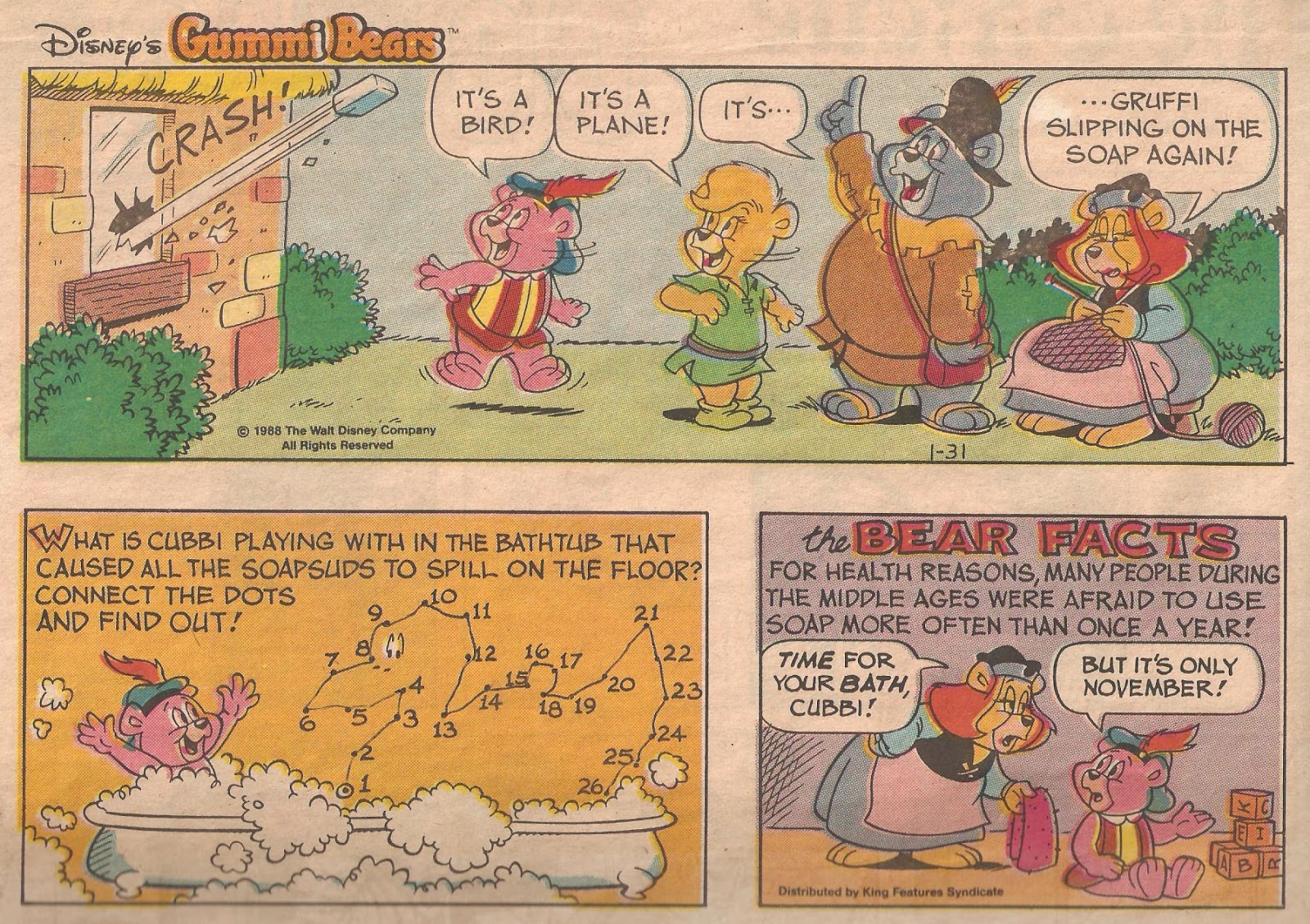 Or could the real reason be something more basic in the manner of survival? 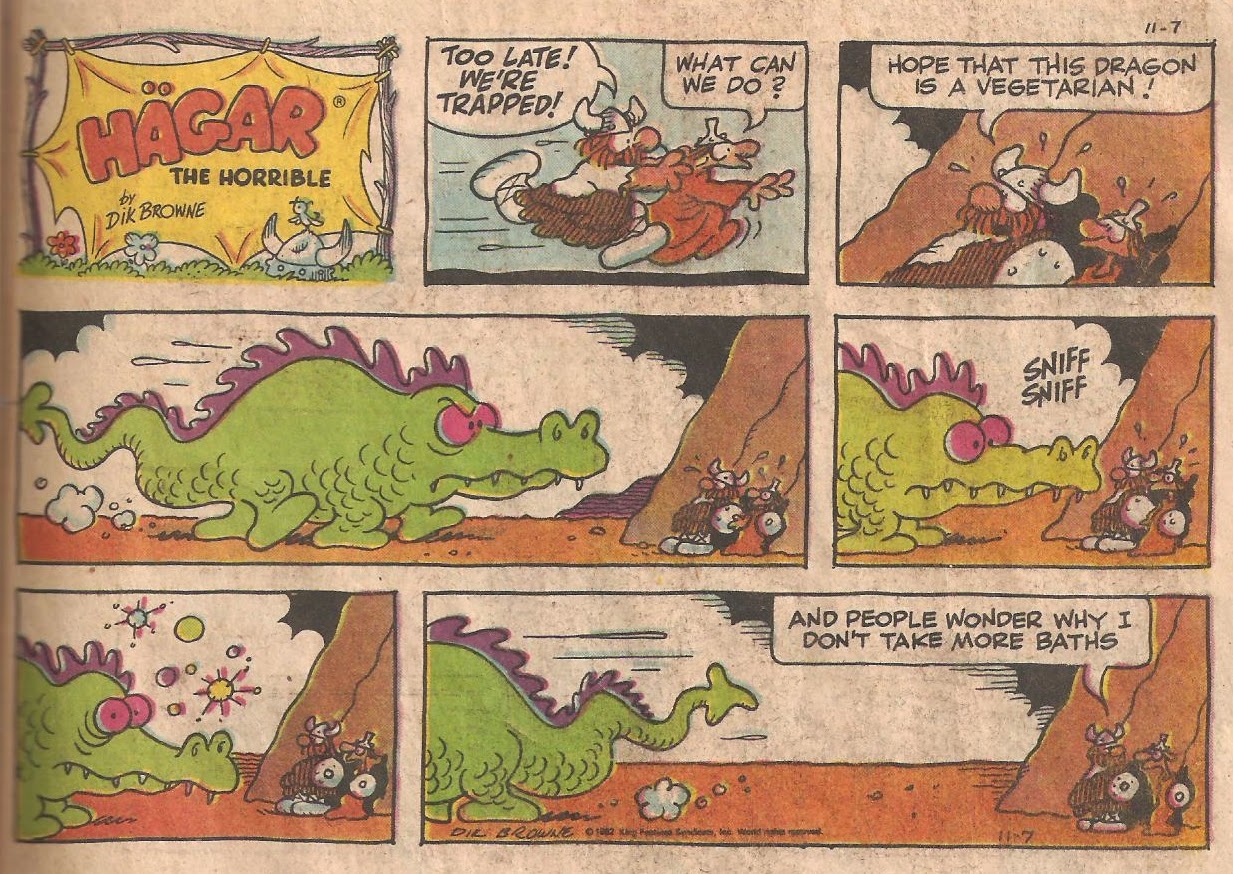