Following up from my previous post are more stuff ripped from the headlines that reminded me of comics, or if not outright comics, then certain photomanipulations.

Recently in Quebec, there was a woman on trial who inadvertently stopped her car in the middle of the highway, causing a traffic accident of a motorist and his daughter, resulting in the deaths of two people.
The reason she stopped the car in the middle of a highway at night was to stop for - get this - baby ducks.
According to the woman, she was concerned about these ducklings who were wandering at night with no mother, and wanted to take them home with her.  Too bad that she neglected to leave her rear lights on, and left her door open in her attempt at preserving wildlife.

A revamp to the criminal code in 2007 changed the verdict of people charged with criminal intent from doing community service to outright "Go straight to jail", even if they have no criminal past.  The difference was that Emma Czornobaj had no malicious intent.  In any other context, what would have been considered a traffic accident was inflated to a maximum sentence of fourteen years.  It's frankly the first time anything of this scope has ever happened here, and the judge's phrasing of the law to the jury means that a rewrite of the laws may be considered necessary.  Hopefully, she'll get a lenient sentence when her jail term's pronounced in August, barring an appeal.

It's been 25 years since the protest at Tiananmen Square, and since then, the people have had a rash of collective amnesia about the events that took place.  Apparently, everyone was embarrassed about the kinds of things they did, which was totally acceptable at the time, such as ratting out friends or family members who might've been influenced by "outside interests".  If it didn't originate in China, it was deemed a danger to the fabric of society, and had to be squashed down at all costs.  Now that China's gone from a Communist to a Capitalist country, where chances are you're using a product you're that's probably Made in China (yet ironically, they're also the largest exporter of bootlegs)

The definitive symbol of student rebellion is summed up by the image of a lone man standing up to a row of tanks which was actually a cropped version of a whole street of tanks, stretching down several blocks.  Not unlike the collection of zoomed out famous landmarks giving a more impressive sense of scale. 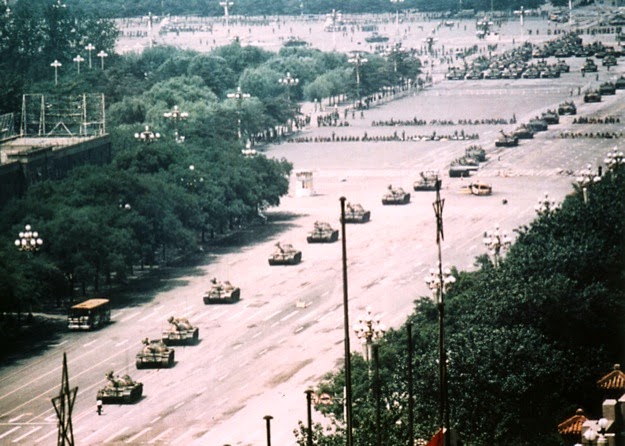 The unknown man who stood single-handedly against this throe of impressive military machinery clutching nothing more than a grocery bag was a hero for the ages, until he was dragged off by well-wishers who didn't want to see him made a greasy smear on the pavement.  But if we zoom in closer, we can make out some significant features that're remarkable in the absence of significance - mainly how plain and blank-looking he is: 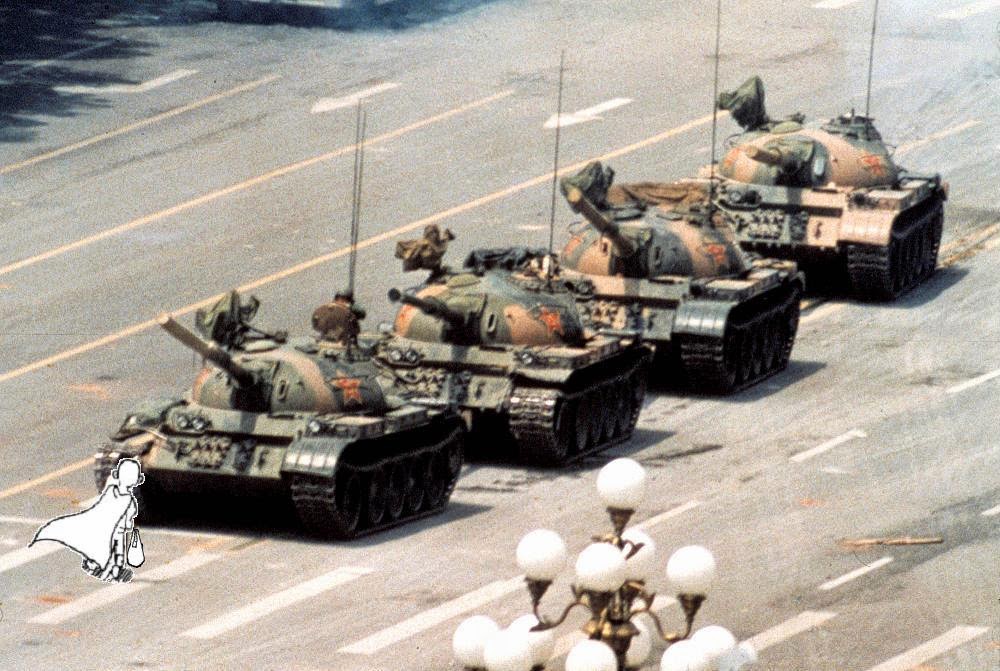 As much of a classic Roger Rabbit is, there's been talk of trying to do a sequel (or prequel) to the movie, which would be quite the feat, considering the heights it reached back when animation was considered little more than a dying art form.  Looking back at it, what makes the movie stand out more than the impressive animation techniques, is how strongly the story holds up.  All the plot points and clues and diversions are there, sprinkled about amidst the impressive array of visual jokes.  Even with today's technology, it's difficult to think of a story that would be able to do the film that could do it justice, and not just another cheapquel. While there are familiar noir elements throughout, it's the human element that helps it stand out, and makes it stronger, even as toons are bounding along the scenery.  Something that's sadly forgotten in lackluster ripoffs such as Cool World and Space Jam which relied mostly on their animation to attract audiences. Nowadays, that kind of visual eyecandy is mostly replaced by CGI which is easier to overlay, rather than painstakingly draw animated cels onto every film frame.

Of course, it'd probably be better if the movie was left untouched, since it would sully the reputation of an otherwise flawless experience.  Barring an exceptional script that'd improve upon the original, which was based on a loose homage to Chinatown (both dealing with a dour private detective, a noble femme fatale, and a corrupt judge), there's not much official demand for a licensed property that proved successful once.  Hollywood has a tendency to attempt recapturing lightning in a bottle, leaving either lightning or the bottle out of the equation. 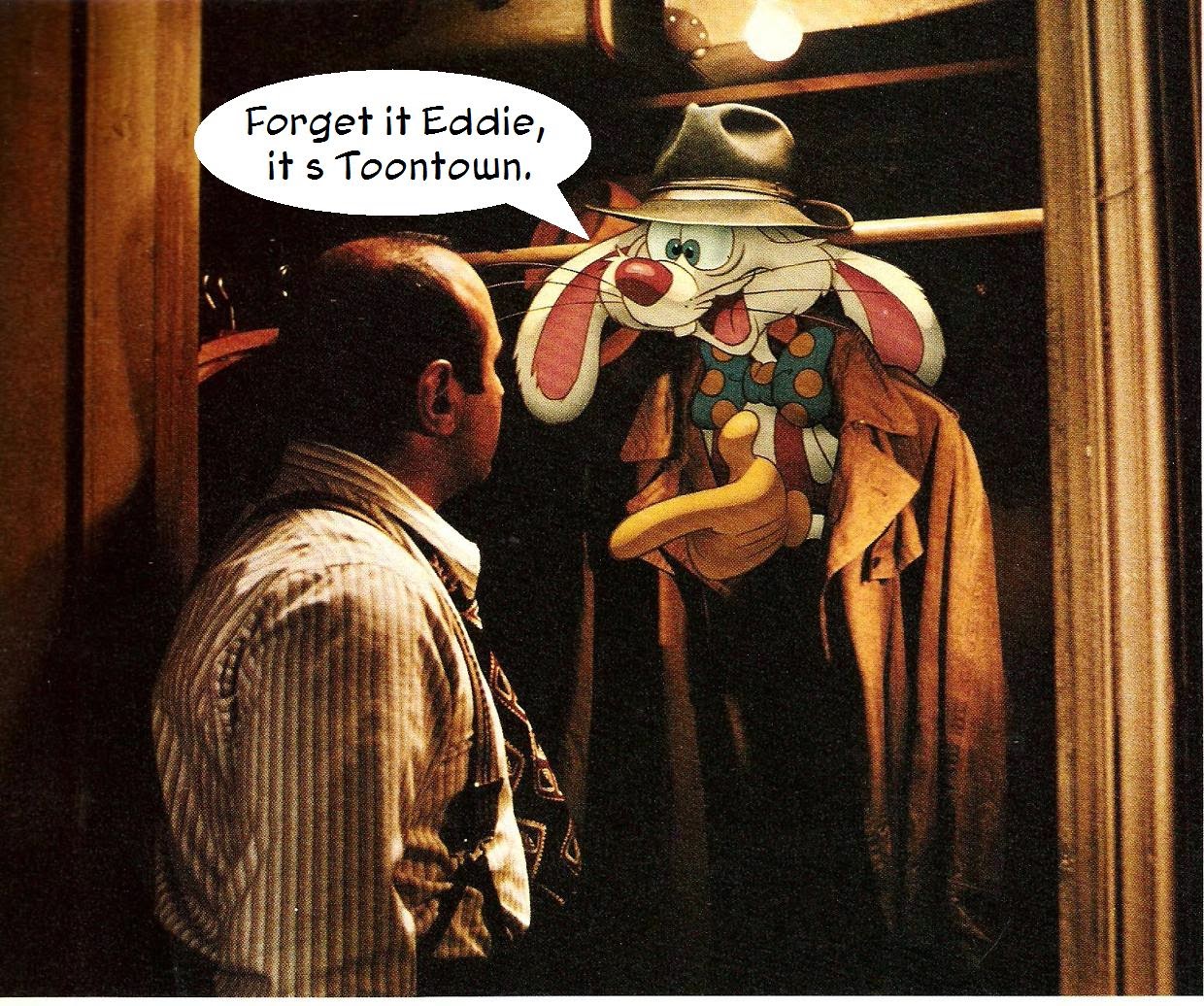 It's been such a long time that Bob Hoskins died before a sequel could be made, and finding a suitable replacement would be an uphill task.  Especially since the reputed British actor was actually driven mad by the presence (or absence) of the cartoon rabbit to the point where he was hallucinating cartoon characters that weren't there.  No wonder he didn't want his facial features present for the Roger Rabbit comics, which replaced his role with the novice detective Rick Flint who, unlike his predecessor, had little to no knowledge of toons, and had to play catch-up in how they acted.  A more successful reiteration of crime prevention and toon logic was between Bonkers D. Bobcat and Lucky "Pickle" Piquel.  The Miranda episodes were lackluster, but it was the interaction between Bonkers and Piquel that were the highlight of the show.

If a Roger Rabbit sequel is attempted, the trick will be to present something that'll draw audiences back to the theaters, and make them stay there.  As attractive as the opening cartoon Something's Cooking was, it was never able to adequately replicate that maniac energy in later installments, which felt increasingly tired, and were attached to movies that audiences weren't primarily interested in.  That, and their repetitive formula of Baby in Trouble was wearing increasingly thin.  There's also the danger of creating a sequel that's as embarrassing as Gary K. Wolf's shameless attempt to cash in on the movie's popularity, completely contradicting the events in his first book.  The only "official" sequel done at the time of the movie's release was the comic The Resurrection of Doom, because of course, you can't have a sequel without a reoccurring villain, even if said villain died of in a fittingly karmic manner.  Disappointingly, rather than reveal the form of the red-eyed toon lurking underneath that rubber mask, Doom simply looked like a wild-eyed cartoonish version of Christopher Lloyd - not that much different from his human form.  As for how he came back, the weasels simply found an animation cel of him and revitalized him.  (The same weasels who died laughing, including the one who was kicked into the Dipmobile - who brought THEM back???)

The one saving grace was Roger's attempt to deal with the realm of limited animation.  If there ever were to be a theoretical sequel, this would be prime material ripe for the picking.  Especially in light of how animators are often told to tone down their animation in order to comply with the studio's recommendations. 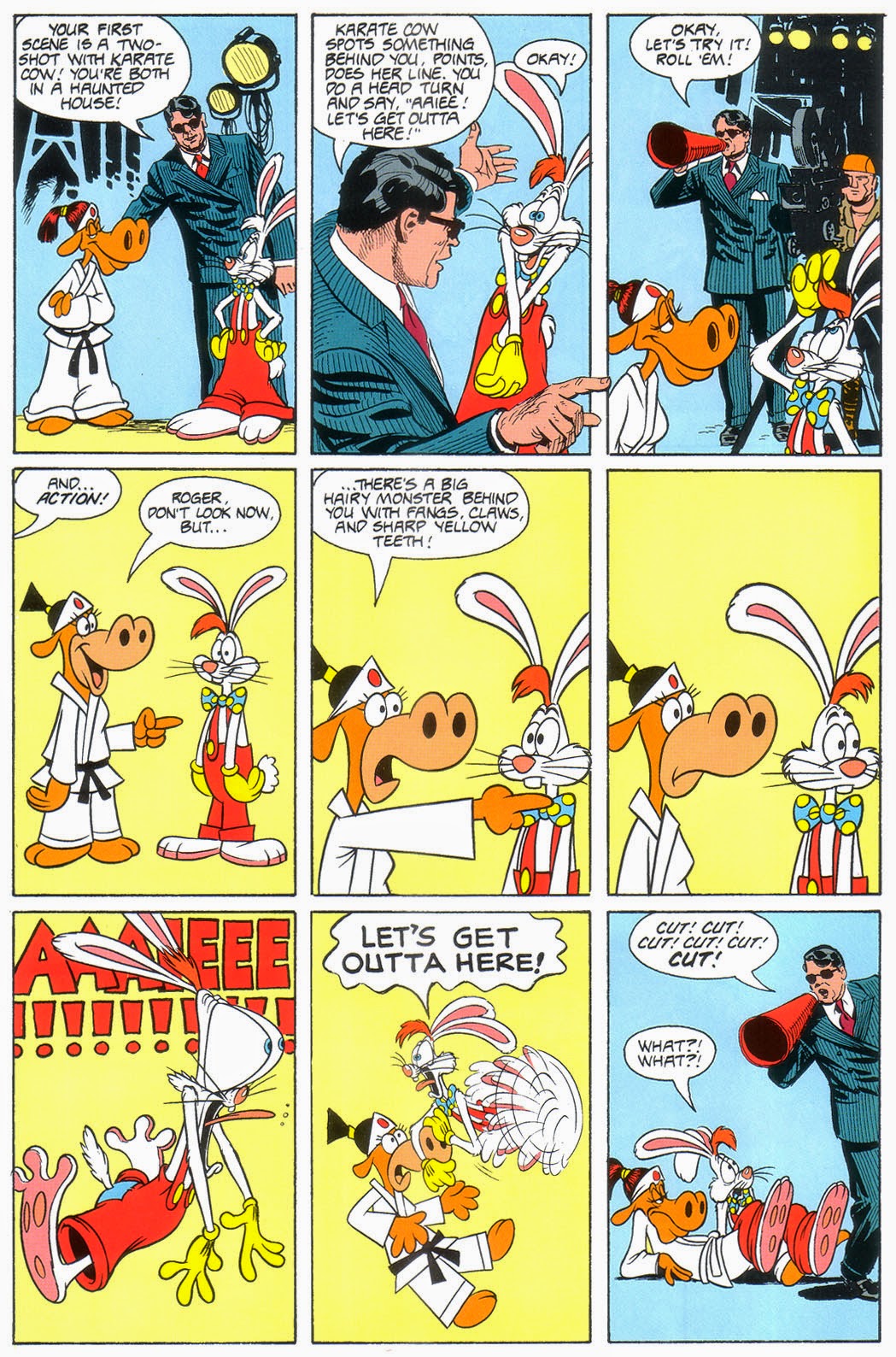 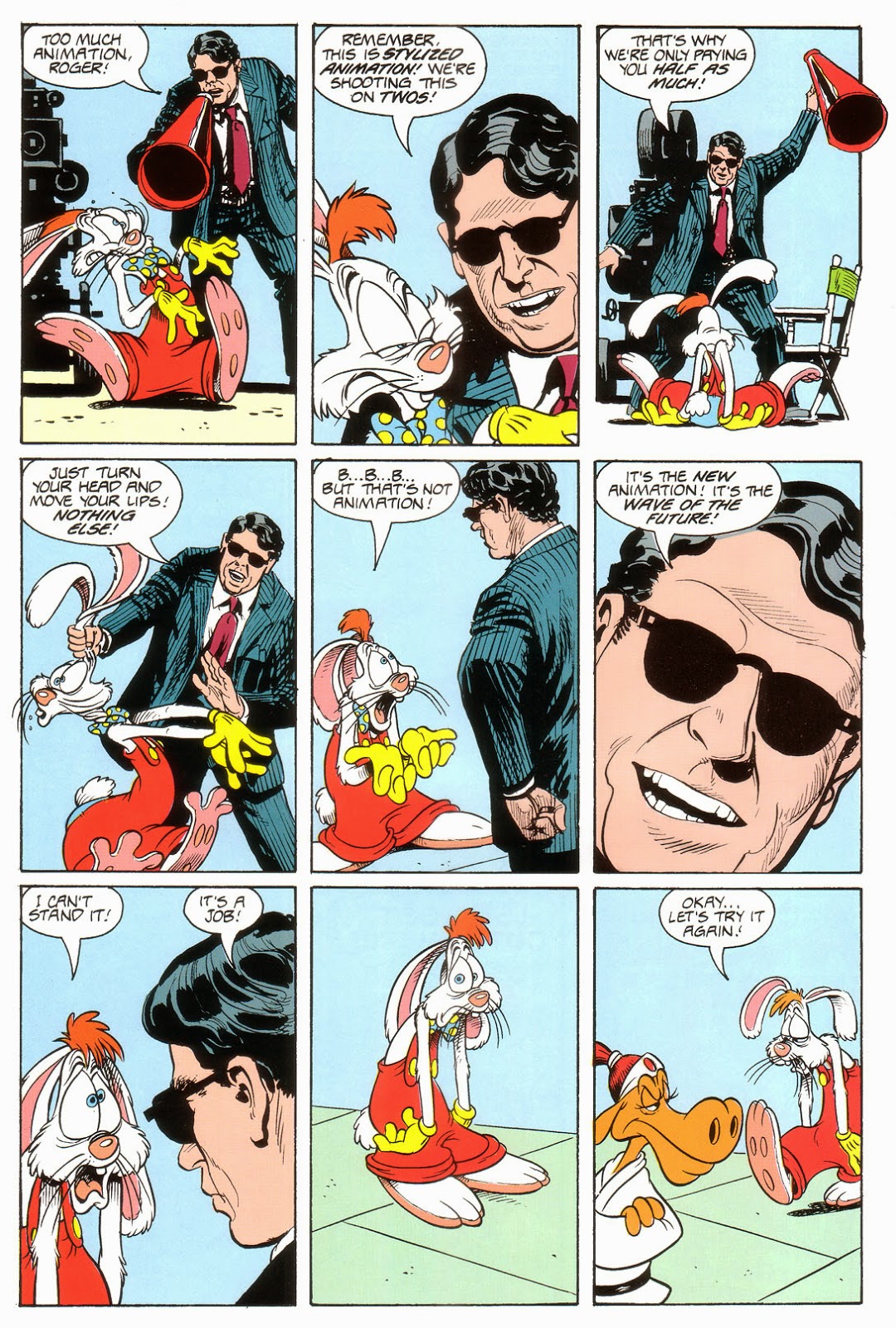 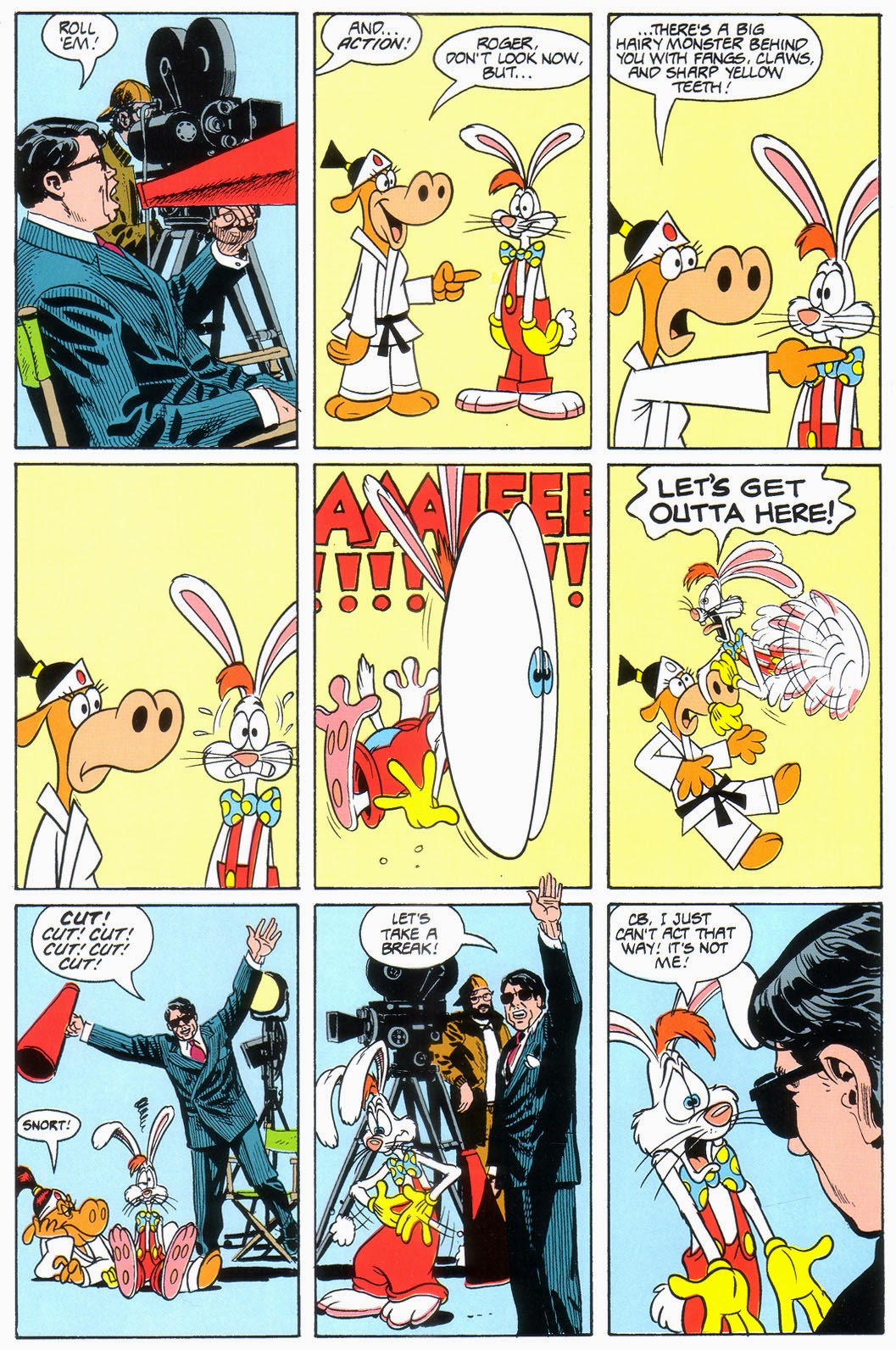 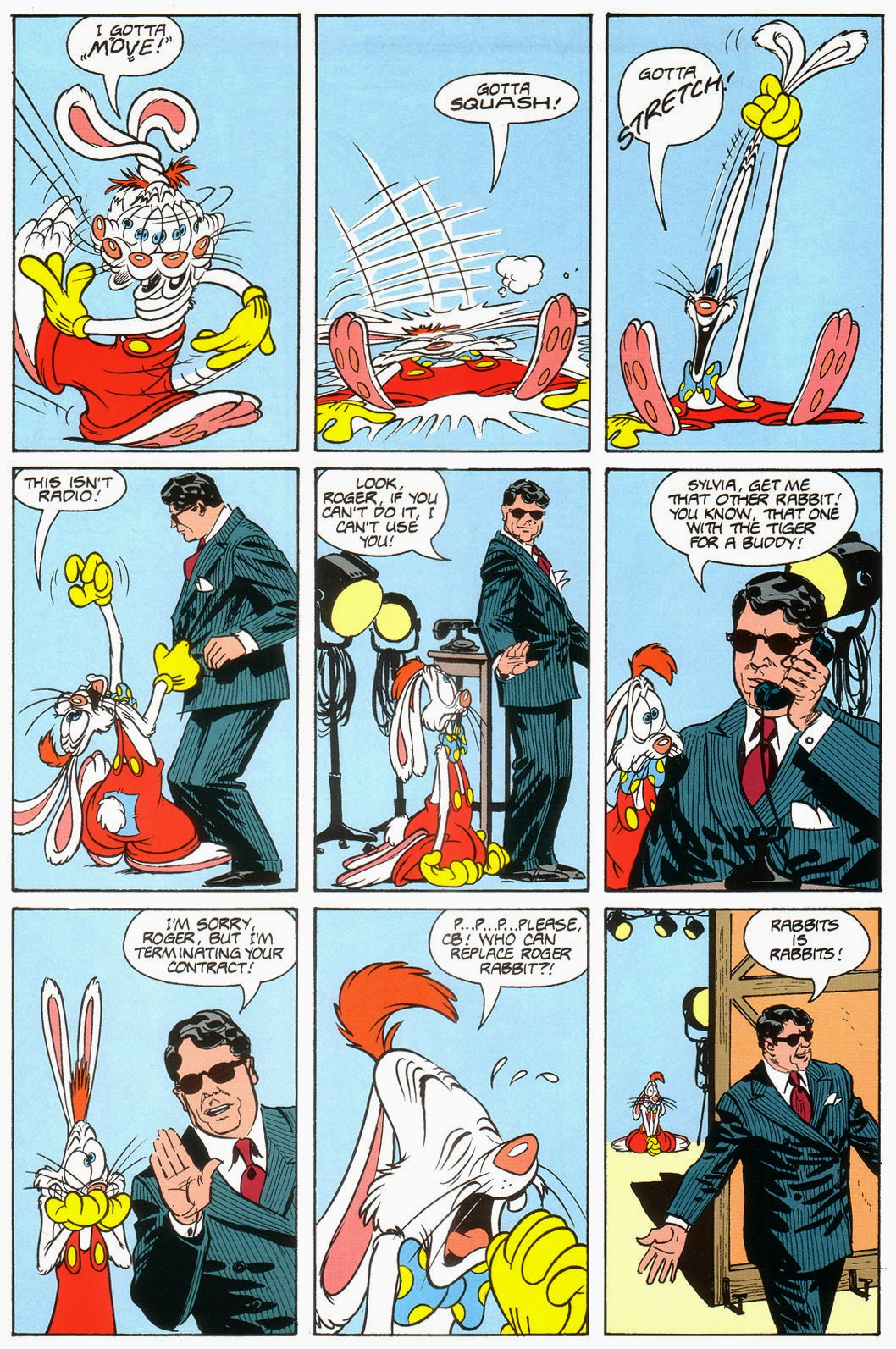