The history of the Spook has had various emulations since his conception, his origins changing depending on how closely the readers were paying attention.  According to the facts, he was either imprisoned for being the only peasant to beat the king at croquet, or for calling the King a two bit, four flushing, dirty, lowdown, indiscriminate clod.  This longwinded insult is usually shortened to just calling him a "Fink", which isn't too surprising due to the King's tyrannical reactions of routinely punishing anybody within earshot.  Whether the Spook's name is really Wellington J. Fransworth Spookingdorf the Third or not, all that elaborate backstory isn't really relevant - he's a man unfairly jailed for a lifetime sentence over a slight misdemeanor who gets his kicks out of hoping to emulate The Count of Monte Cristo someday.

Here then, is my personal list in ascending order, the greatest of Spook's escapes.

This is more of a dishonourable mention than anything.  It features shoddy subpar artwork from the strip's declining years, Turnkey is so distressed by his prisoner's absence that he completely forgets to use the "the" in "The Spook has escaped!", and Spook's ultimate goal is less than inspiring.  It's really here to round things out to a nice even number.  Fortunately, after starting out with the worst, things can only improve from this point here. 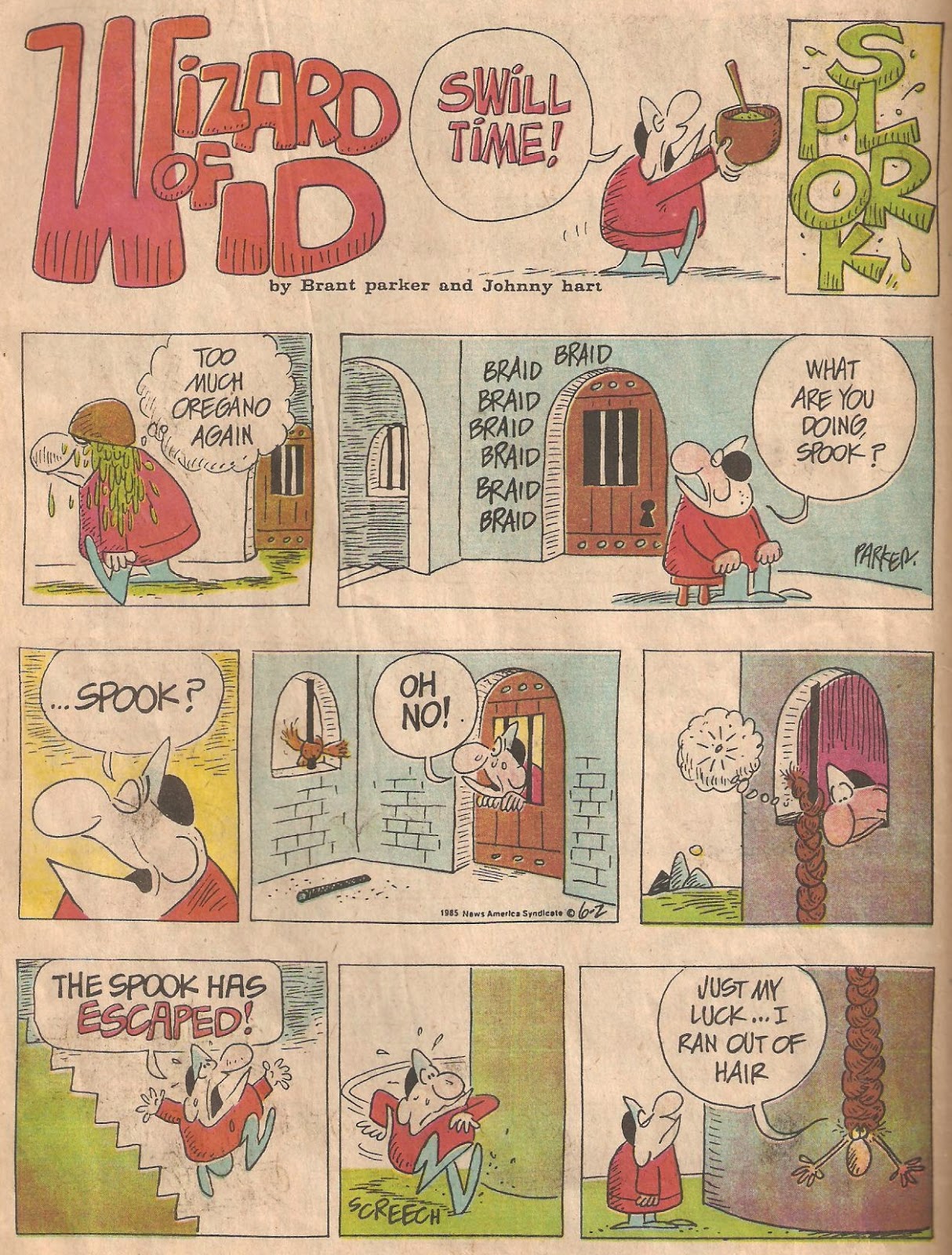 Spook goes to the trouble of making use of his unkempt and neglected body parts in a reverse-Rapunzel way, only to ultimately stumble over the finishing line.  Either he wanted to touch bottom or cover the end of the topknot, it's something of a frustrating exercise.  At least he gets points for trying. 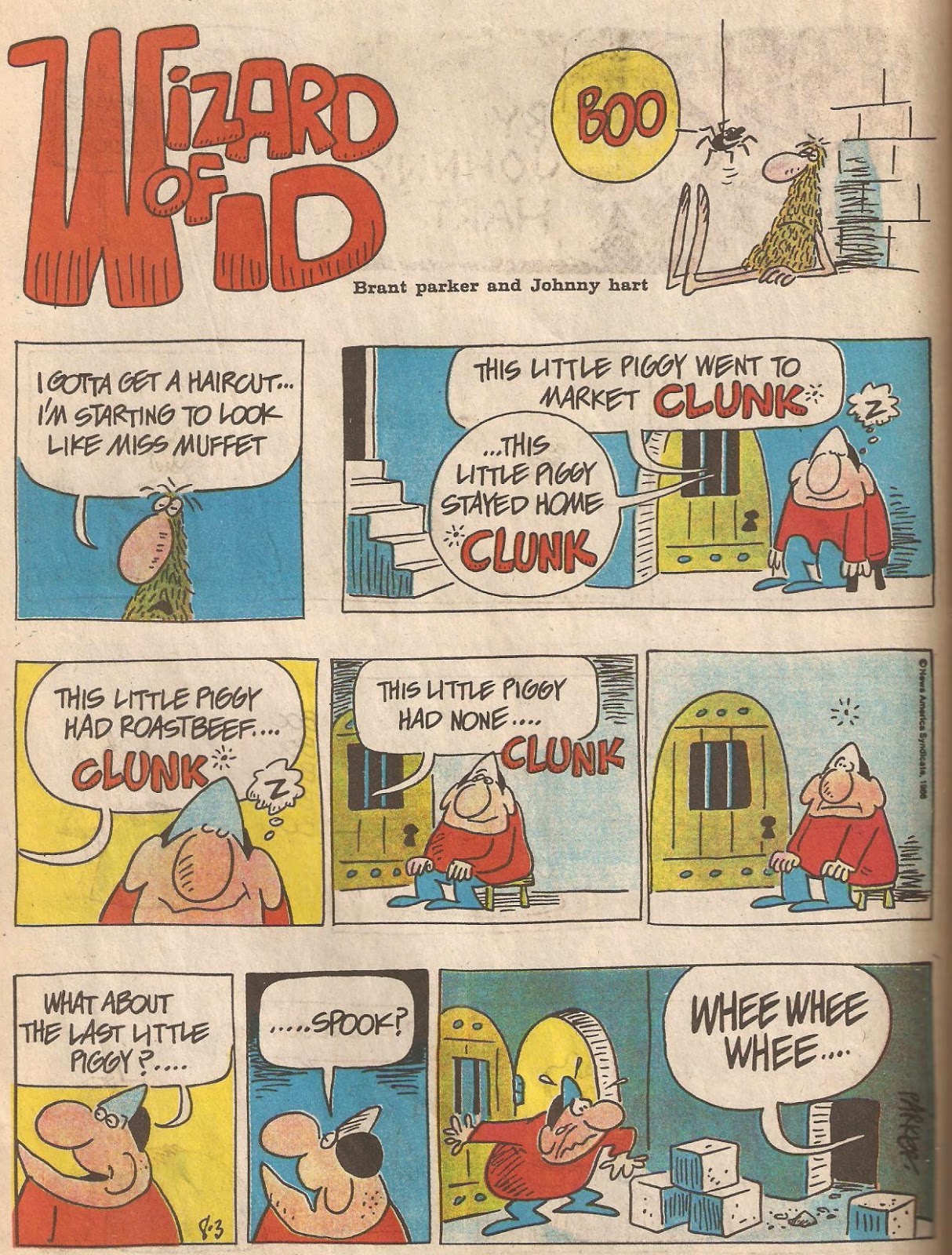 This isn't the first time Spook telegraphs his escape by covering up the noise of his digging activity with seemingly innocuous monologues. 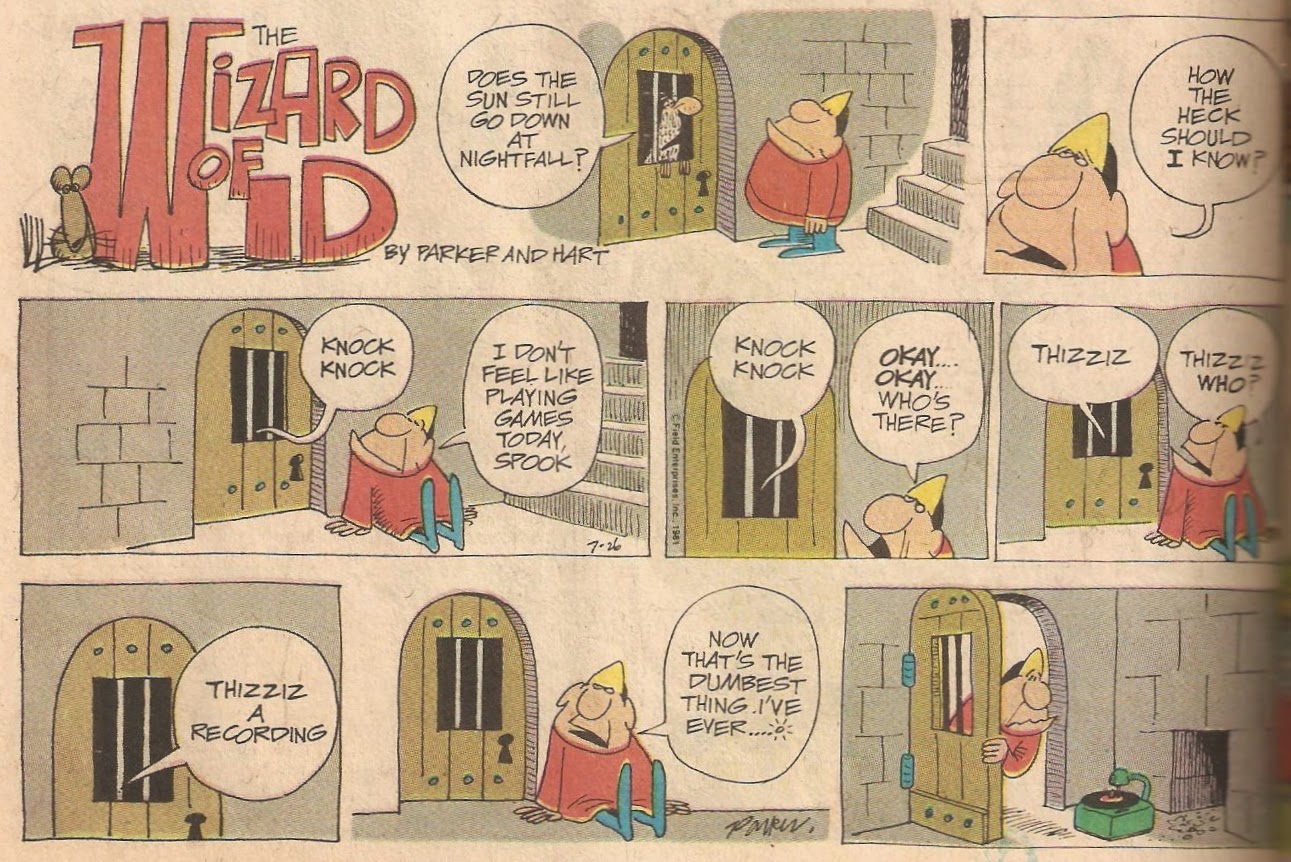 Something of a mixed bag.  He could've left the record on repeat until Turnkey got suspicious, rather than just outright make his lack of presence presence known, but then we wouldn't get the joke until it was too late.  That is, unless the message didn't come in until the very end of the tape, which would've given him more leeway time. 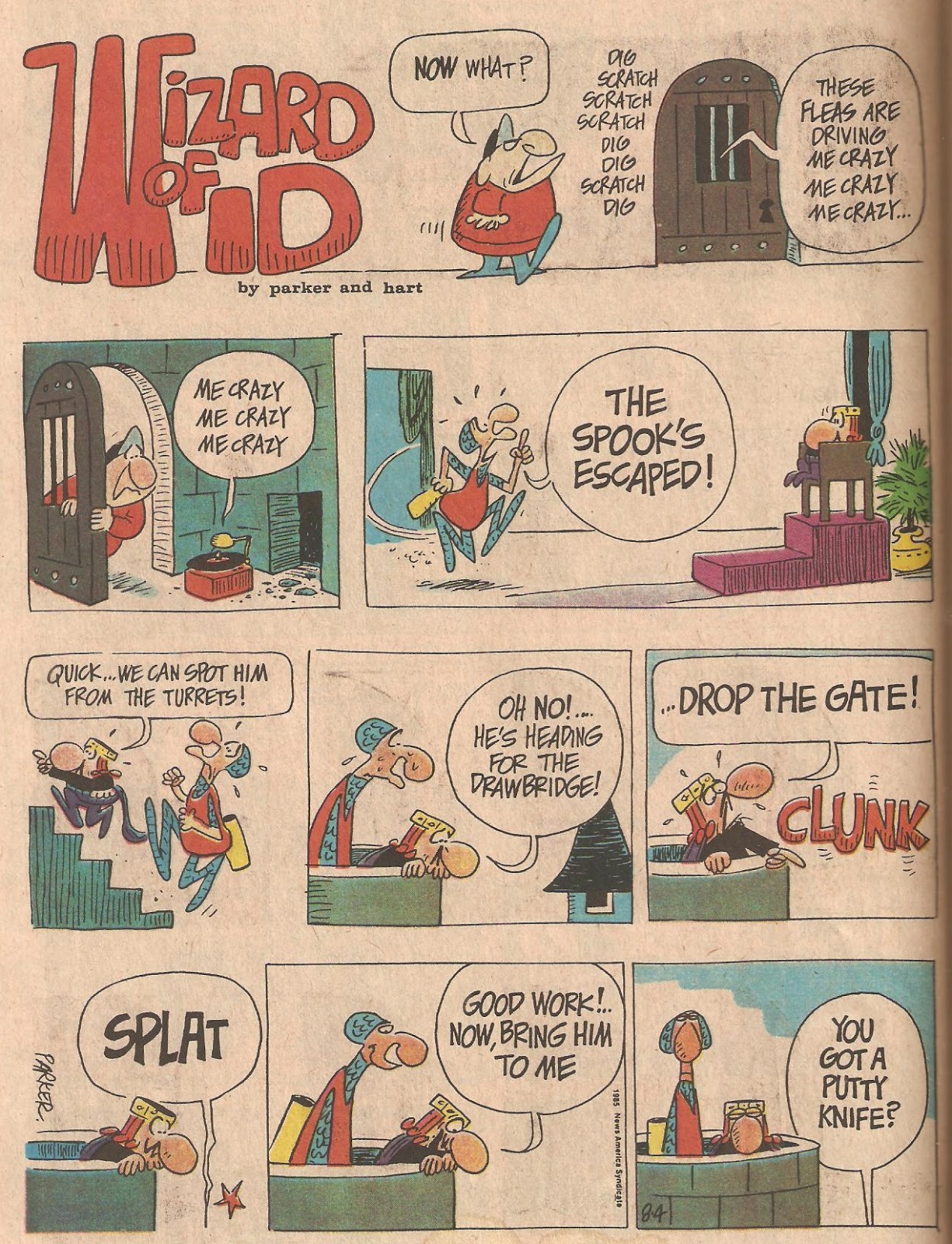 The only reason this is #6 is because it serves as a kind of continuation from the last comic.  At least he seems to have learned from his mistake of covering up reasons for noise in his cell, but not afterthought planning once leaving the confines of the Castle grounds.

It's a sure sign that if there's a single solitary item left in Spook's cell, it should warrant closer investigation. 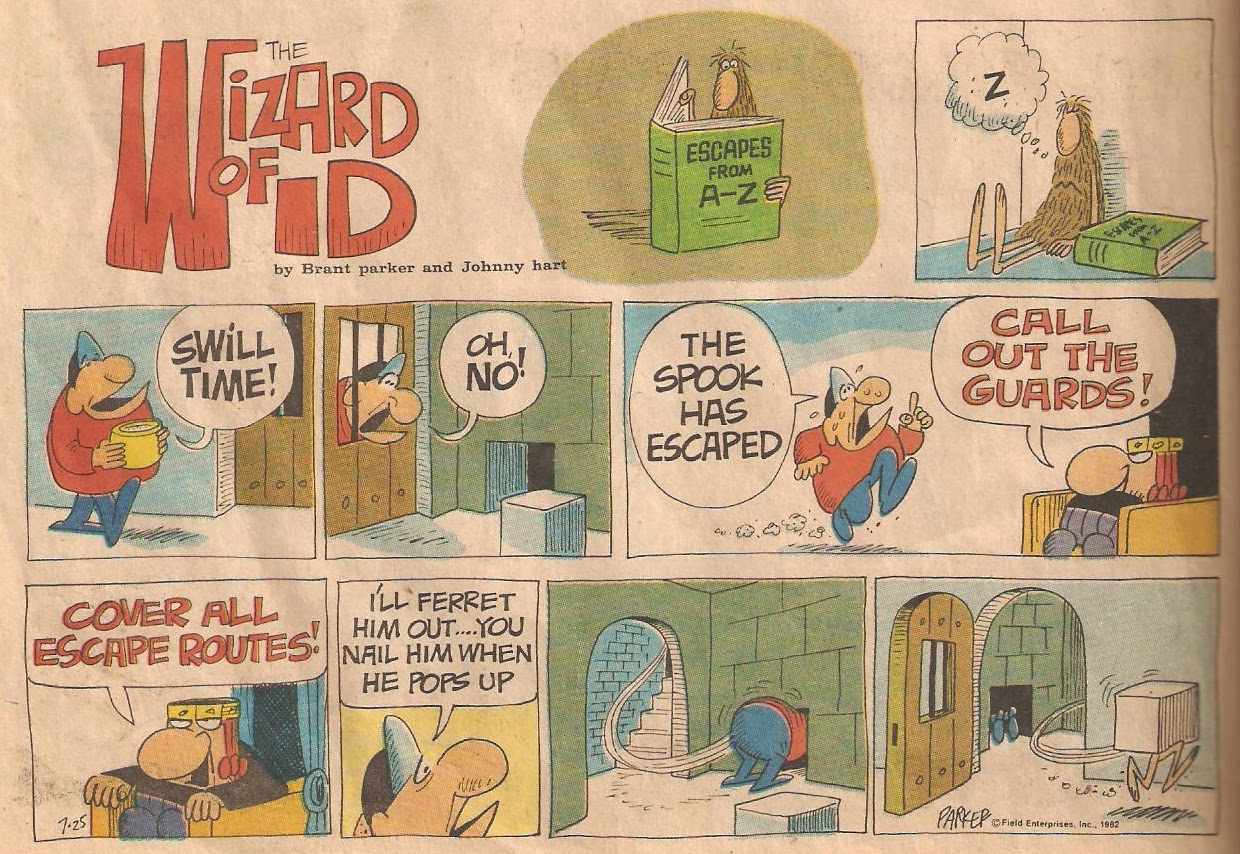 Remember what I said about leftover items in the cell?  Apparently, that applies to cell blocks as well.  Master of subterfuge, this guy. 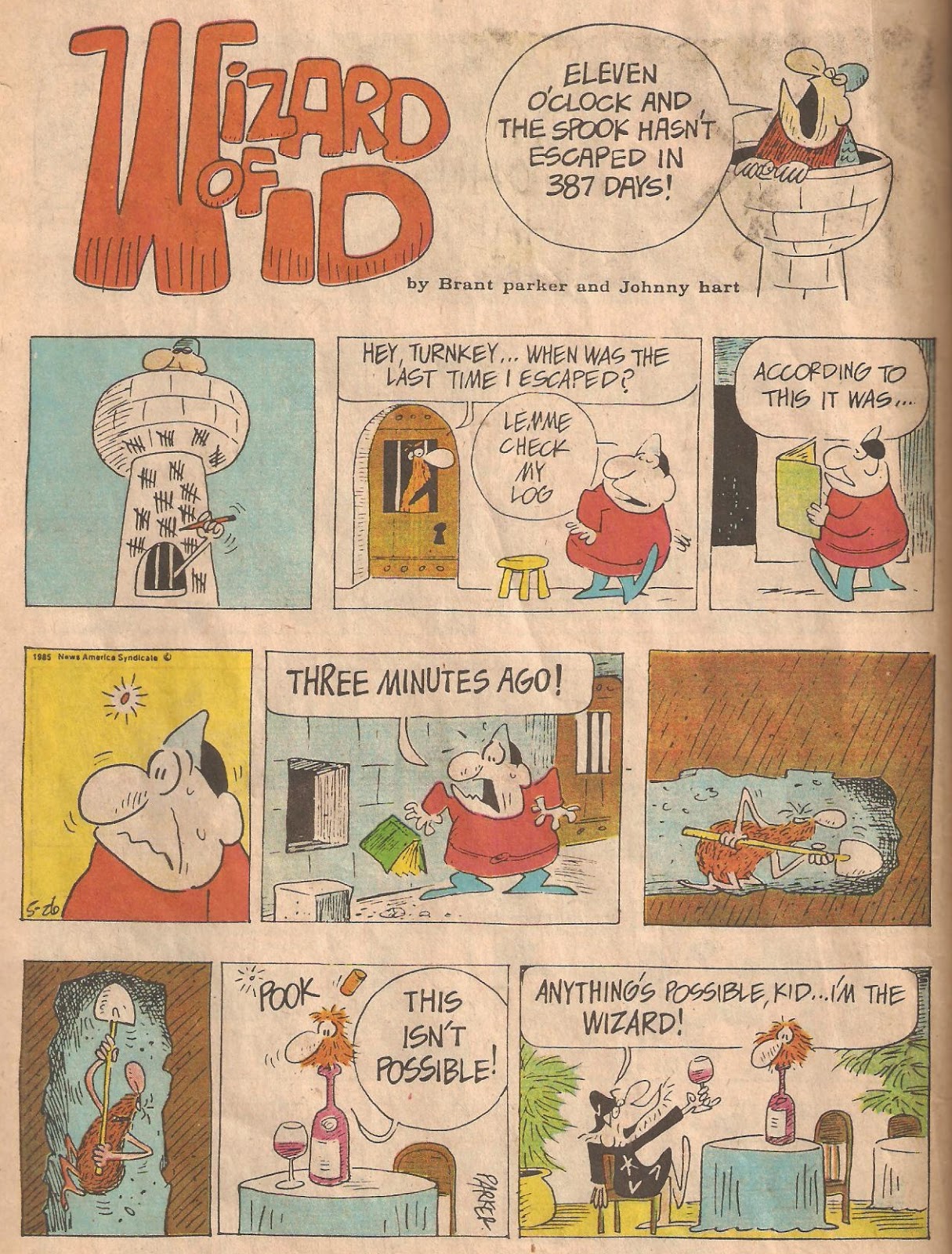 The classic misdirection is nothing terribly original here, but what saves it is the sheer surrealism of the situation, salvaged by a rare appearance of the titular character, whose role is continually eclipsed by the King of Id. 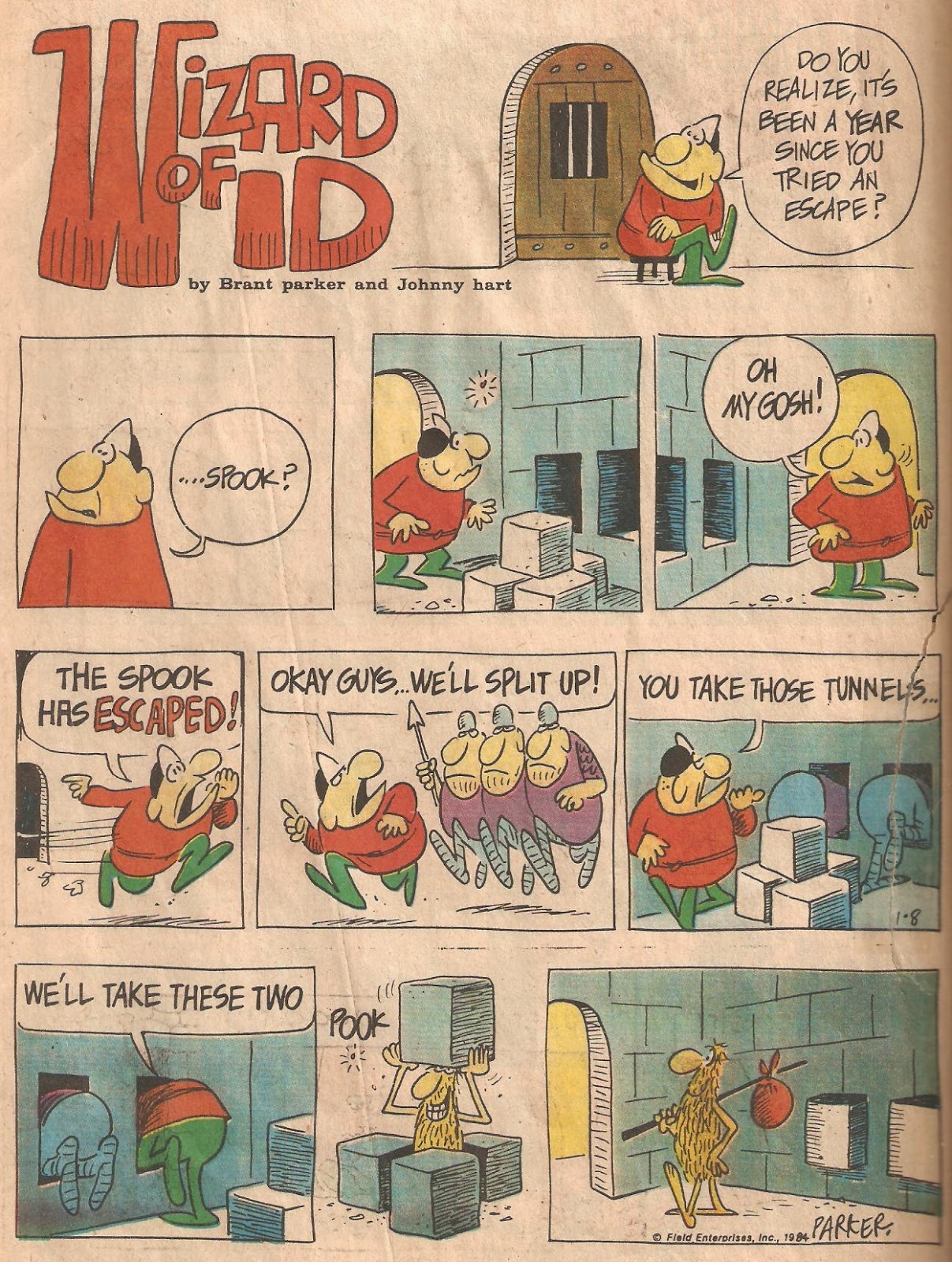 This is overpreparation at its finest.  Spook went all-out by creating not one, but four tunnels, leading Turnkey to call multiple guards to chase after him, and all that is just a distraction to lure his pursuers away as he merrily goes out the front door, having blocked their escapes.  Remember what I said about being suspicious about items left in his cell?  Well, I'm mentioning it again.  His plan worked so well that Turnkey completely forgot to examine the pile of inconspicuous blocks sitting on the floor.  The amount of effort needed to dig four false tunnels must've taken a long time, but was worth it in the long run. 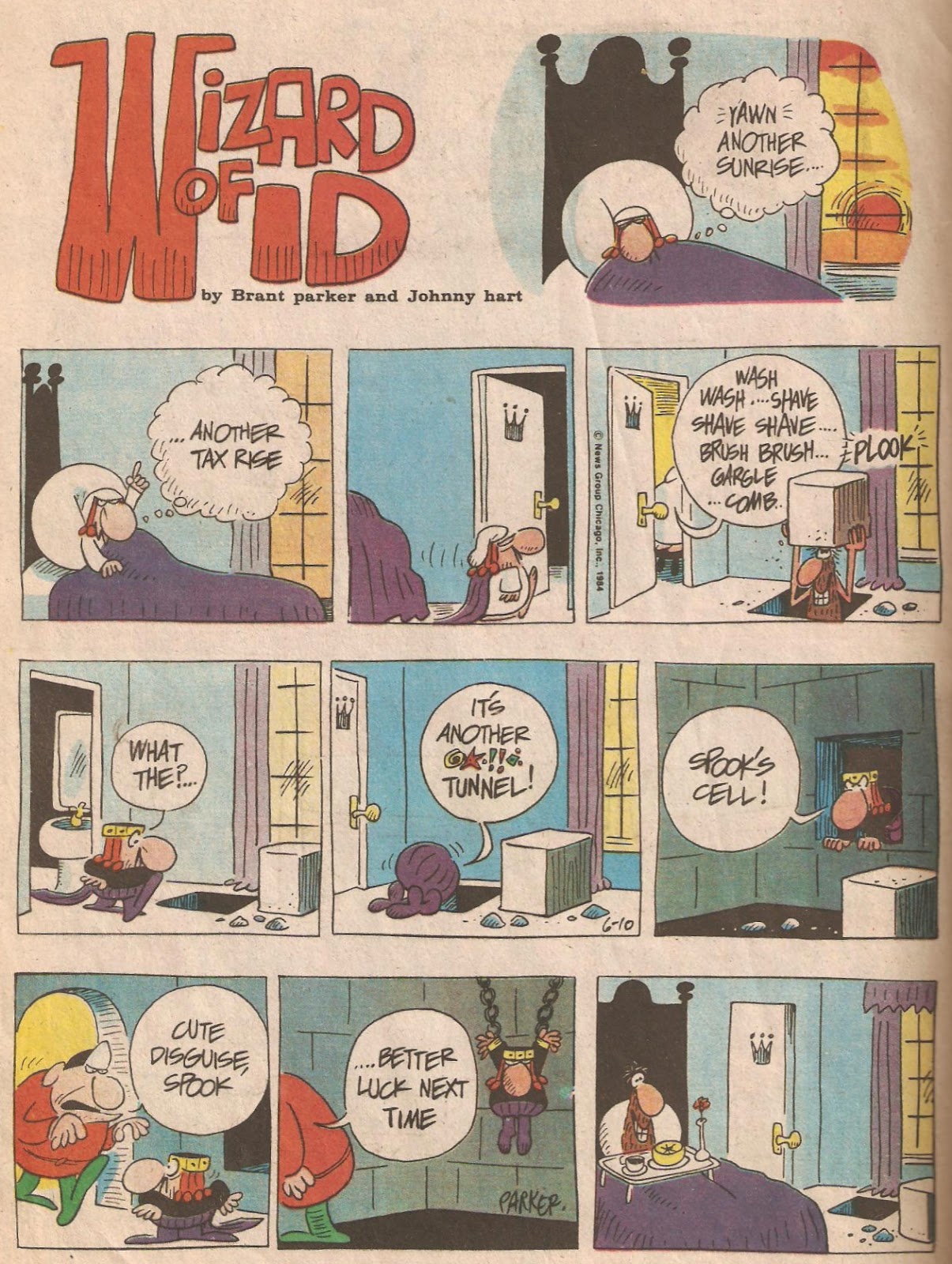 I defy anyone to find a better escape than this.  Spook not only manages to escape from the confines of his cell, but also winds up framing the King due to his reputation preceding him, and getting some quality breakfast in the meantime.  Sure, because of the restraints of reverting back to the status quo, they'll eventually find out their little mistake, but not before the King does his routine torturing of his staff for letting him get locked up for so long.

In closing, some honourable mentions that didn't quite make the cut: 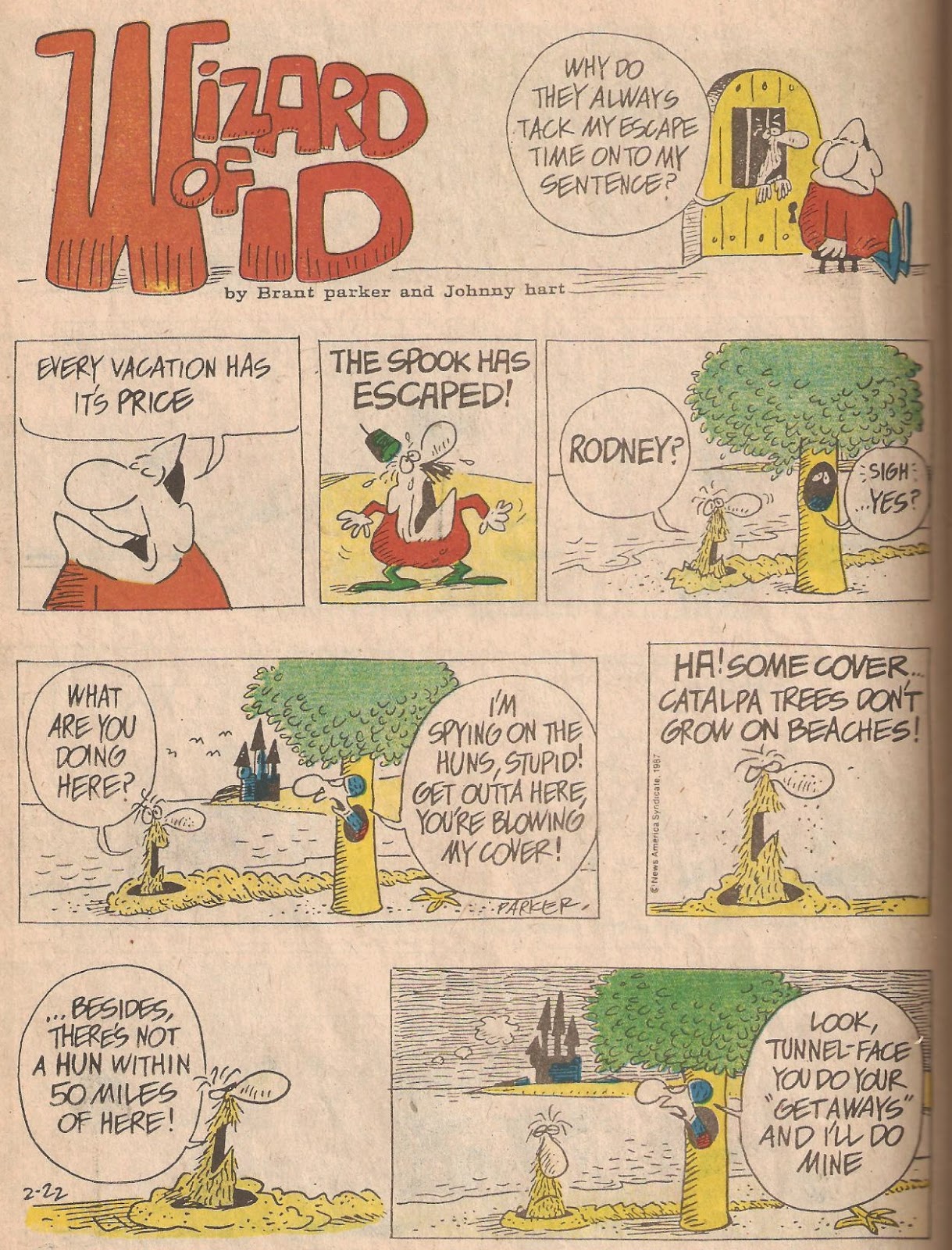 This is one of the rare time that the Spook talks to someone in the Castle that isn't regulated to his warden.  It's somewhat comforting to think that the Spook is so familiar with the Castle staff that he's able to indulge in casual conversation with failed knight Rodney while out on an attempted escape, post even as he's already left the Castle grounds.  (Probably the most successful escape attempt ever shown)  Also noteworthy is that Spook's time in his cell hasn't diminished his intellect one bit.  It's also telling that Rodney neither makes any futile attempt to go after the Spook, and the Spook admonishes Rodney for failing to be as covert at his spying as he should be.  Would that we could get more interactions with characters outside their home environments.

And two holiday-specific comics that address the Spook's abscondence after the fact. 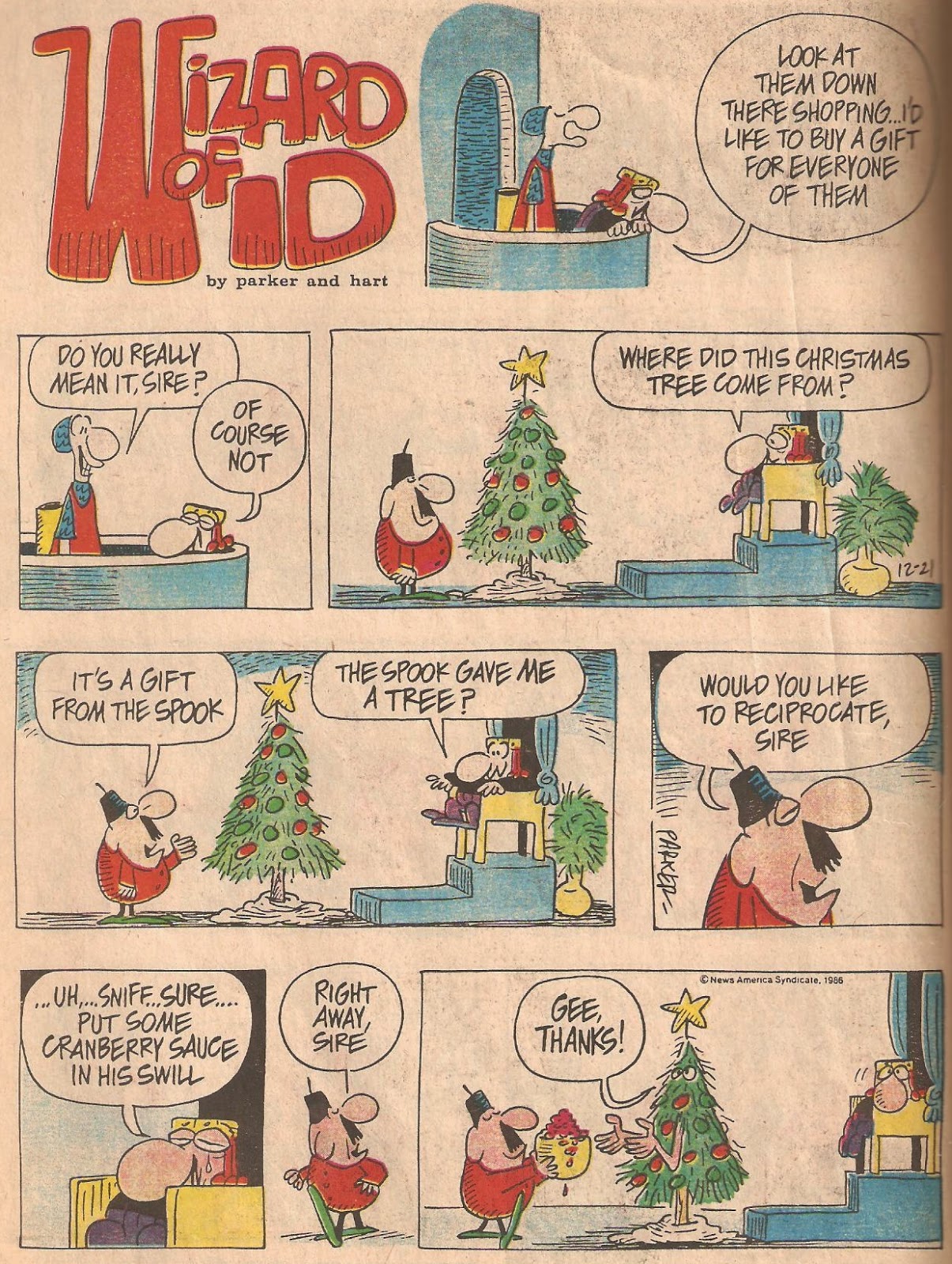