Rising From the Graves

Every time I think I've found the last of my early comics, something happens to prove me wrong.  A helpful commentor pointed out that there were eBay auctions of the very Gazette comics I so coveted.  Not willing to let a chance pass up (but not shameless to bargain down the prices either), I searched around and found that there were other potential sellers of some missing issues from my childhood.  I'll be posting about these comics in future posts, but for now, let's examine Pat Brady's first comic again.  Unlike last time, I have an abundance of comics to choose from, so rather than show them all, I'm able to cherry pick the best examples to use. 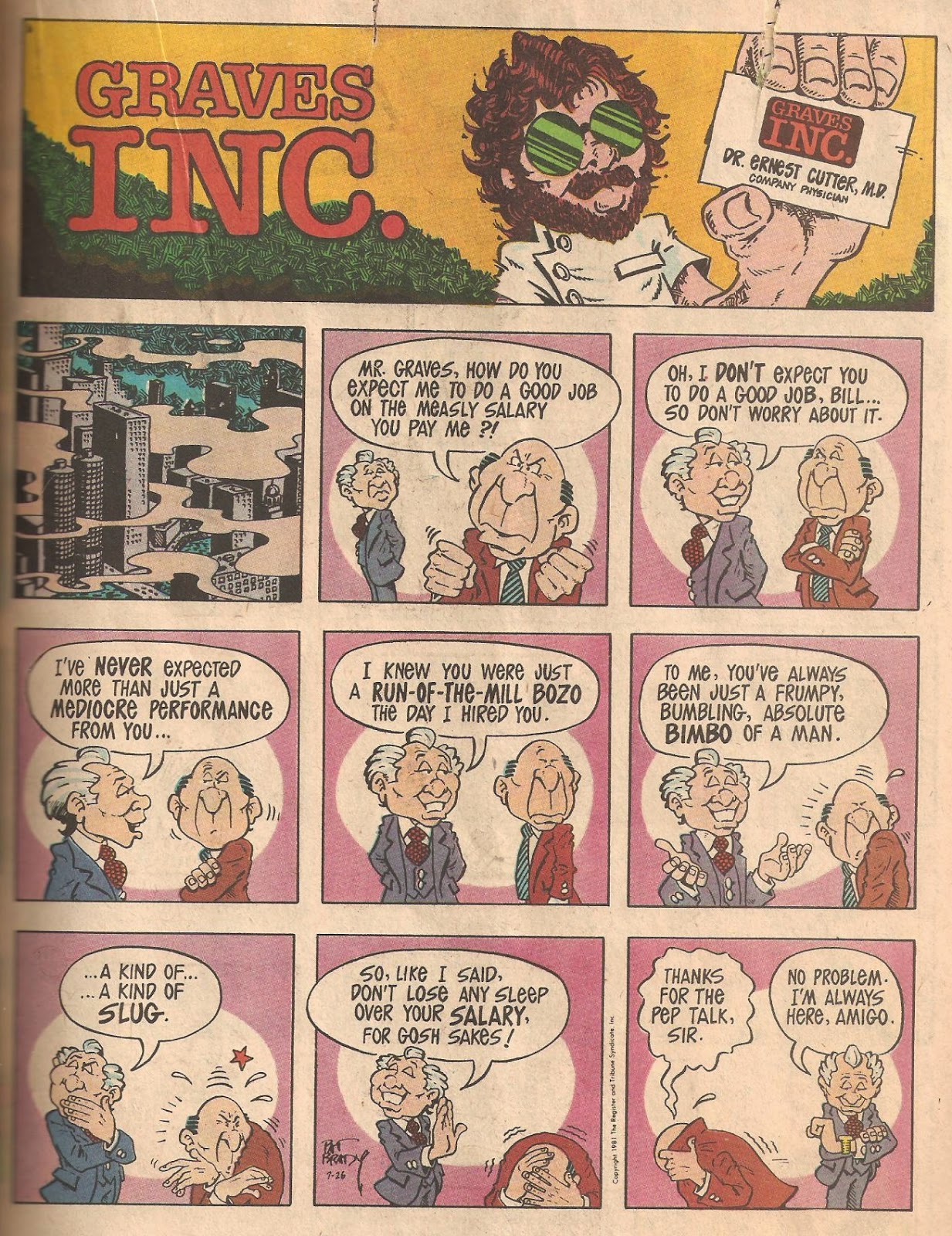 This is the earliest Graves comic I can find, which is evidenced by the full-page spread, compared to the half-sized form of later installments. 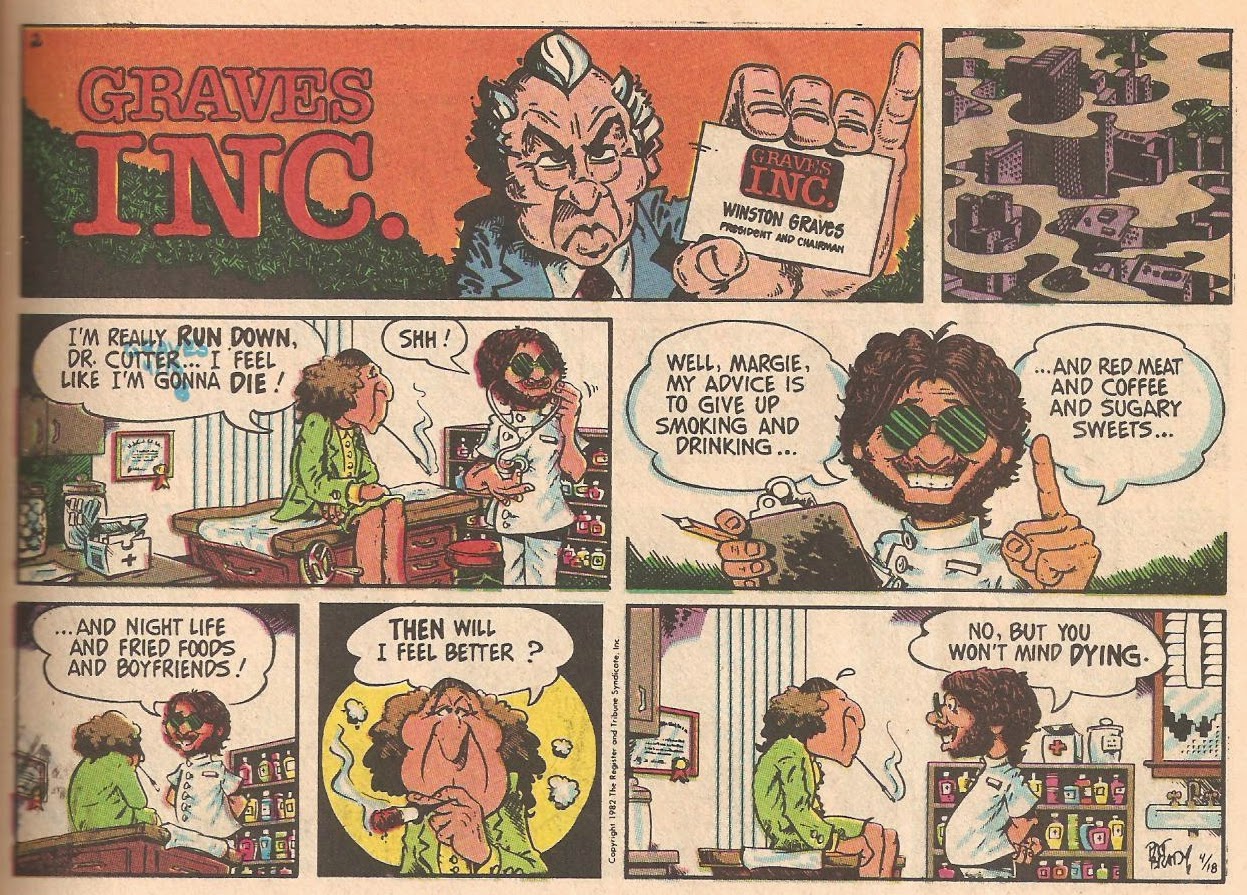 We also get a chance to see the ever-elusive doctor, and he's just as effective on his job as his co-workers. 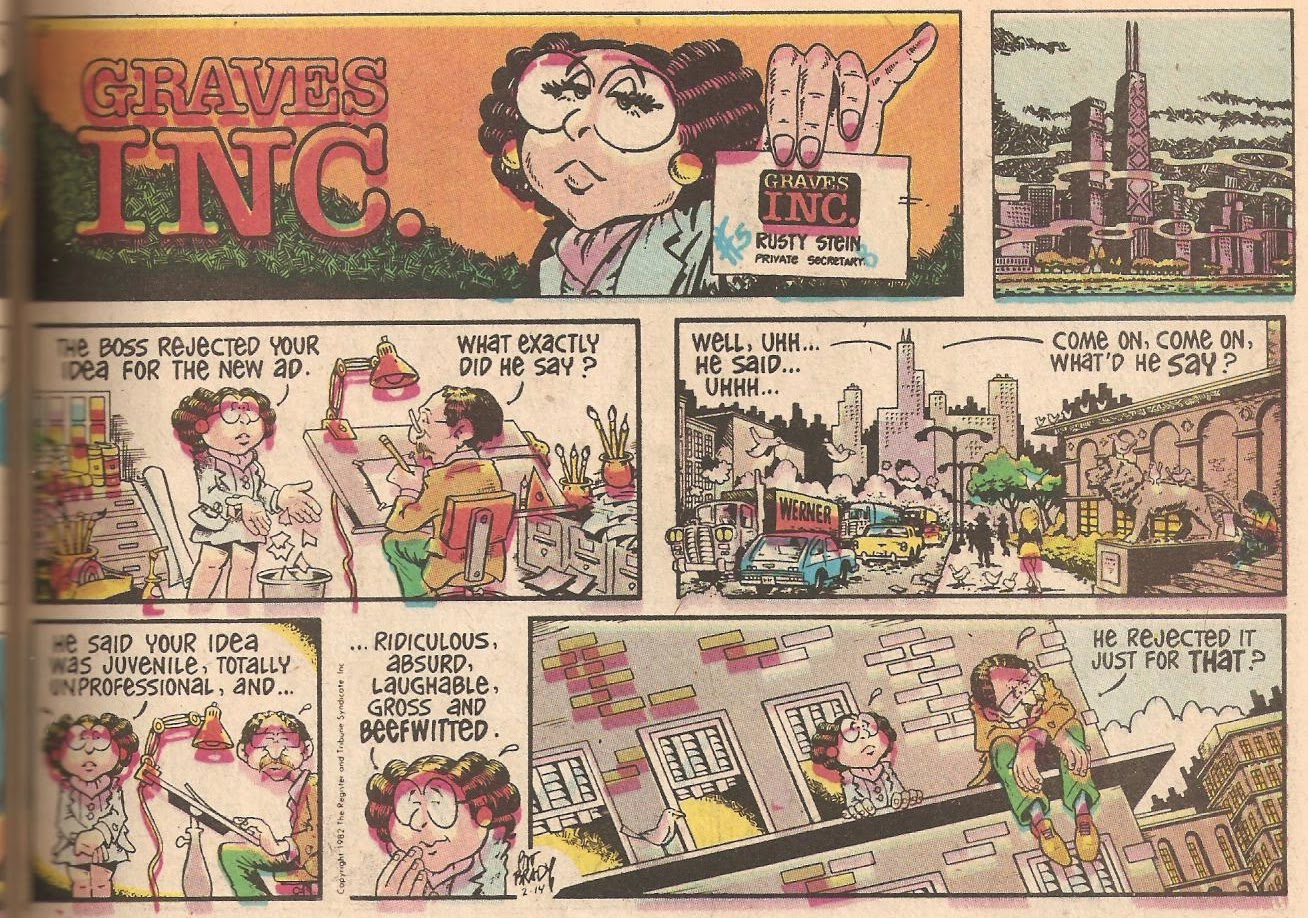 Last time, I regretted that I was missing the throwaway title panel of the secretary, and I'm pleased to present the business card (with extended pinky) in all its glory. 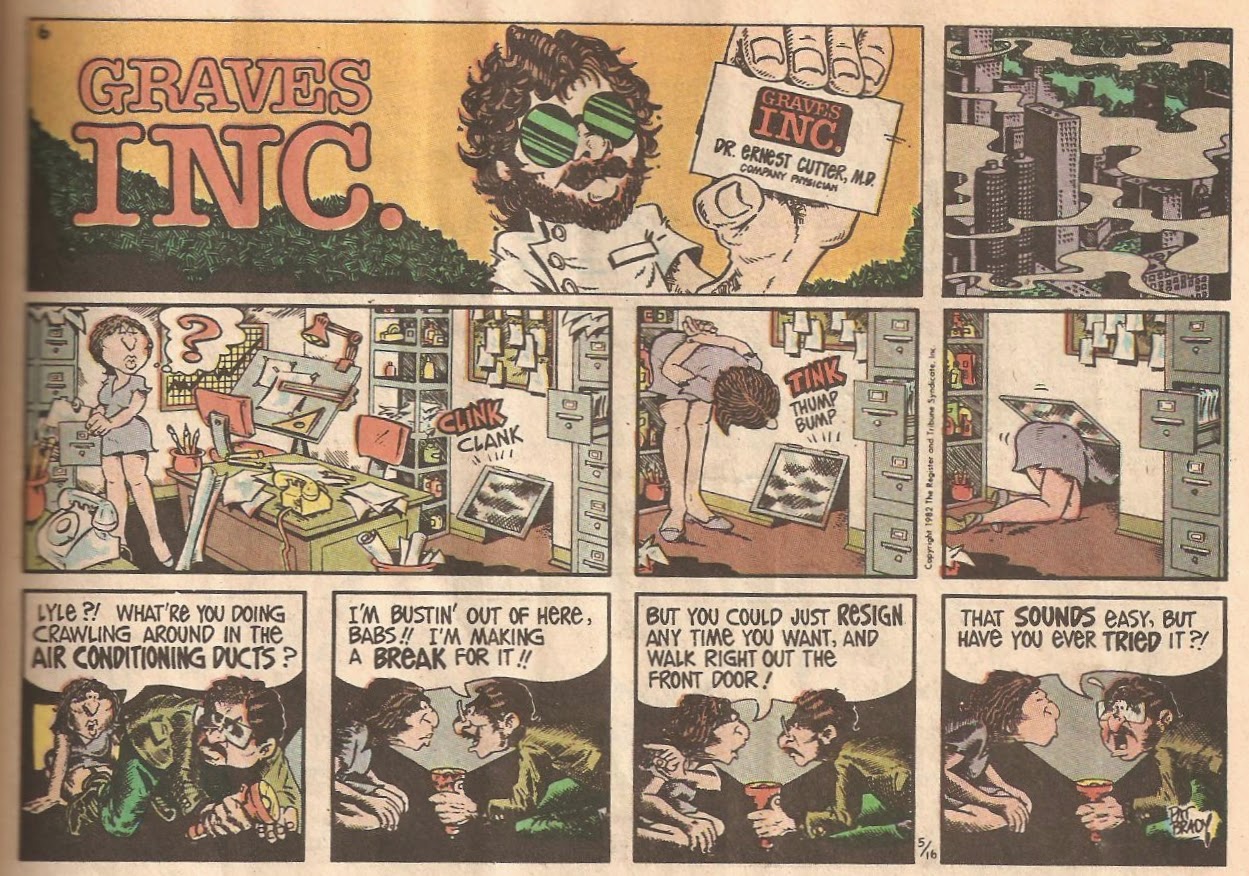 Sadly, the other woman on the far end of the cast title panel, Babs Gumbel, is still absent, and save for a rare appearance (she seems to be assistant to tortured artist Lyle Bottoms), her presence is outshined by the more dominant unsung force of the company, Margie. 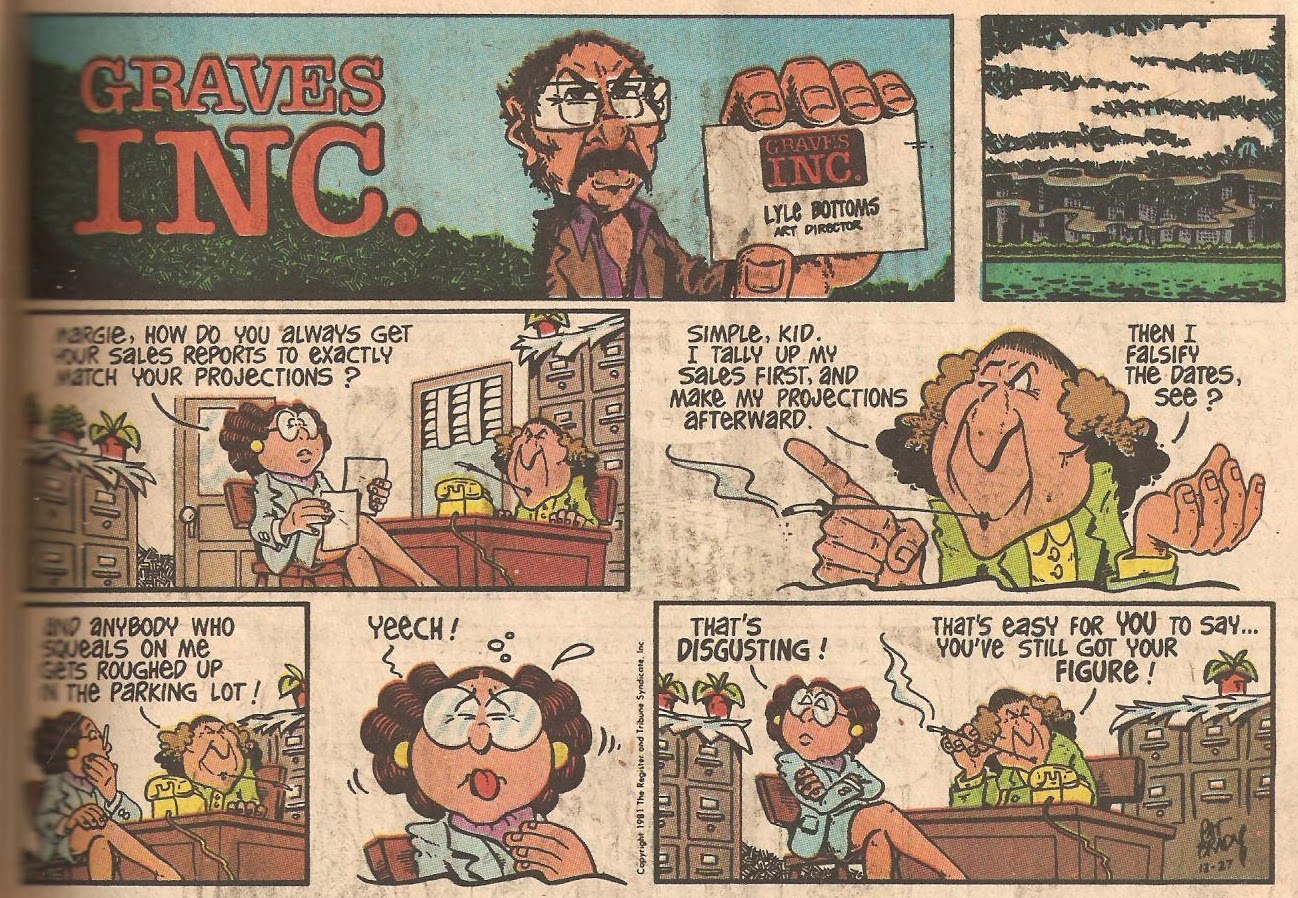 This actually manages to pass the Bechdel test. 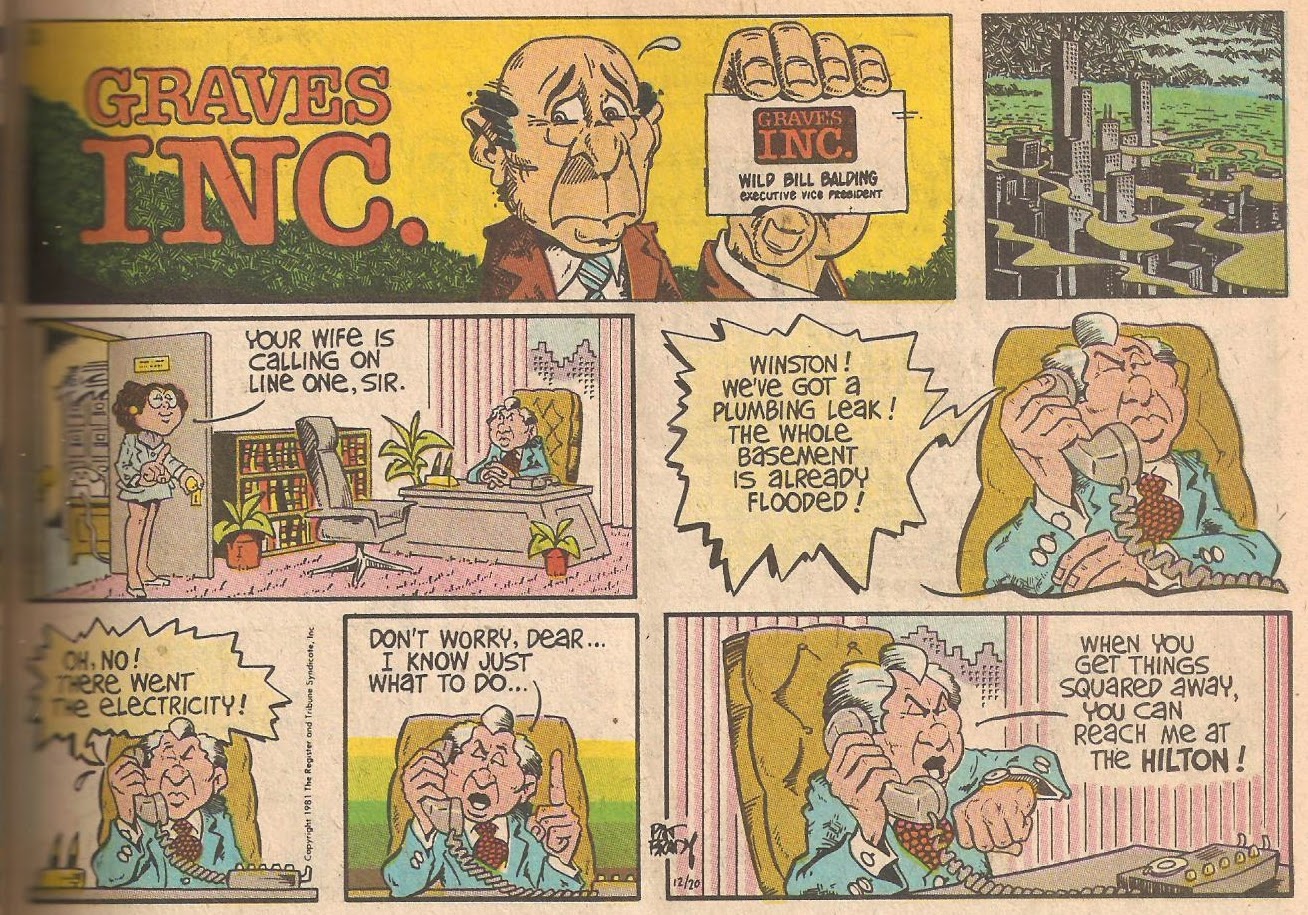 As you can tell, Graves is as much as a cold fish towards his wife as he is to his co-workers.  Part of the problem stems is that he treats his family as extensions of his job. 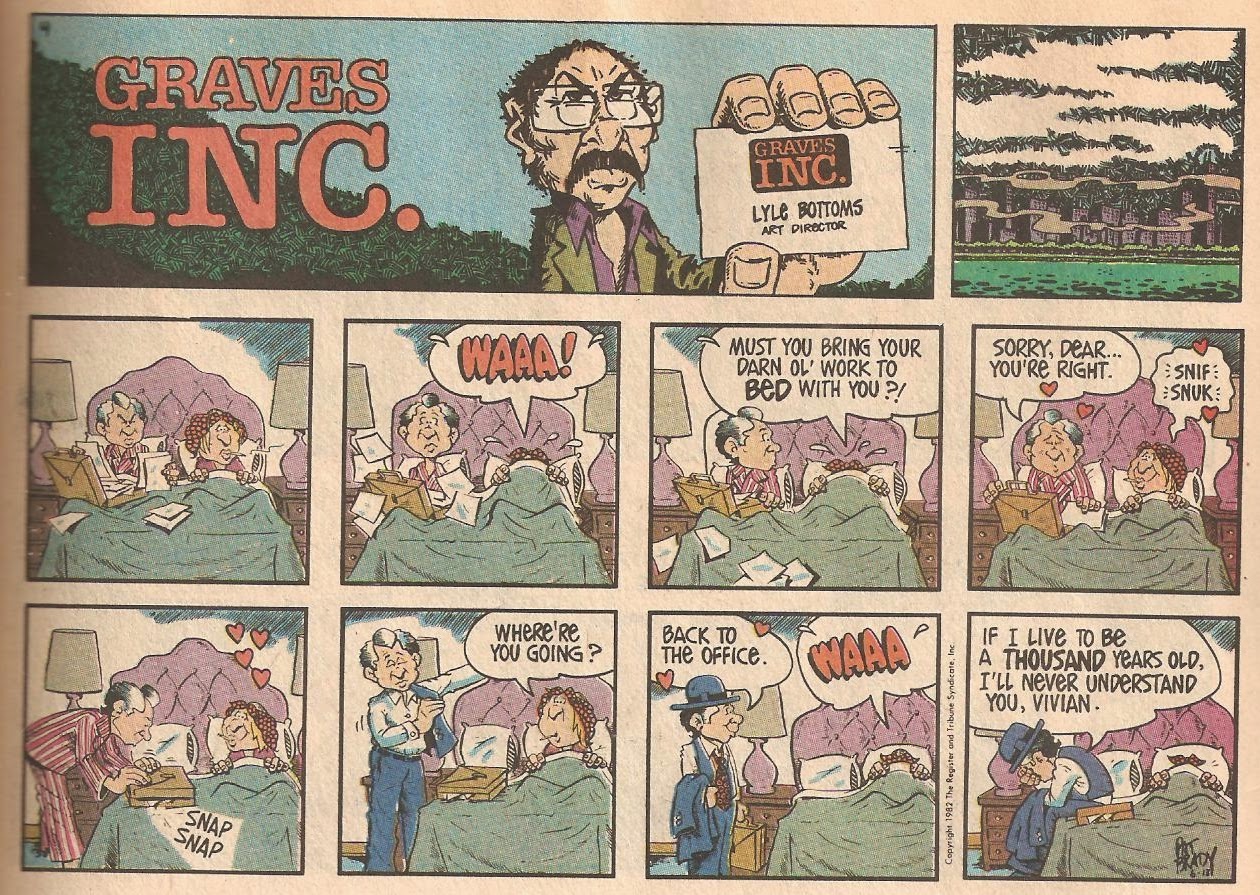 You'd think such a loving personality would demand that any relatives wanting to make a position for themselves in his company would insist that they start off at the very bottom, somewhere below boot-polishing the mailing staff, and work their way rising up through the ranks so that when they're old and bitter enough to venture a hostile takeover of their old man, they'll have enough of a killing business instinct to do the job. 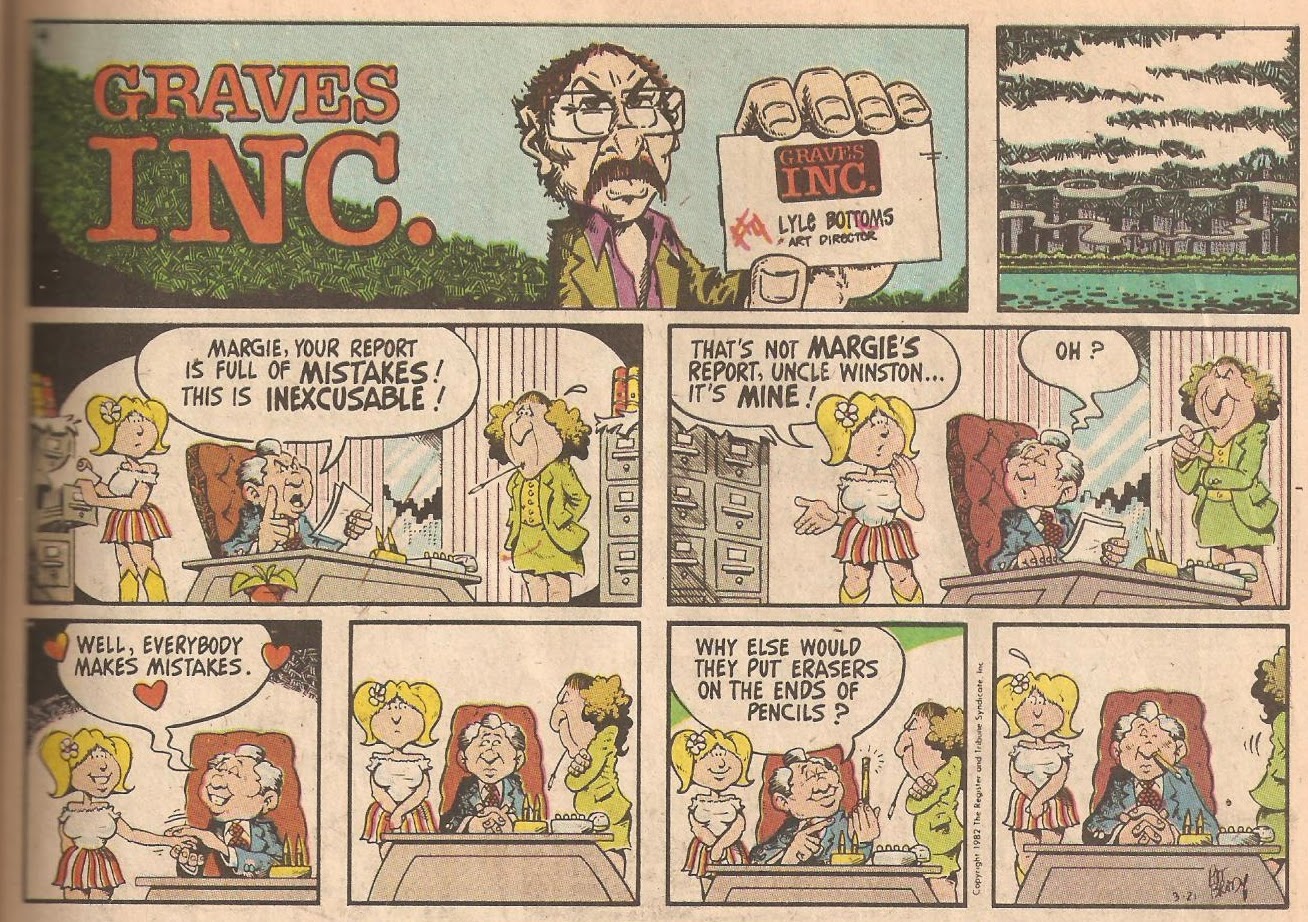 Sadly, this turns out to be something of a blind spot towards his niece, and he winds up being just like every other executive out there.  As awful as the boss and founder of Graves Inc. is, he's at least more efficient at doing his job than the role of his second-in-command. 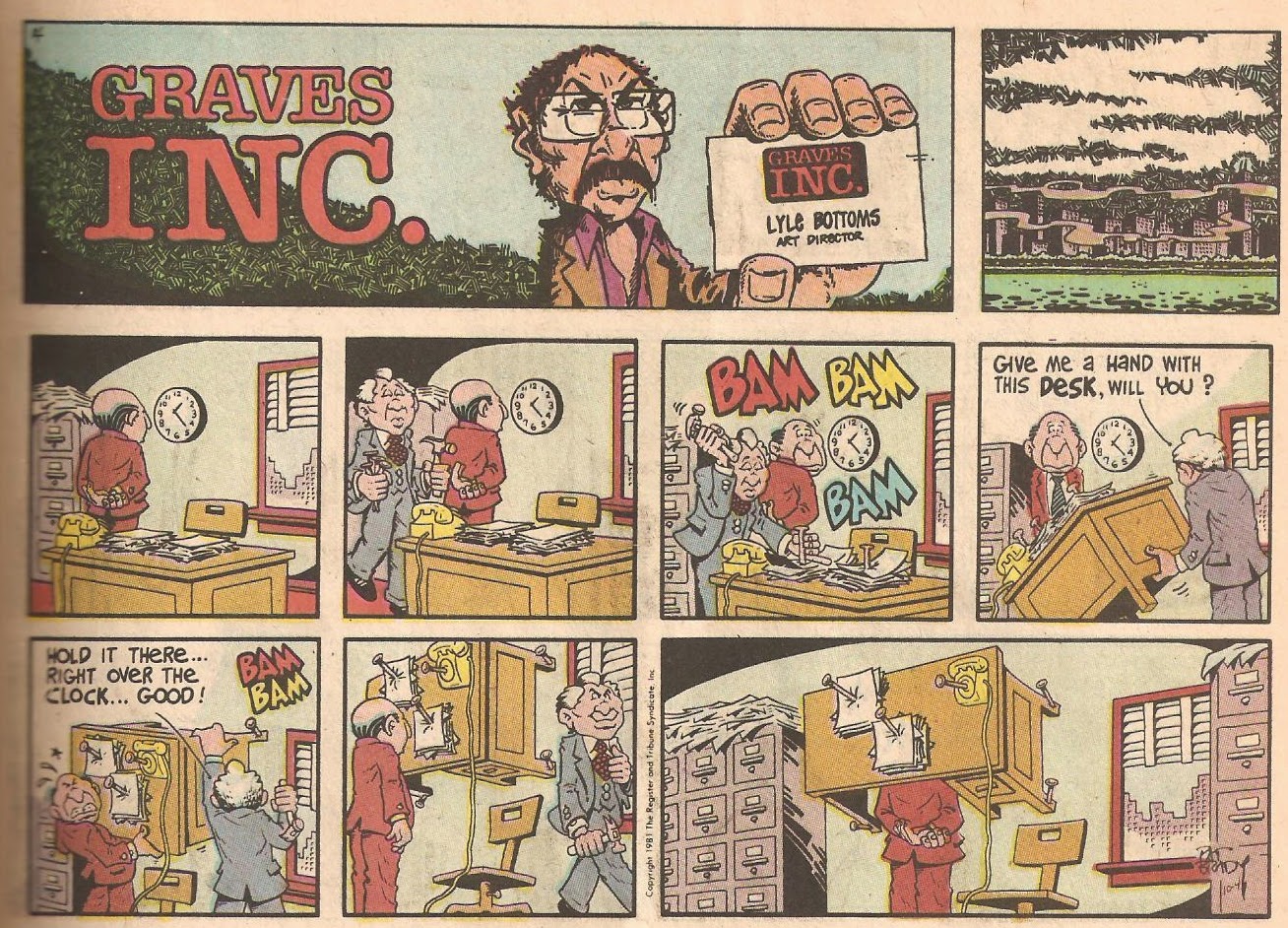 For all his ineffectiveness at the company, the Vice President Wild Bill Balding is something of a regular Clockaholic, despite his co-worker's best attempts to circumvent his efforts. 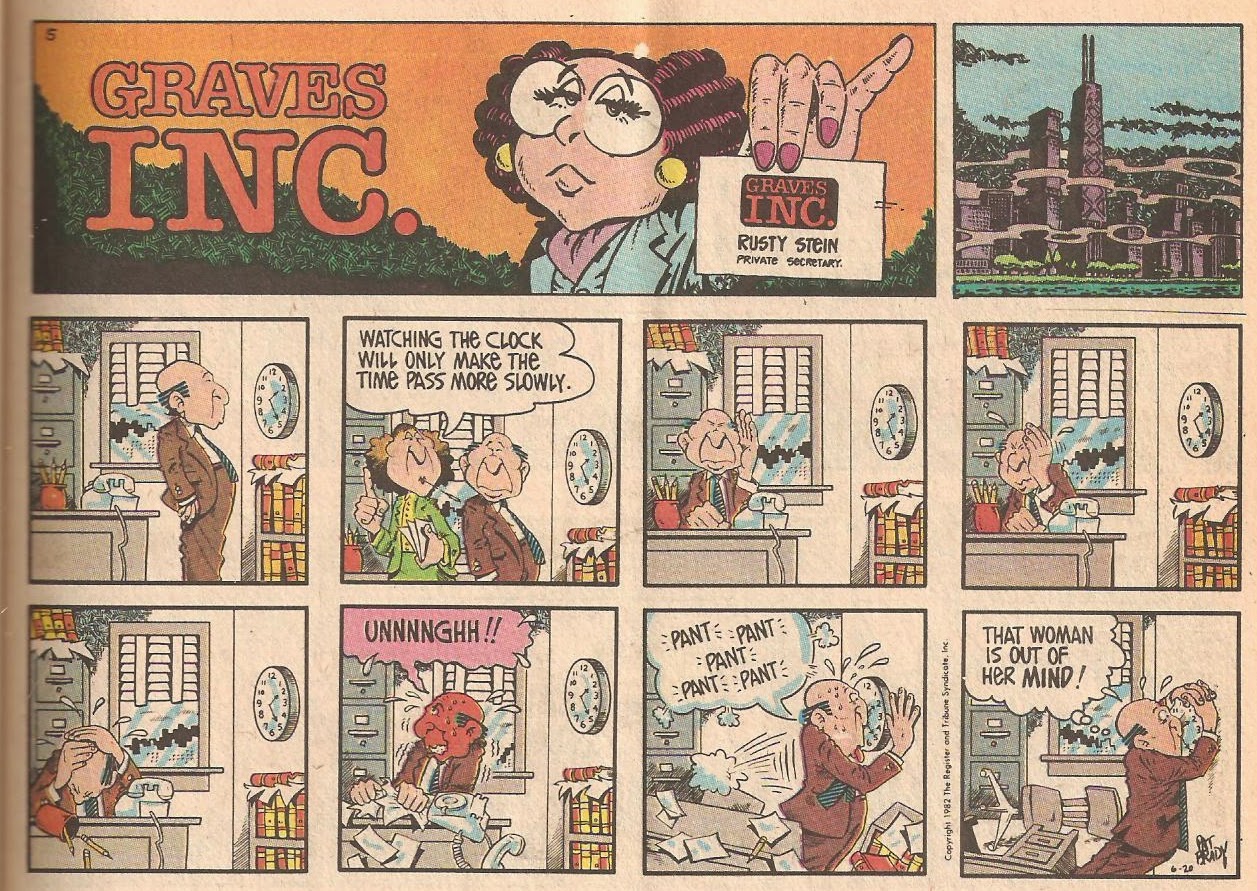 shows no great love towards his boss. 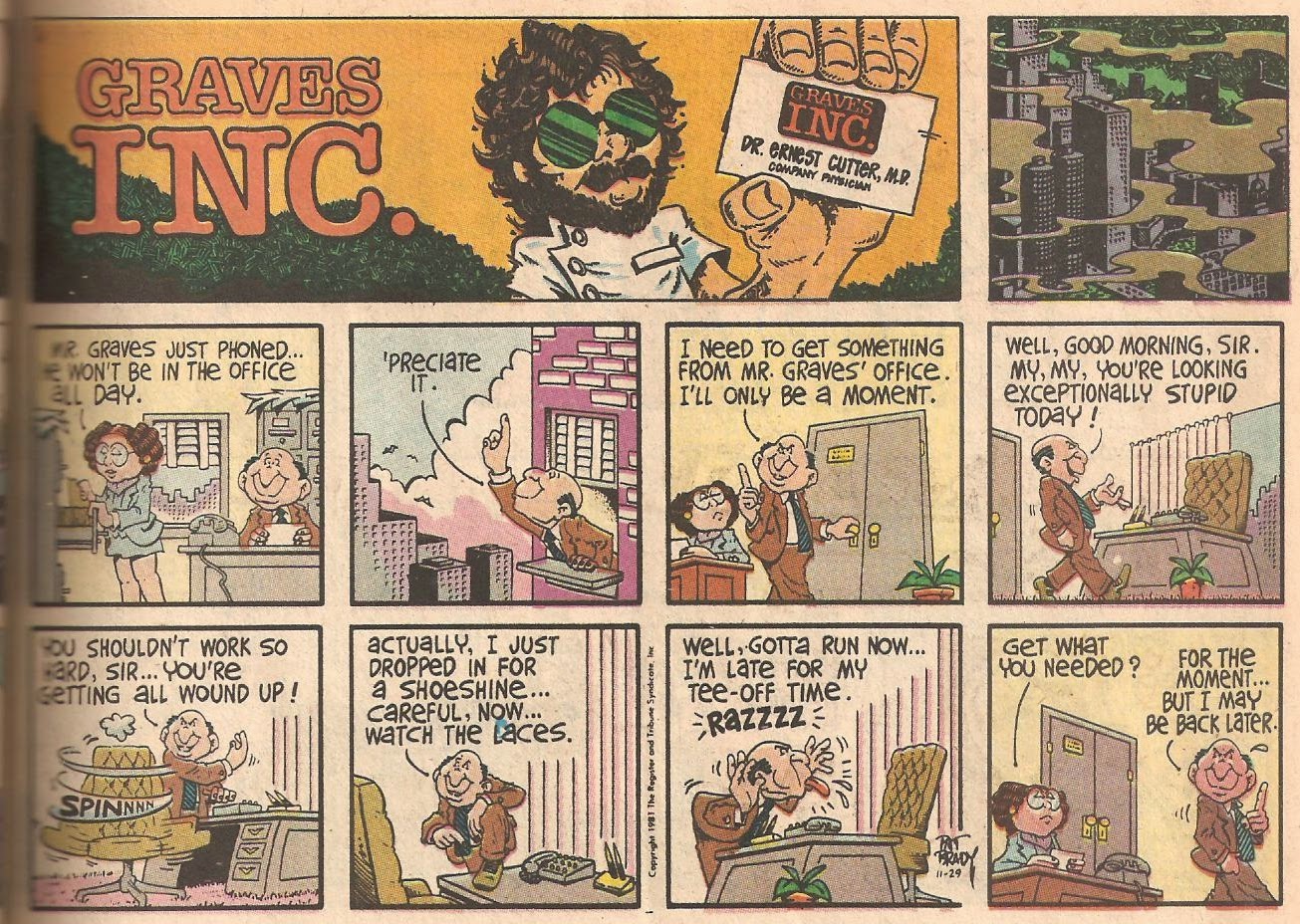 It's a good thing his actions are limited to brief displays of rebellion, because if he ever got the chance to display any semblance of power, he would abuse it to the full extent of his authority.  Much like Royalty, his presence is mostly as a figurehead rather than doing anything that could be considered helpful to the company. 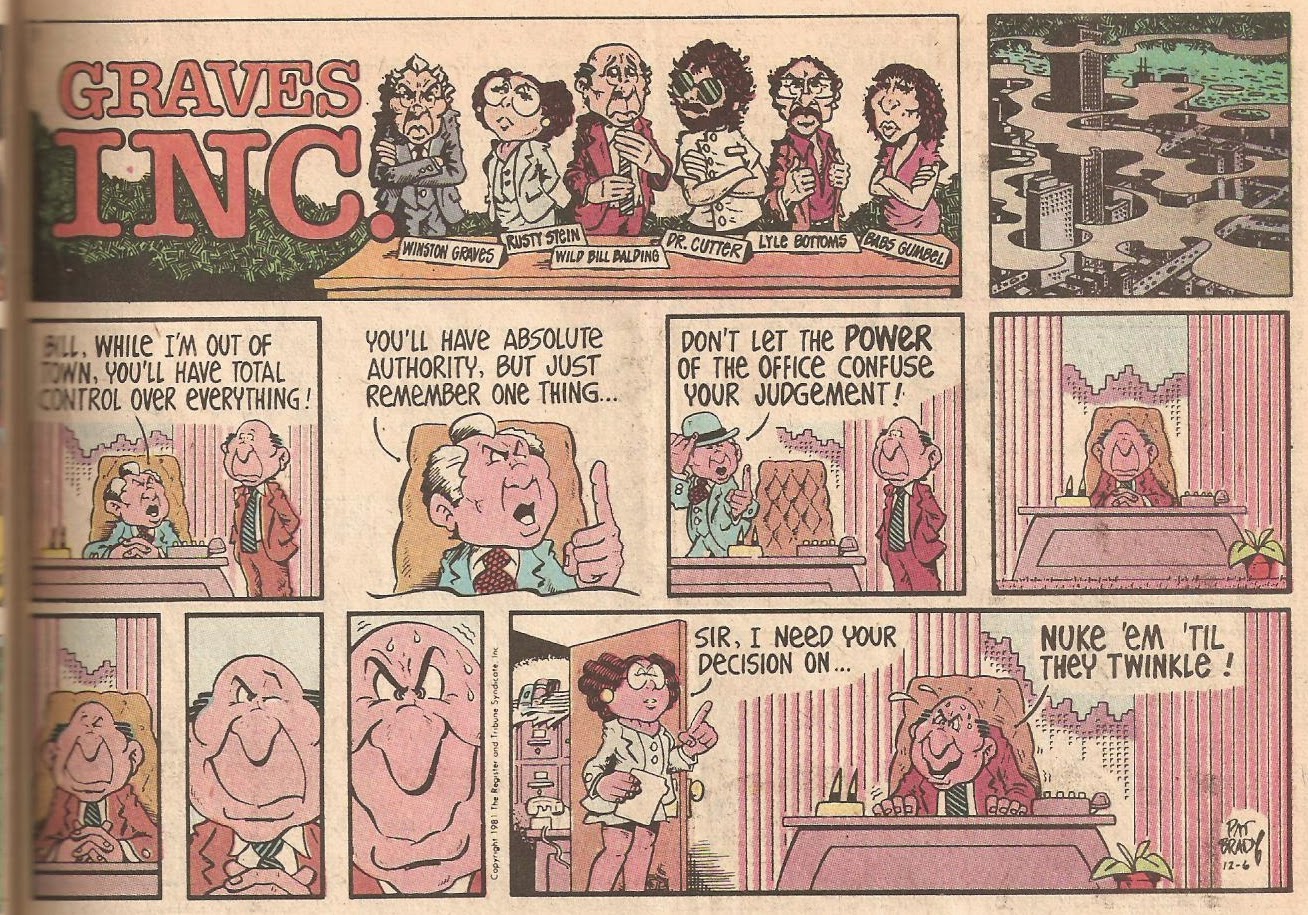 And when he actually does have the chance to do something helpful, chances are there'll be some small overlooked detail that'll undo all the hard work he's done. 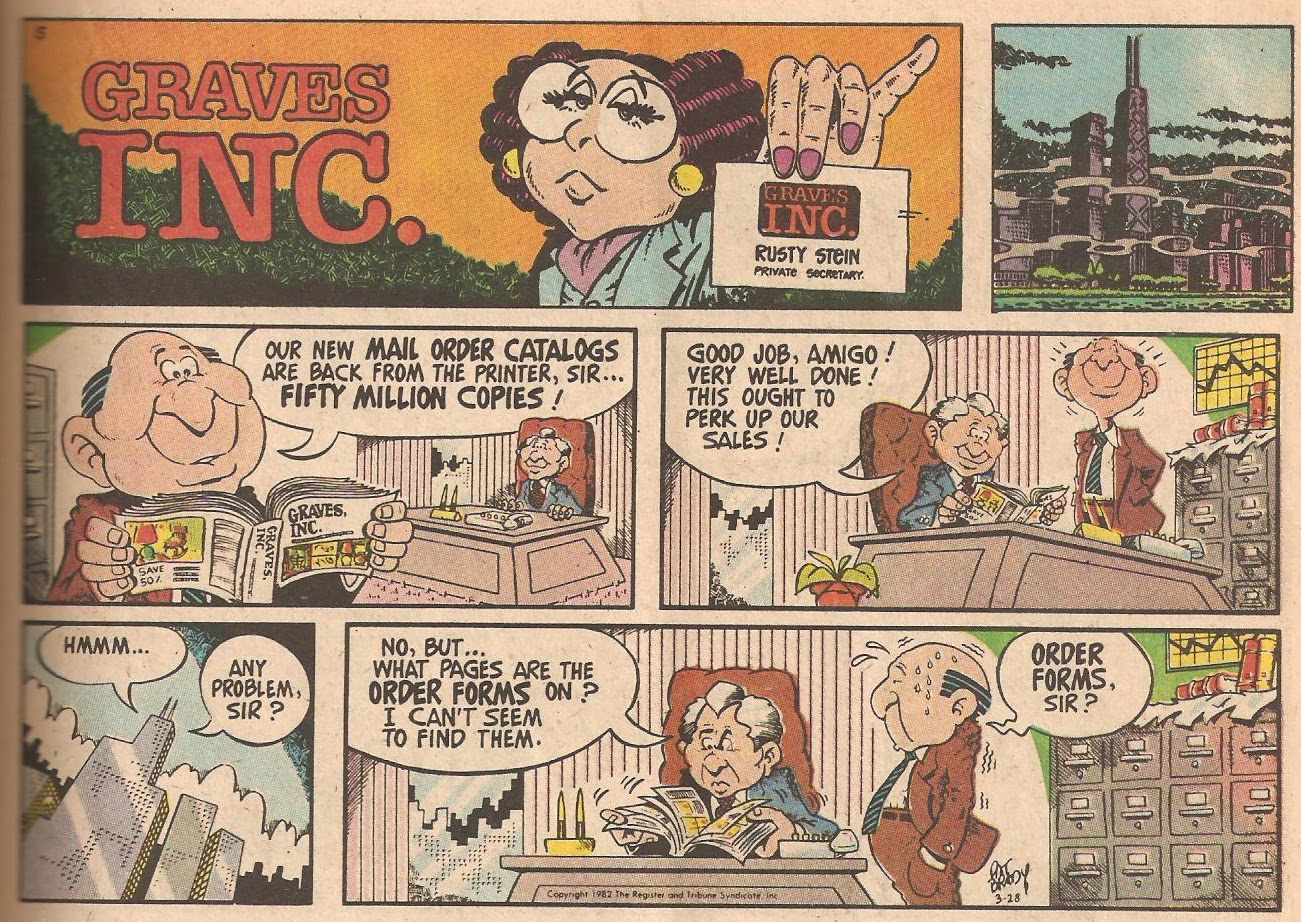 This could also be an apt metaphor for bringing publicity for the Graves Inc. comic itself.  Despite the quality artwork, the rather pessimistic worldview could explain why there's not exactly high demand for such a depressing cut-throat environment.  Indeed, it was shortly replaced by Duffy, which while having the same office environment, had much lighter humour more suitable for the funny pages. 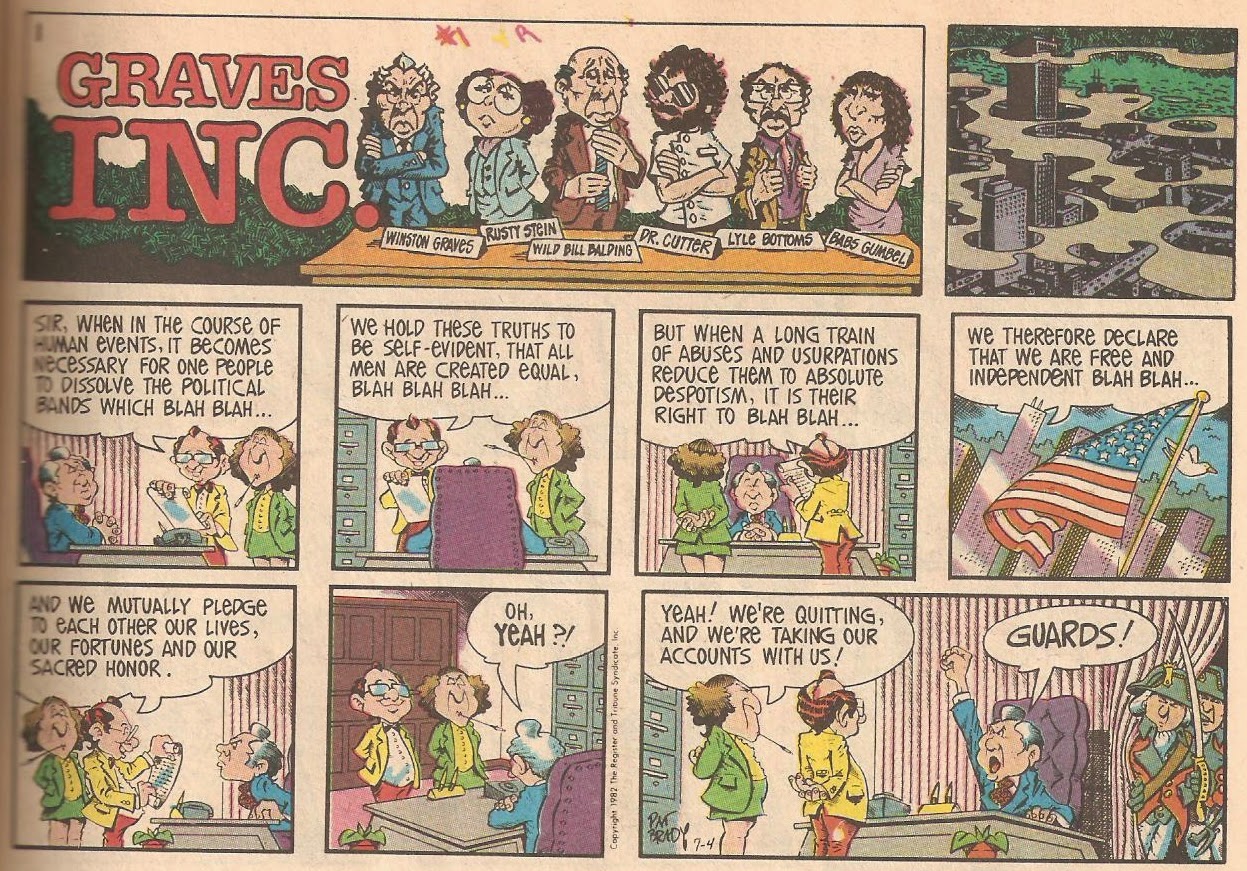 While this isn't the last comic, it seems like an appropriate place to end this whole thing.  The employees are railing against the unfairness of the business, and are threatening to take their clients with them, in deference to Grave's insistence that they not do so.  And it took place on Independence Day of all things.
Posted by DeBT at 6:54 PM