It's been announced that they're thinking of making an unnecessary sequel to the Christmas classic It's a Wonderful Life.  Hollywood is never one to let go of a good idea once it's been proven at the Box Office (despite hating anything new until it makes money) with runaway repeat successes such as Home Alone, Indiana Jones, Die Hard, the Disney straight-to-video Cheapquels and pretty much every horror movie ever made.  This also includes sequels to movies that finished their stories and had no reason to continue, such as Gone With the Wind and A Christmas Story.  I haven't even bothered to even look at these, because these latest additions would just destroy whatever I loved about these classic movies in the first place.  You'd think that given how violently audiences react to seeing their favorite characters blatantly vandalized onscreen, they would  learn from these lessons and start to question their tastes, thus seeking out alternate entertainment elsewhere, but that's never been the case.  Hence why Hollywood keeps seeking out reinventing the same stories over and over again to the point where they've got a checklist for making sure movies hit the same high points down to the minute.  Spunky down-on-their-luck underdog hero?  Check!  Contrived setup for potential conflict?  Check!  MacGuffin to be reintroduced later?  Check!  Love interest?  Check!  Proving the hero's dubious ability?  Check!  Training montage?  Check!  Chase scene?  Check!  Reveal of hero's actual worth?  Check!  Moment of self-doubt?  Check!  Dragging hero out of self-pity?  Check!  Renewed hero's triumphant return?  Check!  Villain's defeat?  Check!  Happy End?  Checkaroonie!

At this point, other than stealing creative properties in other countries and passing them off as their own, having already strip-mined everything worth condensing into easy-to-digest 90 minute plot beats of the above, the only other recourse is to combine popular movies with each other.  Pretty much any movie pitch is something along the lines of "It's Mary Poppins meets Chinatown!" (Who Framed Roger Rabbit) which is basically X meets Y and sometimes Z if the plot is slightly more complicated.  Fortunately (or unfortunately as the case may be) the movie was already ruined as a sequel in 1990 as a comic crossover.  Which leads the question: who would be the most logical pop culture icon to interfere with the main protagonist of It's a Wonderful Life? 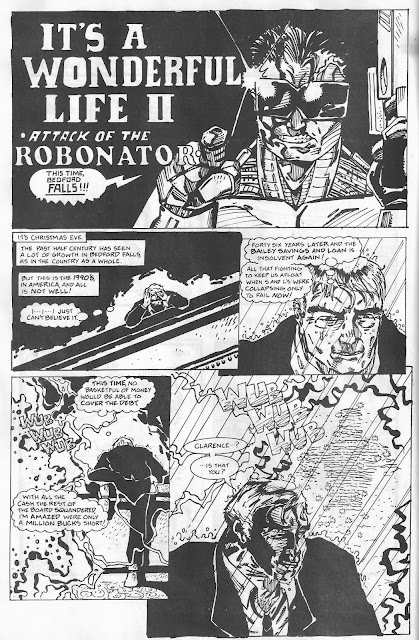 Who else but an Arnold Schwarzenegger pastiche in a Copyright parody combination of Robocop and the Terminator going back in time to prevent horribly awful circumstances from getting worse.  This is already miles ahead of the concept of using Grandma Zuzu as a new Guardian Angel for inspirational advice.  How much worse could things get from that point other than a greasy wet spot on the sidewalk?  If you thought that scenario was bleak, you haven't seen anything yet. 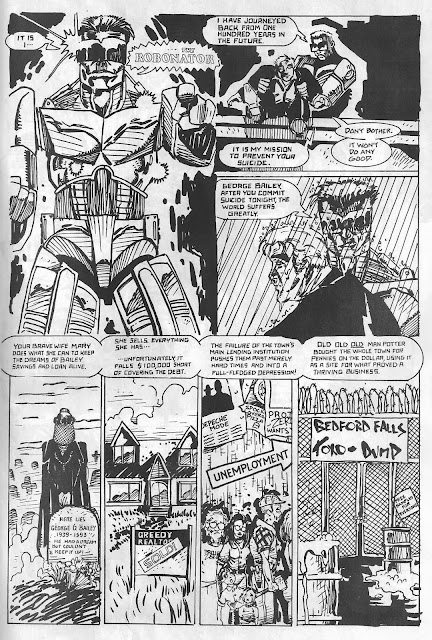 It's fifty years in the future, and the bad guy from the first movie, Old Man Potter is somehow STILL alive to create a drain on the town's finances for his personal gain.  As is typical of Corrupt Corporate Executives, the repercussions for such selfish instant gratification has negative consequences upon the populace that won't affect his hard-won income long after he's dead.  Assuming he's not hiding away in a nuclear-proof bunker, that's pretty much what the monologue is suggesting here. 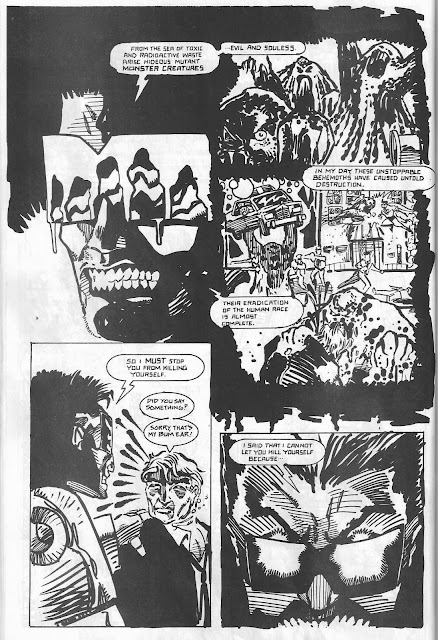 So with this horror movie summary that's been entirely missed due to his deafness, this somehow manages to serve as an inspirational message for George Bailey... 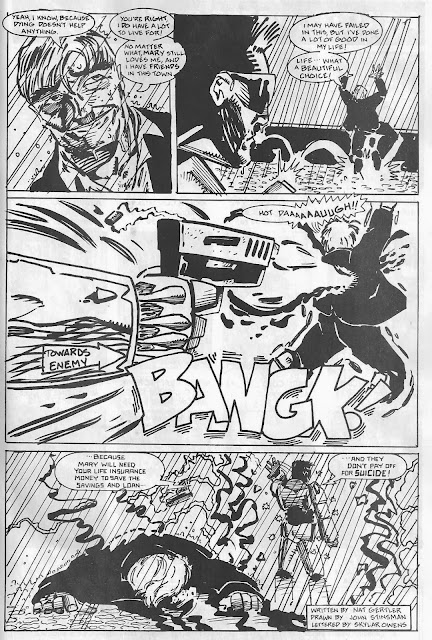 ...except that's not really why the Robonator© came back in time.  He figured that the best way to save the deficient Savings & Loan was not by giving knowledge of helpful financial advice for the future, but making sure the inspirational character died a proper death.  That is unless of course, the insurance company is owned by Old Man Potter who'd go out of his way to make sure the money never reaches the Bailey family, based on the dubious claim that George Bailey was really shot in the back, when the more likely scenario would be that he was tossing a gun on the roof when the pistol overshot his line of sight, fell behind him and misfired, shooting him in the small of the back.  Given how unscrupulous insurance companies are about ever giving out money to their customers, this isn't an implausible outcome.  Leave it to a pessimistic optimist nihilist (i.e., me)  to find the cloudy silver lining in an already depressing cloud.

I guess that kind of message could make it something of a hard sell in Hollywood.  Looks like we won't be getting a live-action version of this comic made.  Bummer.
Posted by DeBT at 11:01 PM