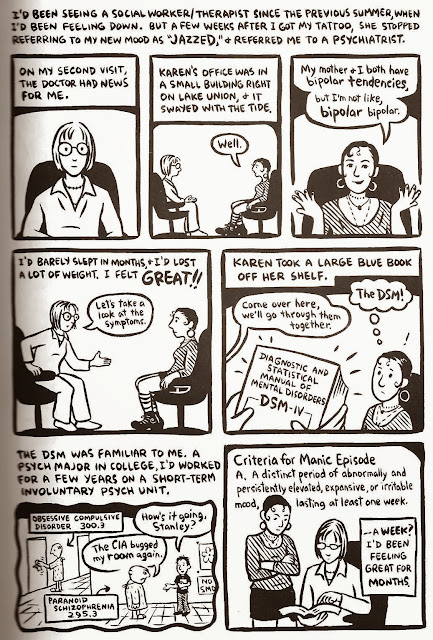 I just recently read the autobiographical comicbook Marbles by Ellen Foreny (not to be confused with the OTHER quasi-biographical comic Marble Season by Gilbert Hernandez), and was impressed with the author's honest portrayal of dealing with her Bipolarism, Especially since it impacted the creative world of art that she lived in. 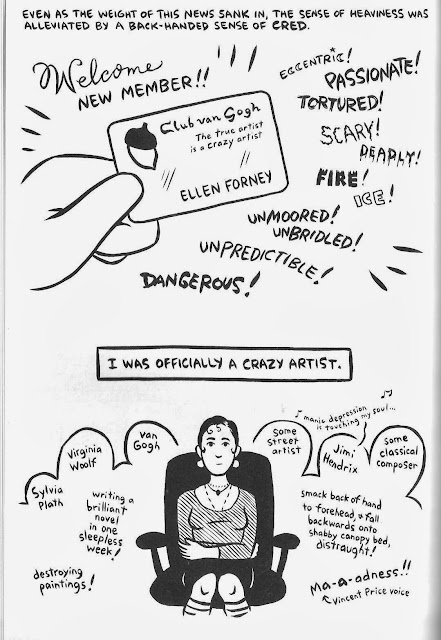 One thing in particular that struck me about Marbles was the inherent fear that taking drugs would reduce her creative streak and leave her a mere shell of her former self. 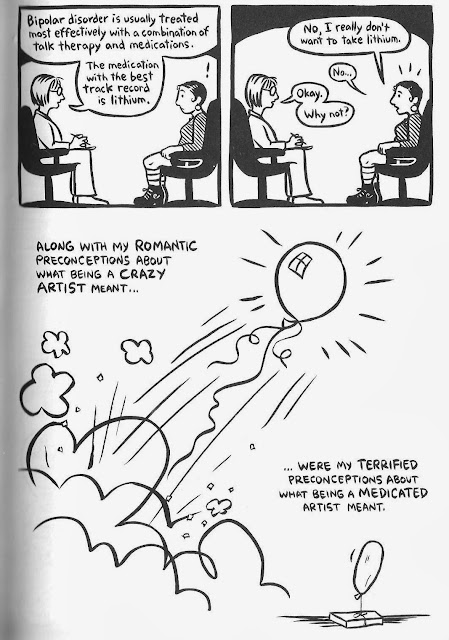 When I was still attending High School, it was suggested that I take some pills in order to cope with the rising level of stress I was having which resulted in inappropriate outbursts and reactions.  One of my calming tools was to repeatedly bang a hardcover textbook against the flat of my head.  This always brought a wave of euphoria to me, and drove home the mistake I made, though it was disturbing to onlookers. 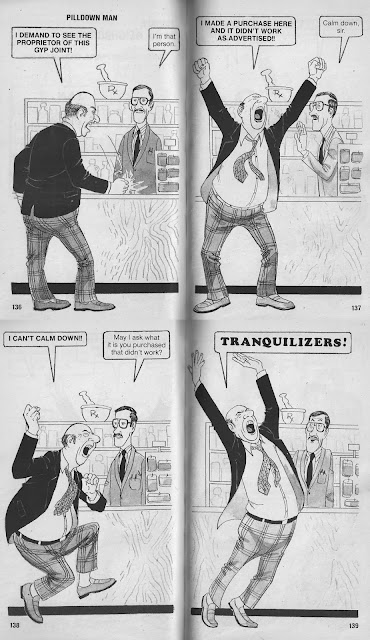 I was never hit by my parents as a kid, but read plenty of literature where children were beaten up to prove a point.  Being raised in a loving household did nothing to dispel the illusion that messages should be reinforced with force, and I often put these self-abusive notions on myself to drive home repeating these mistakes.  It was a simple matter of making use of the relieving tension of pressure to associate the pain of making mistakes with something I could memorize on my body.  I needed to feel something, even as I pushed all other outside sensory influences away. 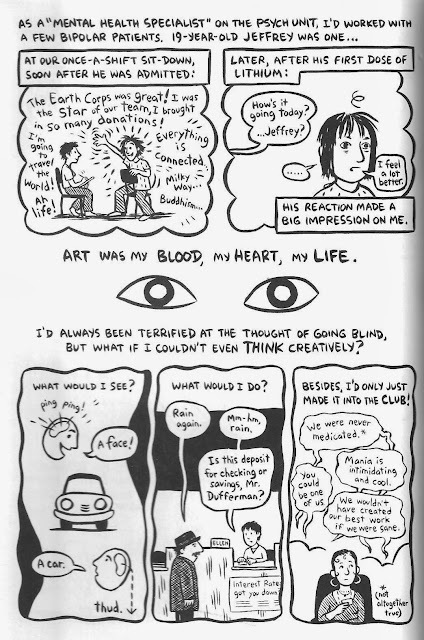 Shortly after, it was remarked that I suddenly showed a drastic reduction in my temperament and mood.  It wasn't until two weeks later when the MOSD Psychologist came over for her biweekly appointment that I mentioned something in private to her, which she took in stride.  At the time, she came over to our house, because I was too anxious to even consider going somewhere else after school.  In my mind, staying after school to do after-school activities just added to the load of homework on my plate.  I didn't want to have to deal with more stuff than I could cope with.  It was also why I was never able to fully enjoy joining the Cub Scouts, because of the group element and games (which I had no understanding of rules) which felt like an added period of school on top of which, I had to wear a restrictive tight uniform which made me uncomfortable.

Indeed, the very first thing I did at in class at the last bell was to dash right out the door in a mad rush towards the bus stop so I could beat the crowd of rowdy teenagers crowding up the stop station.  If I managed to catch the bus, I was guaranteed a safe passage to the metro and a faster ride home with empty seats.  But if I missed it, I had to wait surrounded in a maddening crowd of teenagers pushing each other intentionally and unintentionally both outside and inside the bus.  These repeat incidents were fodder for my personal fear of crowds and people in general.

With my reluctant permission, I allowed my MOSD Psychologist to reveal what I told her in confidence.  I led my parents to the basement where I showed them the stash of pills I'd been palming away during dinnertime.  Like John Nash, I was so determined not to let chemicals interfere with my brain that I willed myself to become calmer in the face of drug dependency.  I didn't want to become overly reliant on something that would either cause meltdowns upon forgetting to take my pills if I somehow woke up late and had to rush out in order to catch the bus.  I wasn't a fan of having to take drugs on a regular basis anyways, due to my discomfort at swallowing them with water.  (I've later found a suitable approach by mixing pills with chewed up food instead, but the prospect of having to follow a rigid routine still remains) 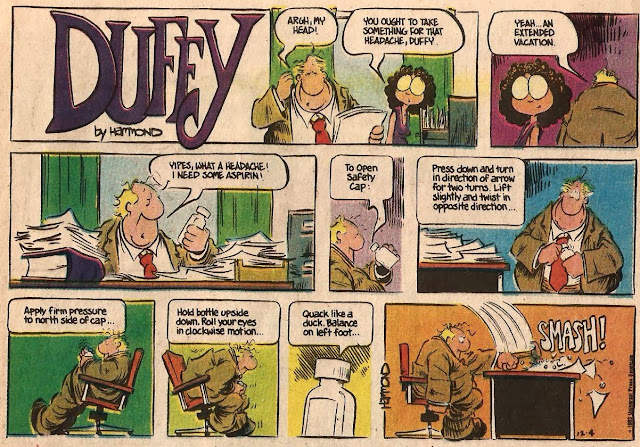 Like Ellen Foreny, I wasn't a fan of taking medication that could potentially reduce the amount of innovative ideas that spewed from my head, usually as a result from being stressed by external stimuli well outside my control.  (Most of my inspiration is borne out of things that frustrate me)  Another thing that concerned me is how I might react if I decide not to take the mood-altering pills anymore.  It's just so easy to let your prescription run out and not have to go through the motions.  One day off becomes two, then a full-blown week.  Soon you're going marathon stretches without having the chemicals you've got running through your body, and revert back into default mode, which is where all this madness started.

Shortly after reading Marbles, I noticed some similarities in book version of Hyperbole & a Half, which had extra chapters not available on the blog, and there were several pages there that led me to believe the possibility that Allie Brosh might be Bipolar herself.  There were the instances of over-inflated self-esteem, and dubious conversations. 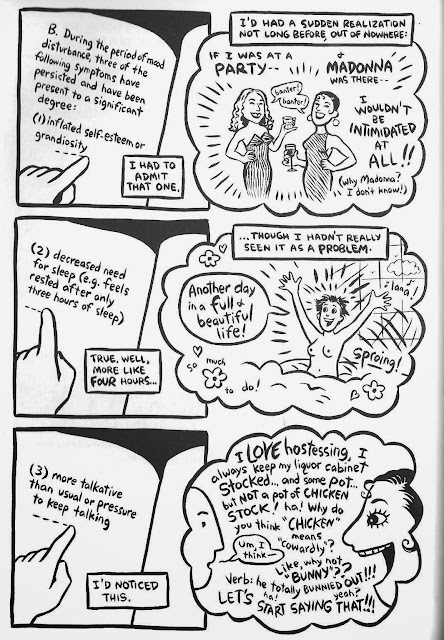 Not to mention her rambling streams of consciousness, and overenthusiastic plan-making in the face of reality, and her memorable bout of deep depression, as well as the unorthodox ways she managed to wriggle her way out of her funks, which were both Maniac highs and lows. 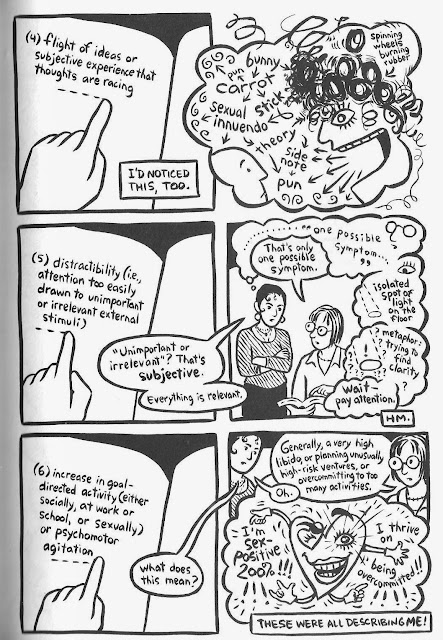 Also, in the book, Allie Brosh mentions how much effort she puts in trying not to say or do anything that would be considered unconventional, and through some arbitrary rule of hers, expects to be admired and praised for not being as outrageous as she could be.  Looking closely, the signs were surely there.

Of course, that opinion had to be washed away when it was mentioned in an interview that she had severe ADHD that impacted her behavior and outlook in life.  Go figure.
Posted by DeBT at 10:03 PM