Three Septembers and a Party 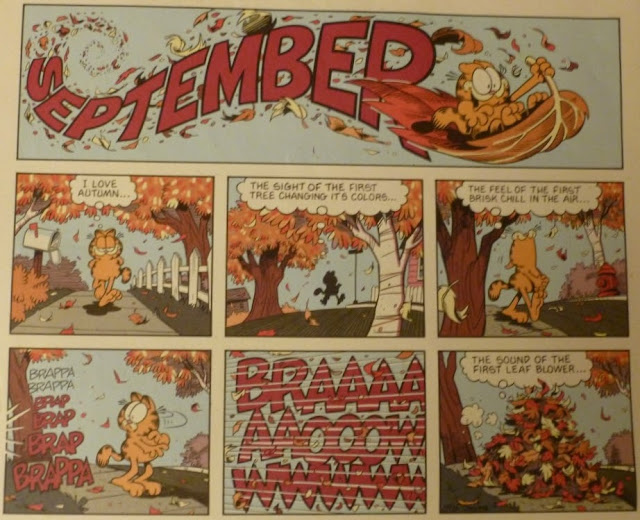 Most other cartoons use the focus of going back to school for the theme of September, but since Garfield is a lazy housecat, he can afford to have differing opinions about the month that isn't restricted to going back to the scholastic grind, and Jon's profession is hardly addressed, so it's even less of an issue.

Incidentally, the Jewish new year, Rosh Hashanah takes place at the beginning of September, which seems somewhat fitting, since the religion is mainly about teaching.  Makes you wonder what other culture's New Years (such as the Chinese year in February) are supposed to signify. 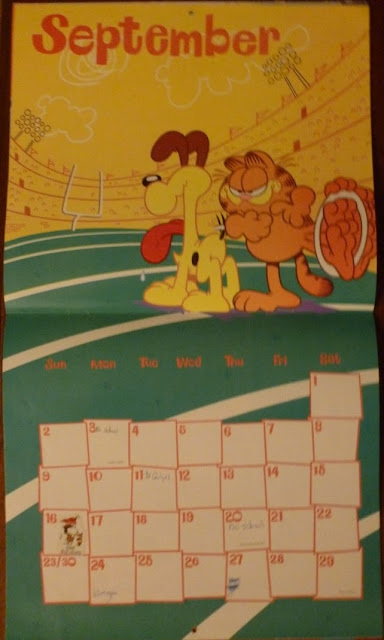 So, other than schoolstuff, there's also Labor Day, continuation of the Football season, um... Grandparent's Day... the Fall Equinox...Yom Kippur... yeah, there's not much about this month outside of school that can be made light of.
While it's been almost two years of sharing my calendars online, I almost didn't start doing this, and the next image will explain why.  It's also a somewhat embarrassing admission I've been reluctant to reveal:


Surprise Party for a Stranger Party
Yes, I taped some stickers from a packet of cereal boxes, confident that I would safely retain the knowledge of the original image behind those figures.  This is pretty much the rationale behind getting rid of any of my childhood favorite books and toys long after I figured I'd outgrown them, and then suddenly had a nostalgic craving to see them again.  This can pretty much explain the packrat mentality of fandom - you never know when you'll want to see a childhood favorite, no matter how stupid it was.

Until I started doing these, I kept wondering in the back of my mind why I hadn't done this before.  Then when I came across this month, I suddenly remembered.  I could've stopped anytime, but having gone as far as I already had, it was too late.  I hoped to find an accompanying smaller picture in a recent Garfield Anniversary book which showcased a few Calendars, but this month's installment was absent.  Possibly there are others who've unintentionally vandalized their precious calendars with various doodles in the margins, which could account for the lack of a cartoon calendar tumblr.  I tried to see if I could peel away the stickers off, but was worried that any attempt to do so would ruin the page, and also possibly damage the whole calendar as well.  If there IS anybody out there who has a copy of the original, please let me know, and I'll post the quality version below.
Posted by DeBT at 1:48 PM