Well, we may not have our jetpacks (no matter how impractical they are as a transportation device), but at least we have our cellphones.  The ubiquitous of cells is quite an accomplishment, considering that portable phones were only available to people who could afford such luxuries. 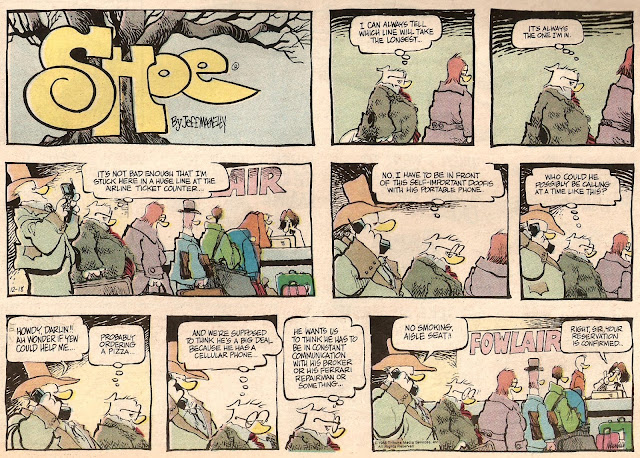 Just recently, my sister updated her regular cellphone for a fancy-schmancy Smartphone.  As is, she's rather pleased with her new toy, even though it'll cost her quite a bit for the phone rate.  She offered me her old model for me, since it was likely she wouldn't be using it for much longer.  It was a sliding model with a Qwerty keyboard hidden in the underside.  Only problem was, it was of a different model than the one whose plan I'm currently on.  Unlike the majority of the population, I don't exactly have a wide range of friends to talk to via a phone, let alone have a network of close connections to communicate with on a regular basis.  As such, my plan is limited to just texting 100 times a month.  I'm told that this would be considered quite conservative for teenagers who would feel positively restrained with that kind of restriction, and go mad, since that's how much they text in an HOUR.  I'm lucky if I text more than twice a WEEK.  So the fact that my plan only costs $5 a month for texting ONLY (no calling, no receiving photos, no internet connection), it's a pretty good bargain.  Sticking it to the Man!  As limited as the functions of my phone is, I'm rather satisfied with the basics, even though sending multiple texts drains the battery extremely quickly, so that if I'm expecting a reply, it'd better be while my phone is still on, and not just recharging. 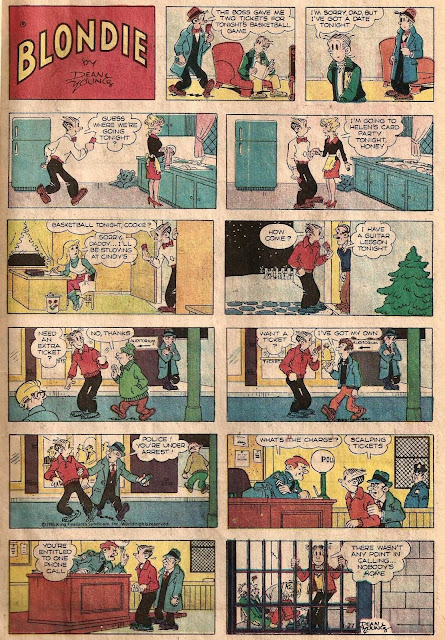 However, my parents haven't been so lucky in finding a landline phone for their house.  This is further complicated by the fact that the model that my parents prefer is one that's no longer in circulation.  Some of the problems they had with finding a new phone was some niggling little details that turned out to be more annoying than helpful.

For starters, the caller ID window gives you the heads-up on who's calling you, and depending on the caller, it's either a close friend, a business associate or a telephone solicitor.  Depending on the caller, you can choose to pick up the receiver right away, or let the machine deal with it.  The problem only comes when wanting to look up the list of people who've called.  On their old phone, you get not just the name of the person who called, but also their phone number, the time and date they called.  Four pieces of information available on a single screen.  Easy-peasy, just plain old queasy.  Only, nothing can ever stay simple for very long, can it?  The phone companies obviously thought these designs were not to their customer's satisfaction, and so changed them to something more their liking.  So, for the new phone, if you wanted to check your caller inventory, you no longer were required to push a single button.  After pressing the Call ID button, you'd be routed to a menu, asking you what options you'd like: the time, the date, the number or the name of the caller?  After choosing which of these hoops you wanted, you'd finally get the number, but the name wouldn't be available on the same screen.  For THAT, you'd have to go back to the menu, and go through the whole process again.  After which, you'd probably forget what you were looking for in the first place.  This 4-step program would drive anybody to a 12-step program.

I know that planned obsolence is needed for companies to replace their wares for potential customers, but is there some rule that says the next update has to be technologically superior and less effcient and user-friendly?  Microsoft Word, Vista and Windows 8 come to mind.

Another annoying feature is that the text can be hard to read off the screen.  This is not just regarding the font size and digital numbers, but also the intensity and boldness of the readout.  The glow of tiny font is easier to see on one screen than off another.  Two guesses which version is more practical.  Since my parents aren't avid texters, and don't rely on seeing touch-tone digits for making calls, this kind of option is useless to them. In another feature, the keyboards glow in the dark, making it easier to see the numbers, while the screen showing relevant information, stays muted.  To make matters more frustrating, the text disappears if it's not seen at a proper angle.  If you look at the screen from any view other than straight head-on, the information will vanish from your peripheral vision.  I can relate since I find reading comics with shiny glossy paper difficult to read because of the angle reflecting light off the page, making the glare annoyingly distracting.  We should be able to manipulate our tools, not have our tools manipulate us to their needs. 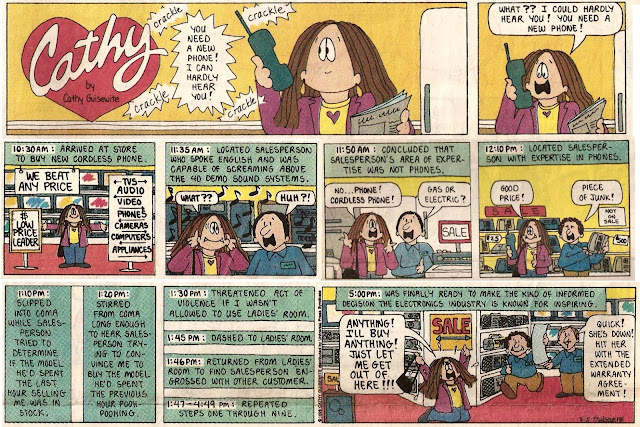 The really infuriating thing is that the could only find out about these problems AFTER they bought the phones and checked them out at home.  The whole process would've gone much smoother if they could've tested them out at the store, much like test driving a car.  The fact that I can't check any DVDs for whether the subtitles disappear when put on fast-forward has been a large deterrent in making impulse purchases of electronics.  Bringing my own DVD movies to the store is no help if the display samples don't have their remotes on hand to play around with.

Just as infuriating is that my mother has trouble finding her regular cellphone when she's not paying attention.  When she last lost it, she was scrambling all over the house trying to find the tiny ringtone from her missing cell by dialing the number, and listening for that barely audible tone.  Fun fact - the most common place lost household items are found are in the refrigerator.  (Not that that's where the phone was, but just wanted to throw that in there)  After that, she set the volume of her ringtone on MAX so wouldn't lose it next time, with the intention of setting the phone on vibrate in present company.  Of course, this doesn't always go exactly as planned, which can result in rather embarrassing distracting music playing during inopportune moments. 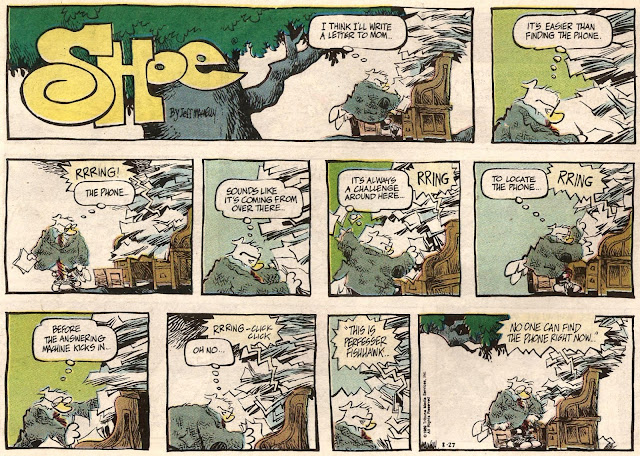