The Hymn of the Embattled Republic

The verdict of the George Zimmerman's shooting of Trayvon Martin has caused further polar divisions between the Black and White communities in the States.  Most particularly in how despite the overwhelming evidence against him, the outcome would've been completely one-sided if the offending parties had their skin colours reversed.  The results have created a national divide between people who believe Zimmerman was cast in a negative light and those who are convinced he was outright guilty.  As was mentioned once by somebody, the Confederation Civil War simply never really ended.  There were still people in the South who continue to believe that Blacks never should've stopped being slaves.

I'm not culturally entrenched into this way of thought, and digging deeper into the comments of essays about this topic just reveals uncomfortable inner turmoil that I find myself despising myself for even thinking.  Rather than contribute a weak opinion that would fall short of identifying with a culture clash I'm still painfully unaware or accustomed to, here's an article from MAD Magazine #343 in 1996.  While MAD showed signs of declining quality in its later years, there were signs of biting satire now and then.  This revised stanza of the soundtrack from Inherit the Wind is still relevant almost twenty years later.  No further commentary is necessary. 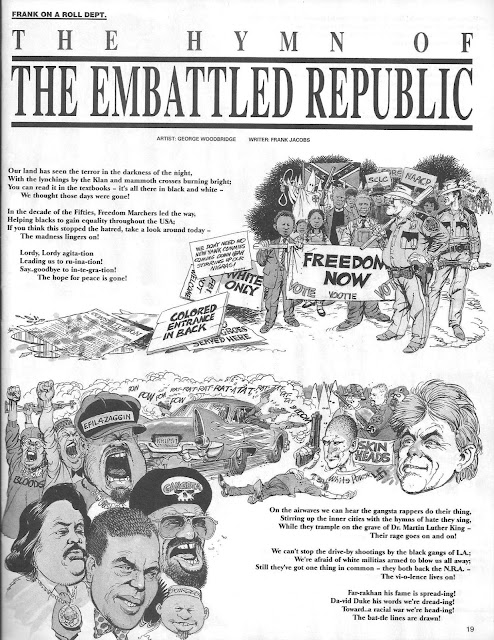 Our land has seen the terror in the darkness of the night,
With the lynchings by the Klan and mammoth crosses burning bright;
You can read it in the textbooks - it's all there in black and white -
We thought those days were gone!

In the decade of the Fifties, Freedome Marchers led the way,
Helping blacks to gain equality throughout the USA;
If you think this stopped the hatred, take a look around today -
The madness lingers on!

Lordy, Lordy agita-tion
Leading us to ru-ina-tion!
Say... good bye to in-te-gration!
The hope for peace is gone!


On the airwaves we can hear the gangsta rappers do their thing,
Stirring up the inner cities with the hymns of hate they sing,
While they trample on the grave of Dr. Martin Luther King -
Their rage goes on and on!

We can't stop the drive-by shootings by the black gangs of L.A.;
We're afraid of white militias armed to blow us all away;
Still they've got one thing in common - they both back the N.R.A. -
The vi-o-lence lives on! 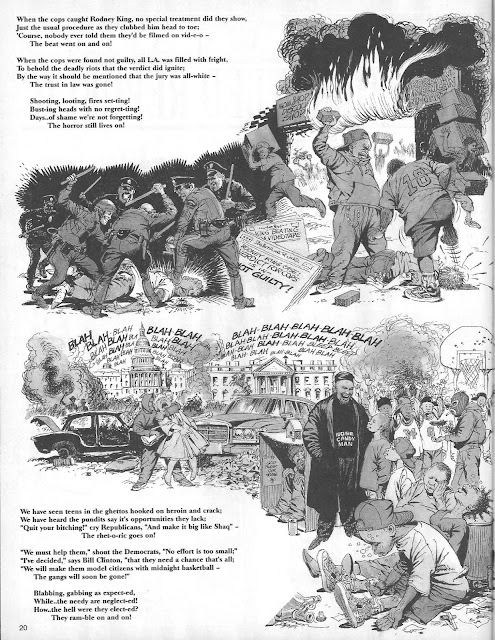 When the cops caught Rodney King, no special treatment did they show,
Just the usual procedure as they clubbed him head to toe;
'Course, nobody ever told them they'd be filmed on vid-e-o -
The beat went on and on!

When the cops were found not guilty, all L.A. was filled with fright,
To behild the deadly riots that the verdict did ignite;
By the way it should be mentioned that the jury was all-white -
The trust in law was gone!

Shooting, looting, fires set-ting!
Bust-ing heads with no regret-ting!
Days... of shame we're not forgetting!
The horror still lives on!

We have seen teens in the ghettos hooked on heroin and crack;
We have heard the pundits say it's opportunities they lack;
"Quit your bitching!" cry Republicans, "And make it big like Shaq" -
The rhet-o-ric goes on!

"We must help them," shout the Democrats, "No effort is too small;"
"I've decided," says Bill Clinton, "that they need a chance that's all;
"We will make them model citizens with midnight basketball -
The gangs will soon be gone!"

Blabbing, gabbing as expected,
While... the needy are neglected!
How... the hell were they elected?
They ramble on and on! 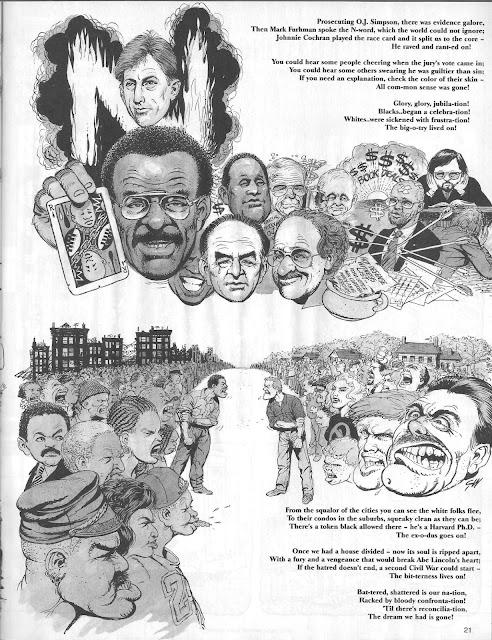 Prosecuting O.J. Simpson, there was evidence galore,
Then Mark Furhman spoke the N-word, which the world could not ignore;
Johnnie Cochran played the race card and it split us to the core -
He raved and rant-ed on!

From the squalor of the cities you can see the white folks flee,
To their condos in the suburbs, squeaky clean as they can be;
There's a token black allowed there - he's a Harvard Ph.D. -
The ex-o-dus goes on!

Once we had a house divided - now its soul is ripped apart,
With a fury and a vengeance that would break Abe Lincoln's heart;
If the hatred doesn't end, a second Civil War could start -
The bit-terness lives on!

Bat-tered, shattered is ou na-tion,
Racked by bloody confronta-tion!
'Til there's reconcilia-tion,
The dream we had is gone!
Posted by DeBT at 4:01 PM