The general consensus and resistance to enjoying children's literature stems from the bias that anything aimed at young readers must be mentally inferior to be comprehensible for young minds.  However, while it's recommended to keep things simplistic in order to make the story appealing, that doesn't immediately translate into dumbing down the work.  Rather, it means displaying a different mindset than what would normally be appropriate for older people.  Make your story too confusing, and you risk losing your audience's interest.  Go too far in the other direction, and you wind up insulting your audience's intellect.
It's a delicate balance between the two, and some writers aren't fortunate enough to cross that divide with a story that'll be enjoyed by all ages.  I'm more appreciative of those writers who go off the beaten track and create something that'll be enjoyed multiple times and won't suffer from the passage of time.

With that in mind, here's a summary of three children's books I recently read:

Matt Phelan's debut book The Storm in the Barn played on a fantasy explanation for the droughts during the depression.  His second book is more biographical, but to me, it's much more interesting, simply because it's true.

Jules Verne made one of his many marks on the literary world with his tale of Phileas Fogg's legendary journey around the turn of the industrial revolution.  Before mass public transit would make travelling around the world in under a day seem as easy as crossing the street, there were other real-life individuals at the end of the 19th Century who took up on the fictional journey and took it upon themselves to partake their own version of the challenge.

The first person, Thomas Stevens took up the task of travelling around the world - on a single vehicle.  This was so he could help do some promotional advertising for the bicycle since it was highly preferable to his daily job of toiling in the mines.  With this newfound activity, he could get a chance to enjoy the fresh air and sunshine, and impress the passerbys who would be seeing this innovative mode of transport for the first time.

But this wasn't your typical two-wheeler kind of bike, this was the old-school tricycle with the meter-long front spoke that's reminiscent of antiquated photos.  This was back when bicycles were called Velocipedes, as immortalized in a certain Kate Beaton comic, where anything technologically innovative was looked upon with suspicion.  The bicycle is basically a modified function of the wheel and axle.  It's the most openly revealed engine out there.

You know those old two-ply boards that are endlessly seen advertising signs such as "Eat at Joe's"?  I saw a modernized version of that when I saw somebody downtown who was rollerblading with an ad on his back.  I can't remember what was being advertised, but it certainly seems innovative, even as I was more impressed by the innovativeness of subliminal media for usage of short attention span tactics.  But I'm digressing.

The second person, Nellie Bly was a reporter who wanted to see if it were personally possible to travel around the world via the same limitations as outlined in Jules Verne's story.  However, there were large hindrances against such a ambitious undertaking.  There wasn't enough funding / readers wouldn't be interested / it was too dangerous.  But the main reason for the resistance was that Nellie Bly was a woman. And not just any woman.  She was a truly investigative reporter.  She simulated madness so she could gain access and report on the harsh working conditions of an insane asylum.

A year after she proposed her offer, she finally got permission from her publishers to undertake the task in question.  Taking the barest minimum for travelling, consisting of an overcoat and a single travelling bag, she set off on her reportive journey.  She was less impressed with sightseeing and more on reaching her destination.  Despite her grumblings of making unnecessary detours, she still made time to interview Jules Verne himself in person.  Her articles garnered the attention of girls worldwide who began emulating her by wearing miniature versions of her trademark hat and overcoat.  Attention only increased when a rival female reporter from another newspaper claimed to accomplish the same deed in less time - in the opposite direction, resulting in a strange kind of race between two women who never see each other.

The last story focuses on Joshua Slocum who took upon the task to go around the world - the hard way. While the other two had the benefit of making their trips via land and had brief intermissions on boat, Slocum decided to make the pilgrimage entirely by boat.  And considering the majority of the world is made up of water, that's a major handicap indeed.  Even more so considering he went upon the entire voyage on a single boat stocked with minimal supplies and reading material, only refueling on supplies when he reached land. Also, unlike the other two, he didn't have a self-imposed deadline to worry about, and was free to sail at his leisure.

Moving on from these short biographies of lesser-known figures, the next book touches on a personal note rather close to me.  The inspirational story that inspired my mother to do some early intervention in order to teach me how to read and talk:

Anne Sullivan and the Trials of Helen Keller

Hellen Keller's infamous upbringing made immortal in The Miracle Worker is slightly retold in the first third of the book, as well as an emotional rendering of the water scene where it all suddenly begins to "click" together for Helen.  In particular, some of the most interesting visuals come from Helen's interpretation of how she perceives the world around her, mostly in the form of a blank self interacting with objects she has little comprehension or understanding of. 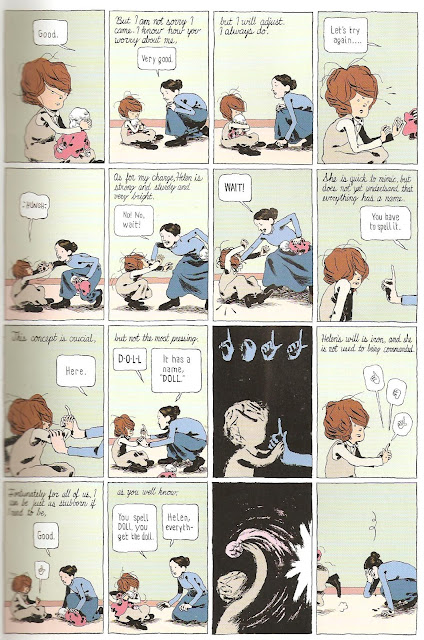 But this book focuses half of its attention on Helen's mentor Anne Sullivan who deserves just as much praise as Helen does.  And the things Sullivan put up with growing up were completely unknown to me, and should be a real eye-opener to understanding just how she could manage to be so tough against Helen's stubbornness. The remaining 2/3rds focus on their relationship as they continue their lessons from the Helen household and beyond. 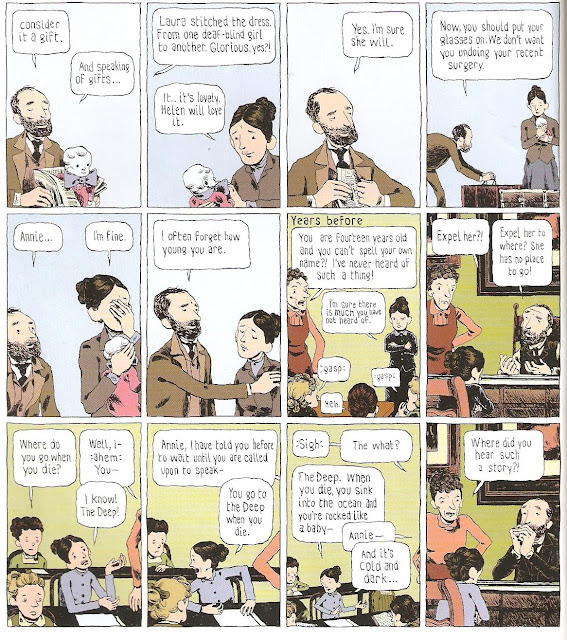 Even as Anne Sullivan has managed to teach Helen the basics, she's still confronted with the insurmountable obstacles such as Helen's parents who are still woefully ignorant about the amount of intensive teaching that Helen requires.  Their perception is that now that Helen's learned what a few words mean, she should be fine by now.  It doesn't help that Anne's mannerisms plays at odds with the South's perceptions of how women should act. 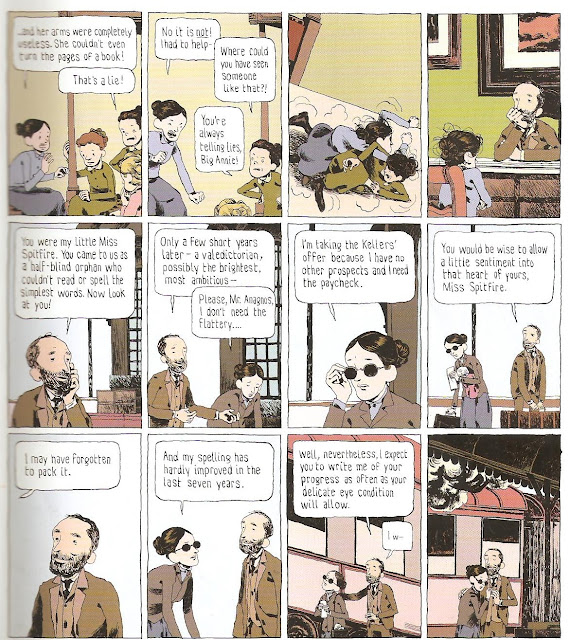 Joseph Lambert's drawings remind me very much of the artwork from Ordinary Victories who tended to look like they were claymation figures.  Of all the Center for Cartoon Studies books done so far, this is the most impressive title to date.

Hilda and the Midnight Giant

Miyazaki has high status for being the Japanese Disney, but despite his sterling reputation, his movies leave me somewhat cold.  I've never quite felt the sense of accomplishment and wonder that his characters are supposed to convey.  For a long time, I was wondering if there was something I was missing, like with Eisner who was highly regarded in artist's circles, but whose storytelling mechanics I found difficult to appreciate. The craft was there, but the way it was assembled together didn't impress me.

Likewise, I could never quite get into Amulet because the character interaction between the characters, for all their fantastic artwork, felt somewhat... dull.  As if all their human interactions were left simplified in order not to offend any finer sensibilities.  However, there's none of that sickening sentimentality to be found in the pages of Hilda.  I know this sounds like I'm advocating regular shouting matches between members of the family on a dysfunctional level, but this could not be further from the truth.  What I want is authenticity between people, where dialogue sounds natural, not forced or acting out of a play.  Unless that play is improv theater, which due to some surprising developments, can happen occasionally, and is still enjoyable upon a reread, even as you already know how it's all going to play out.

So I was delighted when I read Hilda by Luke Pearson which has obvious Miyazaki influences, but goes above and beyond the usual fantasy setup.  Unlike other worlds where the parents are generally disbelieving of their children's spouting of fantastic creatures they've seen, the mother is aware of the amazing creatures that populace the province.  It's among the cheapest cliches along with the schoolchild getting bullied in order to foster audience identification.
However, this is thrown slightly out the window in the presence of the titular giant who in the midst of these tiny people shows up briefly at night, and vanishes abruptly with hardly any clearing to hide behind.  In the presence of tiny invisible people and flying cat faces migrating to the North, it's this little oddity her child proclaims that she finds unbelievable.

Mostly, the giant plays a minor part in the book.  The main focus is on the teenies whose hostility towards the family is really a matter of bureaucracy.  The teenies never really had much of a problem with anybody living on their land.  It just happened that the recently elected Prime Minister promised to drive away any settlers in order to get the votes.  It's purely political, and Hilda has to wade through nonsensical higher branches of authority in order to get any peace in her home.  I won't spoil how it all turns out, but the ending with the giant fits appropriately well with the overall theme of the story.