Recently, I've been enjoying a recent crime-time drama, Motive about a TV show that has shades of Columbo in it. After the finale of Special-OPs negotiation team Flashpoint, it's gratifying to see another Canadian series that plays on the traditional cop show formula.  Each episode starts off with brief synopsis of the murderer and the DOA, leaving no doubt of who committed the crime.  The only difference is that after the two main players are introduced as the Killer and the Victim, we don't get to see the actual crime committed, but only reenacted through flashbacks of what led up to that point.  Once the lead detectives go through the procedures of how the victim was killed and start zeroing in on the correct suspect do we find out WHY the victim was murdered in the first place.  It's nothing terrible groundbreaking, but still somewhat pleasant to watch.


There were two details that jumped out at me in particular for last week's Motive episode, "Against All Odds".  The first was the grocery store clerk putting away cartons of milk. 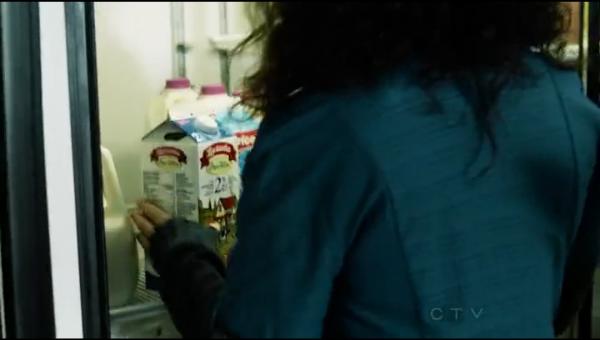 The logo was Lactancia, which were the exact type that's available at stores here, and also the same brand bought at home.  This would stink of product placement, but only if you received that particular milk in your hometown.  Often, I'd see commercials for cereals that weren't available, very much like the infamous Raymond Brigg's Snowman commercial of IRN-BRU.  Fancy-looking, but you'd have to import it in order to sample it.

The second noticeable detail was the address for one of the suspects near the end. 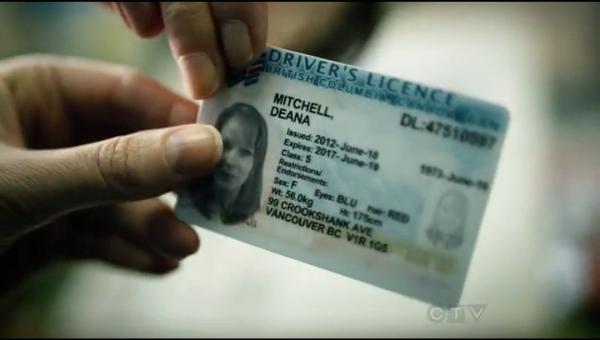 That little detail might be surprising if you're expecting the location to be in America, and finding out that other locations worldwide have a similar makeup.  Despite its familiar American setup and the friendly snarky banter between the two lead detectives, the whole series takes place in Vancouver BC.


This is quite different from when allusions to Canada were purposely left out in order to expand our market, because audiences wouldn't be able to identify with TV characters if they weren't American.  (The book Canada for Dummies exemplifies this by explaining that Americans believe that deep down, EVERYONE wants to be American, and are surprised to discover not everyone feels the same way)
Fortunately, times have changed, and allusions to exotic Canadian landmarks and themes have managed to sneak their way in, from subtle Maple Leaf signs on officer's uniforms to the Space Needle to Tim Horton's coffee shops.


Degrassi Junior High, Degrassi High, The Odyssey, and The Raccoons were some of my favorite shows growing up, simply because they were unlike anything else on TV at the time.  If there's a reason why Canadian media tends to be more oddball, it's not just because of the climate (though that's certainly a contributing factor), it's also because we're faced with stiff competition from our more popular cousins down south.  Canadians have to work twice as hard as our American rivals to produce anything that'll be noticed.  That's probably why so much of our homegrown media can at times be quite innovative and weird compared to the competition.  To get an idea of what it sometimes feels like, the story-within-a-story TV show A Sky of Heads from Concrete were some of my favorite stories of the comic's run. 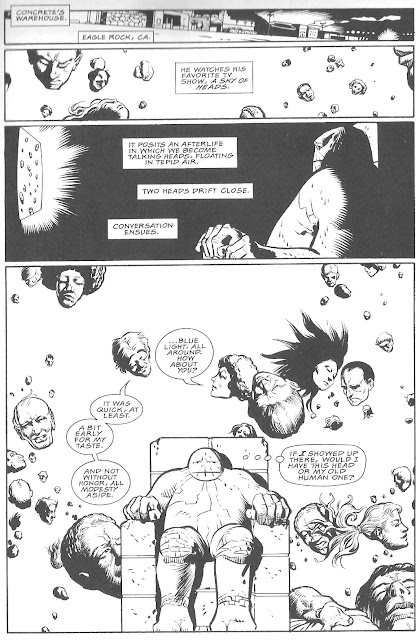 And yet, while we seem to have made great inroads with our Television shows, we're still struggling with the movie industry.  With exceptions such as Bon Cop Bad Cop, C.R.A.Z.Y., Men With Brooms and Seducing Doctor Lewis, the majority of French Canadian-themed movies tend to be serious and clinically depressing to the point of making Russian novels look like bastions of positivity in comparison.  A particularly cynical director's cut of Pig's Law had an unwanted baby be plowed under by a harvest combiner.  You'd think a climate that fosters good humour would want to produce material that'd be ambassadors of same. 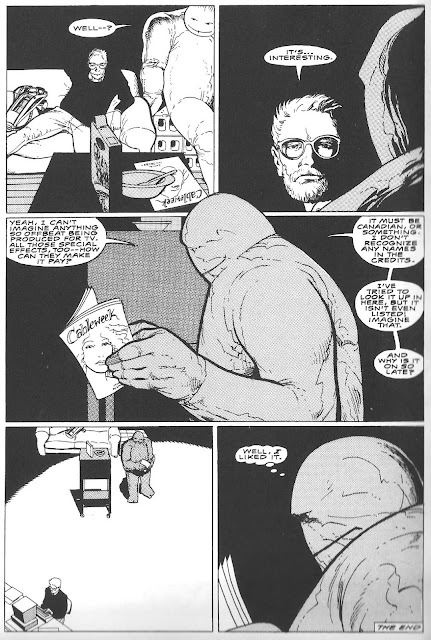 In closing there was one final detail I particularly enjoyed.  When the lead detective browsed the convenience store, she picked up a box of Sugar Bombs, as in Calvin's Chocolate Frosted Sugar Bombs.  Detective Angie Flynn even goes off in a Columbo-esque non-sequitur saying that these cereals were full of sugar and were here favorite things to eat as a kid. 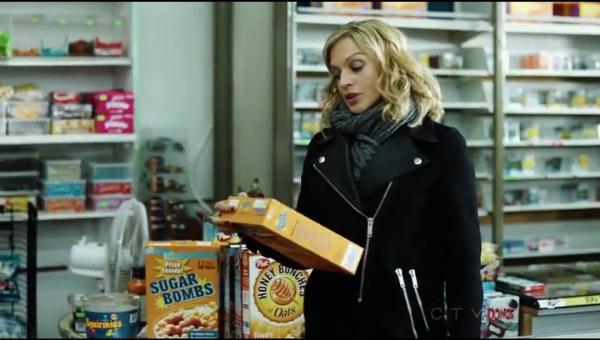