In the olden times of translating comics, foreign sound effects had to be whited out and then the relevant text painstakingly handwritten to ensure that the replaced font would match the artist's handwriting.  Compared to  that laborious practice, passing the torch of letterers to computer programs can seem like a quick fix.  Programs like these are a boon for people with excellent drawing, but lousy lettering.  (Nothing can be done to fix lousy writing though - computers haven't learned how to become influential editors yet)  There are notable detractors who'll lament the cold usage of static font that displays none of the warmth of a finely honed penmanship, even as modern writing has relied more on typewritten texts than lead on paper.  Some programs have gotten so good that they're able to blur the line between human and machine perfectly.  However, this is still a long way off, since defects do occasionally pop up.

One such occurrence is in Papercutz's Smurfs line where the HEY LOOK! font were a tribute to Harvey Kurtzman's comic title.  Upon first glance, the sound effects look equally innovative.  But until the latest book, The Baby Smurf, I hadn't quite noticed how much the sound effects were basically copied down to the shaky letters.

In the relevant scene, Jokey Smurf gives the newborn baby a token of appreciation in the form of an explosive practical joke that he hands around to everyone, friend and foe alike.  This is an early life lesson that should be encountered the earlier the better, and once the baby learns of this cruel fact of life, the better off he'll be.
Later, when everybody in the village learns of news that due to a mix-up, the baby Smurf was dropped off at the wrong address.  (Which makes one wonder who ELSE would Baby Smurf belong to?  It's not like there's plenty of other Smurf villages out there for Gargamel to terrorize - just this specific one) After some interference from Grouchy Smurf, in a show of Moe overload, suddenly finds himself unwanting to relinquish a cute new arrival that emulates him in miniature, kidnaps the baby in an effort to keep him all to himself, until he finds out that life as a fugitive in care of a young child is beyond his capabilities, and is eventually forced to return the baby to ensure the little tyke's survival.

The celebratory party that takes place after is something of a much grimmer affair, lacking the usual  spontaneity and happiness that one usually associates with Smurfs, and even Jokey Smurf's attempts a humour fall flat. 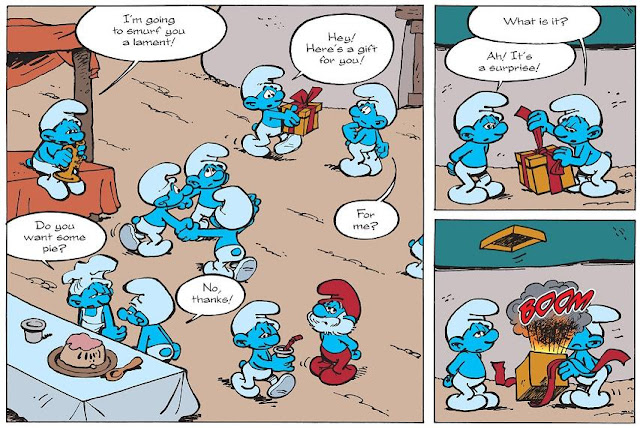 Upon first sight, there would seem to be no difference in terms of mood, but I noticed that the sound effect consistently remained the same size throughout.  For comparison's sake, here's the original scene in all its violent glory. 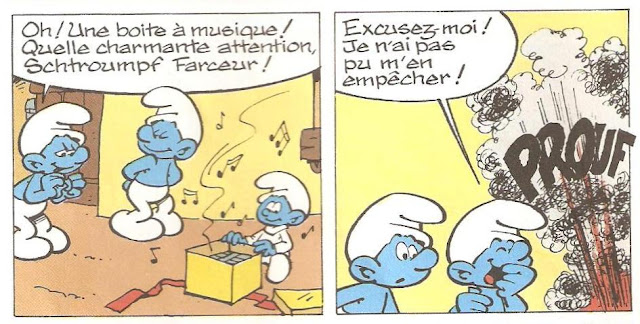 As you'll see, not much has changed.  But what's different is the follow-up scene where everybody is demoralized. 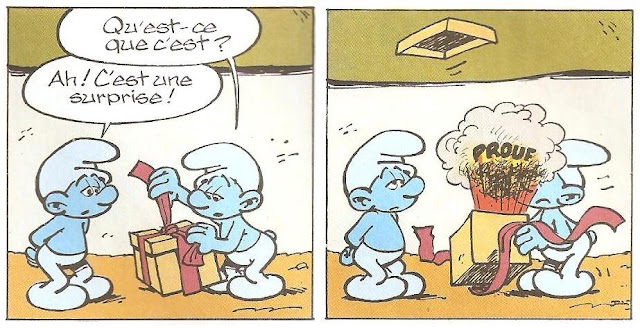 As Chuck Jones mentioned in his biography, Chuck Reducks, a lot of humour comes from defied expectations of perceived outcomes.  In that Golden Age of Warner Bros. cartoons, sound effect editors felt that they should have maximum volume so the audience could hear it all the way to the back of the theater.
A particular sound editor, Robert North was in charge of the various sound effects that would take place in a typical cartoon.  From the screech of the Coyote's heels on asphalt to the whistle as he falls through the ground to the deafening CRASH on the ground.  Only, this editor had accidentally tweaked the dial in the opposite direction for the CRASH sound effect so the only thing that was heard was a barely audible "plop".


That was the only time I ever heard Bob laugh, and he laughed so hard he fell out of his chair.  But being a professional sound effects man, he recovered himself, jumped up, and announced, "We've got to fix that."

Jones:"Bob, if you touch that, you're a dead fixer, and you will never mix another picture."
Bob: But we've got to get it right.Jones: What, Bob, is the purpose of an animated cartoon?Bob: To [make people] laugh.Jones: In all the years we've worked together, you've never laughed before.  Why did you laugh?Bob: It must have been very funny.Jones: And you want to take it out, don't you?Bob: (Unconvinced) Okay... but I may get hell from Jack Warner.

The sound effect stayed.  It was a happy accident, but I had to be ready to recognize it.  It may never have happened again.

There's a relevant quote that I can't quite find about an enthusiastic comic fan wanting to do a story with EXTREEEEEEME 90's Liefeld moments of constantly shifting from one gun-toting tough-guy scene to another.  (I think the Joker was in it)  There were dozens of bad guys with gunfire coming from all directions.  Then there were bombs going off everywhere.  The guy listening to this mostly pointless story of one-upmanship made polite inquiries to let the events breath on their own, until he countered with, "And then there's a nuclear explosion."  At that point, the fanboy's enthusiasm evaporated with a resounding "Oh."

"You see?  You've kept the level of action so high that when it comes to actually showing a real explosion, it gets lost in the shuffle."

There's a time for increasing suspense and dramatic character interactions turned up to eleven, and there's a time to slow down and let the characters catch a breath.  Very few comic creators out there are able to fully pull this seemingly simple trick off.  It should be up to the letterer to ensure that those intentions remain during the transition.