(Disclaimer: this was originally going to be a License Request post appealing for a Manga series I just recently marathoned, but only later found out it'd already been licensed by Viz a month ago.  Still, my arguments in favor of it still stand.)

I didn't hold out much hope for this, since it started out with a pretty predictable formula of an optimistic rowdy youth hiding a great power, with the ever-prevalent theme of friendship being the most important value.  That, and it was serialized in Shonen Sunday, which is the weak sister to Shonen Jump's Manga with their episodic stories.  Not to mention that the surest way to motivate anyone was to threaten a cute little girl into a horrific situation.
However, once I got past the initially silly premise, I found myself drawn into the world of magic and humour.  (The surest way to win me over is by seamlessly weaving jokes into the narrative) The story revolves around Aladdin and Alibaba - two names that'll sound familiar to anyone well acquainted with fairy tales.  But this isn't the Disneyfied Aladdin and the Prince of Thieves that you'd be more familiar with.  Here, Aladdin is a plucky young boy with a magical flute that holds a Djinn that's all muscle and no head.
Alibaba (a run-on name if there was ever one) is a jack-of-all-trades shifting from one demographic to another, trying to elevate himself to a higher position from his lowly state.  Later on, we also see a Jafar (or more specifically, Ja'far), but he's so far removed from the stereotypical Evil Chancelor figure that he's actually closer to the historical Ja'far who was the only authority figure in charge keeping his kingdom afloat and falling into ruin.  Any arguments he brings up are purely logical in themselves, and are more in protest to his lord's more outlandish proclamations
But the title is slightly misleading - it doesn't really focus as much on dungeon exploration as you might think.  The first raid ends in the 2nd volume, and they don't get the chance to explore a new dungeon until the 10th volume.  That discrepancy gap would be annoying for Zelda enthusiasts hoping to get the chance to explore a new unexplored cavern, but it never feels like filler.  In between expeditions, the team are split up, wander about with their prospective adventures, meet up again, form new alliances, meet new enemies and set the stage for the next adventure.

It feels very like an ongoing RPG with ever-escalating rising challenges.  No sooner do our heroes get past one threat than a new one appears.  Normally, when you read such videogame adaptions, there's the sense that you're not fully invested in the storyline unless you're already familiar with the gameplay mechanics of the source, and some of the in-jokes can be lost to non-gamers or people who haven't bothered getting the console for that game.  But there's no such barrier here.  Each new magical element comes with their own rules and is introduced with minimal exposition and builds up on what's been shown before.  The team will recuperate after a grueling battle against the dungeon boss and getting the treasure, only to be ambushed by a team of opportunist thieves taking advantage of the heroes' fatigue.  After all, unlike regular dungeon raids, you don't get your health refilled upon completion.  Every battle feels like a constant stream of adrenaline, leaving the reader on the verge of exhaustion, wondering whether they'll get out of this predicament or not.

However, as with any child-friendly Manga, there's bound to be problematic culture clashes.  And Aladdin's compulsive habit of constantly groping any bountiful girl's breasts certainly falls in that realm.  And that's not counting some of the saucier Djiins that can be found elsewhere.  Clearly, this Arabia is based more on the Scheherazade tales of lore, and less on Koran religious overtones.  It'd do no good to censor out Aladdin's filthy little habit, since like Goku's casual groping people's privates to determine their sex, it's a pretty important story element.

But the role of skin reveal shouldn't be that much of a deterrent for reasons that'll be outlined later below.  So far, a personal fan favorite would be someone who reminds me very much of Cassandra "Batgirl" Cain; Morgiana, the straight-faced stern looking girl of the Finalist Clan, composed of the toughest warriors on the planet.
Unlike most Tsundere tough girls who start out as tough-boiled eggs but let their defenses down in the presence of their love interest, Morgiana betrays no convictions this way.  She gradually softens up and begins to open herself to others, but she never loses that fighting edge.  What's most noticeable is that despite her aerobatics involving a variety of kicks, with her barefooted legs, there's remarkable very few crotch shots of her in action.  The lack of male gaze in her fighting techniques led me to believe that the author was a woman, and the Omake (extras) at the back confirmed it.
In later stories, Aladdin even enroles in a magic school that has a energy diagram that's very reminiscent of the Nen chart from Hunter X Hunter.  Anybody familiar with the complicated nature of Nen training should appreciate the similarities, since it's certainly well-thought out and not just a shameless pandering to the Potter fanbase.  The result is a more interesting read compared to Negima with their stock loli Barbie figures.

But it's not just the action that dominates - there's still time for talking head scenes that manages to stay riveting in terms of arguments.  The current arc has what's a war between two different magical nations, each with their varying policies.  One believes that magicians should found their own country, taking control over the majority of the unpowered population that's more interested in lazying about and have no further ambition.  The other side believes that all citizens can contribute to their nation, regardless of class.  This is a gross oversimplification of the clashing viewpoints, but it serves as a worthy explanation.  And the major bad guys aren't even the main instigators behind the conflict!  It happened purely organically as a result of a country's agent having conflicting emotions over the side he's working for.

And much like the original Arabian Nights it takes its influence from, you're constantly left wanting to see what'll happen next.  The full realm of variety and innovation makes it a contender for what could very well be the next Full Metal Alchemist.

The constant one-up-manship for rising power levels between opponents rivals One Piece in terms of imagination.  It succeeds in a level of dealing with magic without emulating Fairy Tale, which is an accomplishment in itself.  And the artwork and character design are closer to what would be more appealing to typical Manga fans, compared to the relatively goofy art of Eichiro Oda.  Plus there's the added bonus of not that much repetitive exposition that's such a common theme in typical One Piece arcs.

I'm looking forward to it coming out in August! 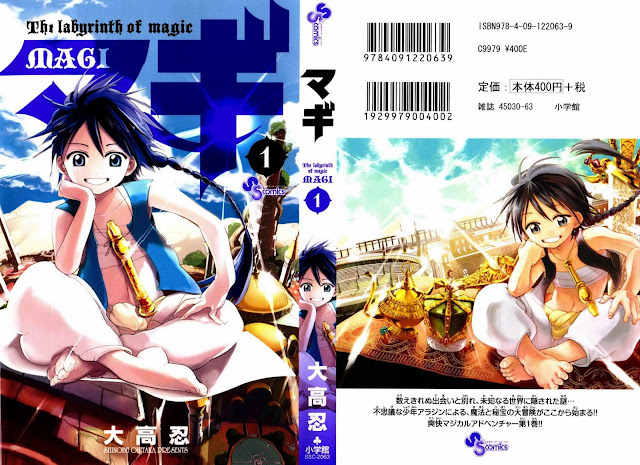