The last two weeks leading up to the end of Christmas vacation has been some of the busiest time I've spent lately.  Normally, I'm wracked with anxiety of having a large New Year's party with dozens of Dad's relatives, who mainly speak French, and wind up crowding the house.  I'm very claustrophobic around people, and having a multitude around me is hell on my senses, not to mention all the preparation beforehand.  Usually, I'm reminded of their names and make polite small conversation before running away to more comfortable realms.  This year, there were less people invited than usual (24 instead of 35), but it still felt pretty suffocating.  I coped by holing up in a private room and caught up with the 5th season half of Breaking Bad.  The relatives didn't mind - they knew of my social phobia and deafness, and were more accommodating being around themselves.

However, a few hours later, I was starting to lose my patience.  The guests were expected to arrive at 2:00, and they didn't start coming over until ten minutes before 3:00.  I hadn't eaten much for breakfast that day, expecting a large lunch with all the food they were going to bring over.  Around 4:00, I was starting to get rather anxious and feeling hungry.  To my surprise, everybody was still standing around an chatting with each other rather than taking samples of any of the copious amounts of chips and nuts available.  To me, the main reason to go to a party is to enjoy a plateau of foodstuff you wouldn't be able to sample otherwise.  These people seemed to want to socialize more than eat, which left me feeling more isolated than usual, since everybody was divided into their various fractions and talking into an incomprehensible din I had no hope of understanding.  It was suggested that I heat up some leftovers if I was feeling hungry, but I likened this to going to a fancy restaurant and while waiting for the waiter to deliver dinner, opening my suitcase and taking out an apple.  To bring the restaurant analogy further, I started loading up on bread and butter to ease my hunger pangs.  This lasted until the annual traditional appetizers of Deviled Eggs were brought out, and I began to calm down a little until the main course was ready.

Prior to that, I'd spent the last week and a half of my remaining free time transferring my old stuff on VHS tapes to DVD.  It was no easy feat, since there were some shows and movies that played better on the transferring DVD/VCR machine, and others that had the captioning remain intact on an older VCR.  Needless to say, I cared more about the quality of the captioned subtitles than the visuals.  And I had to calculate which videos could be taped on the top machine, or on the bottom.  The stuff I saved over the years was quite diverse, ranging from The Naked Gun TV broadcast movies with extra scenes not included in the DVDs, the Mr. Boogedy movies, some animated one-shots (Blondie, Hagar the Horrible, The Real Ghostbusters Halloween Door), WonderWorks' Happily Ever After (an animated special about a girl dealing with her parent's divorce), Wayne & Shuster shorts, Rowan Akitson Live and Big Bird in Japan.  So far, my only real regret is that I wasn't able to copy a single tape that for some reason or another, seems to be copy protected.  There's probably a way to save it via a computer, but I don't have the technological know-how to upload it in the first place.  That'll probably have to wait until later.

If it were a simple case of just taping whole tapes, the process would've gone much faster.  But because I had so much programming spread over various tapes, the procedure took me longer than expected, because I wanted to combine similarly themed shows and movies together on one DVD for easier access.  That meant constant previewing tapes to find any shows that weren't labeled, double-checking to see whether the captioning was consistent on one machine or another, and basically timing all the content to fit properly within a 4-hour taping frame.

Even though I'd gotten a VCR/DVD converter as a present last year, I put off the effort because I was paranoid about the VHS tapes breaking down during the copying process.  Actually, the newfangled machines DID break the tapes by rewinding so fast that they snapped.  However, due to some mechanical surgery and experimentation, I was able to eventually deduct how the interior worked.  Each time I put it back together, I was mystified as to why it wasn't running properly, and was beginning to worry that I'd lost some filmstuff FOREVER.  It wasn't until I looked up a helpful interior online that I figured out where I'd gone wrong, and made necessary corrections.  However, even with the film reel in the proper place, it still wouldn't run.  So I took apart another abandoned VHS tape to compare, and found a minor part in the middle that'd fallen out was installed upside down.  So I put it back in its proper place, and lo and behold, it worked!  The second time the tape snapped, it went much faster because I now knew what I was supposed to do.

And yet, for all the overdue copying I've done, I don't feel that I've done anything productive at all.  Sure, I've been getting up early in the morning to do some major painstaking reproduction down to the minute based on similar subjects and theme, but I consider it a loss if I don't feel inspired.  Part of the problem stemmed when I was about 80% through, and only had to fill in some blanks with some commercials not available on Youtube.  The closer I get to my goal, the slower my response in completing it becomes, since I'm convinced that I can afford to take my time since I'm no longer rushing.  Thus finishing my projects begin to approach a Zeno's Paradox zone where I get closer to completion without ever reaching my destination.  This major side project being mostly finished, I'm hoping to become more serious and focus on my various stories.  I've got multiple pages of notes that I've jotted down that I've yet to put on the screen, not to mention various other notes sprinkled throughout several file folders simply because I thought I'd go back to those later, and I'd remember seeing them again when the time came.  As such, organizing these sporadic shots of memory is an arduous task, and I spent my free time copying tapes. 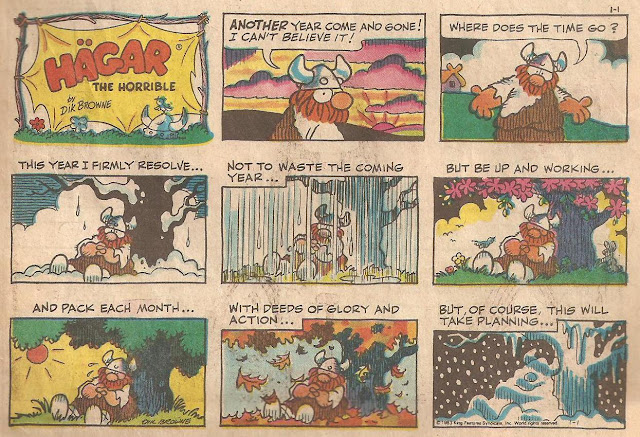 Likewise, I'm afraid of allowing myself the luxury of wallowing in praise because EVERY TIME that I've allowed myself to take pride in anything I've done, EVERY SINGLE TIME after, I've regretted it because I become too imbued with self-confidence, and believe I can do no wrong, and wind up making silly mistakes because of my overconfidence.  The irony is I'm terrified of accepting any criticism, both good and bad, but not getting an opinion of my work is just as isolating. 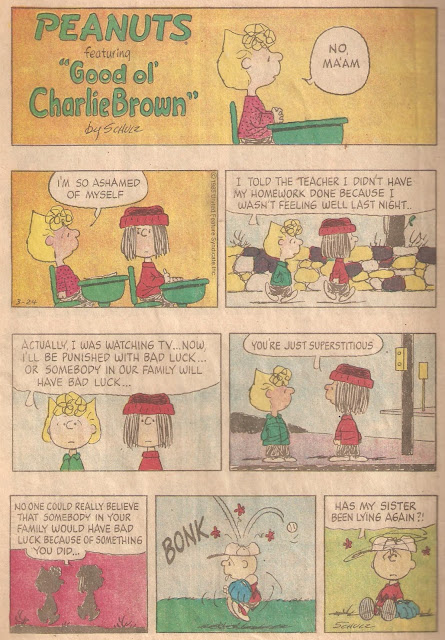 To make up for any potential lapses in the future, here's some updates of previous posts I wanted to include, but was waiting for the right time to do so.  There may never be another time like the present. 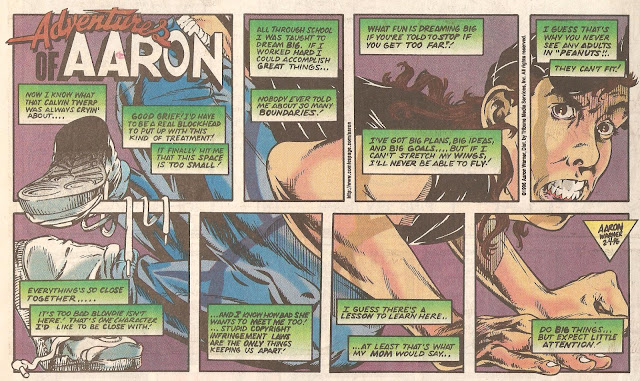 Before a certain homage comic, there was an early Adventures of Aaron comic that showed up in the first month of 1996 before the infamous Calvin strip it would be better known for.  It displays the same points of space limitations that Bill Watterson fought against all his life in a typical over-the-top teenager way, and none of the eloquence of a philosophical debate cleverly hidden behind snowmen metaphors.  There's also a sidebar that's more cringeworthy, and not worth the time taken seeing it.  What's that, you say?  You want to see it for completion's sake, even if you wind up hating it in the process?

Don't say I didn't warn you.  This kind of infantile humour is why Aaron never quite caught on, despite its elaborate artwork.  Crude humour can only take you so far.

When I was pointing out various cartoon figures who'd lost weight and looked more appealing, one lucky victim was Broom Hilda.  Realistically speaking, if she actually attained model status figure, the results would be more disturbing than anything else.  Not everybody can conform to the same physical makeup as the top 1% of perfect people, and this shows us why. 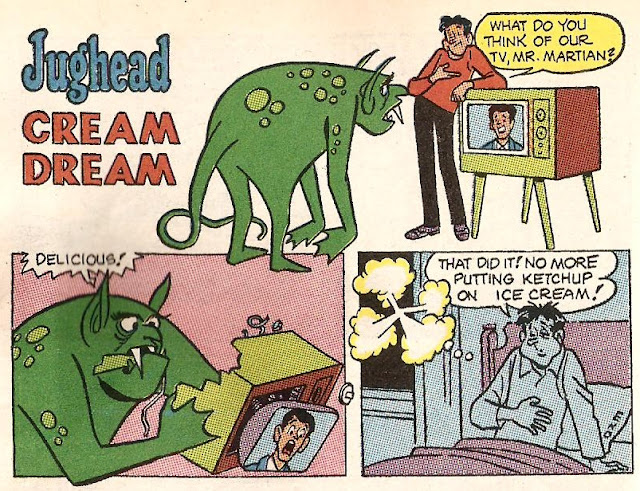 A short Jughead nightmare that wasn't included, because I felt it would detract from the nightmare scenario there.

An alternate take on the whole "world coming to an end" theme that was so prevalent last year.  Three guesses for whose philosophy I most agree with. 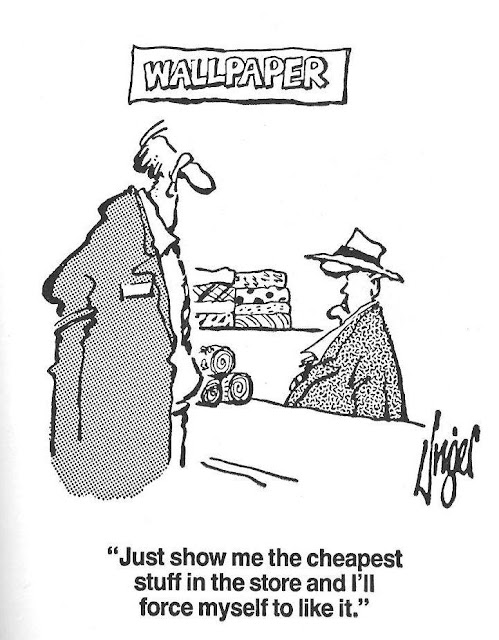 One of my more humourous entries that was part biographical, mostly lifted elsewhere was my obsession with saving money no matter the cost.  This little snippet is my basic guideline to grocery shopping.  After all, the tastiest meal is the one that costs the least.  Even if you have to choke down every single bite, no matter how awful it is.  Just think of all the money you're saving!