Growing up deaf, I had to learn how to lipread pretty early in order to understand people.  Actually, it's a common misconception among hearing people that children need to learn how to speak first, before learning how to read.  This is completely backwards when it comes to newborn children who can't hear.  I learned how to process language by learning how to read, THEN by converting those lines on paper into sound.  (Deciphering pictures from comics and being read to multiple times certainly helped too)  Just as I find it perplexing that there are people out there who have trouble reading lips, I find it amazing that people are able to understand what's being said without help.  Even so, it took me several years to be able to learn how to talk correctly.  Until I was able to master the aspects of tempo, timing and pacing, people had trouble understanding me.  I've been told that I have something of a Deaf accent, which is imperceptible to my imperfect pitch.

Although the general consensus is to teach deaf children sign language, I never gradually warmed up to the finger dexterity, though I still do retain the basic alphabet and numbers.  Anything more complicated that can't be clearly communicated via visual equivalences is beyond me.

I had a next door neighbor who was the school commissioner who I sold some fundraising chocolate bars to.  When he finally got the chance to talk to me at a social gathering, he reintroduced himself as someone on our block and tried to jog my memory.  However, I had absolutely no idea of what he was saying, even though he repeated his sentence five or six times.  It was only when my mother intervened and said, "You sold him chocolate" that I understood.  Until that point, he hadn't quite realized the gravity of the uphill struggle I lived with on a day-to-day basis.  To be fair, there were several factors against him - he was taller than me, he had an accent, and I'd never talked to him before.  From that point on, he was a viable help in getting me an interpreter through High School.

Most Autistics look away from the eyes as a way to avoid being overwhelmed by the visual stimuli those ovular orbs provide.  There's simply too much information conveyed in there, as well as the eyes constantly moving about.  I managed to slip through the cracks of that social barrier by simply focusing on the lips instead.  They're a more consistent source of information relevant to what they're talking about, and people can hardly tell the difference of where I'm looking at anyways.  (Go ahead, try it out.  See if anybody notices)  Even so, it takes me awhile to get used to a new person's mode of speech, since every person is different, and they have their own discrepancies of how they talk.  One of the most annoying tricks is when someone smiles all the time as a way to hide their nervousness.  That might work with reassuring total strangers, but it plays havoc for someone who relies on reading lips.  If all you see are teeth, it's harder to tell what sound is being made.

Despite my ability to read lips, it's all useless if I can't get any sense of what's going on.  It doesn't help that a lot of words look exactly the same on the lips.  A 'B' looks just like a 'P', and you can only tell the difference between a "Pager" and a "Beggar" by the surrounding objects nearby.   Without any noise, they look the same, but hearing the little sounds count as subtle hints to help fill in the blank.  It's exhausting to constantly double-check every spoken word without any reference.  While the cult hit The Rocky Horror Picture Show opened up with a closeup of singing lips, I had absolutely no way of making out the nonsensical lyrics without help.  (Names and locations are especially hard, even in given context) Even after I finally saw a subtitled version years later, it still lacked the added benefit from the improv audience participation.

That being said, there's a surprisingly numerous mascots for various commercials that were nothing but a disembodied mouth.  Not exactly in the same disturbing realm of a cheshire Cat smile, but weird nonetheless.     When your entire life revolves around making sense from reading lips, you begin to notice these kinds of things.  One such short-lived example was the Tang mascots with arms and legs.  These guys could be considered perfectly normal, save for having mouths bigger than their bodies. 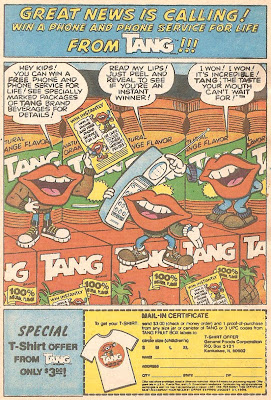 Even so, despite their openness, I could never actually understand anything that these mouths were saying.  In particular, the Twizzlers ads weren't made any easier with the mouth suddenly transforming into another object during mid-sentence.  There's a surprisingly amount of time given in the American animation industry to make lip-syncing consistent even as overseas animators rely more on repeat open mouth formations for easy multi-media purposes.  Most popular dubbed Animes rely on this, which leads me to wonder why, if script re-writers have such a hard time finding choice sentences in a limited time frame, but aren't averse to editing a "controversial" scene, why don't they just reuse a simple frame of the character talking to make it easier for them?

Ironically enough, there are no toothpaste mascots I can think of that are represented by the mouth.  They're all either anthropomorphic teeth or toothpaste tubes. 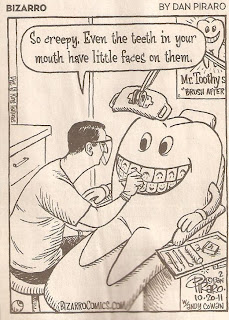