The Colour of Peanuts

I realize that I haven't been updating my blog as much as I intended to, and I'm sorry about that.  I've been preoccupied with various other small projects, including doing some rewriting and scanning of other potential blog topics to be posted in the future.  I'm something of a perfectionist, and baring any sudden revisions that may come to mind, I'd like to jot down as much potential ideas I've got before I'm suitably satisfied with the results.  Another reasonable excuse is that I've got several Garfield ideas that I'm inspired to remix, but am slightly intimidated at the prospect of having to reference all the relevant comics and script, now that the main search engine has disappeared.  (BTW, when did the missing domain number change from 404 to 410?)

That said, I still feel somewhat guilty for not updating my blog within the course of a week, when I had all kinds of ideas rattling in my head; so here's a minor placeholder of something I scanned in the future, but doesn't seem likely that I'll find anything for immediate use anytime soon.  So to belay any fears that I've shuffled off this mortal plane, here's two more Peanuts strips that might've lost some of their potential punchline with the lack of colour in the Fantagraphics collections.

There's not much missing here, save for the semaphoric message at the end. 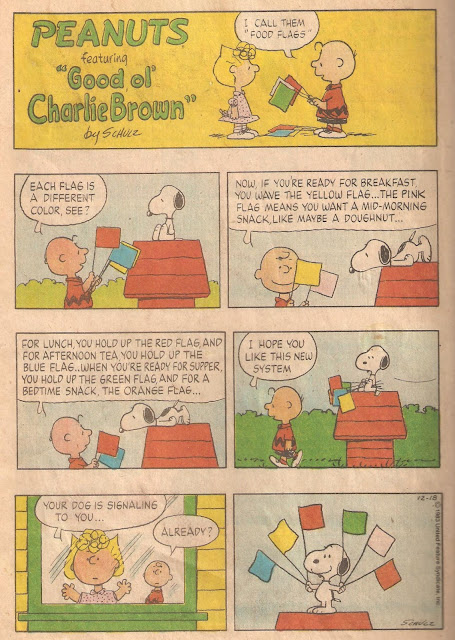 Now, this one is more visually striking, though nothing is really lost in the transaction.  At least it makes the outfielders look more likely to blend into the background than the black-and-white image would provide.  Or how it would look with just the lines - I haven't had much of a chance to check out the Peanuts albums past the 10th book yet, unlike some people who've noticed some disturbing... irregularities in the later strips. 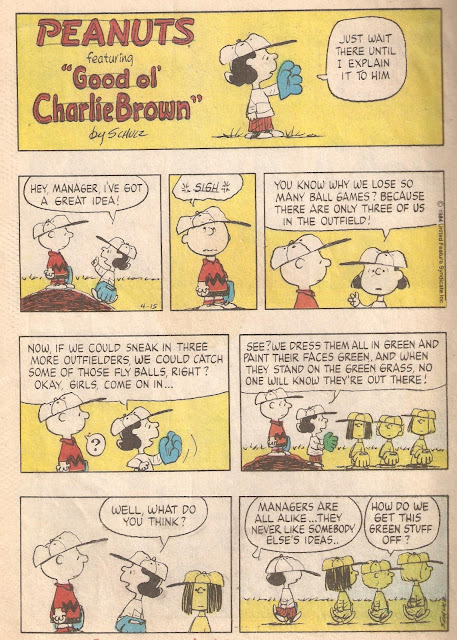