Lately, there's been all kinds of attention paid to Spider-Man's 50th Anniversary, from the Atari ads that were far more entertaining than the actual video game, to the wonkyness of the newspaper strip.  It's the latter that I'll be focusing on with a certain book I picked up that collected some of the early stuff in a colourized cut-up format, and it's just as overdramatically bad as you'd expect.

It's usually the best interests of a starting comic strip to make a strong impression over the competition, even more so if it's a serial format.  So things get started at bat right away with the Daily Bugle inviting DOOM over to make a compelling argument in front of the UN.  I'm sure this won't go wrong at all.  In a way, this kind of feels like a cheat, since DOOM is more of a Fantastic Four villain than Spidey villain, but he did show up in one brief story early in the Dikto run, so I suppose it gets a pass.  That, and Doctor Octopus, Spidey's real definitive archenemy, (Green Goblin's reputation notwithstanding, Doc Oct is closer to Spider-Man's MO in terms of intelligence, scientific accident leading to power and tragedy) makes an appearance in the second story in the book, so it's not a complete loss.

One of the major reasons of enjoying Spider-Man is seeing the always amusing external complaints from Peter's antagonist boss, J. Jonah Jameson.  He's the kind of man you love to hate, (though only from a distance, since being in the same room with him would be beyond endurance) and pretty much the only character who can run his mouth off at every opportunity and yet, for all his verbal barrage, never even gets so much as a punch in the face.  Egg on his face maybe, but never any violent reprisal other than being tossed around and webbed a bit.

Ah, now we get to the main reason DOOM's been called over - so he'll be able to take care of Spider-Man once and for all.  That's kind of like using a heat-seeking missile to take care of a fly, but then, Jameson's never quite been the most rational person when it comes to a certain "public menace" whose only real crime is solving crime while being funny at the same time.

Expecting any reasonable compromise between DOOM and other S-heroes is pretty much a lost cause.  This is a man who claimed diplomatic immunity against Superman, for heaven's sake.  After some more jim-jawing with Jameson, Spidey decides that he's said his piece and jumps out the window to swing away... 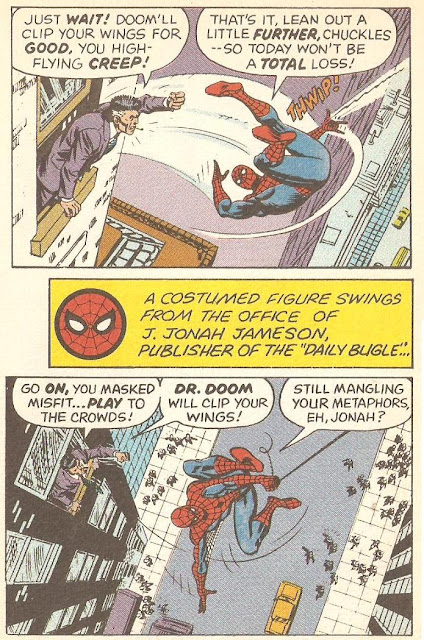 ...and then immediately, we get a recap of last week's events with entirely new dialogue.  This exchange is then intercut for a week with various people seeing Spider-Man swinging away from the Daily Bugle window, women fainting at seeing a man jump out the window, Mary Jane admitting she's got the hots for Peter Parker, Aunt May wondering who that terrible Spider-Man could be, with a photo of her nephew in the background, and news of Dr. DOOM arriving at the UN. 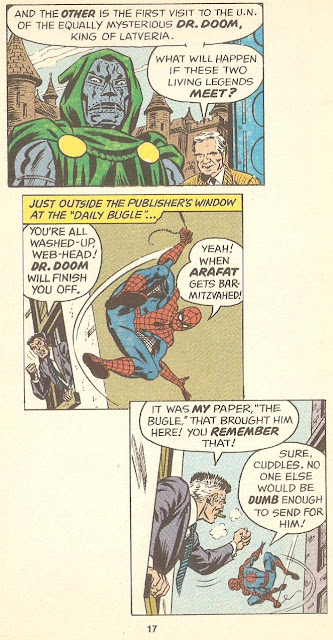 S-hero comics are basically regarded an action-filled soap opera, which would make them a natural fit alongside those other strips like Mary Worth, Modesty Blaise and the like.  But in a restricted newspaper panel setting, there's not much chance to show action on a day-to-day basis, which is pretty much why everybody is recapping information that happened five seconds ago, lest they forget their goldfish memories.  That must be why DOOM keeps dramatically announcing his name in the first person. 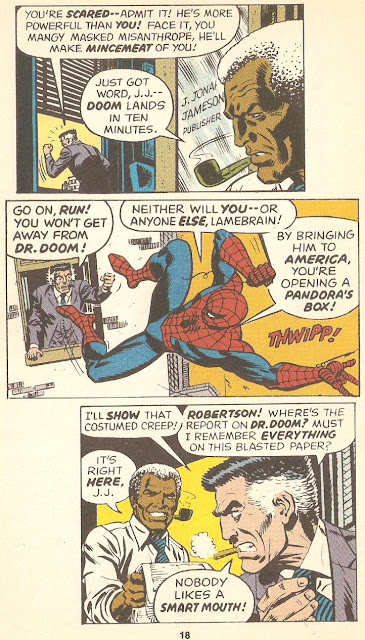 This is the fourth time that Spider-Man's swung away from the same window with a different snappy retort to Jameson's yammering.  (Keep in mind that this is supposed to take within the timeframe of about five seconds)  Repetition is the hallmark of keeping audiences satisfied with a certain level of consistency, but this is ridiculous.  Somehow you get the idea that Stan Lee would be perfectly content to write a never-ending daily strip of the two of them constantly bickering, but sadly, they had to move on with the story.

Naturally, at the airport, there's an accident involving a falling box that leads to a grand misunderstanding between Spider-Man and the police, so Spidey's on the run while DOOM gets treated like royalty.  This was presumably before there would be crowds of protesters vehemently rioting against letting such a dictator enter the country to pitch his sound bite.  That is, if any of said theoretical protesters weren't scared of being taken note of and blacklisted for future petty reprisal payback sometime later in the future.

That could explain why the UN is allowing such a ruthless dictator to come over in the first place.  Unlike the Star Trek universe which is representative of a UN that actually works, reality isn't so generous.  It's not unusual for diplomats and dignitaries to kotow to fanatics demanding the royal carpet treatment, even when their human rights records are reprehensible.  Given that the UN has spokesmen representing dictatorships and repressive regimes, it becomes clear why some democracies are lamented on, while repressive countries get an easier pass.  It's easier to go after countries that are just blowing hot air, than countries where implying that they're not that great could be grounds for violent reprisal.

In Quebec, there were student protests that'd been going on for a whole semester, and a bill that was intended to keep said protests down by notifying the police 8 hours in advance, so they'd be forewarned about such a gathering to reduce conflicts.  This was taken as an attack on democracy, since it's every citizen's right to complain and take to the streets if they want to.  Nevermind that the complaint came from a representative from a more repressive country where any protesters need to make their notifications a month in advance.  Other countries' demonstrators are jailed and shot if they're lucky.  And the bill didn't even get passed anyways. 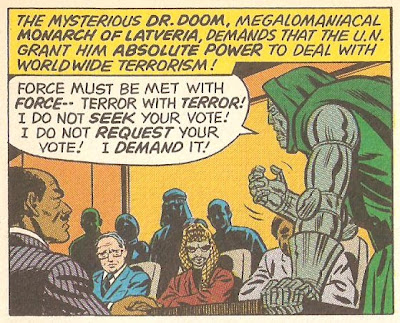 Great motivational prowess there, Doomie.  You probably would be more convincing if you actually presented a resounding argument that didn't rely on menacing anybody you deem insignificant on par with your intellect, and go around dressed in medieval armor with flowing cape and hood.

Since the UN doesn't want to to be under any one country's thumb, it's no surprise that they wind up turning down DOOM's generous offer.  (They can't even agree on things between their own countries)  Naturally, DOOM doesn't take refusal of his perfectly reasonable offers very well.  And just as DOOM's finished sealing the door, preventing any authorities from breaking in and rescuing the hostages, Spider-Man breaks in through the window to stop the Latvian dictator from doing further damage, and that's a pretty good point to stop here.

It's just a shame that the main Spider-Man comic has been floundering ever since the relationship between Mary Jane and Peter Parker was dissolved in the most abysmal banal way possible, and the less that's spoken of, the better; and it's not really an argument I want to go into right now.  That's more for other people who're devoted to the character than I am.
Posted by DeBT at 12:33 PM