In the past week, my sister lent me a copy of the Dororo omnibus she'd bought on a whim because it was by Tezuka, and she thought I'd like it. On an unrelated note, I managed to borrow the French version of Kamui-Den from the library. I'd been alternating between the two on and off for several days before I eventually noticed that the dimensions of the two books were coincidentally identical. 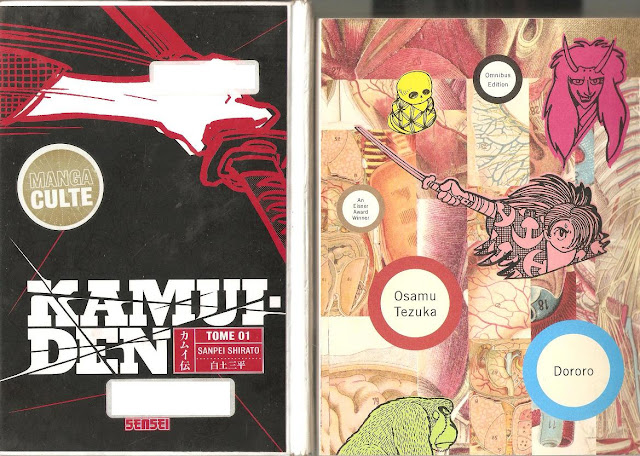 Well, the exteriors were similar, but the interiors were not. I'm not talking about the artwork or subject material, though there's quite some similarity between Dororo and Kamui, although both take place during the Edo period, they could not be more drastically different from each other.  One is a cutesy wandering Tezuka Swordsman hunting demons to get his body part back, and is constantly tailed by an annoying sidekick kid thief. Dororo was even described as the main inspiration (and rip-off) for Blade of the Immortal in Viz's retired Pulp magazine. There's also shades of Kentaro Miura's Berserk in how the Swordsman Hyakkimaru is constantly hounded by demons wanting to devour his remaining surviving flesh, and never give him a moment's respite or rest. 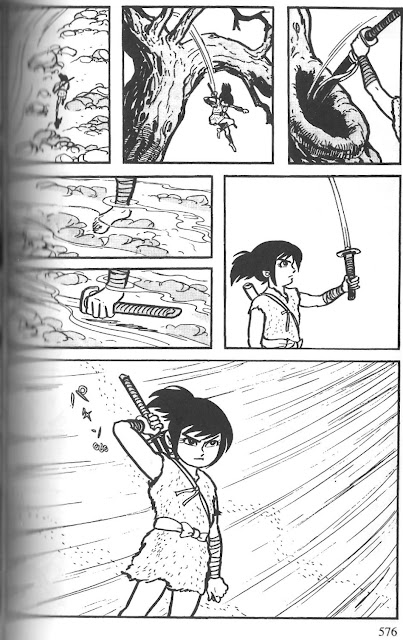 Interestingly enough, Dororo was largely influenced by Kamui. American Manga veterans are most likely to be familiar with Kamui as Viz's earliest attempt at marketing Manga to a comic audience, and was targeted at the same kind of people who would've enjoyed Lone Wolf & Cub. However, the earliest inceptions of Kamui-Den is the precursor to the more serious artwork that would appear in later years. Kamui-Den is often described as the definitive Ninja Manga before Naruto came along, though there's very little actual Ninja-ing in Kamui. It's more about life in Edo period than actual acrobatics and sneakery. 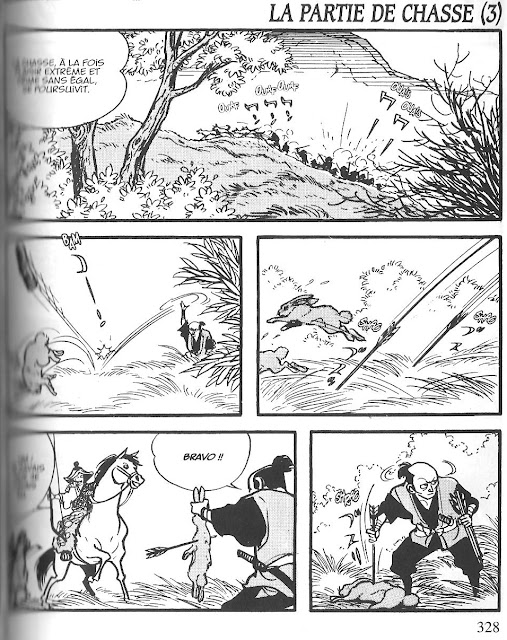 While Kamui-Den has artwork that's reminiscent of a simplified calligraphy style, don't be fooled by its kiddy outlook. It's actually a pretty gritty look at the life and times of people living during that time period. And yet, for all the trauma and violence that happens, it doesn't feel sensationalistic at all. It focuses much more on how people back then lived that you practically feel like you're actually living there, and can better understand the historical archaeological implications than any stuffy dry textbook could convey. To me, it feels more authentic than the watered-down episodic comics of Usagi Yojimbo. 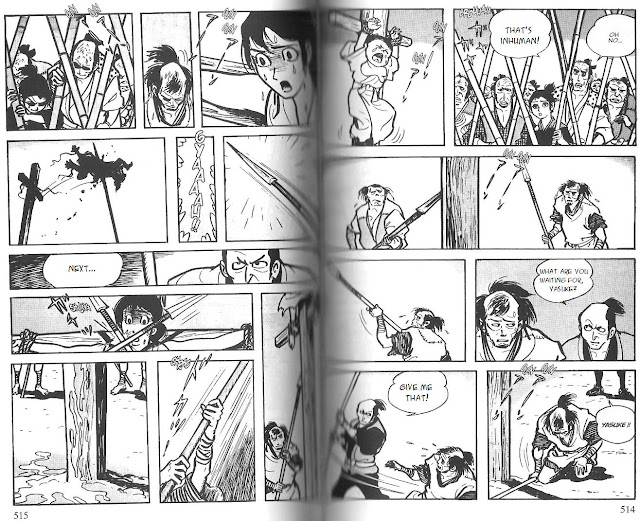 No knights in shining armour to save damsels and their children on death row here, though there is some occasionally violent swordplay involved. 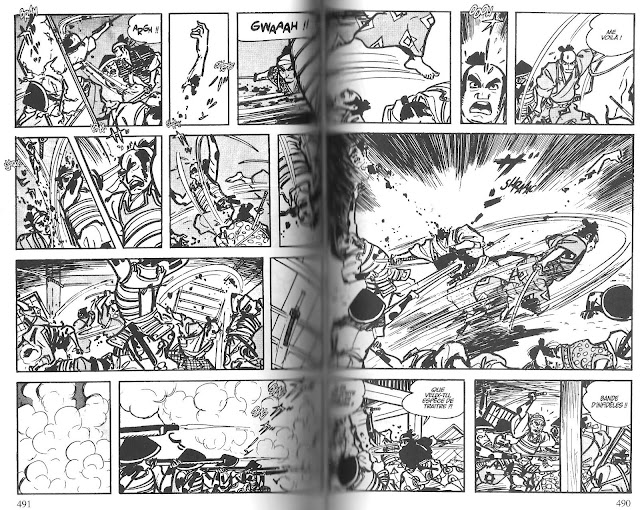 Let me give you a close-up of that pivotal larger panel, because; HOLY CRAP. 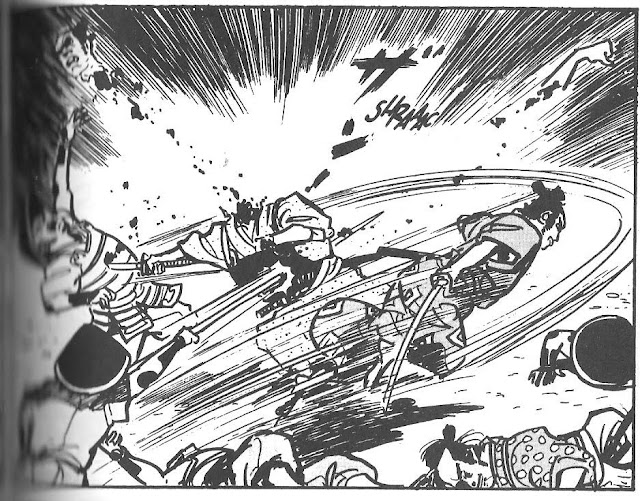 A reoccurring theme of Kamui is that it'll often go into segues into animals and their lives, interspected with shots of Nature. In the second chapter, the story diverges away from the people and focuses on an albino wolf being the runt of his family. This metaphor will be seemingly dropped in the next chapter, but this wolf becomes a reoccurring element some 600 pages later. In fact there are numerous side and secondary characters that make short appearances early on, only to briefly pop up again some hundreds of pages later. The titular Kamui appears in MAYBE 300-400 pages throughout his own book. 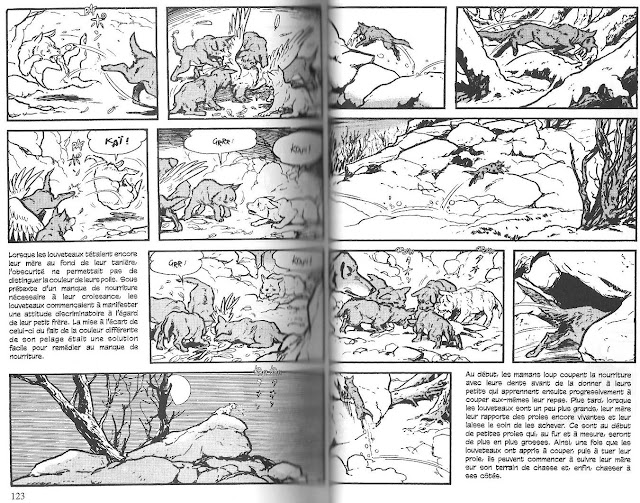 The constant shifting of viewpoints would be considered annoying if it were released in individual 200-300 Manga volumes, which is why I suspect this was collected together in such a large amount. To release them in any other way would be narrative suicide. The number of pages for the Kamui omnibus may seem like overkill considering the high panel content, until you actually take a look inside. Each chapter is about 100 pages of smaller stories broken up throughout, but it all goes so seamlessly that it's impossible to imagine anything being left out. 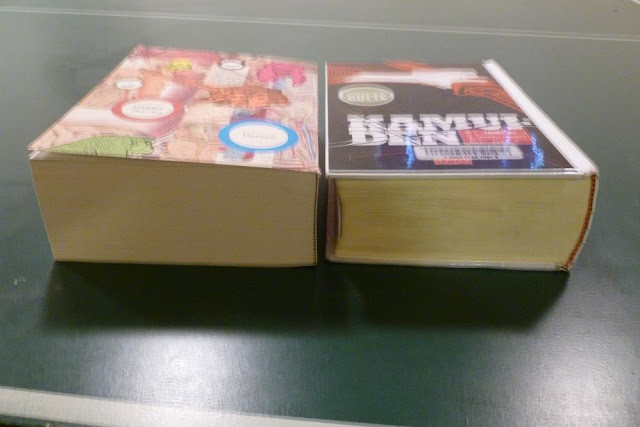 So what was it about the two books that I noticed? Well, when placed side-by-side, they look practically identical in size and volume. This view reminds me of the sadly retired Grotesque Anatomy example of the now defunct Shonen Jump magazine comparison of American comics and a cereal box. 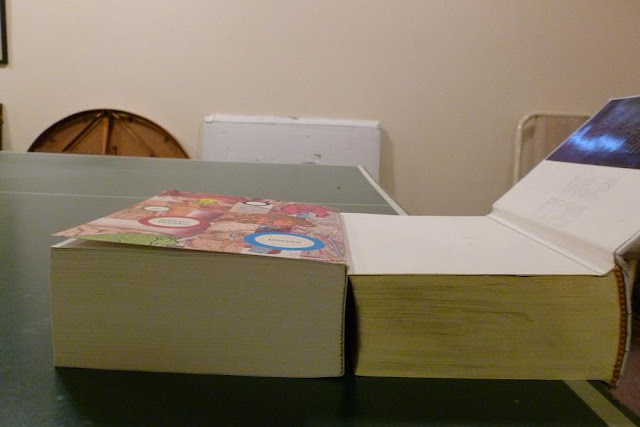 Yet a closer look shows that the content is radically different. Dororo is an impressive 800 pages served up in one neat package. But Kamui-Den comes in at just under a whopping 1500 pages. That's almost twice as much as the other. Your eyes are not playing tricks on you. Dororo is on the left, Kamui is on the right. I just removed the library hardcovers on both sides to even out the equation.

I saw that the page thickness of the French book was significantly thinner than the American stock. While there's some concern that pages might get torn, or the artwork may be visible on the other side, that's apparently not much of a concern in international markets. This is the kind of detail that I notice for printed paper quality. Some printers seem to have higher quality paper stock, while other markets are perfectly satisfied with lesser ones. It's as if the sophisticated American market prints these high-value papers out of a displaced sense of fear that if the book binding and paper isn't top notch, the interior work won't be taken seriously. I suppose it all comes down to personal preferences. I'm not so much a fan of high-glossy pages that reflect the light if the book isn't held at a proper angle. I don't want my reading habits to be controlled by the medium I'm used to, which is an argument I've ironically heard from people resistant to reading comics on the computer. By the same token, I'm perfectly content with soft pages that are easy to flip through, and don't get stuck together.

I think this is important to point out the differences of which Manga markets that have yet to catch on for various reasons. If Kamui-Den was ever licensed (a pipe dream, but I can fantasize) there would have to be some serious devotion and backing to overtake such a potentially risky outcome. It could be a serious contendor for a Kickstarter program if there's any interest out there. So far, this impressively ambitious project is already up to the 4th volume in French, when even scanlation projects won't even dare touch this Manga. No doubt they're justifiably intimidated at the scope and length of this cult classic.

Even so, I was impressed enough with the description of Dororo's plot that I even wrote a short story satarizing the cliched themes of Fantasy tropes into one neat package.

There was a legend that a newborn baby would be a future threat to the King. The King, not wanting to risk his life to someone else’s incompetence decided to take care of the matter himself. First, he shook the baby violently so he would suffer from sudden death syndrome. Next, he chopped off the baby’s limbs and had them for lunch. Then a poisoned knife was stabbed into his chest. 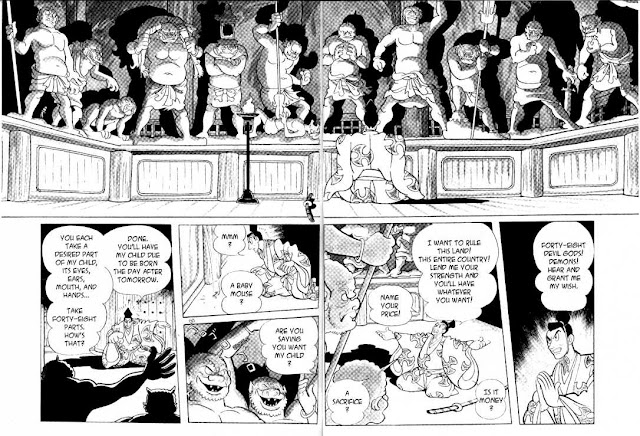 Finally, just to be doubly sure, he threw the baby’s remains into a boiling volcano. 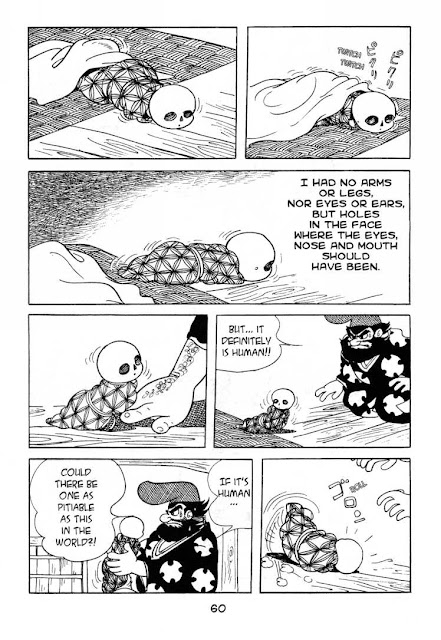 He was raised by the volcanic hermits who lived there, and grew up with artificial body parts. And when he came of age, his parent's house burned down. With their dying breath, they revealed his secret heritage. 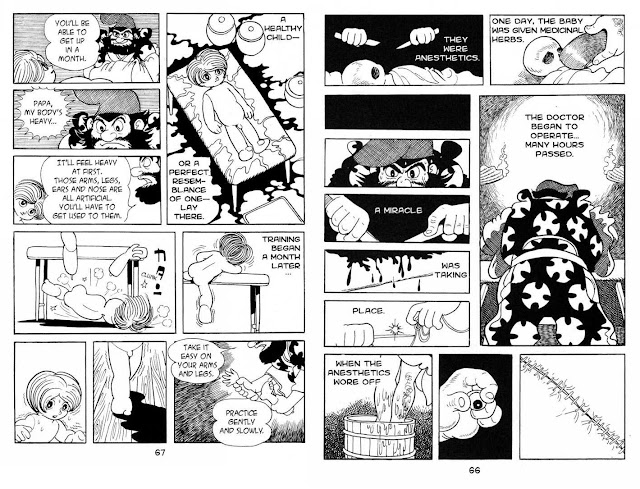 With his prosthetic limbs, adapted as various tools, he climbed out of the volcano crater, vowing to kill the man who so violently tried to end his life. Never knowing... that the King had already died of an infant leg bone lodged in his throat. 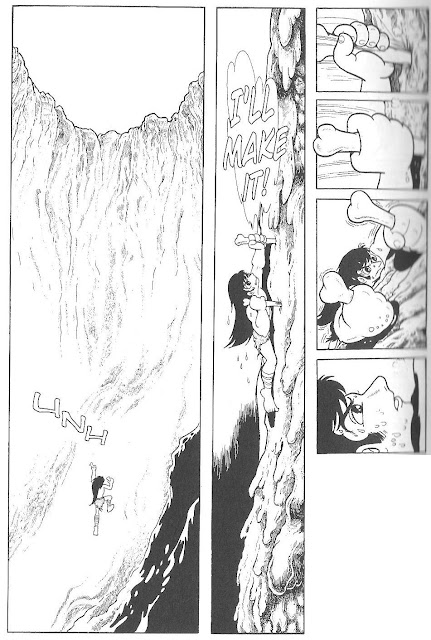