The following is my rambling attempt at trying to decipher the concept of Moe in Japanese culture and how Japan's culture of cute plays havoc with American sensibilities. (despite it being pronounced Mo-eh, I still think of a certain Stooge name when I see it) And what better way to represent that confusion than with out-of context Archie panels? 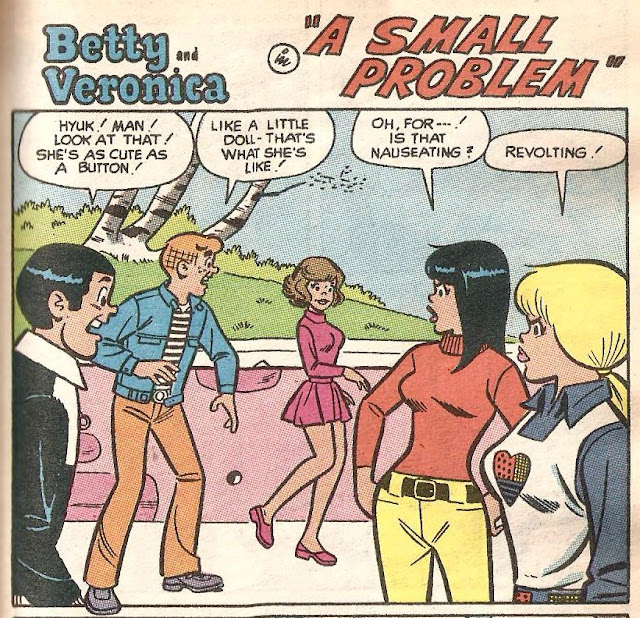 Where it gets problematic is when these diminutive figures look about the same age as a young child, but are actually old enough to enjoy some of the pleasures of adulthood without all the puberty baggage that comes with it. THAT has unfortunate implications written all over it, and is mainly the troubling sign in a medium where attractive-looking youths are the major selling point of Manga success. And if those young children are really older than they look, so much the better, since it gives a plausible reason to handwave their awesome skills. 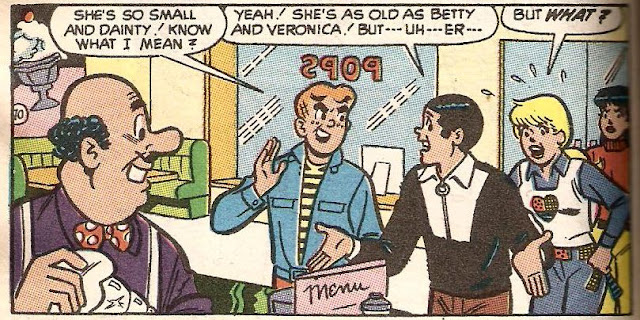 Like how Americans go for violent power fantasies, the Japanese seem content to acquaint themselves with mundane fantasies of normalcy by surrounding themselves with non-threatening sorority girls with small noses. Part of the appeal of young cute girls is that they're easy on the eyes, and their natural navité makes them easy targets for predators who'd want to take advantage of their innocence; and thus, bring along the male desire of wanting to protect such a young easily impressionable girl from outside sources. (Even if those outside dangers come from the protector himself) Understandably, this particular trait makes some people uncomfortable.

However, that particular formula is healthier than the more adult version, which proclaims to reduce Lara Croft to a mere victim in her latest Tomb Raider games. The closest environmental equivalent would be how cuter animals are less likely to wind up on the endangered species list than animals that don't conform to standards of human beauty. Therefore, baby Snow seals are more likely to be considered worth saving than tree frogs. 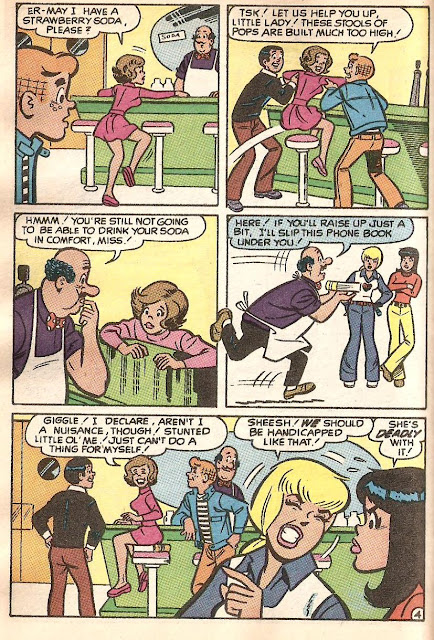 A recent study found out that despite common perception, Japanese men prefer flatchested women to the more rounded swimsuit model. This is more of the realm of wanting to feel natural around a member of the opposite sex instead of feeling all flared up every moment. This lies in a different realm than the typical male fantasy of being around a beautiful busty babe. Rather than being surrounded by a sexual object, some men feel more at ease in the presence of a girl who doesn't make any strenuous demands of them. If this could be explained in an non-threatening way, it would be being sexual without being sexual. It's more ecchi-based than hentai-based.

It doesn't help that any criticism aimed at these lolicon girls responds the kind of "defense from outside forces" that spurs the very appeal they're trying to project. Any attempt to point out their faults will be used as ammunition back at the complainer for daring to demean such an obviously flawless (if vanilla) character. The male Otakus are simply projecting their own insecurities on their idol worship, and thus are incapable of being shown the error of their ways, since the court is heavily slanted in their favour. The argument is set up in such a way that no matter what reasonable criticism of potential abuse or vitriol is sent their way, it'll stand as an example of how these feminist critics are jealous of anyone who doesn't fit to their standards of "beauty". Even if those criticisms have valid points, they'll still sound judgemental in the face of the opposing side of the competition that offers no defense. The more the innocent naif expresses their incomprehension at all the loathing headed their direction, the worse off the accusative critics come off looking bad. 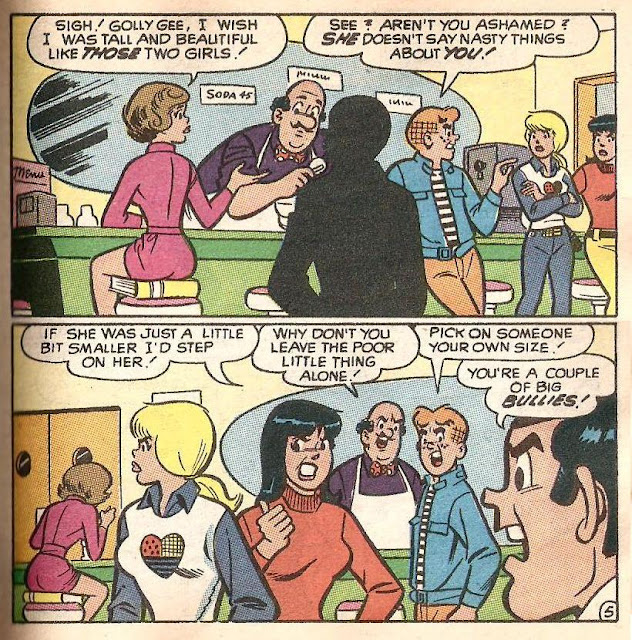 Oh, and don't worry too much about the outcome of the Archie comic. Dilton Doiley walks in through the door, and the two midgets instantly hook it up, much to the pleasure of the girls and the disappointment of the guys. In fact, Betty and Veronica are so pleased to see Dilton get along so well with the "little woman" that they literally swarm over his miniscule body, causing her to lash out at his larger "vamps", which goes to show that protectionism can go both ways. But that's an essay for another time.
Posted by DeBT at 4:12 PM