Nintendo Power is in Another Castle

This year truly is the end times. It's just been announced that after 24 years of tips, Nintendo Power is going to end its subscription, the last issue being on December this year. While it's probably just another meainingless coincidence alongside with Doomsday scenario Manga 21st Century Boys being released in English around that month, the implications are still unsettling.  When the Mayan Calendar talk about the end of the world, it could just as well mean the end of our current world as we know it. While this cancellation was probably inevitable given it's irrelevant redundancy in the face of Gamefaqs which would give helpful hints on the very day the game was released while the magazine would still be in its hype stage, it still feels like a loss.

I only became acquainted with Nintendo Power after I ordered a certain hint guide for a certain game. I'm sure you all know which one I mean. This was essential, since I had absolutely no idea where to find the elusive 7th dungeon after having bombed every wall in existence and pushed every block. It never occurred to me that I should use the whistle or candle in the overworld. (Why should I?) It didn't help matters any that the old man's hint of "There are Secrets where Fairies don't live" proved to be of no help whatsoever. It seemed like just another initeration of one of his ramblings, like Eastmost Peninsula is the Secret. If it were something more obvious like Dodongo dislikes smoke, I wouldn't have had so much trouble.

One thing I especially liked about the Zelda dungeons was that they looked like each separate dungeon could easily fit within the boundaries without any overlap. I'm still waiting for the day when there's a grand dungeon that'll have borrowed aspects of every dungeon implemented into them. That is, a switch that would be flipped in one dungeon could affect switches in all the other dungeons. The closest this was ever accomplished to my vision was in Banjo-Twoie, where levels would be connected to other levels, but that was as far as it got. This simple request for some help put me on a mailing list with a very influential subscription deal that seemed too good to pass up. 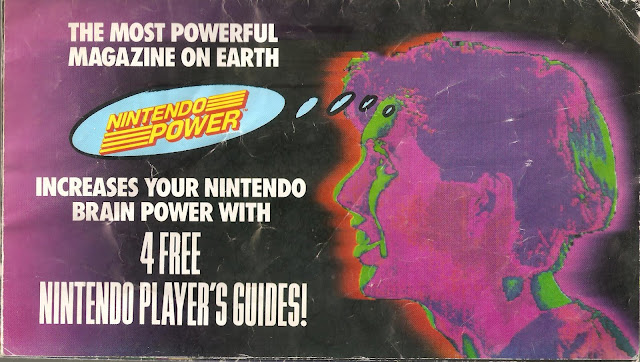 In addition to getting the magazine, I would get not one, not two, but four different player guides! Note that the covers of these advertised guides hadn't quite been finalized yet, but that didn't matter, since the content alone was enough to garner my attention. 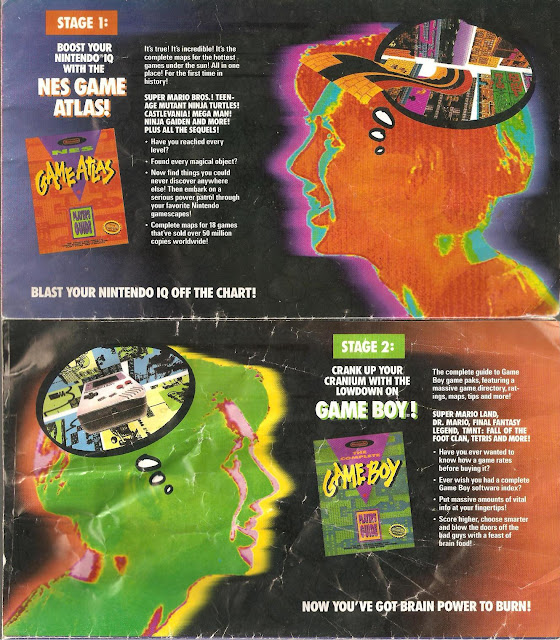 The NES Atlas had the VERY helpful guide to the Zelda 2nd Quest, which was like a hyper version of Mario's Lost Levels. Unlike the first Mario game which just replaced all the Goombas with Buzzy Beetles, EVERYTHING in the new Zelda game was different, save for the location of the first dungeon. The enemies were tougher, there were invisible walls, and no intuitive clues as to what you were supposed to do next. Finishing this game would've been nigh impossible for a child to complete without help. So far, only Orcarina of Time Master Quest and Super Mario Galaxy 2 have delivered anything on a similar level to the 2nd Zelda quest. 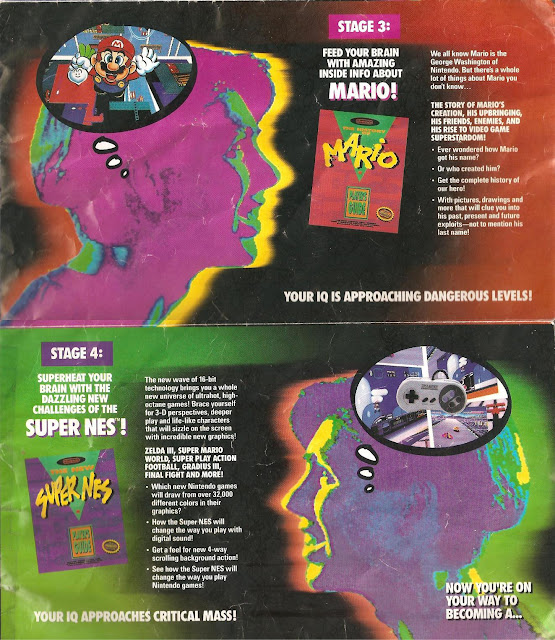 Prior to that, my only experience with Nintendo Power was a Pocket Power pamphlet given out during the release of The Wizard. The general impression was that this magazine was a must-have that seemed very exciting at the time.

One thing that I was slightly disappointed with the Mario Atlas was that there weren't as much promotional doodle art, or Mario's history, and his last name wasn't revealed until the release of the Super Mario Bros. movie, which like all Hollywood adaptions of V-games, darkened the light and fluffy source material. 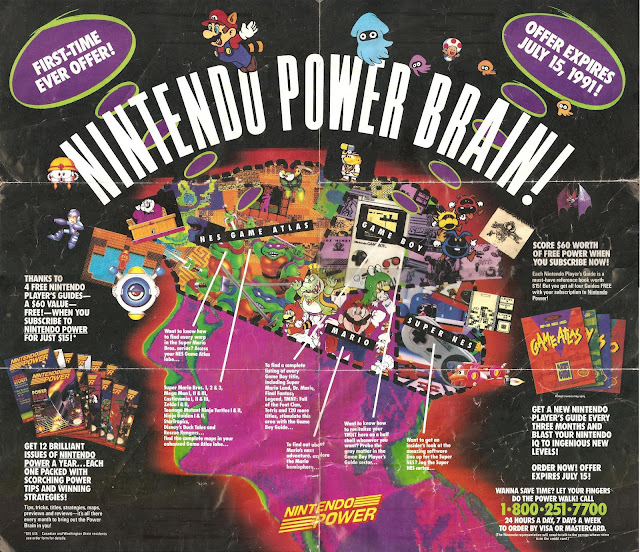 I subscribed for just a year to see if I wanted to stay on beyond the trial period. The Howard and NESTER! comics were just as amusing, if sometimes perplexing if you weren't familiar with the game they were giving hints on. While Howard eventually left, Nester was left behind, and eventually devolved into one-pagers, then was dropped altogether, and only returned for a half-pager in the 100th issue, and again for the 20th anniversary. (I always thought Nester looked like a red-haired Vegeta for some reason. Note the family resemblence?) 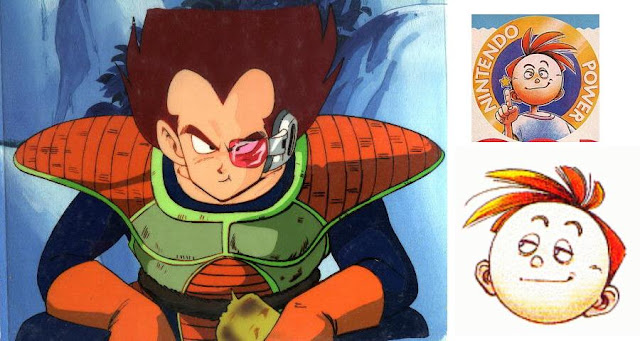 Then they added the Mario and Zelda comics, and I HAD to renew just to see what would happen next. The Mario comics were some of the funniest material I'd ever seen, and I was sad to see that the last adventure was a short comic with Mario and Wario trying to get a Samus doll.  For some reason, this story wasn't part of the Mario comic collection. It would've been amusing to see an annual Mario comic having some tangental relation to each new year's games.

However, the magazine began to enter its redundancy phase around the same time that the Playstation started gathering competition away from more mature audiences who weren't content to squash mushroom heads anymore. The last regular game to be advertised in comic form was Super Metroid, which was rather lackluster despite revealing Samus canonical backstory. The experience felt rather rushed, and it's lack of popularity didn't even bother to continue with another mission after the main story was over, like they did with the previous Star Fox comic. Even though the Chozos were used, the side characters were left out of the game, particularly salesman Friendly Floyd and Nome the Wandering Knight (baring a startling resemblance to a certain Cyborg especially his ironic name, Jet Link).

I only renewed once a year, because I knew that I would get more bonuses from the magazine, such as my choice of Player's Guides and extra incentives in order to keep me on as a member. Why stay on for two years, when they'll appreciate you more if you're going away in one? However, later renewal envelopes began to get more desperate, with having an angler fish lure you into a trap, or comparing a tough level with cafeteria food. They simply didn't have the same level of bite compared to their predecessors. 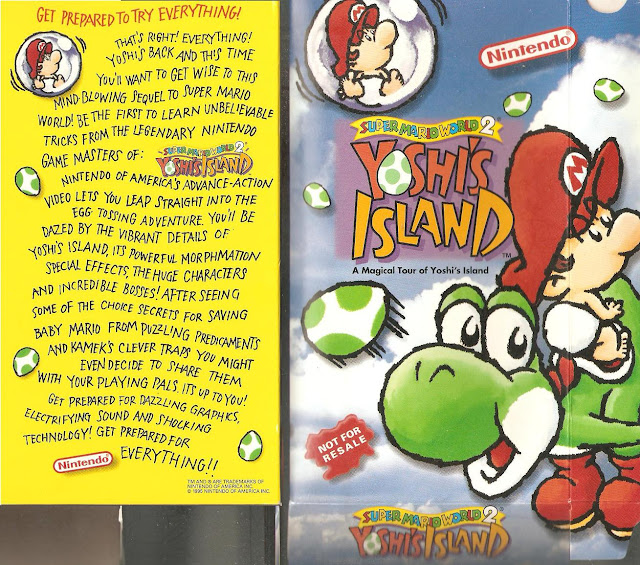 I eventually let my subscription run out when I no longer felt the same spark of excitement with the newest games, since they seemed too easy compared to their earlier output. Not to mention that my desire for finding hard-to-find NES games that still worked was phased out once the concept of emulators was shown to me. At least the Gamecube games were exempt from this. Then I discovered Super Mario World hacks that basically gave advanced versions of Mario games that were more imaginative and harder than the Nintendo originals, and required intuitive control of certain skills once thought mastered.

And yet, I still continued to keep the magazines and various incentives to keep me on as a member long past their sell-by date. Especially Super Power stickers which could be used for discounts on any players guides or merchandising in any of their catalogues. I always saved up for the player's guides, though I'm regretting not getting the GameBoy Advance guides that were only available on magazine racks, since I was holding out for them being available online. The second issue had some tips on Advance Wars that could've come in handy in being able to comprehend the complicated strategy involved, since the learning curve was very unforgiving, and the slightest military mistake could set you back for miles.

One particular bonus that I've still kept all these years are the popular Super Power Club cards, with descriptions and challenges of various games on the back. I have no way of knowing if these cars were randomized or consistent with every issue, since I knew no one else who bothered to subscribe to such a "kiddy" magazine. Maybe someday, someone will be able to comiple a comprehensive collection of all 200+ cards. 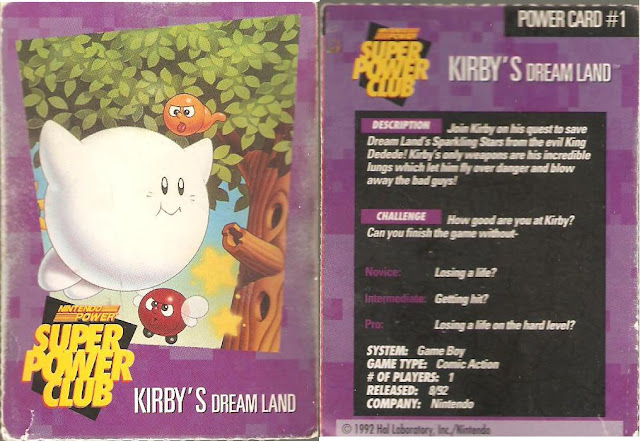 Some of the notable challenges include:

Challenge: Use the three Warp Whistles to get to World Eight. Then, try making it all the way through to Bowser without--

(This challenge would be impossible to complete, because you need to be big Mario in order to smash your way through the bricks early on in the 2-sided fortress)

Challenge: In the second level, how many extra lives can you earn for repeatedly bopping birds into the wall?

(I'm proud to say that I've managed to get up to 10 lives on that level. This made going through the later levels much easier)

Challenge: Once you've reached GreenWood Forest, how far can you go without using your sword?

(Hint - use magic to defeat your enemies, then use their dropped gems for more. Be sure to stock up in Grass Valley beforehand)

Challenge: Which Chapter can you finish without taking any damage?

Challenge: How far can you get with only a certain # of heart containers?

(A hardcore gamer's probably finished the game with only 3 hearts)

One thing that I appreciated while looking through the latest Nintendo Power issues at the library (yes, there are libraries that held Nintendo Powers - if it'll get children reading, they'll order it) there would be homages to past games and cult hits that deserved more attention, such as Little King Story, Astro Boy Omega Factor and Shantae.

In fact, years after I quit my subscription, I only began to look through my old magazines in order to see if there were any quality games that I passed up the first time around that I could pick up for bargain prices. Unfortunately, my Nintendo Power index only went up to issue 70, and year 1996 (issues 80-91) are printed with looser spines, compared to the stiffer spines of the other years, making flipping through them harder than necessary. It doesn't help that your only clue of whether a game was mentioned or not was by looking in the releases index in the magazine, printed in itty-bitty text which would strain your eyes trying to find that elusive game buried somewhere in all that crap.

However, the standard for quality reportage of Video Games was Next Generation magazine, with its in-depth articles, constructive criticism and comparisons of games and how they should be, it raised the standards compared to its competitors, which were virtually indistinguishable from each other. Next Generation rose itself above the pack. It was the Comics Journal of the V-game world.