Just recently, it's been announced that there's going to be a College-funded course for Canadian cartoonists. This is something that's been long since coming, since Canadians have an unique perspective that's not regularly seen through the usual comic channels. By that same token, I'd also like to see some acknowledgement of old Canadian comics. Their relative obscurity and subject material can make them somewhat of an oddity to people not familiar with childish entertainment, and the pricing and scarity of these items can make seeking them out something of a chore.

Back when Canadian-created content was practically nonexistent, an outreach program was implemented to develop talents that would focus on homegrown material instead of being solely dependent on US-based products. One such result was the creation of Chickadee and Owl magazine, which put an elementary focus on science and nature. Chickadee magazine was for young children not sophisticated enough for Owl magazine. The only reason I stuck around with Chickadee as long as I did was because Chickadee had comics, and Owl didn't.

If not for these comics, I wouldn't have bothered sticking with the children's magazine for as long as I did. But the comics in the back were suspended around 1987, leaving only Daisy Dreamer inside, so I let my subscription lapse because I was craving something with more content. 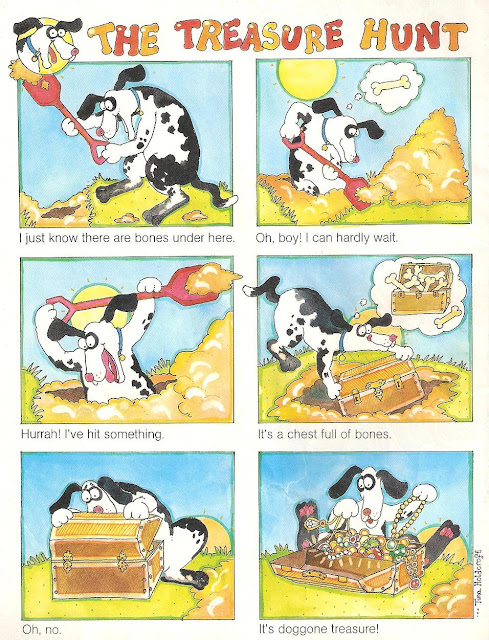 At first in the magazine's early years, the comics in the back were regulated to a one-pager of Henry, baring no resemblance to a certain mute bald-headed kid. 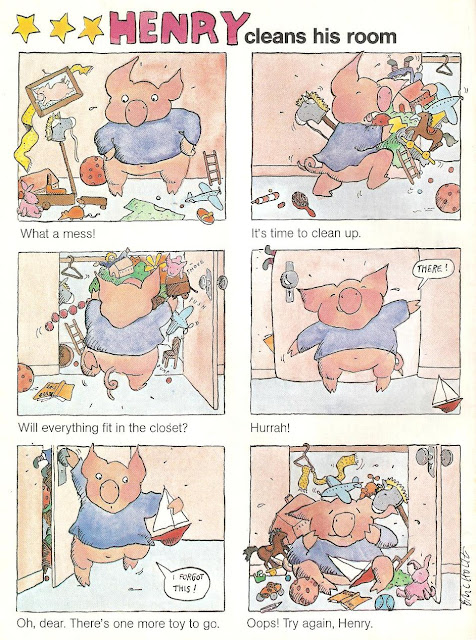 However, it was later switched out for another more cartoony comic by Tina Holdcroft, staring various animals and a different title for each one. Although there were no reoccurring characters, it seemed that mice were the most likely species to show up. 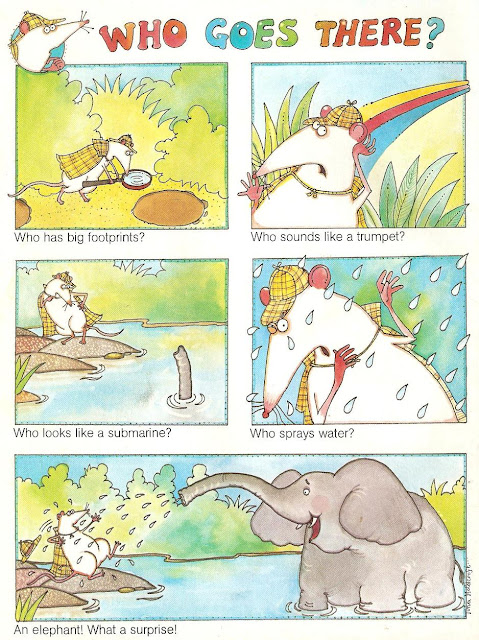 Some of these comics were blatant swipes at well-known children's books, including one that should look familiar to regular readers. 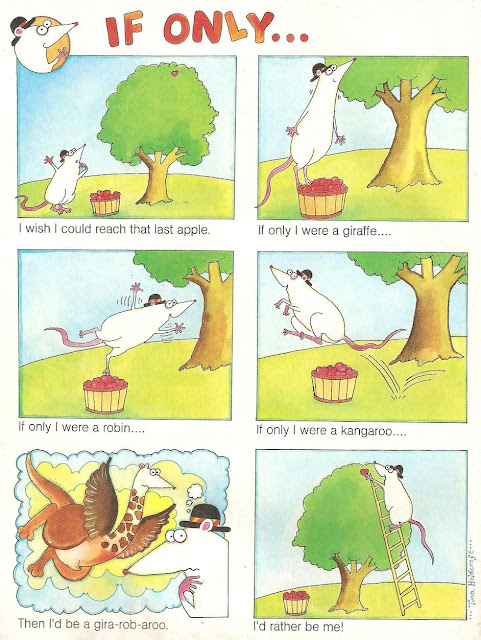 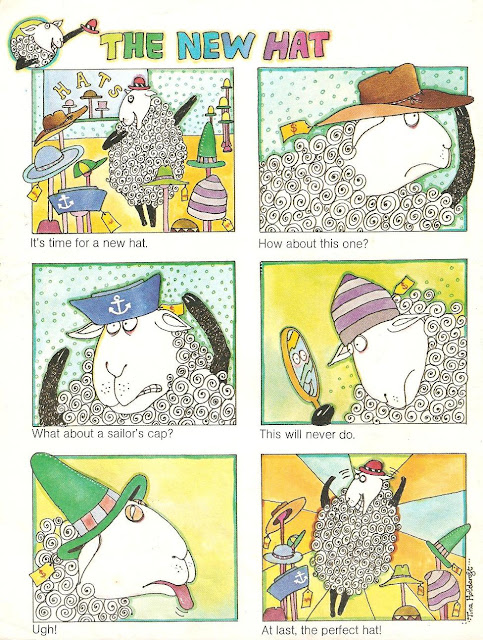 I'm particularly fond of this one below, because of a certain lesson conveyed to me as a child. Back when I was still learning to speak, my mother would constantly remind me to stress my plurals when talking about more than one objects. Annoyed with her constant nagging, I one day pointed to the last panel of this comic and said, 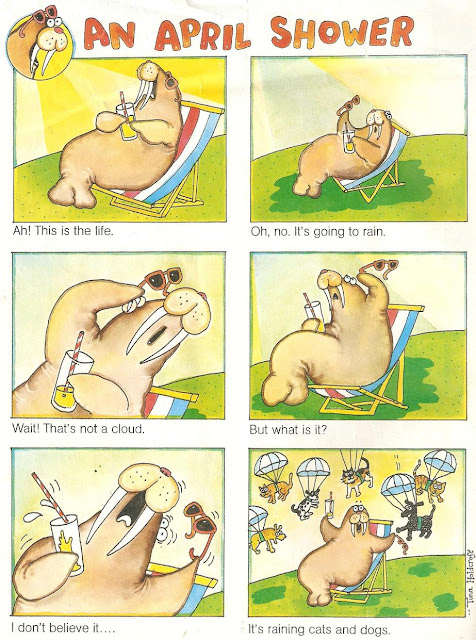 "It's raining CATSSSSSSSS and DOGSSSSSSSSS", in a snarling snake-like voice, if snakes could snarl. Very much like how Odo explained to his adoptive scientist father that he didn't like being constantly poked and prodded with electronic devices to encourage him to change shape, I felt the same way towards my mother. The ensuing reminders may have been mentally annoying, but they certainly got results; and I didn't begin to appreciate this until much later. (I'm pretty sure I still would've held a grudge against her for this cardinal sin) 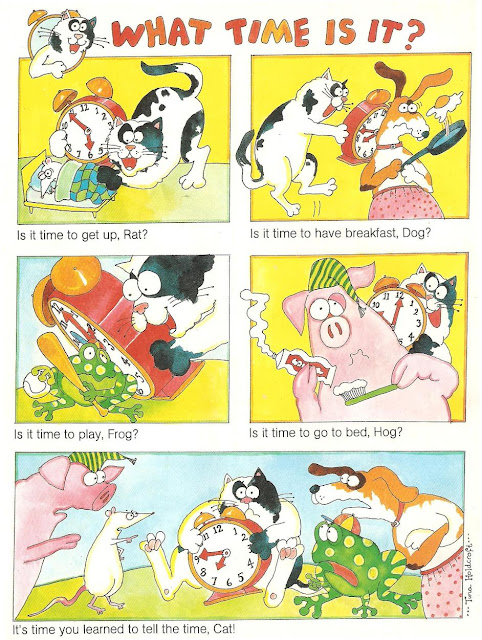 Tina Holdcroft's main comic work was more closely associated with Owl magazine, particularly her illustrations of Dr. Zed, and that's where she presumably lent the majority of her services to. She's still doing drawings to this day.

The second comic feature of Chickadee was Daisy Dreamer, first drawn by Lynda Cooper, and now currently written by Philip Moscovitch and drawn by Gabriel Morrissette. In case the latter name sounds slightly familiar, he's also the co-creator of Angloman. 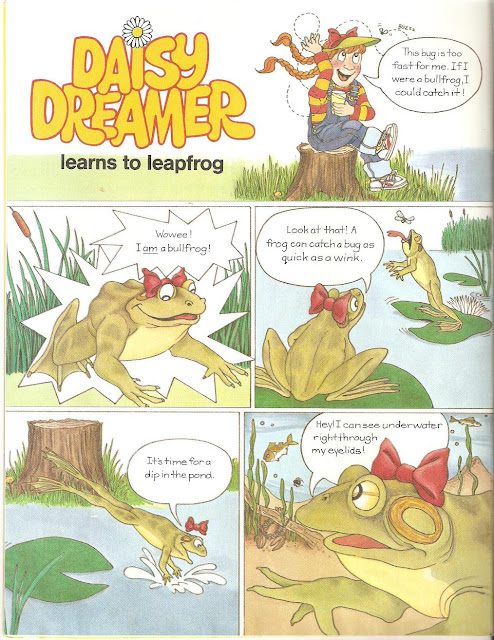 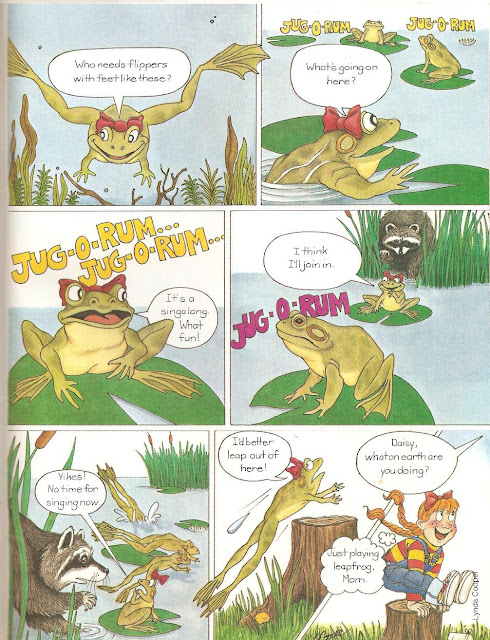 The basic theme of every Daisy Dreamer comic was the same; every issue, the red-haired girl would imagine herself as a different animal. This wasn't just restricted to the usual assortment of cute furry mammals, but also a dizzying array of animals, such as starfish, star mole, moth, bat, hippopotamus, etc, etc. 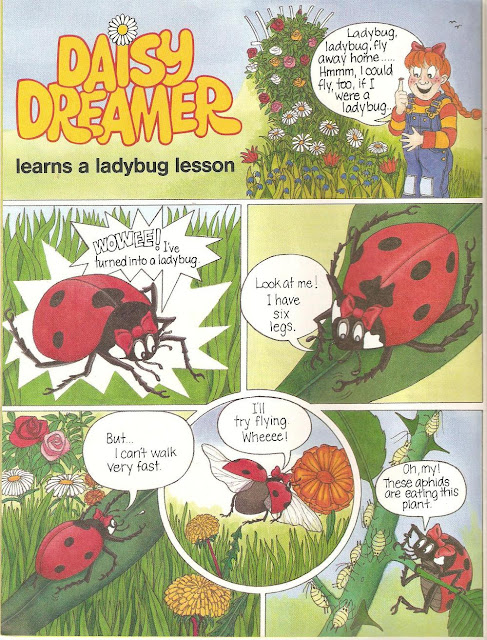 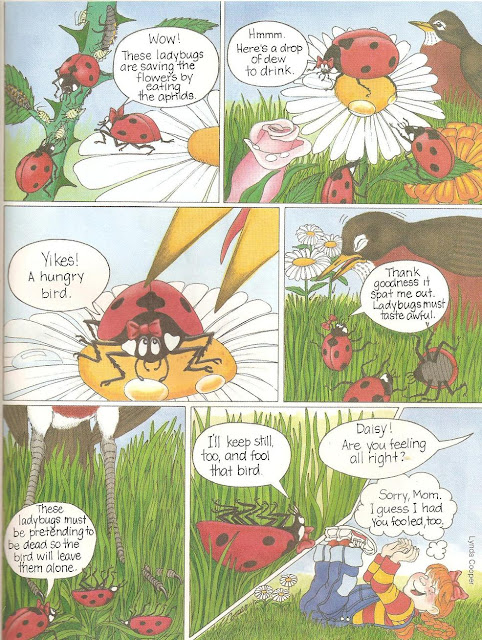 In addition to imagining herself as a different animal each time, she would also deliver basic trivia of each animal involved as well. 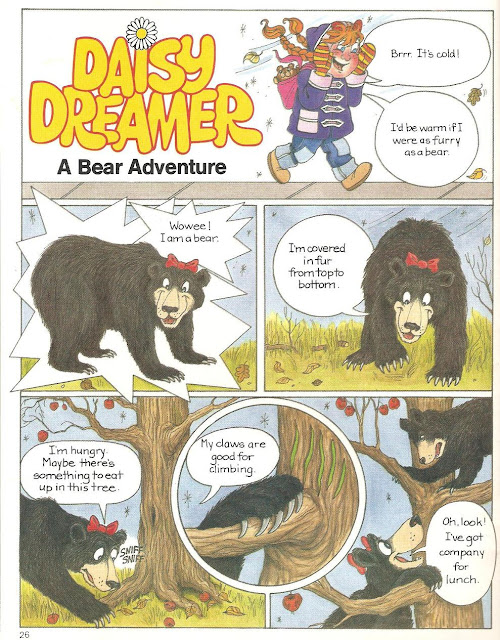 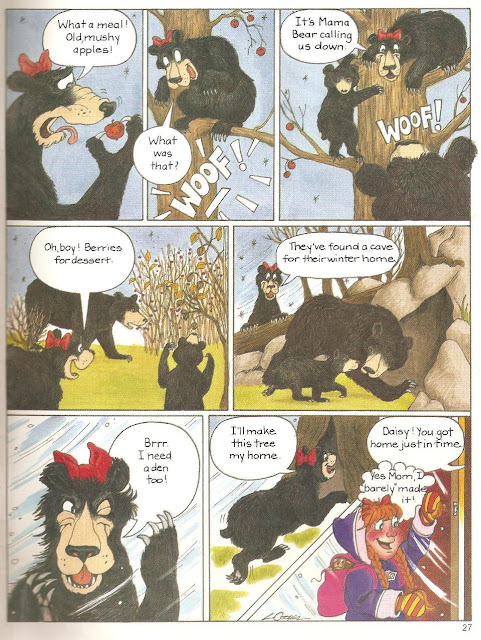 These daydreams always ended on a lesser Little Nemo note of Daisy either snapping out of her dream state by having her animal persona put into a similar situation as her human self, or being interrupted by her perpetually off-screen mother; and usually with some kind of wordplay involved. Though really, the easist way to tell when she's getting out of her daydream is when she reaches the end of the 2nd page. 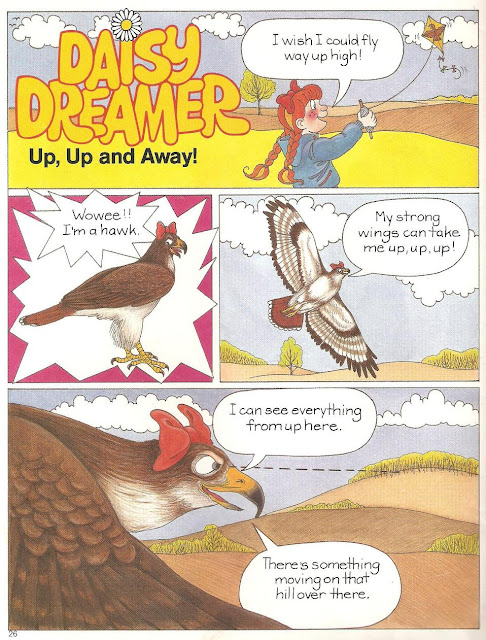 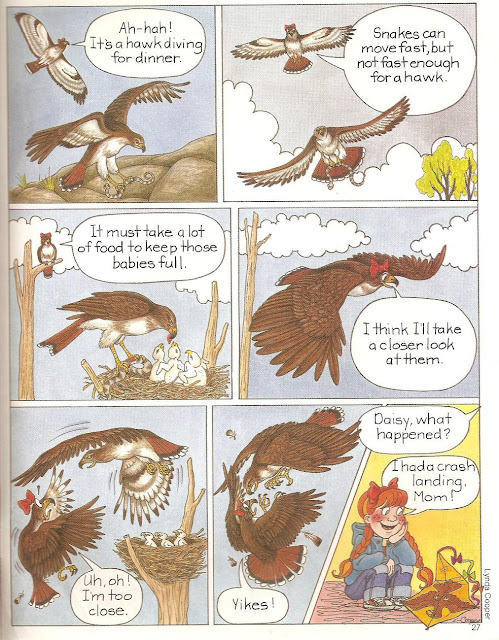 The only distinguishing mark separating Daisy from everyone else is the red bow on her head and large expressive eyes than the other more realistically rendered animals. 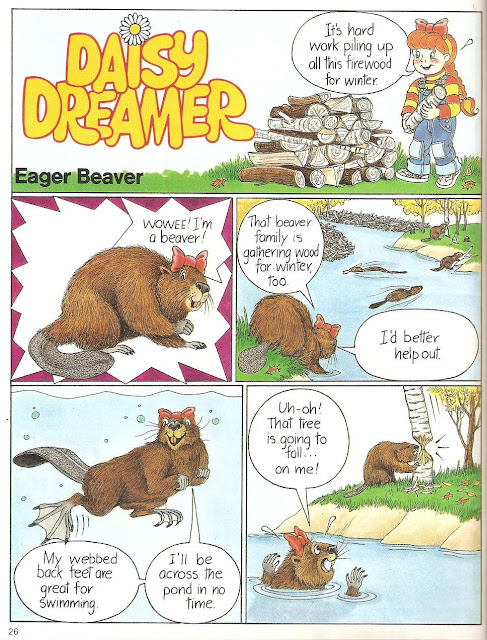 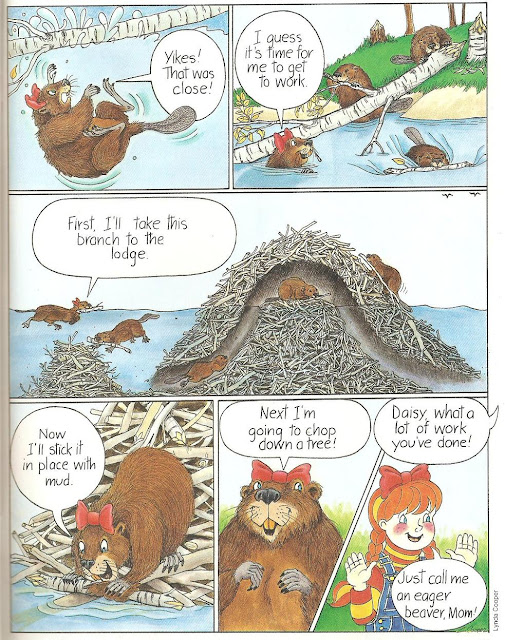 This is probably the only instance where Daisy's starting catchphrase of WOWEE! is completely different. The ironic thing is that just a few months ago, she turned into a turtle and didn't seem as shocked at the prospect. Of course back then, she wasn't exactly in a hurry. 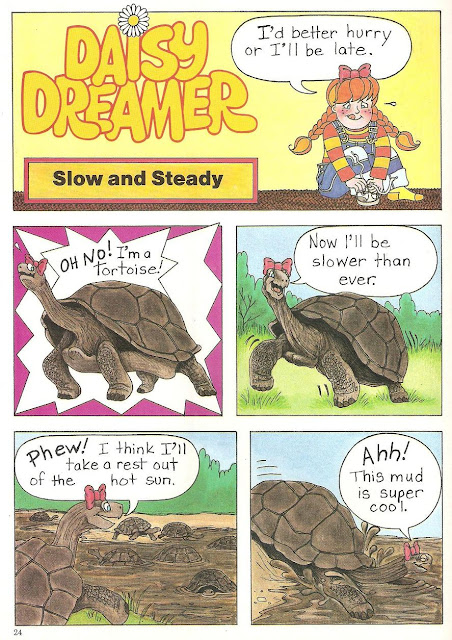 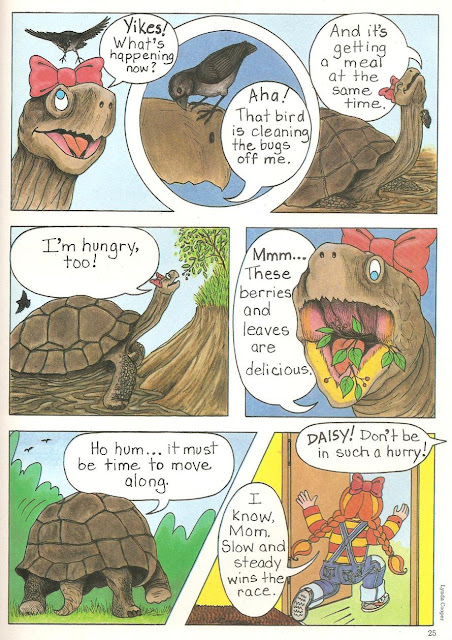 If you've noticed, the character design for the girl is significantly different from when she first appeared; back then, she was more cartoony and wide-eyed. Then she became progressively more grounded and realistic. Things certainly have changed since then. Nowadays, she's somewhat more of an adventurer and instead of transforming to the whims of her imagination, she now changes form thanks to a magical cap. In addition, she's gone from a redhead to a blonde. (Or brown-haired, depending on the colourer) She's certainly changed a lot since her early inception. In fact, it feels more like a page out of Super Friends with the Wonder Twins doing their transformation powers to take care of a perceived threat. Check out this sample and see if you can tell the difference between the two. Heck with that, see if you can find any similarities. Can you believe this is the same girl as the previous pages? 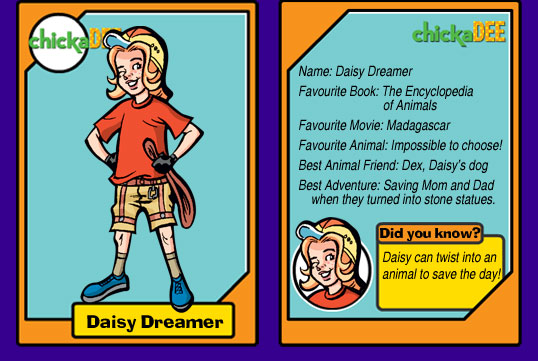 There are no collections of children's magazine comics, and despite their inherent short shelf life, I find it something of a shame. I keep hoping for a collection of Cricket magazine comics, but given the inherent difficulty of their format (a double-page spread at the bottom, continuing with a half-pager in the middle of the magazine, and tapering out with another two-three pages at the bottom), it seems extremely unlikely. Now, it's possible that a compromise could be reached by dividing the low-page comics by splitting them up and combining them into a single page. It's made all the more distressing since the main artist for Cricket magazine was replaced, and I got rid of my copies years ago.

When it comes to magazine collections of comics, the demand for past material simply isn't there. The single exception may be Débrouillards, which I plan to talk about in a future blog entry. 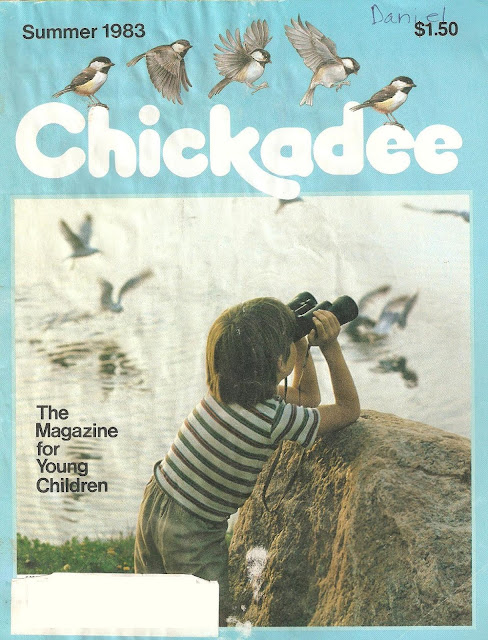