Something that was pointed out in a recent topic on the Foobjournal were various For Better or for Worse comics that were never collected. I was familiar with all of them, save for the throwaway panels in the first comic. However, there were some details of the black & white Sunday comics that were lost when they were reprinted on the FBOFW webpage.

These comics hadn't seen the light of day in years, and I felt it important to show them, since it could take years for them to be released in the latest omnibus collections, and who knows if they'd still retain the spirit of the original. 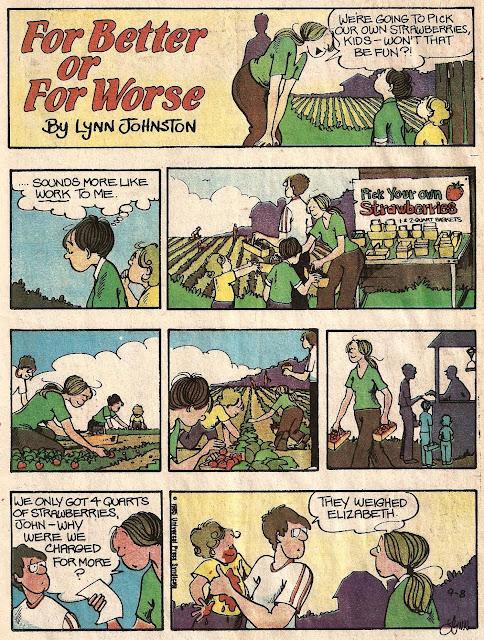 There's not much missing here, since the evidence is clearly shown on Elizabeth's shirt, but the blotches on her face is better emphasized to show just how much fruit she ate.

The second one is more significant, since you can clearly see the effect from Elly's reaction to the salesclerk. She just looks stunned in black & white as opposed to appallingly embarrassed. 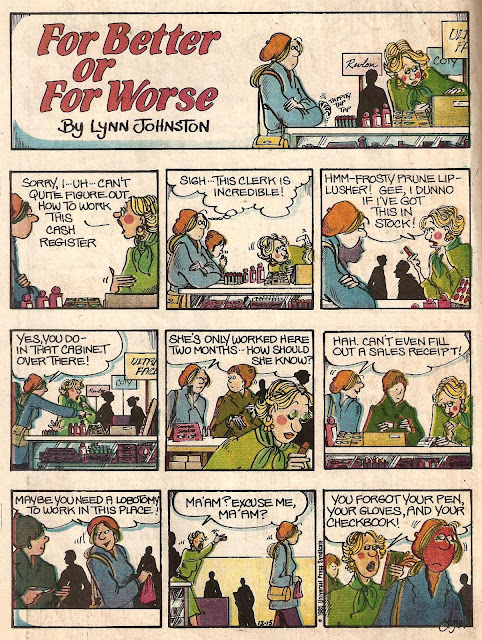 This is weirdly similar to two Fox Trot comics in Eight Yards, Down and Out that had to include an Author's note that several panels for two strips needed to have Jason's face look a pale blue. It's probably just a meaningless coincidence that two cartoonists dealing with family life published two Sunday comics that needed colour to further emphasize the joke; and that said colours were also gender-specific.
Posted by DeBT at 11:04 PM