Five years ago, Johnny Hart died one day shy of the Easter date, which would’ve been a fitting day for him to expire, given how much devotion he paid for Christianity later in life. However, just before the millennium, he created what could be considered his last daring burst of spontaneous creativity before passing onto his mortal coil.

Peter had always made claims of wanting to do conclusive proof that the world was round, but these usually faltered out before they ever started. But in 1999, he finally embarked upon a lengthy trip that would encompass a voyage across the ocean across the continent to the new world.

Sadly, these are the only Saturday daily strips I have available. My paper chose this unfortunate time to replace the daily BC strips with The Boondocks, leaving me to brave browsing the internet for online BC comics for the first time. Upon further hindsight, I really should’ve saved those relevant story strips when they were being run, but I kept procrastinating, convincing that I could “do it anytime I wanted”, and that the archives would be up for eternity. Besides, I wasn’t sure if I wanted to keep them or not. Judging by the quality of the following strips here, the results are decidedly mixed. 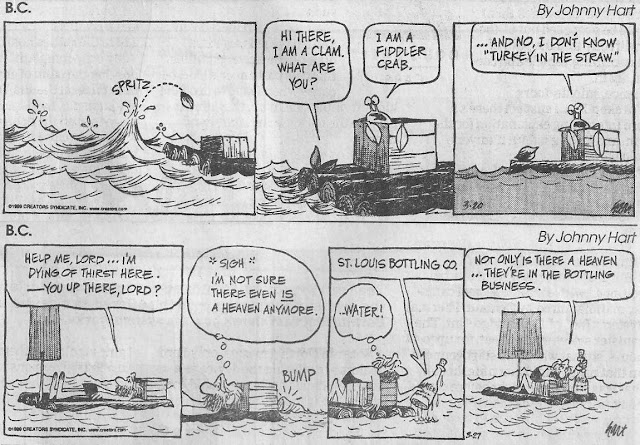 Further adding to the mix was that while life continued on as normal for the rest of the guys, there were various Sundays that were devoted to Peter’s mission. In addition to all these changes, Grog the monosyllabic caveman’s caveman started becoming more articulate and started speaking more than just his name. Unfortunately, these were regulated to the dailies, and weren't integrated into the current Sunday plots, save for a few comics after everything was over.

This was akin to a callback to one of those serial adventures within the confines of a gag-a-day strip that had minor changes happening on a regular basis without the audience noticing until it would be too late for them to complain. And unlike most clean-shaven trailblazing heroes, Peter actually develops some facial hair that extends further than his usual 5 o'clock shadow.

Along his journey, Peter gets caught up in a storm and has a brief encounter with a flying saucer from Mars. Hilarity ensues.

Along the way, Peter makes friends with an octopus who shows up just to serve up bad jokes. Enjoy him while you can - he never shows up again after this.

B.C. asks the all-knowing Guru whether or not he can pinpoint Peter's current location, which could be accurately guessed around "a great honkin' ocean, maybe Atlantic or Pacific."

This is one of the more nonsensical strips, and could be considered "filler", or an advance advertising attempt for The World is Not Enough.

In addition to the hermit crab, the clam, and a brief octupus cameo, Peter also makes friends with an albatross nicknamed Albert Ross. Clearly, Johnny Hart was firing on all cylinders, whether they worked or not.

Sadly, this 2001 alien subplot is passed over for what happens next, which is right out of the pages of Jonah.

Peter's attempts at trying to escape the whale via inventive means are met with less than resounding successes.

After weeks of just loafing around in a whale's intestines, the lord creator (Johnny Hart) apparently decided he'd had enough of nothing happening and decided to spice things up by beaching the whale at the very surface he'd been trying to reach and gets out to see Columbus’ flag flapping on the shore.

Which means that if we’re to take BC’s current navigational skills correctly, all of the gang’s activities have actually been taking place in Europe, rather than the United States, even though most of their anachronisms reference current U.S. activities. Then again, it’s not like BC was ever archeologically correct anyways. In addition, this will also contradict certain revelations to be revealed later.

This story also introduced two new late arrivals to the cast - Italian Anno Domini, (A.D. to Peter’s B.C.) and Indian Conahonty (who looked a lot like Sergio Aragones and Groo for some reason)

Even though Wily didn't receive any news of Peter's success, he still saw the foresight to do a poem about his accomplishments. One suspects that there's an unpublished copy where Peter fell off the face of the Earth. Obviously Wily's playing it safe here.

Somewhere in the midst of Peter's trip around the uncharted territory, he came across a cave leading down a metaphorically long tunnel with a speck of light at the end. This led to a small door, which was part of a larger door, and also graced us with one of the strip’s most self-beloved long-running gags.

From this unapproachable entrance, Peter was able to open a barrier dividing the island from the previously unexplored plot of land. Very much like an "uncrossable checkpoint" in video games that allows for easier shortcuts once you've reached a distant land, flipped a switch on the other side or gotten the right tool for the job. At some point, the rest of the cast were introduced to these people, who lived juuuust around the corner. Surely there would be all kinds of untapped potential with these new people?

Sadly, no. Anno and Conahonty showed up in a few sporadic strips, but never fully integrated with the cast that'd been meshed in the minds of fans for years. Even the latest artists haven't bothered to pick them up, and are just rehashing old jokes without understanding the intent behind them. This extra-long journey ends with one last unanswered question that in the words of Futurama “only raises more questions than it answers”.

It’s unknown if any cartoonists out there might feel like doing some creative works before the Mayan calendar ends, but if there are any, they should take the opportunity to produce some work before its too late.