In today's Blondie, Dagwood was notably shocked when he saw Blondie’s new hairdo. This is also a typical reaction of the average newspaper reader when they see new radical changes to their beloved characters. Actually, this isn’t just limited to newspaper readers, but pretty much any long-term readers of a popular francise that’s been running for a long time, and has changed hands from the original creator to other successors. Either they carry on the spirit of the original, or they risk alienating their audience. 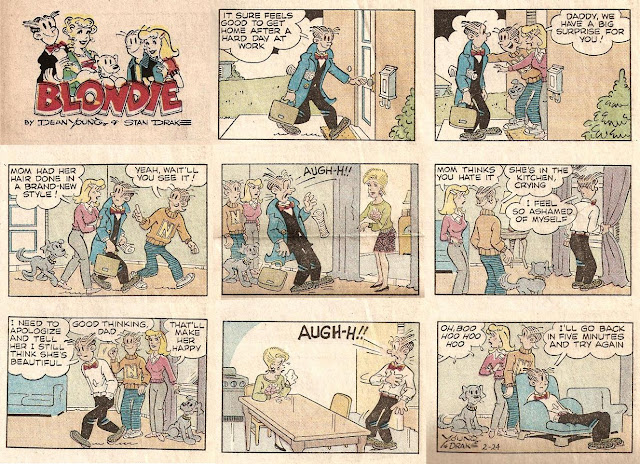 Actually, this sudden hairstyle change isn’t that unusual. The previous iteration of this joke by Dean Young and John Marshal was done with another hairstyle by Dean Young and Stan Drake. Obviously enough time passed between artists that the writer felt confident enough to make some slight alternations to the script to have a similar outcome. Personally, I find John Marshal to be rather stiff in his poses compared to previous artists.

But wait! The very same punchline was used for a different comic done by Dean Young and Mike Gersher. Only this time, it was Dagwood who introduced a new element, and Blondie who was reacting to the change. This longer comic also does something that the later variations failed in - giving the reactors time to respond and consider their responses and try to change their behaviour accordingly, and failing in doing so. 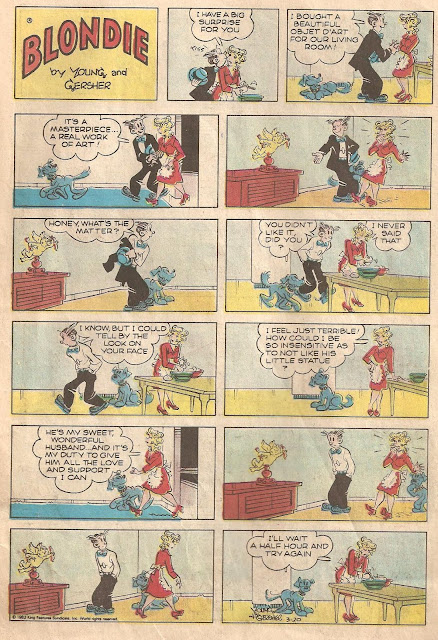