You wouldn't think of Shoe having much romantic interest, since there's a generally all-male cast, with the exception of Roz the waitress and Shoe's secretary, Muffy Hollandaise. The former is efficient, but harried and unattractive, and the latter's such a minor character who hardly showed up or had much presence, and has been mostly forgotten by now. However, there was a reoccurring theme that was returned to at various intervals at Skyler's school - his infatuation with a certain Mary Beth. 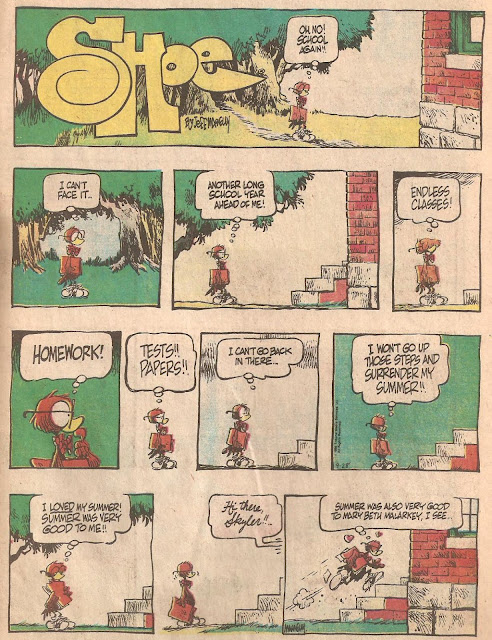 For most of her appearances, she was often regulated to being an offscreen presence, much like the Red-Haired girl in Peanuts. In addition, she appeared to be much more competent and smarter than the nerdy bird, making her something more of a unconquerable rival than a potential soulmate. No matter what Skyler would do, Mary Beth would do better.

Further confounding the issue are two other Marys who were briefly mentioned and quickly forgotten - Mary Beth Lederman (who was just Mary Beth Malarkey offscreen) and Mary Lou Fencepost who was also a cheerleader, though a more intimidating one. Until I checked their last names, I thought they were the same person, and had undergone a serious weight-loss program. 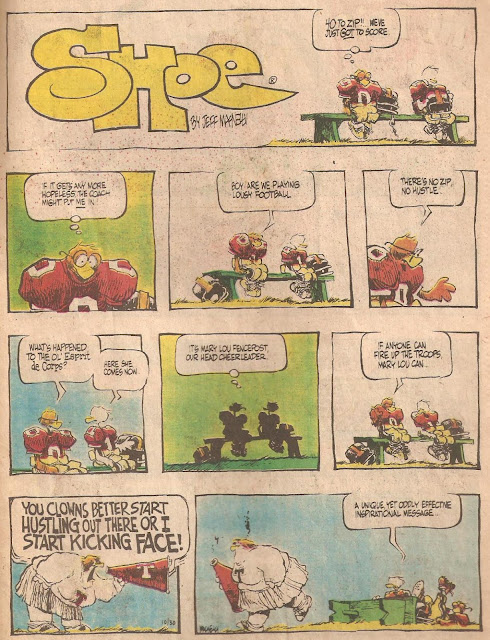 Whatever the reason, Jeff MacNelly continued to return to the Mary Beth name, until he felt comfortable with the Malarkey surname. Presumably because it referenced the most famous Pogo caricature of all time. 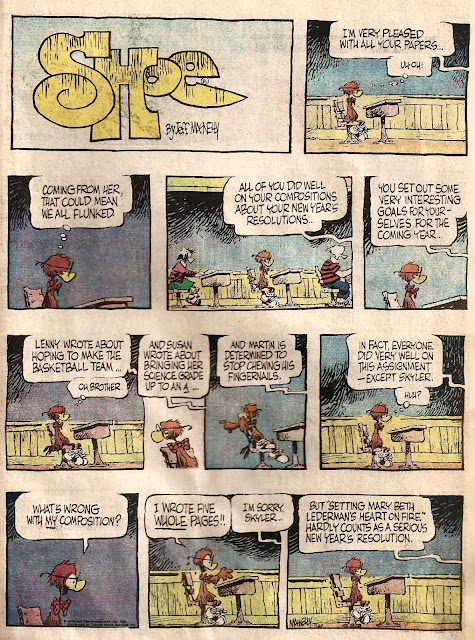 Skyler's most frequent encounters with Mary Beth were during Football games, which went as well as you would expect. While the general formula in Sports Manga is "small & cute will always win over big & ugly", that outlook doesn't work out as well in America given Skyler's obvious handicaps. His small size made him an eternal underdog in the face of the oppressive force of the opposing team (and fellow teammates), yet he always somehow wound up in a crucial position in these group sports. 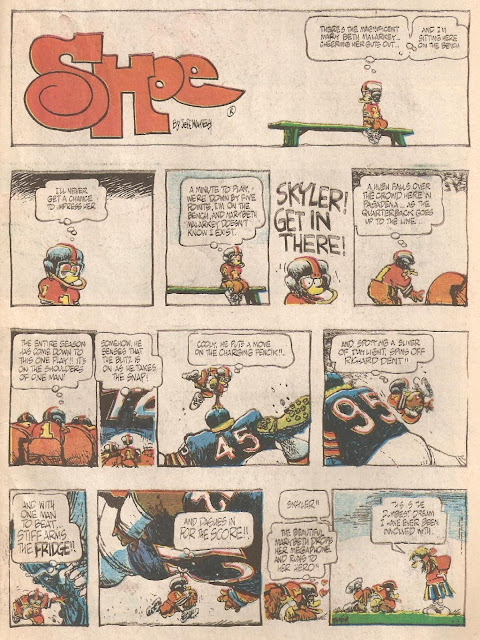 In another Peanuts parallel, he was regularly the baseball pitcher, with Charlie Brown's equal success rate. One wonders why any team would bother having Skyler there, let alone why he would join in the first place, since intellect is more his forte. I suspect he was being coerced into these things, which thanks to the abolishing of Gym class in schools nowadays, has become something less of an identification issue, and helped increase obesity, which could play a part in Perfessor Cosmo Fishhawk's increased current presence to an aging audience. (How often has Skyler appeared in the current Shoe strips since Jeff MacNelly died?) 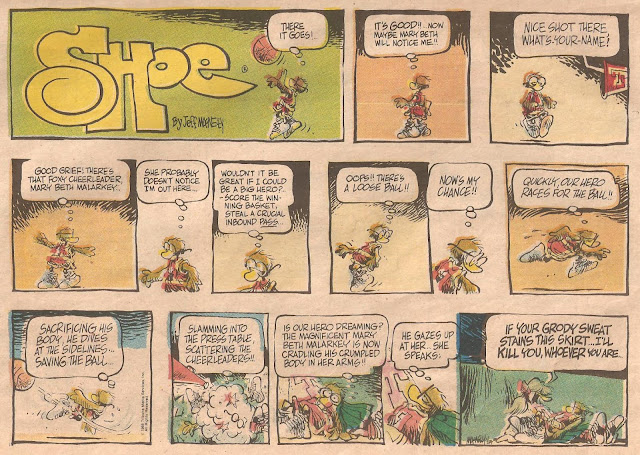 For the most part, Mary Beth Malarkey seems to be totally oblivious to Skyler's affections in her, save for when the little skylark indulges in one of his fantasies. They're not quite as outlandish as Calvin's, and they're more sports-related than usual, but they're certainly no less divided than any dream of a young athlete doing his best to impress the girl. Only problem is, her portrayal is all over the map. She's affectionate in one strip, then totally dismissive in another. This inconsistency may explain why it's not a reciprocal relationship and more of a crush than anything else .

(Minor note - until I started watching Breaking Bad, I had no idea that Skyler was a gender-neutral name)
Posted by DeBT at 9:46 AM