Thanks to Irrelevant Comics, I've just found out about another comics-related tumbler theme - a collection of drawn women in awkward positions that simultaneously emphasizes their busts and rears. (I'm too polite to use the more descriptive terms of T&A) These are dozens of perfectly-toned women in awkward action (or still) panels that'd look more at place in comic porn magazines, but since such business models are frowned upon, frustrated artists are left venting their sexual frustrations on the S-hero page where they'd get a respectable paycheck. Certainly, their artistic style of choice has lent their fair share of criticism. Amazingly enough, they haven't touched on Greg Land yet, who was well known for blatantly plagiarizing his artwork from softcore images such as Sports Illustrated and Maxim. EDIT - somebody just posted a lengthy rant about Greg Land's sins shortly after I brought it up that's worth reading.

While it'd probably be more enjoyed for the cheesecake factor, there's a stronger impetus that's left unexplored here. Namely that there are impressible young girls growing up who'd have the impression that these kind of positions are mandatory in everyday life. If you don't look like a Goddess, then you must be doing something wrong. Hence the popularity of page-turners such as the Uglies trilogy by Scott Westerfeld. I was reminded of a relevant comic titled The Bellybuttons (Les Nombrils), named so because of the way the girls reveal their navels. 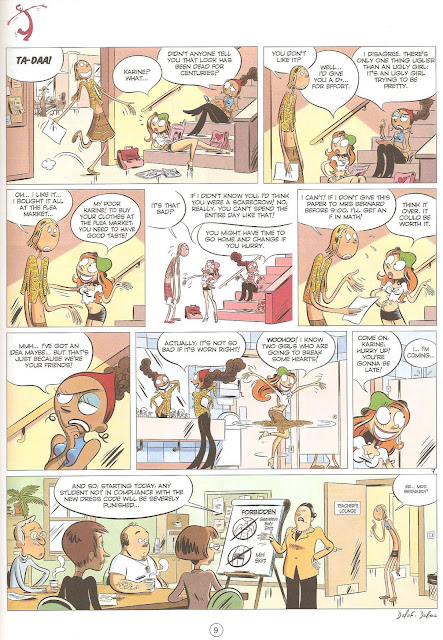 Despite it's typical European BD style, it's actually a Canadian French comic by a husband/wife team that originally ran in the comic satire magazine Safarir (the closest French equivalent to MAD after Croc folded). I was surprised when I saw that pages were printed in Spirou magazine, and wondered how Safarir got the rights to show it without worrying about copyright infringement. Apparently Canadians are very low-key about our own popular products that we ship overseas. You'd think this kind of thing would be more widely acclaimed. 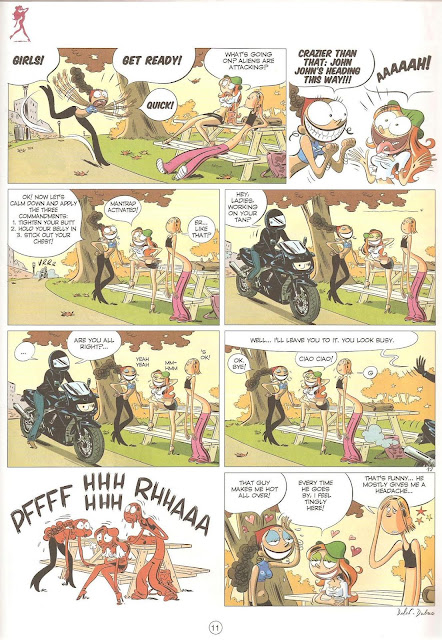 It's brutal honesty of High School social life makes it one of the cruelest comics I've ever read. Karine is the nicest girl in the group, and the other two girls, Jenny and Vicky, never pass up a chance to put her down, or try to steal away the only guy who seems interested in her. While it looks like that the two bullies would prefer their own company to a typically unattractive girl, they can't stand their own company among themselves unless they have somebody else to tease. 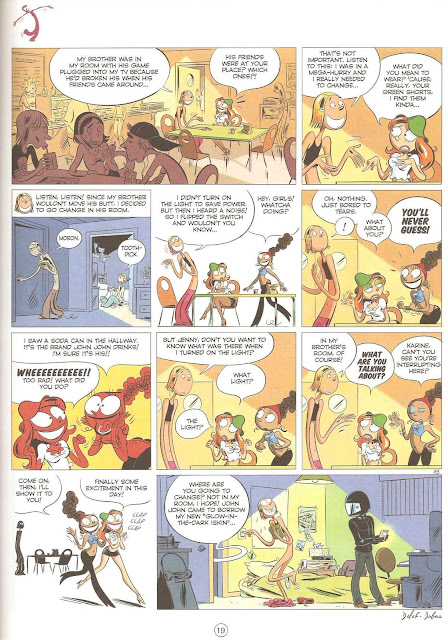 I'm sure you've noticed by now that the two Alpha females make a habit of intentionally putting themselves into compromising positions. They pose like this ALL THE TIME, even when nobody's looking. Check out this sequence where the girls get up in the morning. 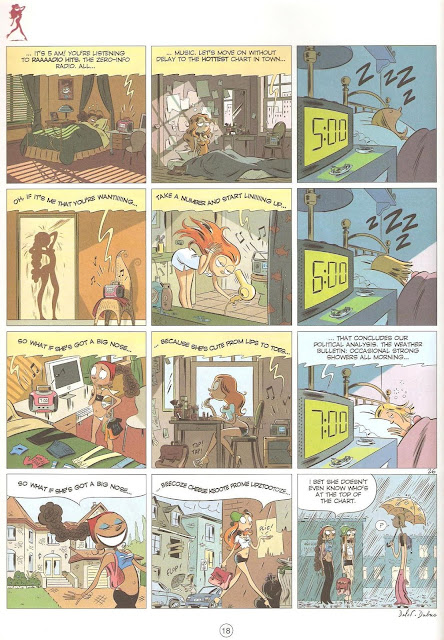 Despite the other two being scantly clad and revealing tons of leg and cleavage whenever they get the chance (and it being drawn by a man, no less), they're actually less sexually titillating than you'd expect. Mostly because of their overall dismissive attitude towards anyone who isn't perceived as "cool", which is pretty much anybody who isn't an immediate hunk. In this case, having someone described as "having a great personality" would work in their favour. 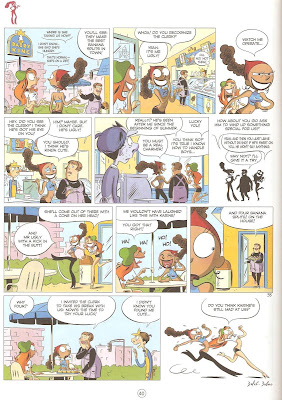 While the first volume feels like a one-sided assault against Karine, the second volumes and up do a better job of fleshing out the other two girls. Jenny comes from a destitute broken home, while Vicky has a rich sister who constantly downplays every decision she makes. It may not excuse their behavior, but it certainly helps explain it. If it makes things any easier, in the lost recent comics, Karine manages to reinvent her body image while still maintaining her beanpole figure. (Yes, that brunette in the middle is the same girl) 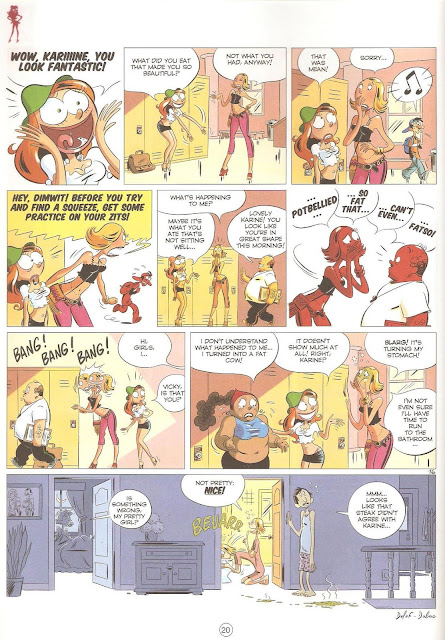