The latest collection of PapercutZ's Smurfs has been released, and it's been awhile since I complained about the last one, so they're due for another round of nit-picking. The 9th book The Return of the Smurfette is a mixture of short stories featuring the Smurfette in minor roles and one-page gags that were part of an album-length collection. Rather than focus on the translation issues, I'd rather focus on the titles for the one-page jokes.

When I saw the first set of Smurfette stories, I was dismayed to see that they left out the descriptive 'Smurf' titles above the comics. I found this strange because a single page joke was shown in a previous book (The Smurfs and the Howlibird), and THAT one had a title above it. 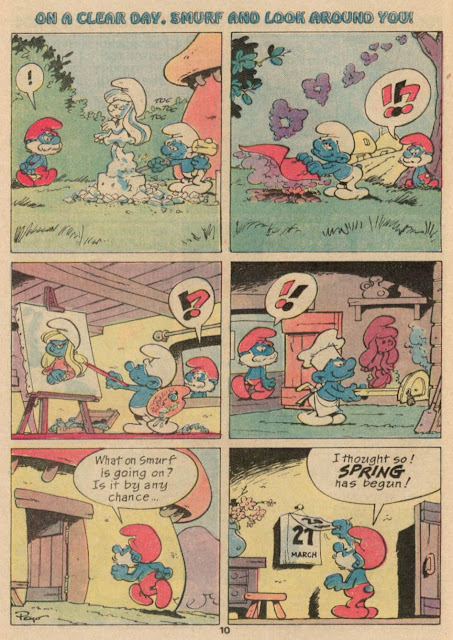 These scans are taken from Marvel's limited 3-issue comic run, back when they were still remotely interested in producing material aimed at children. Half of a typical issue were slimmed-down single-page jokes, while the other half was attempts at doing crude imitations as drawn by Dan Decarlo (yes, THAT Dan Decarlo). Somewhat appropriate for the man who worked on Homer the Happy Ghost. If only there were taller and leggier versions of the Smurfette, he might've stood a chance.

Dan Decarlo may have been a prolific cartoonist, but he was no Peyo. His attempts at the off-model Smurfs wouldn't even earn him a job for a ghost artist for Studio Peyo. To further add insult to injury, the cover page and the interior title panel were the same image, only reversed. If you've ever wondered why so many Manga artists were reluctant to release their works over unless they were left unflipped, you'll notice a certain artistic shift. Certain mistakes become glaringly obvious when they're mirrored. 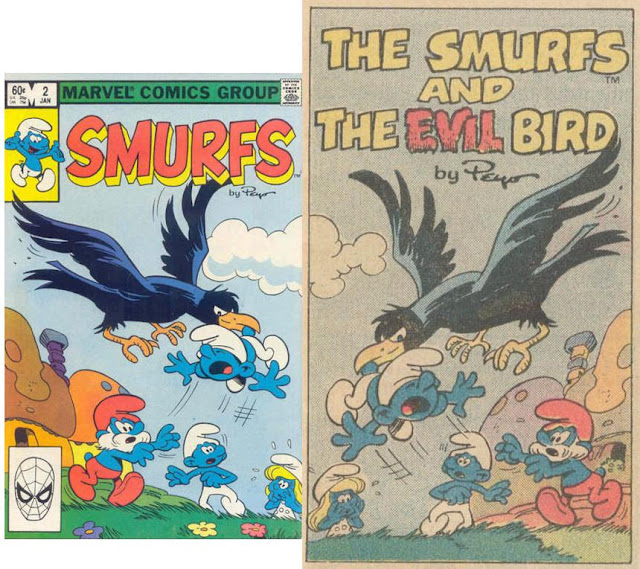 But the real crime was taking the original Smurf material and cutting them up. To make the comic more condensed, they moved some panels around, and in some cases, compressed them. As a result, a lot of the pacing and timing leading up to the finale was lost. It was as if Marvel thought their audience wouldn't be able to appreciate the European model of four layers of panels instead of the traditional three. 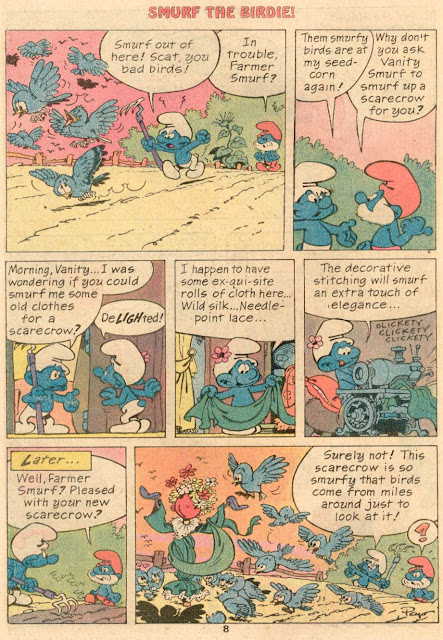 As an example of the Animated series toning down the violence, they left out Farmer Smurf kicking away the scarecrow, and Grumpy Smurf being cropped out of the admiring crowd. 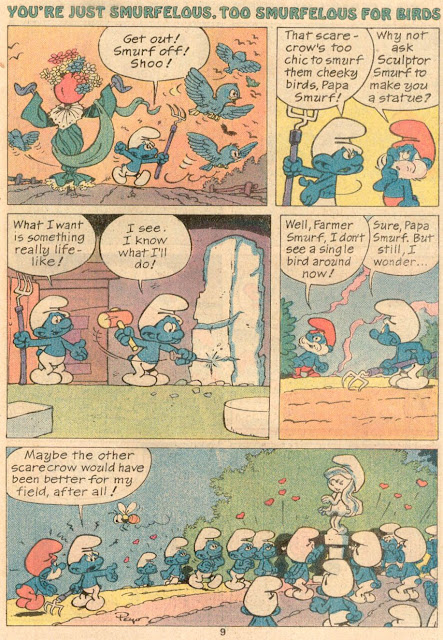 I don't recommend reading the Marvel issues other than as a historical curiosity to see just how badly they mangled their attempts at mimicing the Smurf property. If you insist on indulging in visual sadomasochism, I suggest the oversized Smurfs Treasury, where you can enjoy all three issues with a wraparound cover that's more attractive than the interior. If you don't mind chopped up and pasted comics and bootleg-style drawings heavily scribbled from the plots of the TV series, this is the kind of product for you!

To further confound the issue, while the majority of the main feature of single-page jokes in the PapercutZ version had no titles, the remainder of non-Smurfette-related jokes had titles on them. In this case, Marvel put some more effort and imagination with these titles, though they didn't have to try too hard. One exception was this, which was titled "More Romeos and Smurfette", which was a blanket statement for a few more Smurfette-related comics. 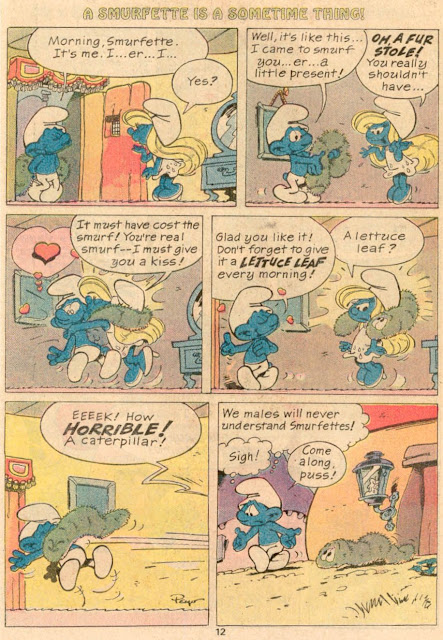 Also, a minor tip - when the nameless Smurf is engaged in rising emphasis on getting dismal fortunes, the cries of dismay should become increasingly larger, not large and then medium in comparison. 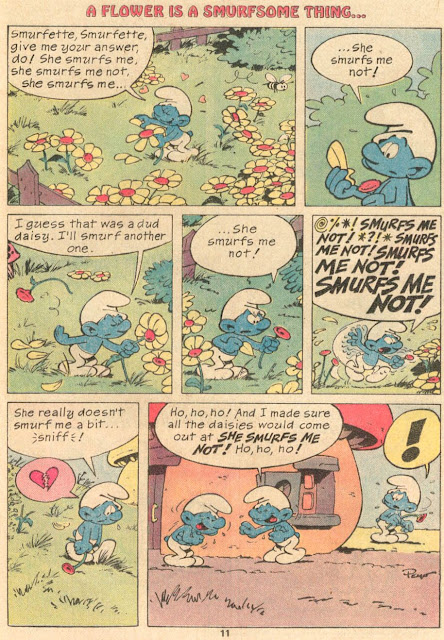 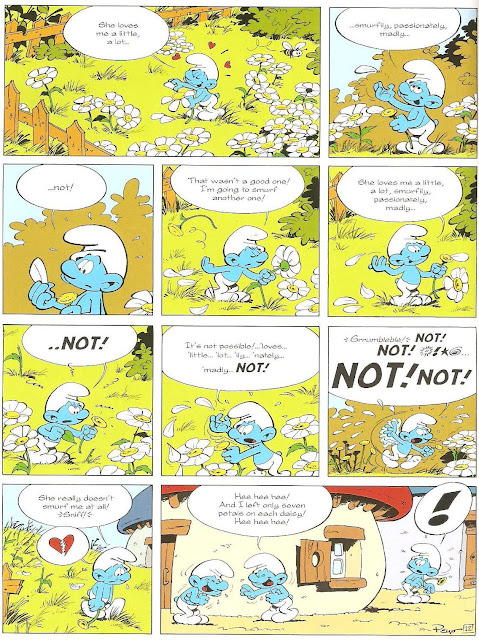 "There are none so Smurf as those who will not Smurf" In a rare case, I actually prefer the new translation to the older version. 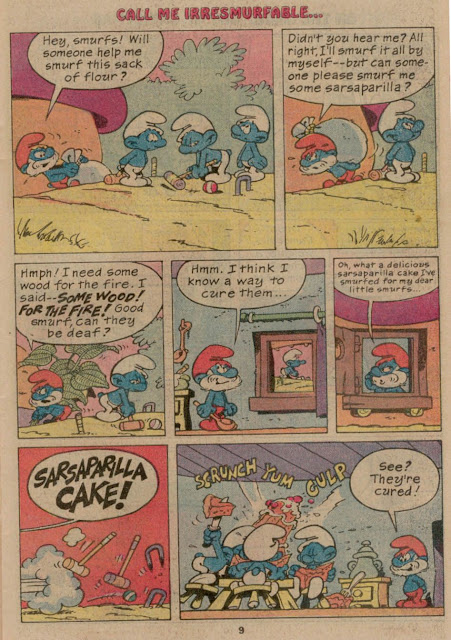 This is another too literal translation. "Whatever is well-Concieved can be clearly explained." I much more prefer the simpler title here: 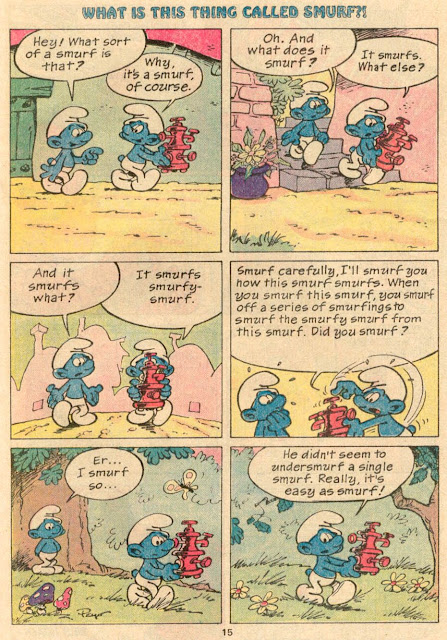 "Strike the Smurf while its still Smurf" The title for the below one comes from an unpopular Beetles song (but popular Newgrounds animated video), the Maxwell Edison Story. 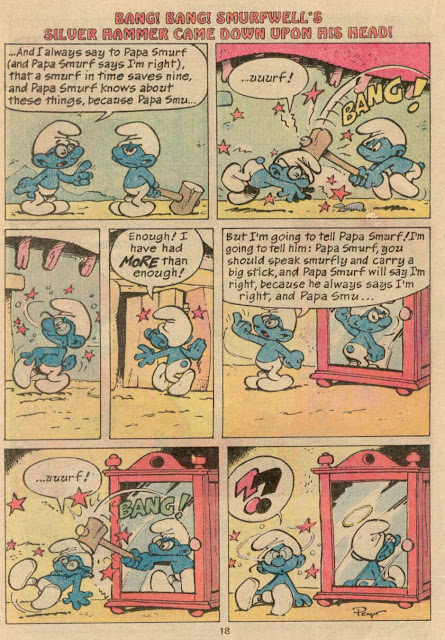 Unlike the TV show that replaced taking a hammer to Brainy Smurf's head with him getting thrown out of the village whenever he got too annoying (which was often), it seems to have been left intact in this case. One wonders why this was left mostly intact, when it could've simply been skipped over, and what an innoculous kid who enjoyed the show must've thought when seeing the insufferable genius getting a well-deserved beatdown.

Also, if anybody knows the original blog that posted this example of an earlier version that allowed the presentation of a Black Smurf, let me know so I can give a proper link. 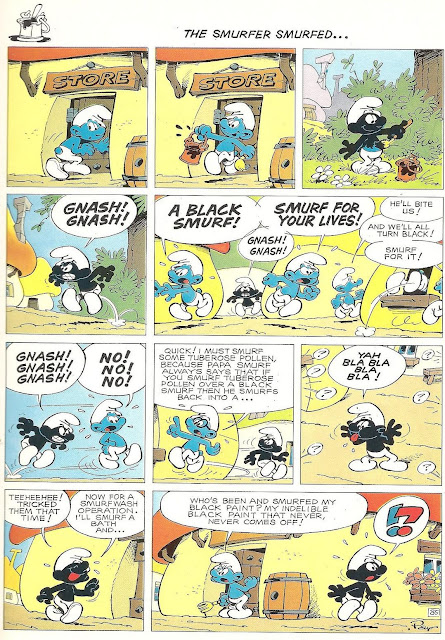 Oh, and this was retitled, There's no Smurfcounting For Taste, which is certainly better.
Posted by DeBT at 9:58 AM