Recently, Kevin Keller, the Gay teenage army brat's just gottenly married to a medical doctor.
I have to admit that I'm surprised that he's managed to last this long. Usually, most new characters who're introduced into the Archie universe make a strong debut, then their appearances taper off until they fade away. Such as Jughead's baby sister, Jellybean.

Obviously Kevin must be filling a niche audience that hadn't existed before. Otherwise, Archie comics wouldn't have gone to the trouble of producing his own title. With the exception of a few minor complaints from conservatives, the overall reception has been surprisingly positive. (Though some feel that he's too vanilla a personality, but in the world of Archie, that's practically a given)

Kevin's lucky enough to have maintained his popularity. Most others aren't as fortunate to stay on as long as he has. A list of some minor characters who weren't strong enough to have enduring roles can be found here. This Sunday comic is a rare occurance for showing three of them who were prevalent at the time: Anita Chavita, Aerobic Liz and Crystal the New Age Girl. Remember any of them? Yeah, me neither. 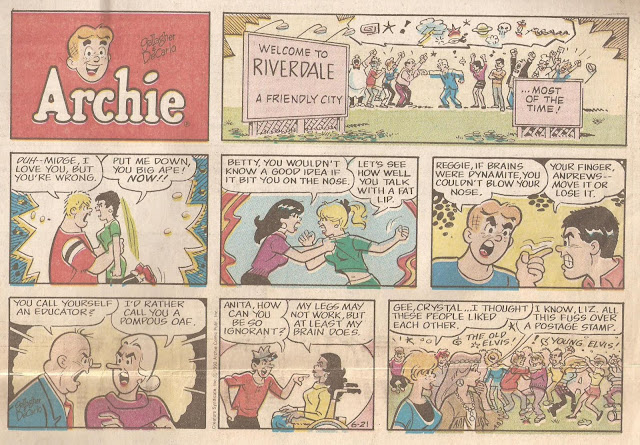 From what I can tell, they're arguing over a certain Elvis stamp, and whether he should've been portrayed as the young rock star or the bloated parody he later became known for. For comparison, it's reminiscent of fans crying foul over which portrayal of Michael Jackson is the TRUE Jackson. Since the manchild changed appearances constantly, your preferences would be left up to chance.

Mrs. Hagley is probably the closest the faculty has to a senile teacher. She's also possibly older than Mrs. Grundy, which is quite an accomplishment in itself. 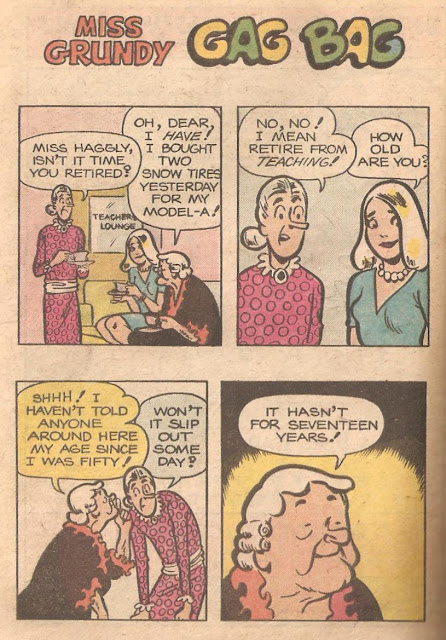 As a result, she's not used very much, and Mrs. Grundy's mostly taken over her role, which is a shame, since the woman doesn't have too many friends her own age. Mr. Weatherbee doesn't exactly count, since he's effectively her boss, and she can hardly complain about upper management to him. 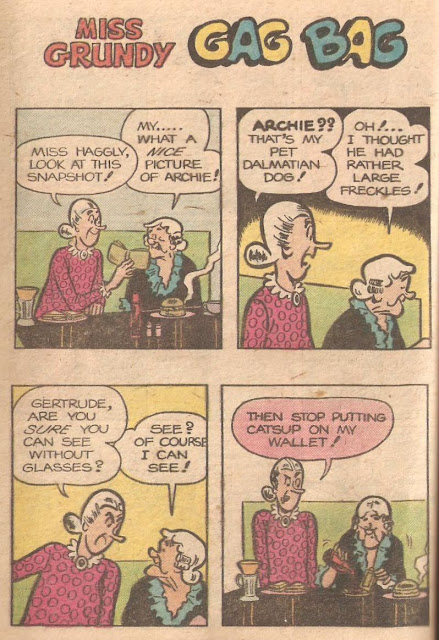 Then there's Mr. Krosskut (AKA Mr. Wood) whose appearances are so rare I've only seen him twice. If his name hadn't been mentioned here, I wouldn't have known what he was called. (For the record, he's misspelled with one 's' in the minor character list) 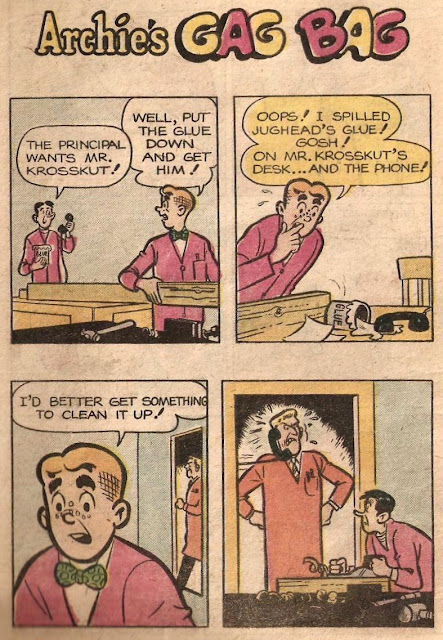 From what little I've seen of him, he handles the woodshop class, and much like Ted Danson from Damages, "looks like Frankenstein". 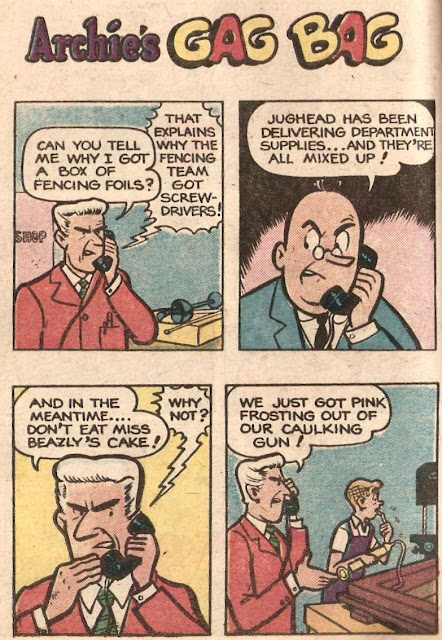 Frobisher... I mean Mr. Krosskut's not the only scary stone-faced adult on the staff. There was also Patton Howitzer, the ex-army drill sergeant who was the temporary substitute Principal when Mr. Weatherbee was incapacitated, and was so strict in comparision that practically everybody wanted the old Principal back. Weatherbee eventually got better, but Howitzer stayed on, filling the Vice-Principal role, where all the tough decisions could be made without anybody daring to give a contrary opinion. 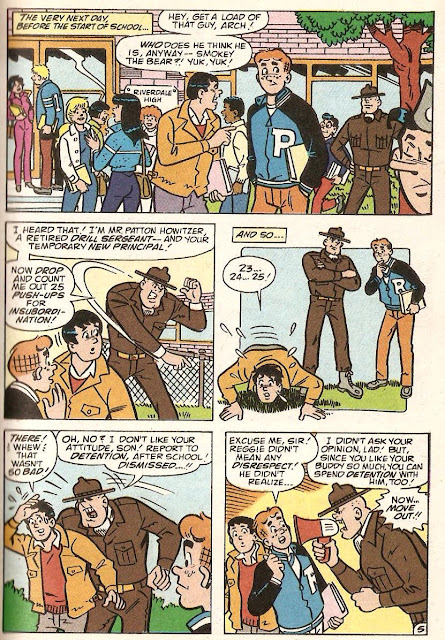 Mr. Grimley was one of the more enjoyable and intriguing new additions to the faculty, since he would often interview the students of Riverdale High on their plans for the future, leading to bouts of arguing with their career plans and coping with his failing ulcer. One of his first sessions was with Betty Cooper, and we all know what a paragon of virtue she is. 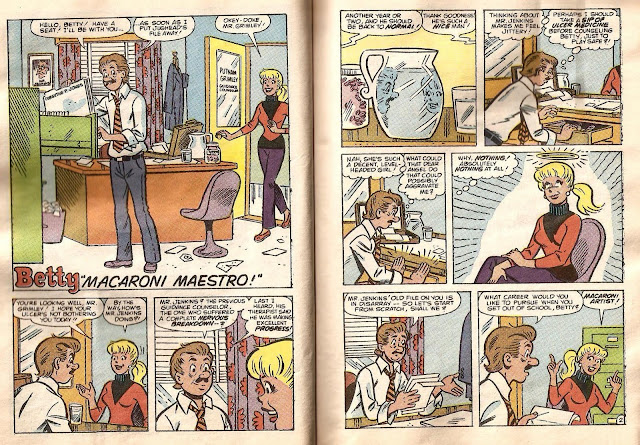 Run. Run far away and never look back. 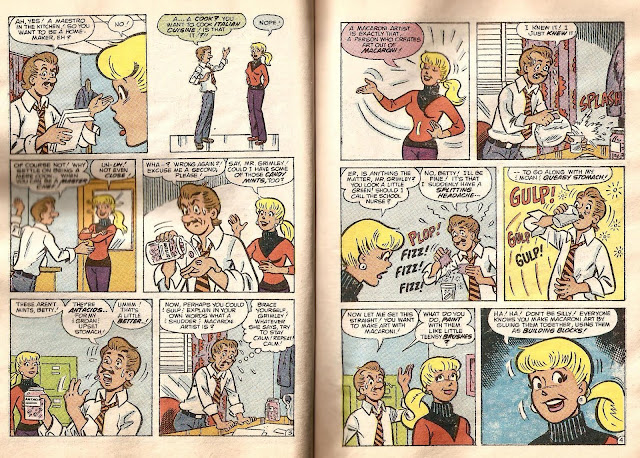 In the entire man's career, I think there was maybe ONE student who didn't leave him with a hole in his stomach. My memory's a little rusty, but I think it might've been Dilton Doiley. The session started out like any other typical meeting with the man feeling the pangs of pain and a sudden craving for his favorite Pepsi-Bismol, but eventually lessened when he explained the rationale behind his forward-thinking thoughts. In the end, he wound up making a lot of sense, and actually made Mr. Grimley feel better about himself. 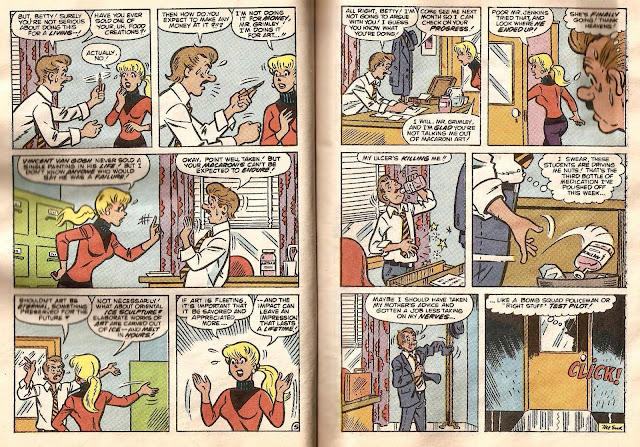 Later issues would have him engaging in driving lessons, which was no less therapeutic in comparison. One such lesson had him driving an actual tank Mr. Howitzer drove over for a national celebration.

Myself, I welcome the day when the sexual orientation of a comic character isn't a defining element. The real test of Kevin Keller's legacy will be when his stories are available in a digest without commentary, since that's where the typical reader is likely to read from their collection of Archie stories.
Posted by DeBT at 3:18 PM