Hostess with the Mostess

Just recently got news that Hostess, best known for the overly offbeat Ads that were prevalent in comic books is going to file for bankruptcy. Next to the Beach Bully, Sea Monkeys and X-Ray goggles, they were the most known (and parodied) element in comics. It's the end of an era where ubiquitous comic advertising was something targeted towards children (which they were). Nowadays, the latest ads are more likely to contain sublimal information towards buying computers, cars and other appliances that're likely to be a little beyond the child's interests and price range. (Unless they nag their parents to buy them, and they share similar interests)

The ads may have been maligned in their time, but there's no doubt there's some fond memories of their widespread attempt at convincing people that these were really Fruity Delights in Every Bite! These things were literal MacGuffins / Deus ex Machinas / Chekhov's Guns. There was no problem so unsurmountable (or inexplicable) that couldn't be solved with the application of a carefully placed or thrown Moon Pie wrapped in thin plastic. Need to acquire some immense valuables of indeterminable worth? Hostess Fruit Pies! Need to stop rampaging mechanical rhinoceroses impervious to weapons fire? Hostess Fruit Pies! Need to stop Osama Bin Laden? Hostess Fruit Pies! (Okay, that last one's a parody, and more recently redundant, but still)

People may laugh at Hostess' childlishly obvious attempts at advertising, but their ability to tell (and sell) a complete product and story in a single page resonated strongly with the general population. A website's even gone through the trouble of making a business of selling copies of the advertisements, though the quality of the samples is quite low. (Which makes sense, since they'd hardly want to let browsers download and print the pictures themselves) Think about that for a moment - they're selling old advertisements of a product, rather than the actual product itself. That's how popular they are. Never underestimate the appeal for nostalgia. 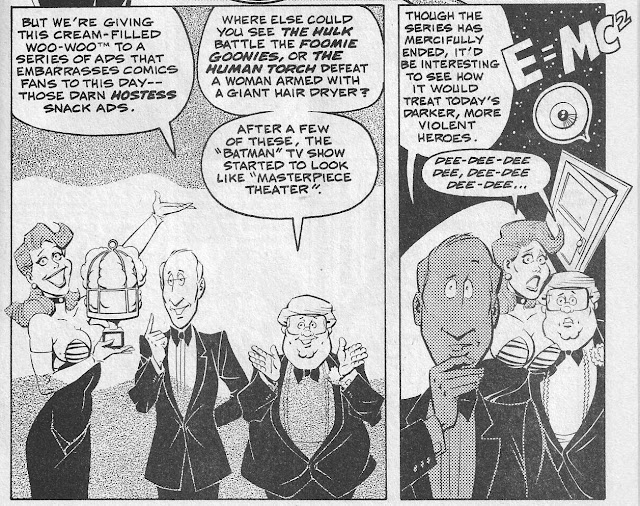 I could've easily fallen for their product placement if any of said Hostess twinkies were available in any of the stores I shopped around, but since these were American sweets not available where I lived, I didn't fall prey to this kind of marketing. I certainly wasn't going to order out for some expensive cake snacks with shipping charges when I had perfectly good alternatives elsewhere. They also would've been more effective if I'd seen any of these ads in any comic digests, rather than the comic books they were more likely to be seen in. I think I maybe saw the infamous Spider-Man Vs. Chairman comic in an issue of Electric Company.

Seanbaby has a collection of his scathing takes of has all the examples found in S-hero comics, though there are several oddities found in other children's comics such as Archie and Richie Rich that aren't as fondly remembered. Probably because they weren't too different from what could actually happen in their pages. In other words, children's comics were filled with the kind of inherent weirdness that wouldn't look out of place there, while S-hero comics have become increasingly darker by comparison. 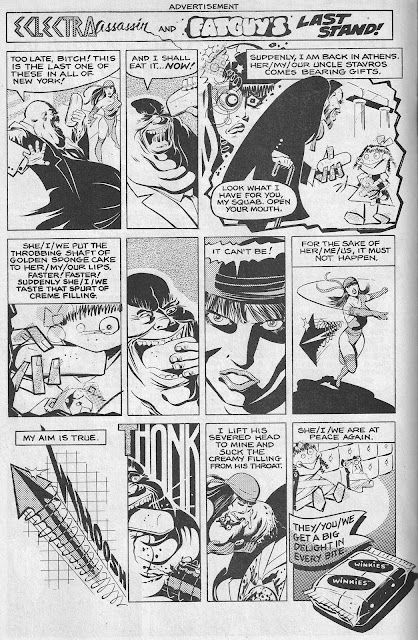 Quick trivia question - which comic character appeared in the most Hostess ads? You would think that popular characters such as Batman and Superman would be fierce contenders. Nope. Superman's appeared in 10 ads, and Batman in 15. Spider-Man is a close contender with an impressive 21 ads, but he's narrowly beaten by Casper the Friendly Ghost's total of 24 ads. Think I'm exaggerating? Check for yourself and scroll down to the 'C' section.
Posted by DeBT at 7:19 PM