Let me tell you about the recent expecience I just had a few days ago.

I was looking through a random Anime video store that was going out of business, checking the shelves for anything worth taking out. There were some live-action movies that I wasn't that interested in renting, and could easily find elsewhere, so I started browsing the back shelves of the store, looking at the old-school video games that were in stock. In this case, this included N64 and PS2 games. Even though I kept thinking "why bother?" in the back of my head, when I was living in an age where emulators made hunting rare games redundant, I still couldn't help myself from looking. After all, there might be something worth looking at.

Then I pulled out a random shelf out of a random corner of the shelf and was faced with an amazing surprise. There were rows upon rows of Gazette Sunday comics in reasonably good condition, each with a typical children's drawing in front of them. 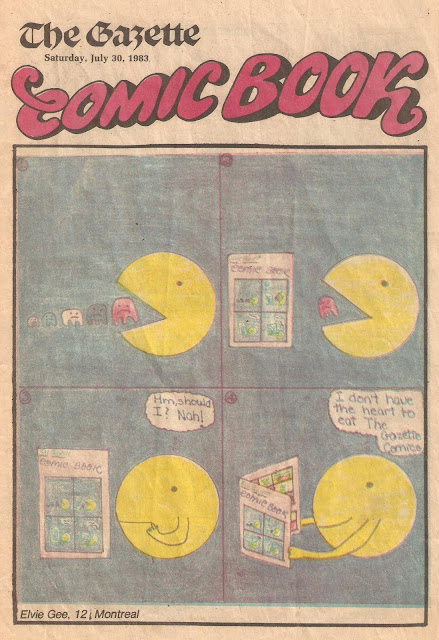 I could've used a paper bag at that moment because I was hyperventilating like an old rusty ventilation system, and probably attracting the attentions of the other patrons there, but I was too excited to care. This was the kind of collection I'd only had dreams of finding in dusty corners of basements or garage sales. And here was a whole slew of comics from the early 80s available at my fingertips! Half of this stuff I had never seen before, which meant there was a very good chance at filling in some gaps in my collection and my memory. These were comics that hadn't seen the light of day in years and they were available at my fingertips! Not to mention that this could be additional potential material for my blog. This would put a large dent in my budget, but it would be worth it!

I took two huge stacks of comics out of the box and carried them, looking for a flat surface to lie them down on so I could sort them through and organize which piles were comics I already had, and which I didn't. I'm very good at organizing things, but I need a consistent system for it to work. Within the confines of the Anime store, it was surprisingly difficult to find a suitable clear table. The first platform I used somehow had too many loose clothes lying around, and every time I kept moving them, they just seemed to keep getting in the way. I didn't want a single fabric to disturb the underlying surface of the comics, not to mention making a mess I'd probably regret later. If the pile grew too high, there was the danger of it tipping over, and I didn't want that. There would be plenty of time looking in the insides, but I needed to separate them first. 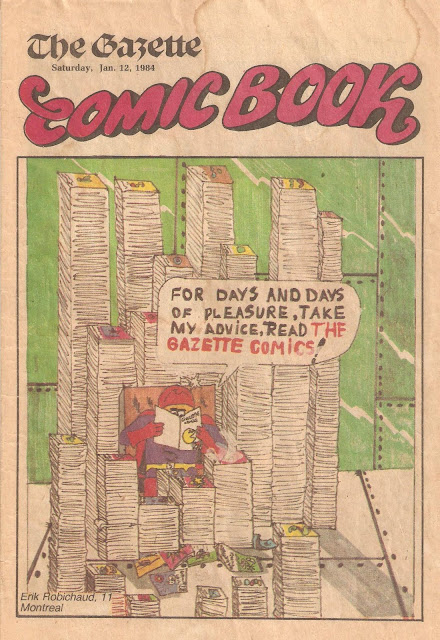 Then to my great horror, while cleaning up my surface area, I accidentally knocked over a pile of my comics on the floor. When I looked over the counter, amongst the boxes and bags, they'd mysteriously disappeared. A passing girl who'd seen the incident take place pointed to under the counter where they'd bounced off a backpack, but when I looked there, all that could be found were a bunch of magazines in different subjects, as well as various ads. None of my comics could be found anywhere. When I stood back up on the table where the pile of comics had previously all been meticulously organized, this pile of paper was sloppy, disheveled and random. In addition, for some perplexing reason, there were a few Reader's Digest books in the mix. I was wondering what was going on. The books had all been perfectly organized before... 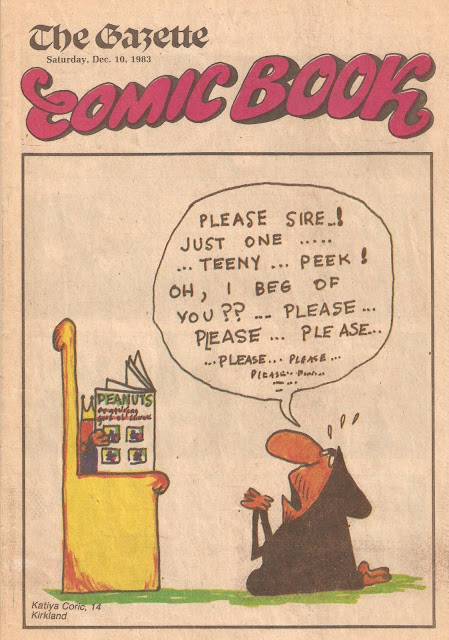 Yeah, sorry to ruin everybody's expectations, but chances are you probably figured out what was happening long before I did. Besides, I wanted to convey the kind of frustration I constantly have over not being able to find most of the childhood comics in question. Most of the other comics have had recent archival collections, but there's still a wealth of comics from when I was growing up that I'll never be able to experience again, because they'd have to go through the early stuff first. Not to mention it won't be the same, since they'll be divided by their individual series, and not grouped together into an unique pattern in the Sunday pages.

There was one Broom Hilda comic I dimly remember that had Gaylord seeing a flying saucer, and making admirable remarks about it to the green-skinned witch. Then the UFO landed, and out popped a robot-like alien holding a mechanical device while Gaylord looked noncommittal and Broom Hilda looked surprised.

From this brief description, it's obvious that Gaylord was remarking on how we would benefit from the Alien's advances in science, technology and philosophy. Then the actual alien revealed itself to be nothing more than a salesman hucking out mediocre wares. Even though I know that's the most logical outcome, I still want to see the actual comic itself so I can determine it myself for sure. 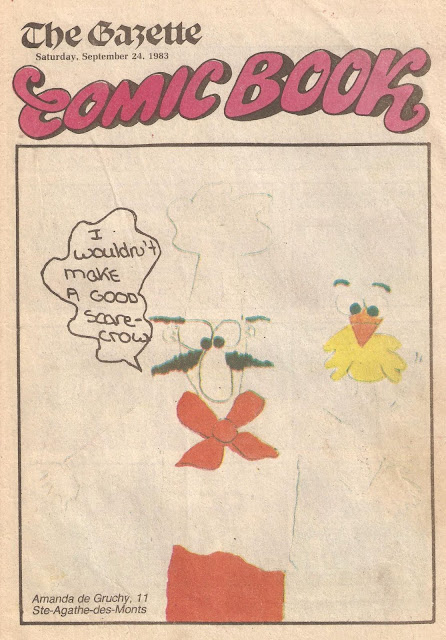 While readers might feel cheated in the same sense that Jason Fox was when he found a whole cache of Christmas presents under the tree that he'd missed, I've grown accustomed to this kind of thing. It was just that this dream had a larger sense of scale and build-up than previous searching dreams I had. I can take some solace in the outcome, because I remembered one of the covers that was briefly shown.

It had Snoopy looking sick on his doghouse in the pouring rain thinking, "I'm telling you, I AM innocent!" However, considering that he looked like he'd eaten too many cookies, he probably wasn't as innocent as he claimed.

When the Gazette Sunday comics were released, they were always accompanied with a children's drawing that graced the cover of the Sunday comics in a format similar to a pamphlet. There were multiple interpretations of the comic characters, which was always interesting to see, and several of them proudly displayed the kind of pleasure that could only be obtained by reading Gazette comics. They're not quite on the same level of the alternate covers from the Covered site, but they're still pretty well done. 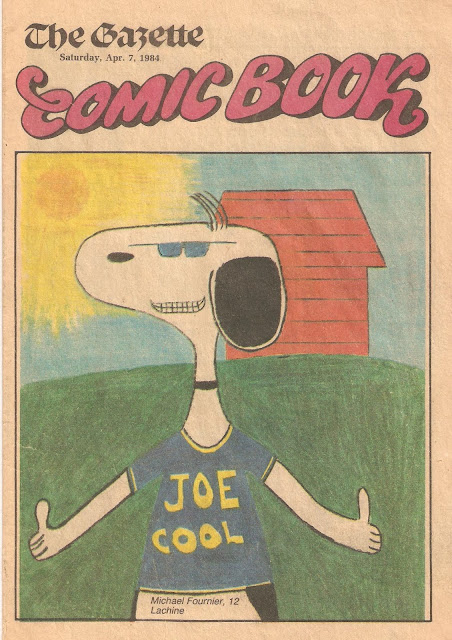 It was considered a great honor to see their artwork made public, and there must've been a lot of submissions. The output eventually slowed down to a crawl when they changed their format from a comic-book sized release to a half-page newspaper spread of several pages. Even two drawings at a time didn't save them, and they disappeared altogether in 1989 and never showed up again. They became even more redundant when the comics were compressed onto two-three newspaper pages, which reduced the quality somewhat.

This is how I'm able to categorize the comics I've read - by the shape, dimensions, size, and even the paper quality of the Sunday comic in question that I read, I'm able to find the relevant comic amongst dozens of hundreds of single panels and similarly-themed jokes.

I once erroneously made an attempt to try to sell some extra copies of these Sunday comics at a comic book store to value their worth. The man behind the counter politely said that they were only worth the paper they were printed on, and therefore only held value to the person who'd want to read them. 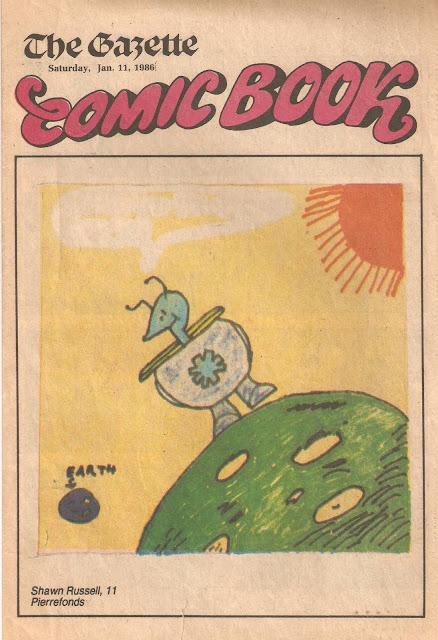 Bill Watterson may no longer have to worry about finding Pogo collections in old dusty corners of the bookstores, but I have no physical equivalent for Sunday comics. (I sometimes still have dreams of seeing a book of collected Calvin & Hobbes sketches or unreleased strips in bookstores every now and then) Incidentally, if Lord Morpheus' library of stories that were thought up but never completed actually exists, I know I'll be headed straight to the comics section. Good old section 741.5, or whatever filing system Lucien uses.

With the passing of every year, it becomes less and less likely that I'll ever find any more copies of old Gazette Sunday comics (or any newspaper comics for that matter) from the 80s that'll jog my memory. Yet I still live in the vain hope that I'll somehow be able to find a hidden stock of treasure buried in somebody's basement somewhere... 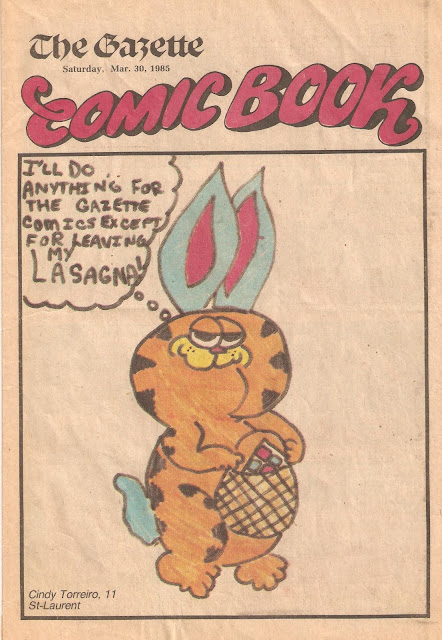