In today's Blondie, we were treated with a general reminder of the true meaning of this month's holiday season:

However, as is typical with legacy strips, this was just a watered-down and condensed version of a previous comic. Until I scanned it, I didn't notice that the woman in the pentultimate panel was also visible in the background in the first panel. (Or third, if you're counting the nonexistent throwaway panels. Fourth, if you include the title panel)

Just to round things out, here's a longer-term version of a similar event, leading to a different conclusion. I particularly like the various levels of set-up before the rousing finale. It's a wonder that these men who're being used as their wives' personal shopping carts don't wind up dropping their presents more, let alone become blind from having their view obscured by Xmas patterns dancing before their eyes. 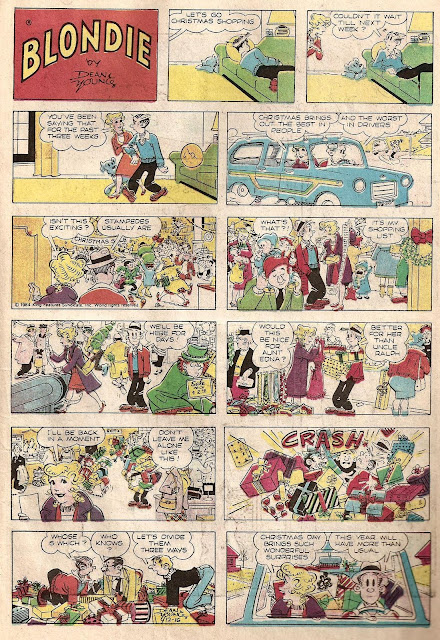 When I was a kid, I used to try to carry every single item mentioned in the Ernie & Bert Book where Ernie would show the latest container he'd relocated everything that led to rationalizing Bert wearing a pot in place of his cowboy hat, because it was holding his fish, which had no room for crayons in the fishbowl, which previously had soap in the crayon box... you get the idea. If I dropped any of these, I would start over from the beginning until I got it right. It was only made easier by having my sister play the second party by putting the kangaroo doll on my back, which was the main tipping point that led me to restarting from square one. Only when I reached the end could I safely let everything fall on the floor. In Dagwood's case, he could be excused by having plenty of experience in balancing the entire contents of the fridge on his arms in order to create his legendary Dagwood Sandwiches. 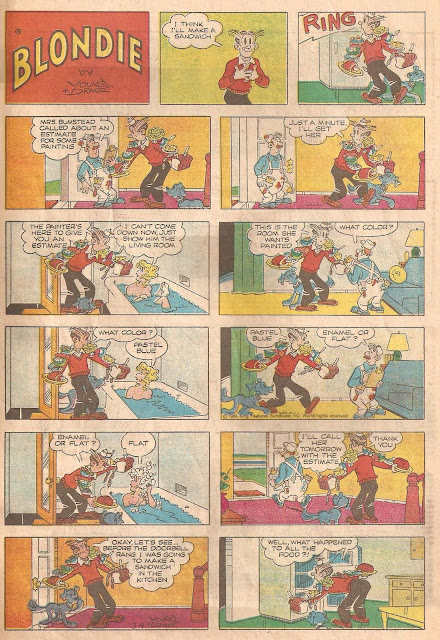