With the recent sales success of the second volume of Sailor Moon back on the shelves, it seems that any fears that the 20-year old property might be unsuited for a resurrection were unfounded. Turns out that there's still a strong potential female market in an overwhelmingly male dominated territority. Strong sales of the first volume of Osamu Tezuka's Princess Knight also showed the same, despite the Manga company cutdown last year.

While growing up, I used to be on the lookout for any acknowledgement of mainstream entertainment slowly acknowledging Anime's influence. Star Trek used to be more subtle in their Easter-egg knowledge, but it wasn't until the mid-90s that it became more blatant. Tuvok's finger mediation ritual in a Voyager episode blatantly ripped off Rei's signature "Fire Soul" move. Deep Space Nine had one-eye headsets similar to the Saiyanjins. Now, I can see Ghost in the Shell allusions and Oh my Goddess! drawings in Flashpoint, and I don't get as much of a thrill as I once did, but the impetus is still there.

Sailor Moon had a larger fanbase in Canada, since it showed at more respectable airtimes on YTV at 12:00 and 3:30 respectively. While the material tended to be childish, it was still enduringly appealing. The fact that they were long-legged wide-eyed babes in short skirts didn't hurt either. There was even a brief Air Farce skit that had two Navy men bending over the side of the boat to see something in the water, revealing their buttcracks. When they bent over for the third time, the title logo for the Anime popped up.

When the announcement for licensing Sailor Moon was first made, I thought that I would refresh some people's memories of a webcomic's forgotten side project where Sailor Moon & her friends held up a bank. At the time, the artist said it was an attempt to write a 4-page project for his school club. The old filler comic had the basic plot of "a villain and their henchmen rob a bank, a hero crashes through a skylight, then a huge Mech suddenly appears". The artist put it up, then said it would be deleted forever. However, it must've made quite an impression, since it's still available for online viewing, so that left showing that one out.

Instead, I thought that I might as well show a little-known (let alone seen) tribute from the pages of Angloman. Or more specifically, the second book. The actual setup isn't that important, since it involves West Island Lad taking some time off by going to the mall, and seeing an attractive girl arguing with her boyfriend. Of course, things never stay quiet for long, and the tedium is interrupted when a giant robot bursts onto the scene. 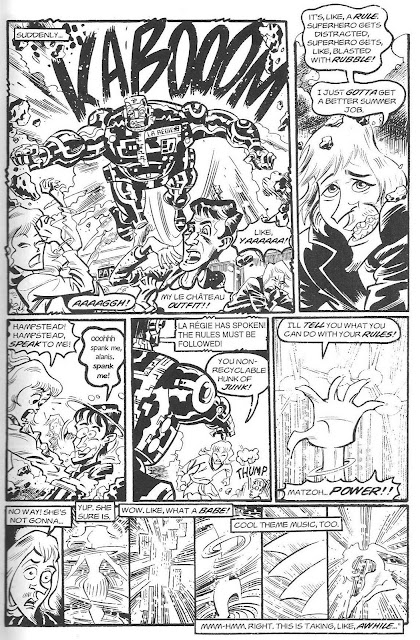 There was a brief cameo of Matzoh Girl, (briefly mentioned in a post of Jewish Women in Comix), who had a transformation and powers very similar to the Sailor Senshi.  Unlike America, Sailor Moon was extremely popular among Canadians when it first aired, and had better televisable hours.  For the three of you who understand the references, and the large majority who are largely clueless over Matzoh Girl's theme, it's because there was some controversy over selling Jewish foodstuff on Passover. 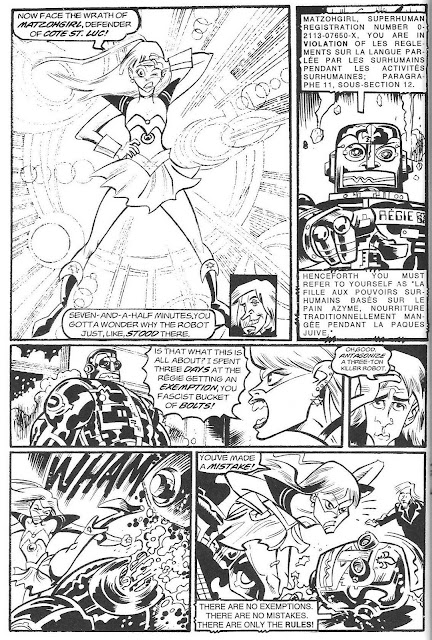 At the time, there was a big kerfluffle over Matzoh being sold in Montreal. Why? Because they were imported from America. This wasn't out of some displaced brand loyalty over the pride of their domestic market being overtaken by outside forces. Nor was it from some infested bugs or virus travelling via these boxes. No, what they objected to was that these Jewish products were being sold only in ENGLISH. 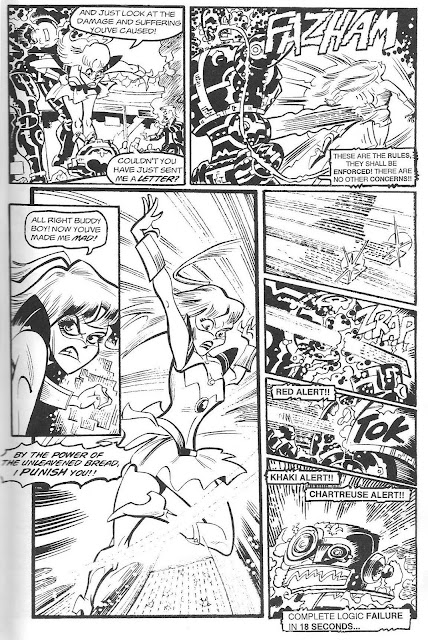 To go into the bureaucratic nightmare that involves Bill 101 and the Francophone fear that they're being repressed by the English language would take up more time and space than I'm willing to devote my time to, and detract attention from enjoying the comic. Besides, I'm saving that for when Papercutz releases their version of "Smurf of One and Half a Smurf of the Other". 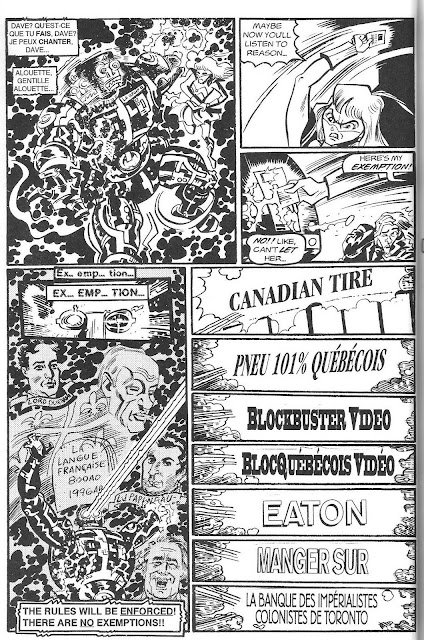 For the unaware, Eaton is a Canadian department store. For the unilingual, Eat is "Manger", and On is "Sur". 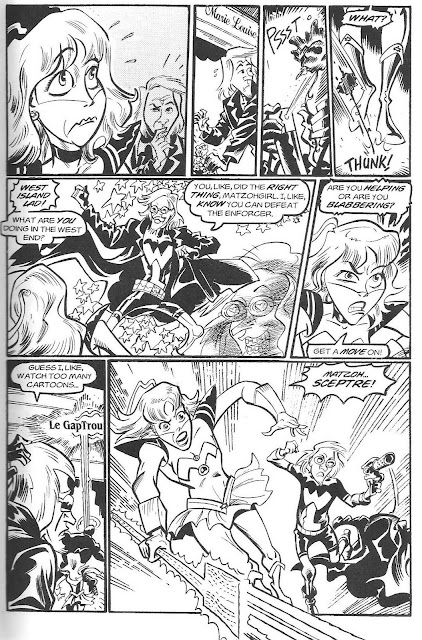 For the confused, West Island Lad spraypainted a flower in the upper row there. If you've ever tried to throw a rose, and was surprised when it limply fell three feet ahead of you, this is a pretty rational explanation. Also, there's a blink-and-you'll-miss moment in the 7th panel where the Gap gets renamed. 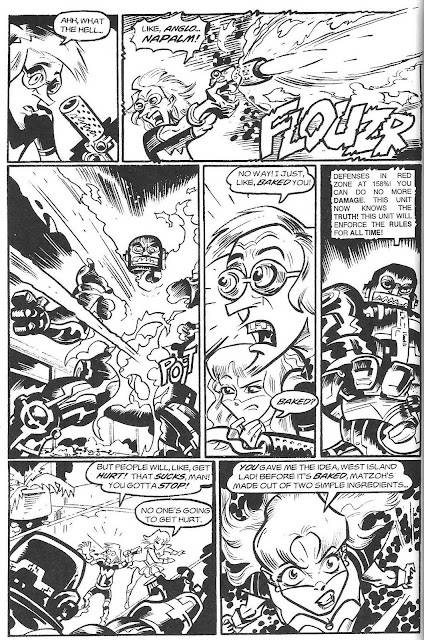 A Sailor Mercury moment here. As much as I liked these references, I was also embarrassed and disgusted by how out of sync the proportions were compared to the traditional Anime models. This kind of influence has gotten better with the latest generation having grown up with actual Manga, and not shoddy knock-offs, but this kind of thing still bugs me. 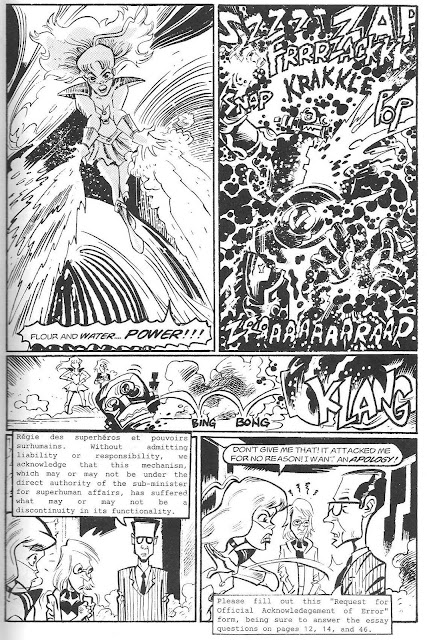 For all their efforts, they're rewarded by a bureaucratic lawyer who denies any involvement, and asks for compensation regarding a clerical error. He also showed up in the first Angloman book when the titular heroes defended a crumbling Olympic Stadium that suffered significant damage while trying to save it from a disgruntled fan riding a Mecha (yes, another robot) that looked like Bonhomme de Carnivale. Despite the premise of using iconic Canadian icons, this somehow manages to wind up less awesome than it sounds. Canadians are kinda weird that we have several iconic landscapes / mascots, but we don't really advertise the heck out of them like other countries we could name. (OK, the United States) We define ourselves as Canadians as "not being like Americans", which is strange considering how similar our culture / entertainment is.
Posted by DeBT at 11:34 AM