Fill in the Blanks

There was a recent Adrian Tomine interview where the cartoonist mentioned abandoning several of his comic projects because he was more concerned with real-life issues. Daily interruptions can sometimes be a major influence on someone’s work, but too many of them can be very offputting and reduce their drive to continue going down a certain storytelling path, especially if the road in that direction puts up more barriers than they knock down. In the end, we have to ask ourselves whether the story we’re writing is really worth telling.

However, we shouldn’t be too overly concerned over Adrian’s dumping several potential series. I’ve found that I’ve preferred some of his earlier stuff when he wasn’t trying too hard. One such example was a silent two-page comic telling an obvious story. By just looking at the pages, it’s clear what’s happening within the span of the panels.

Usually, I have a horrible time thinking up one-liner punchlines to single-panel comics. There's either too little or too much variety that I can think of, and I usually wind up being too literal. I'm always amazed at the number of people who're able to give multiple contributions, when I can't even think up one. I'm better able to give a revised script if there's more than one panel, since I can give the semblance of a story happening within the confines of the pages. The more panels there are, the more I can fill in the blanks and flesh out the elements throughout.

As a result, I wound up writing two different versions of the same script - one that would accurately describe the action on the screen, and another that would be a satirized take, similar to MAD’s Murder the Husband / Story drawn by Jack Davis. Other readers are welcome to do their own take on the comic, but it'd better not be too close to mine. 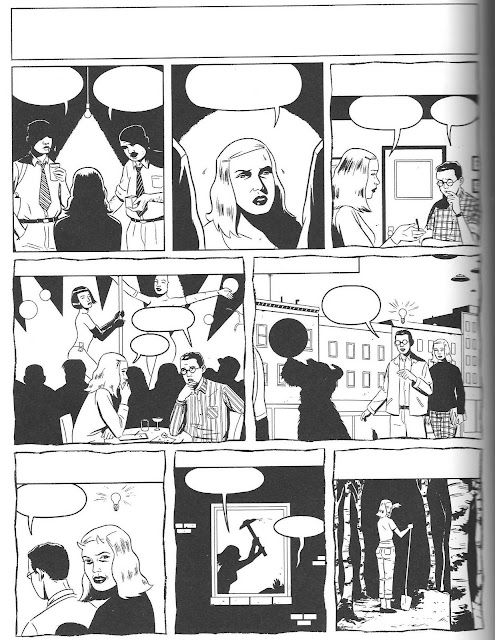 Panel 1
Sorry to bring you in like this, Ma’am.
If you could just go over what happened one more time.

Panel 2
Well, there’s not much to tell. I last saw my partner a few months ago.

Panel 3
We were working on an icon that would best represent our company.
How about a penguin with an anchor?
Maybe something less challenging.

Panel 4
We traveled everywhere, looking for inspiration in the unlikeliest places.
A giraffe with a ladder?
Needs work.

Panel 5
Until one day...
Waitaminute - that’s it! A dog holding the product on his nose!

Panel 6
He hit upon the perfect combination that could possibly work.
I bet we’d make a killing with this, what’d you think?

Panel 7
I stayed over at his place, ironing out the bugs in our project.
That idea’s mine, bastard!
Urgl...

Panel 8
I left at night, leaving him sleeping comfortably on the table. 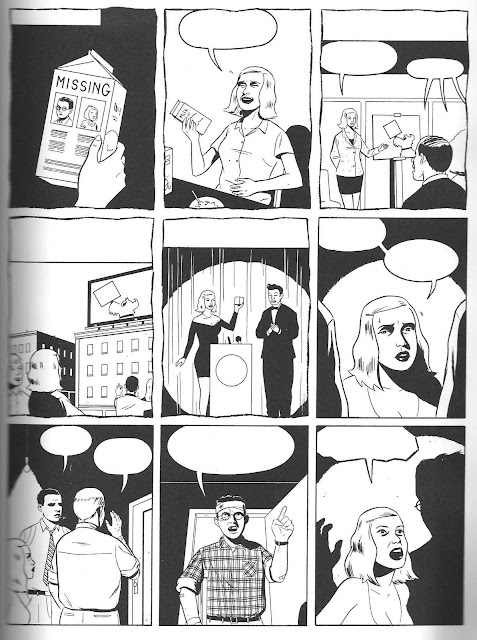 Panel 1
The next morning...

Panel 3
When he didn’t show up to work for the meeting, it fell to me to continue my half of the presentation.
...therefore, this should capture our audience’s attention. Agreed?
Agreed.

Panel 4
Within days, our product became the hottest selling stuff being sold around the world. You could hardly pass a street without seeing it being advertised somewhere.

Panel 5
I only wish that he was still be around to appreciate how his efforts had borne fruit.

Panel 6
That’s the last I ever heard of him. What more can I possibly say?

Panel 7
She’s not falling for it.
You can come in now!

Panel 8
How could you say all that with a straight face?! I knew you were ambitious, but I never thought you’d go that far!

Panel 2
It’s like I’ve been saying. I want to admit to committing a murder.

Panel 3
For years, I’d been trying to have sex with the cute nerdy guy at work.
Want to make out on my desk?
Later, I’m thinking.

Panel 4
I lured him to several suggestive places to subtly hint my forward advances.
Why did you want to have lunch here?
Oh, no reason.

Panel 5
Then all of a sudden...
Hey, I just thought up an amusing VTM recorder joke to send to The New Yorker!

Panel 6
I got a devilish thought in my mind to seduce him at his place later.
I better write it down before I forget!

Panel 8
I then buried his entire apartment in his backyard so no one would notice!

Panel 2
You’ve got to be kidding me! Who puts pictures of adults on the back of milk cartons nowadays?

Panel 3
With no one else present to give his presentation, it fell upon me to take over his lousy job.
And now, for my next slide, a doggie with a square on his nose!
Oooh!

Panel 4
As an attractive saleswoman, I managed to pass all his side projects that’d been toiling under obscurity. Despite being rejected submissions of New Yorker cartoons, they were a smash hit in the advertising world.

Panel 5
Even as I accepted awards from stealing his ideas, the guilt kept gnawing at my core.

Panel 6
And that’s exactly what happened. Really. Why would I lie?

Panel 7
She’s starting to crack.
Bring in the surprise witness!

Panel 8
What’s the big idea telling everybody you killed me? We only went out once, and you broke off our date halfway through!