Lately, there’s been a renaissance of reprinting classic comic strips, including legacy strips when they were starting out, and before they became deadwood, such as Blondie, Archie, and The Family Circus. These collections show us why they were once worthy of being on the comics page. In addition, there’s also been major collections of serial strips such as Dick Tracey, Little Orphan Annie, Terry & the Pirates, and Modesty Blaise. Likewise, obscure titles that have been long overlooked, such as King Aroo, by beloved children’s artist Jack Kent have been licensed. And that’s not even including artsy strips such as Krazy Kat, Polly & her Pals, and the upcoming Barnaby and Pogo collections.

However, I’d argue that there’s another section of newspaper comics that’s being largely ignored. Namely, the more recent strips that’re still going on strong, such as Broom Hilda, Pooch Café, and the titular Ernie. (More on this later) Part of the problem may stem from that these strips are still ongoing, and haven’t reached their natural ending yet, due to Author Existence Failure, or knowledge of how to package all the recent (and past) strips into one convenient package that’ll satisfy customers in the long run. There’s the risk of not collecting everything if the author doesn’t have a finishing point or retirement plan in mind, which is why its easier to collect past comic stories early in the cartoonist’s height of popularity so they’ll remain fresh in their reader’s memories. 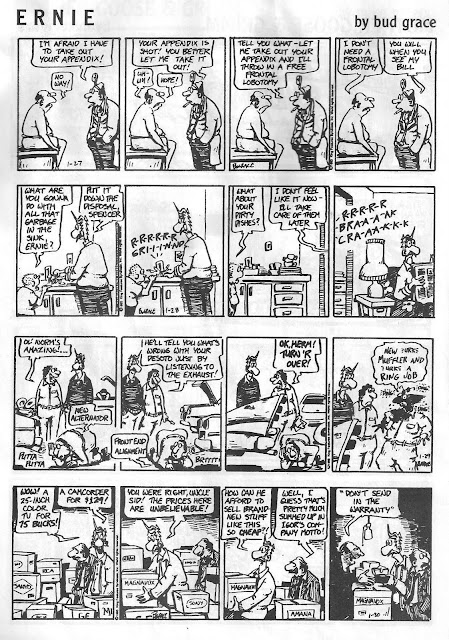 One strip that I’m surprised has never quite caught on is Bud Grace’s Ernie, even though it has a similar level of quirkiness similar to Bloom County. Part of it might stem from the name, which sounds like half of a Sesame Street dual cast. The titular character is a guy with a large nose who looks like a blonde version of Adam. The comic has a very diversive (and weird) cast of people. 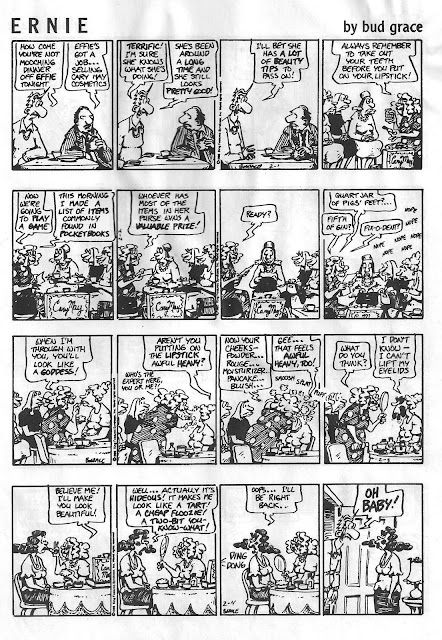 Because Ernie was such a milquetoast, it was practically inevitable that he would be overshadowed by the more zanier residents of the suburbs he lives in. After several years, the focus of the comic shifted from Ernie to his sleazy Uncle, and it was later retitled The Piranha Club. Uncle Sid who, like Popeye, took over the spotlight from the main character, and unlike Popeye, has all the ethical qualms of Quark from Deep Space Nine. Once the focus shifted to Uncle Sid away from Ernie, Ernie became somewhat less of a perpetual loser, and even recently married his girlfriend. (Ernie still has a perpetually large schnozz though.)

So far, I’ve only ever seen ONE Ernie book collection, Ernie out of Control, which in its introduction said that it was likely to be the “only Ernie collection to ever be released, and if found, should be snatched up since it was a rarity.” This is one of these instances where I was too cheap to buy myself a copy when it was available at the bookstore in the vain hope that maybe the artist was overexaggerating his claim, since I thought that maybe I might get it as a birthday present, or a larger collection would be released in the future. Wishful thinking. It’s been over ten years since I last saw it available (I don’t think anybody else picked it up), and have yet to see any future volumes available. 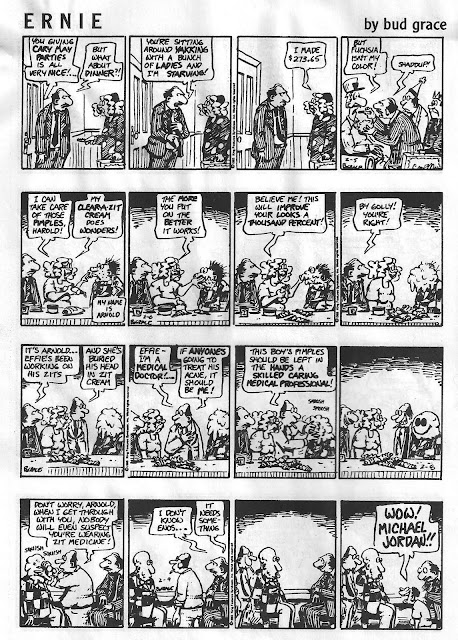 Surprisingly enough, it seems to be more popular and well-known overseas, where it’s likely to be seen by a wider audience. According to Wikipedia, it’s “highly popular in the Scandinavian countries Norway and Sweden, where it is published in a bimonthly comic book. It is also one of the most popular comic strips... in Estonia and Latvia (if not the most popular). It is published in Scandinavia's (two) largest newspapers. It is also syndicated to Japan's Daily Yomiuri along with Calvin and Hobbes.”

Read that again - even Japan knows about Ernie's existence, and the fact that it’s good enough to stand next to Calvin & Hobbes should be proof of quality enough. Even if the later strips have fallen in quality, the imagination and energy of these early comics can't be denied.

Some of the more memorable strips that I can remember include:

Ethel, the kindly old lady who cooked up strange and unusual recipes left a bag of cookies in the hallway, and warned Spencer, a bratty boy, not to eat any of them. Ignoring her warnings, he quickly stuffed a cookie in his mouth, asking what kind they were. "Chocolate?"
"No."
"Vanilla? Mint? Caramel? Almond? Peanut butter?"
He kept asking and shoving cookies in between breaths until Ethel gave the final ingredient; "Dog Milkbone", which left Spencer staring with bug eyes.

A surreal week-long story that started out with Ernie lying in bed and feeling something crawling up his leg. He was wide-eyed in terror, wondering what it could possibly be... and when the mysterious thing popped up from underneath the covers, it turned out to be Mr. Squid, the puppet mascot of a squid fast-food restaurant. Upon seeing the talking animated puppet, Ernie deducted that he must be dreaming, and proceeded to pinch himself. When he yelped out in pain and didn’t wake up, that set off a debate between Ernie and the sock puppet squid over the the best method to figuring out if he was dreaming or not. Somehow, the conversation took a turn for the weird when the squid suggested that Ernie knock himself out with a frying pan, since pinching himself wasn’t strong enough. This wound up with Ernie waking up in the kitchen telling his dream to Ethel and Spencer. I can't recall what Ethel said, but it might've had something to do with something she cooked that didn't agree with Ernie. 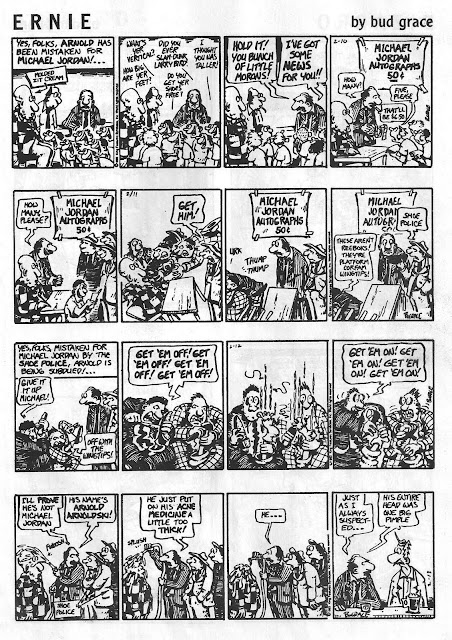 This, and The Far Side are probably the only comic strips in existence that even bother to mention the usage of squids in them. With such outlandish comic stories that last for about a week or so, with amusing dialogue and unique plots, it’s curious why this hasn’t gotten more critical acclaim. Part of the reason may be because so many of Uncle Sid’s plots are too outrageous for the typical newspaper comics page. Uncle Duke only gets leeway because his scams are loosely based on reality. With the last volume of Bloom County coming out, and the weaker successor Outland in the works, Ernie could be a serious contender if a comic publisher would dare try to take a risk in their hands. Bud Grace himself switched careers from an atomic physicist to cartoonist after all.
Posted by DeBT at 2:55 PM