Sometime back in April, I made an interpretation of a Tetris game that I felt was a fairly accurate revision of the newest Xkcd strip.

However, I felt slightly discouraged when I found out that a similar strip to mine had already been posted. As a regular contributor to another parody comic strip, I should've been aware that ideas were likely to overlap, but it still bugged me.

I only recently discovered Making Xkcd Slightly Worse via a Square Root of Minus Garfield comic. I was reluctant to check it out, because I'm always afraid of trying new things. Either I'll hate it upon my first chance, or I'll become too addicted to the latest new toy and find out I can't live without it. It's why I was so nervous about using the internet in its early days, because I worried that I wouldn't be able to tear myself away from the daily distractions. However, since it was another revised parody strip, I decided to give it a shot.

Sure enough, my fears were acknowledged - once I got started, I found it extremely hard to stop. Actually, I found browsing the forums to be a better indicator for judging the quality of the comics, because I could see many of them at once, which saved on download time. Not to mention the mouseover text was out in the open, which meant I didn't have to constantly move my mouse over the picture to find the hidden joke. Sadly, some of the strips on the forums have disappeared, and even the comic archive didn't bother to make any copies, so until the original contributors bring them back, they'll be lost to the annals of time.

Most of these comics started out as concepts of ruining the joke, excluding a single element/panel or combinations of various strips that were just as, if not funnier than the original. Even Randall Munroe seems to have been influenced by some of these strips.

After reading so many comics in a row, it was inevietable that I would feel inspired to try a few strips of my own. I felt very much like the guy in this comic - I stayed up all night and couldn't stop until I'd gone through every single comic until I got a general idea of the parameters involved. Some jokes got reused multiple times, while others only appeared once. One particular favorite were variations on the on the That's what SHE said! jokes. I didn't even know the basic setup, let alone why it why such an innocuous line wound up sounding so funny, but I think I managed to find a good combination from three different strips. 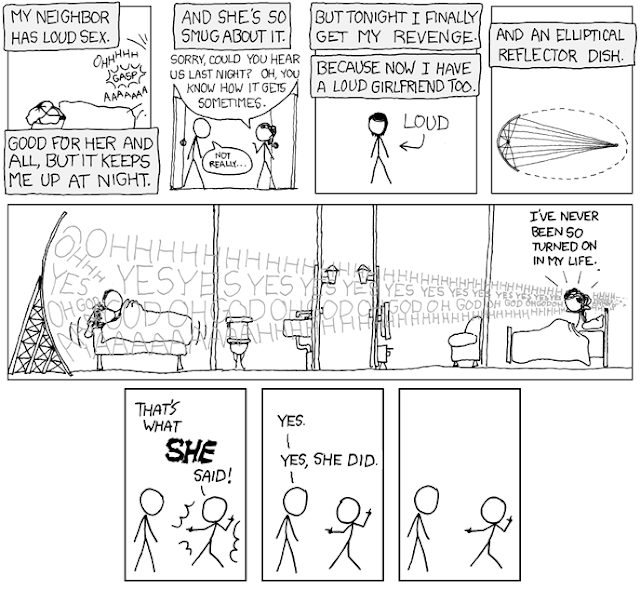 For all intents and purposes, this backfired in more ways than one.

In the meantime, I created a few more Xkcdsws that I thought would be fun. However, the backlog seems to be even longer than for SromG, and Xkcdsw doesn't update every day, which takes longer for my turn to come up. I was told that my comic would be released on July 23, but apparently that's for the Webpage date, not Calendar date. It's currently at April 20th, and I'm getting impatient at ever getting to see my comics get posted, so I figured I might as well save myself some aggravation and just post the stuff up, image memory be damned.

I also made a slight variation to a comic that had already been done better.
I also made two variations of a similar joke, with a different punchline:

While on a webcomic binge, I combined two similar concepts from two different sources, the second being Cyanide & Happiness. I'm sorry to say that Black Hat's reaction looks more like he's running away, than actually being blown back. If you have him facing right, it'll look closer to my intended use. This one was inspired by a punchline from an Xkcdsw comic. The question of who's actually dreaming is never called up.
And now, for my magnum opus, taking elements from 25 different strips. I doubt anybody'll be able to beat my record, though they're welcome to try. This was my most ambitious Xkcd project, trying to find sentences that would have warped meaning for the original comic. Only one panel was borrowed from an Xkcdsw strip - all the others were actual lines quoted in the main webcomic. There were at least three revisions, with me replacing one carefully chosen sentence with another. The ones that were in the first draft included the following; I've never seen so much blood!, You're my lovely cutie pie, and Those mysterious wood chips? Bonus points if you can accurately guess where they originally belonged.
Template
Colider, Gyroscope, Contemplative, Internet
Hamster ball, Talking, Balls, Kama Sutra
Black Hat, Cat, Turned on, Photoshop
Map, Spoiler, Compiling, Pencil
Politics, Vibrator, Blockier, Like you
Diet Mentos, Flying Car, Jurassic, Vista