When I heard the news that Steve Jobs had died shortly after his retirement, the first thing that came to mind wasn't the fact that he was responsible for rebranding Apple from an out-of-touch computer company into a marketforce. Nor did the fact that he was a founder for Pixar animation a decade before Toy Story was released even cross my mind.

No, the first thing that I thought of was that there would be no more Calvin & Jobs comics. 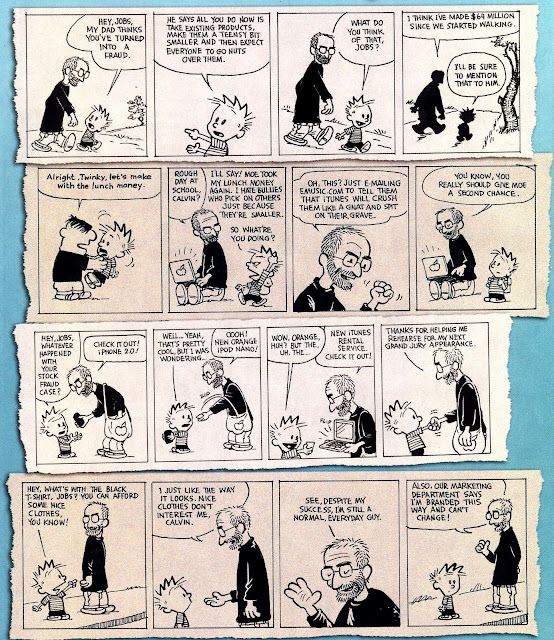 This is the typical thought process of someone obsessed with comics to the exclusion of all else. Go figure. 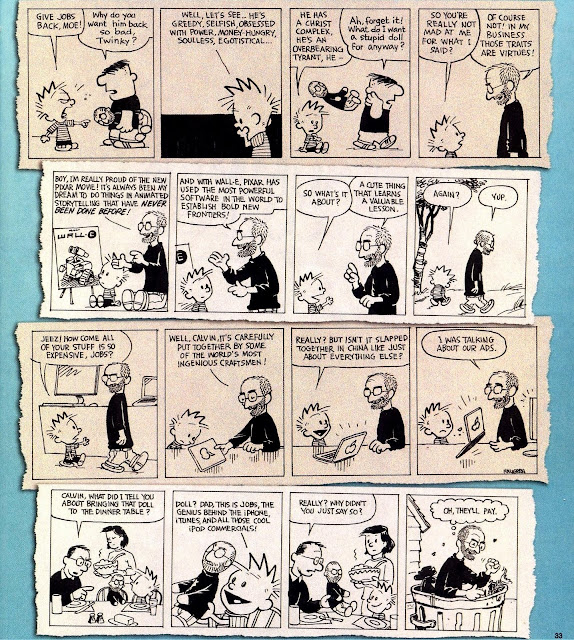 These tributes to Calvin were my first introduction to a guy I wouldn't have known, since Bill Gates was a more familiar figure in the computer world. Much like how MAD downplayed Princess Diana's reputation in their pages, I wasn't very shocked when princess Di died in a car crash. MAD has a tendency to downplay celebrities to the point of tedium.

Steve Jobs' been compared to Edison in terms of inventing things, it only seems fair to bring up a MAD documentary of Edison that had a minor disagreement about perfecting the telephone. "The proper way to invent something is to produce something that hardly works! Then make it a little better... another minor improvement here or there... Then like so, and like so again!"

Throughout his lecture, Thomas held up different phones throughout the ages from a hand-cranked phone, to a candlestick phone to a rotary phone. "Why pay once for this when you can make them pay for each of these along the way? That's the science of making a fortune!" Since Steve Jobs left four years of blueprints before leaving, chances are Apple will trickle those plans out through the next decade.

It seems to be a common recurring theme for ambitious men to suddenly die after they've accomplished their life mission and have nowhere else to go. Charles Schultz died one day before his last Peanuts Sunday. Jack Layton succumbed to cancer after winning a near majority for his party. A month after Yasser Arafat died, Ariel Sharron lasped into a coma that he has yet to recover from. These men only stay alive long enough to do their job for as long as possible. On the other end of the spectrum are men who work tirelessly, and succumb to their labors.

Now that Steve Jobs' no longer around, any future Calvin & Jobs strips would be very reminiscent of Calvin Minus Hobbes comics. One-sided delusional conversations with an invisible entity that nobody in the audience can see isn't quite as fun. Especially if you can't understand what the precocious crazy kid is so excited or upset about.

There have been three apples that changed the world: The one that Eve ate, the one that dropped on Newton’s head and the one that Steve built.
Posted by DeBT at 5:12 PM