It seems like every major comic nation has their own personal boy scout ambassador. America has their Superman*, Japan has Astro Boy, and Europe (or to be precise, Belgium) has Tintin. The latter one may not be as powerful as the first two, but his ability to survive in the face of impending disaster is nothing short of miraculous.

There's been some renewed interest in Tintin with stills of the animated movie being released. For years, readers worldwide have enjoyed the exploits of the boy reporter, though it (along with Asterix) have had an uphill struggle in finding an audience in America. Even though the new movie's directed by Stephen Spielberg, and Tintin was the archetype of Indiana Jones, there's still a lot of reservation of the actual outcome. The director isn't known for his reputation regarding animation.

Still, even if the movie turns out to be an unintentional stinker, it still won't take away the power from the books. There's a reason they've managed to be read by readers of all ages for over 70 years - they're that good. And by all ages, I mean ALL AGES. From babies growing up to senior citizens indulging in nostalgia. There's a timeless quality to these adventures, even though they reference events that took place back when they were being serialized.

Besides, Tintin's endured past clunky adaptions before. The live-action movies, The Golden Fleece and The Blue Oranges were new stories that took the popular characters with stories written by other people. Having only seen the Fumetti books of these films and not actually watched them, I can't verify for their quality. Hopefully, someday, I'll be able to find a copy and judge for myself.

Even the animated version which had to severely tone down the elements of Tintin's escapades, haven't severely impacted the integrity of the classic comics. One child reviewer complained that Haddock's swearing wasn't as imaginative or verbose as the comic versions. Drug-smuggling was toned down to diamond conveys, the storylines felt different on the TV screen, and the animation was somewhat jerky. The Nelvana series was more faithful to the source material, though they still had to tone down some elements, such as Captain Haddock's alcoholism.

All this is tied in to Tintin's earliest incarnation when he was Totor, an actual boy scout. He was so much of a blank personality that young audiences quickly latched onto him, and wouldn't be fleshed out until much later. This much is evident with Tintin's first adventure, where he endured an amazing amount of damage that would otherwise kill a normal man. There was a study that showed this hero would've been long dead if he suffered from the kind of abuse he'd accumulated over the years, which would account for his youthful appearance. Much like Jackie Chan, the amount of dangerous cliffhanger scenarios were toned down in the later years to appear more realistic, and the slapstick scenes were regulated to the supporting cast members who would be more accustomed to this kind of thing. Spreading the pain around = family entertainment!

Tintin in the Land of the Soviets was the only early Tintin book that wasn't coloured and redrawn and predates the controversial Tintin in the Congo book. Hence the following drawings, which weren't touched up, show how rough (yet charming) the first Tintin stories were. While the boy is entering a potentially dangerous country, he's constantly faced against agents who're trying to discourage the reporter from doing any negative coverage of their country. Since this (and the Congo one) were done for propaganda purposes, it's safe to say these sleeper agents failed. Within the first few pages, Tintin (and Snowy) is the sole survivor of a train bombing... 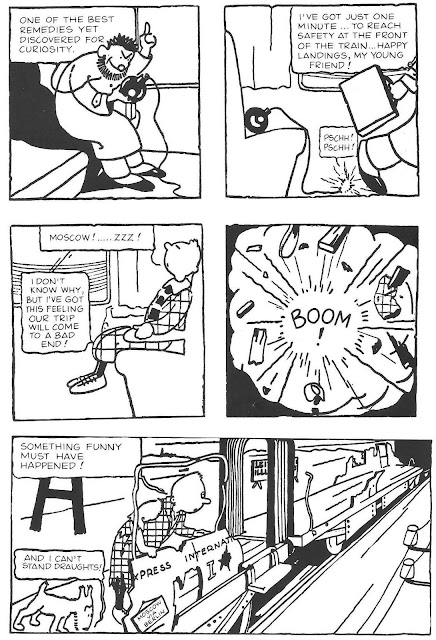 Falls out of a speeding motorcycle...

...and gets hit by a train in a getaway car. Keep in mind that this car was being attacked by bombs from a passing airplane. 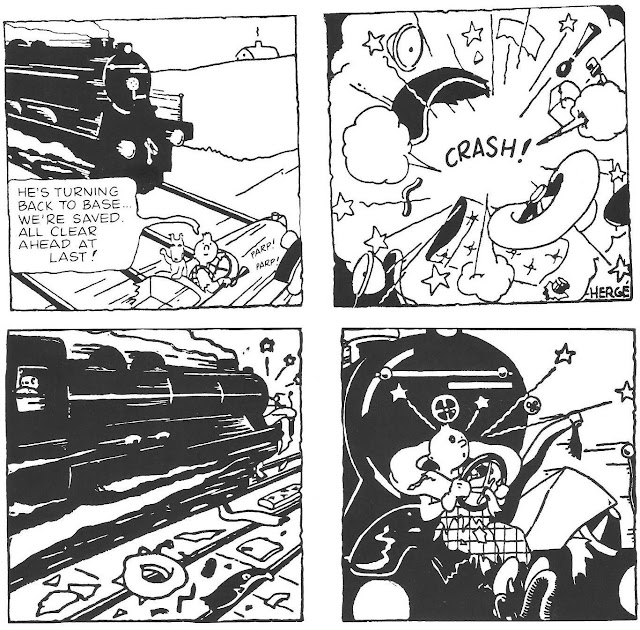 Later during a lull in the action, Tintin tries to go to sleep in a sewer. Not the concrete platform itself, but actual sewer water.

Next is a common scenario that happens frequently - being lined up for execution. Tintin's
preparation plans here are very omniscient, and could only happen if he'd had foresight that this would happen to him. Since he was intending to sabotage the army he was traveling with, this almost gets a pass. 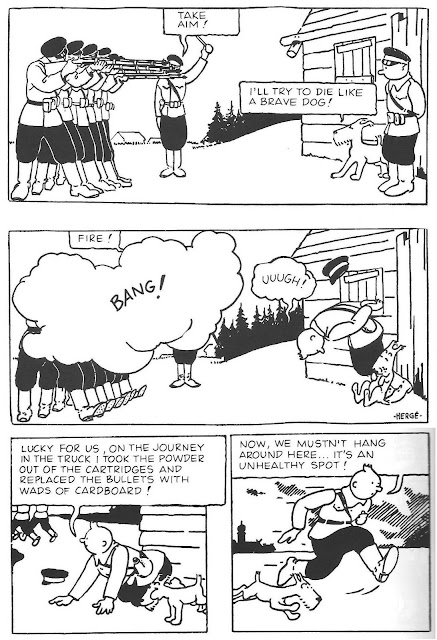 Next up, Tintin gets encased in a shell of ice. Don't worry - despite his proclamation of doom, he gets better. 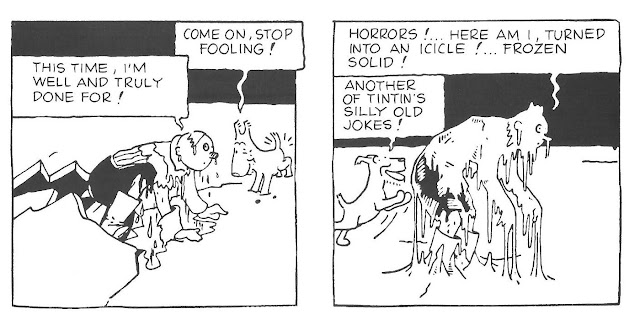 And finally, he survives a plane crashing face front into the ground. 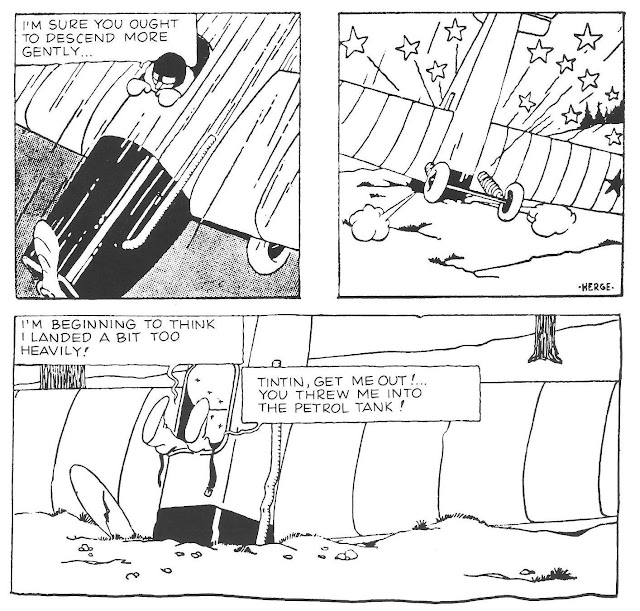 During all this, how do the Russians try to counter against this seemingly indestructible boy reporter? Halfway through the book, a Russian agent who looks suspiciously like Skunk Kusai hatches a spontaneous plan; having him slip on a banana peel and hope he'll break his neck.

Then again, the agent might've been onto something there. This theme would be picked up years later in Cigars of the Pharaoh as a successful way to capture Tintin. 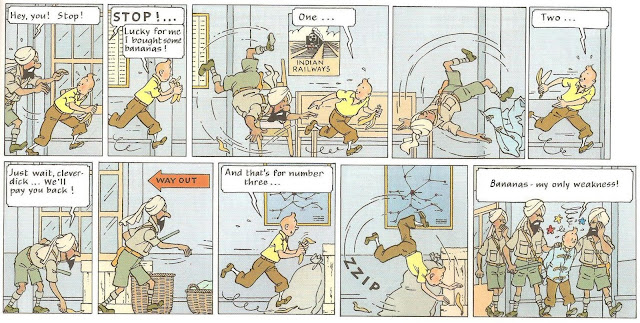 This seems to be the most dependable technique to stopping the young detective - stop with the outlandish plans and just use common sense.

*Interestingly enough, America's other do-gooder icon, Mickey Mouse, had stories by Floyd Gottfredson that were reminiscent of ongoing serial adventures very much in a Tintin vein. If Disney had capitalized on his adventures, rather than making him a bland character, we might've gotten more cartoons benefiting of adventure dramas rather than hokey good-guy type stories.
It's rumoured that Mickey Mouse was how Walt Disney saw himself, and Donald Duck was how the animators saw Disney. To put this in perspective, there's about 50 Mickey cartoons, and over 200 Donald Duck cartoons.
Posted by DeBT at 3:22 PM