While there's plenty of things about comics I like (ease of access, readability, images on the page), there's a few idiosyncrasies about the form that can drive me nuts. These mistakes are preventable if they're noticed beforehand, yet they keep getting made. Here then, are a few things that can almost ruin my reading experience:

1. The line that's not a border

Scott Mccloud described the space between panels as the "gutter", even though the terminology's never quite caught on. However, there are instances where because of the over-reliance of the ruler for creating borders, some panels can accidentally create a "gutter" effect in the middle of a panel. You're reading along, following the story naturally, when all of a sudden you see a line smack dab in the middle of the story, and you think that it's a thin panel, when it's actually a wall or door placed perpendicular to the character.

The placement of these double lines symbolizing the edge of a wall or door can create the effect of the end of the panel, when it's actually the middle of a panel. Here's a little quiz - how many panels do you see in this AxeCop comic? 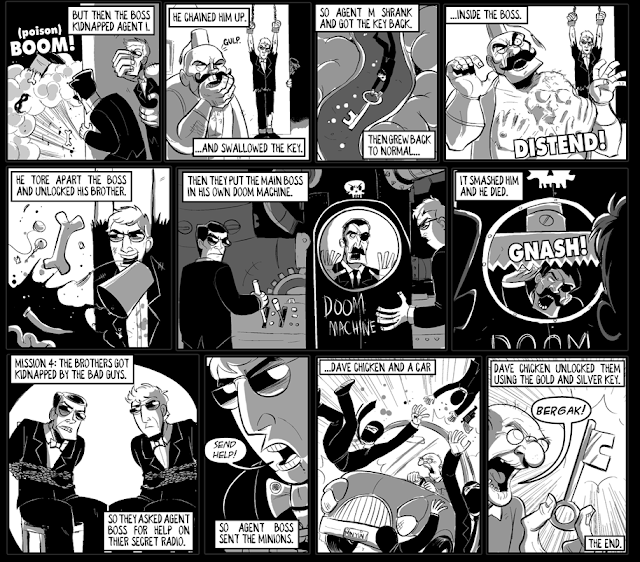 Upon first sight, chances are you saw 12 panels. Take another look and count again. Pay special attention to the middle panel. What makes this even more erroneous is that the placement of the panel divisions above and below are practically parallel to each other, creating the illusion of a border division where there's none.

On rare occasions, there can be vertical borders that give the illusion of seeing half a panel, when it's actually one panel. This page from Sergeant Frog where Tama fired off an energy beam from his mouth could almost be mistaken for two different panels if we weren't already aware of his ability. Only the sound effect overlapping the beam gives us any clue, but even that's not a guarantee, since Manga onomatopoeia have a tendency to cross time & space on the page. 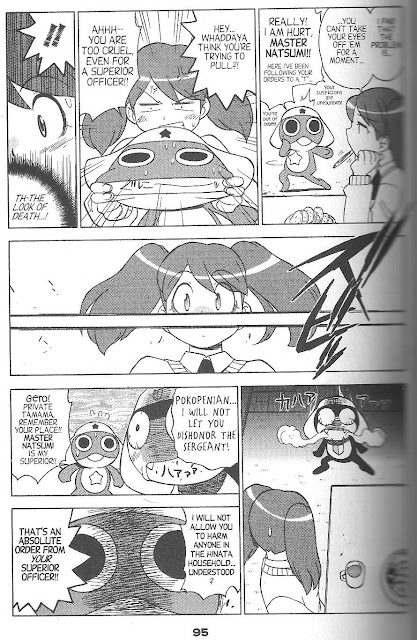 Normally, the placement of a body or balloon on the wall can help prevent the optical illusion of another panel. But you need to be careful about where you put them, otherwise, you could unintentionally run the risk of "cutting the head off". Such as seen from this Sam & Fuzzy fancomic. 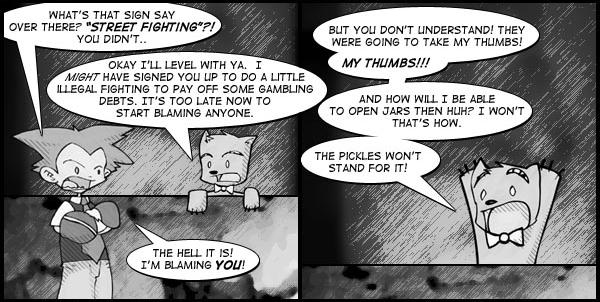 The below example is intentional though, forcing you to reread it again. Even with this foreknowledge, it's still easy to get caught up into this trap. 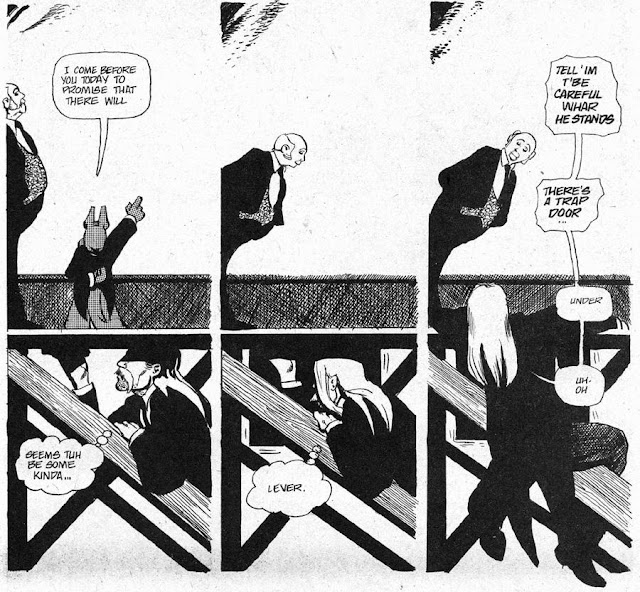 EDIT - just a month after this was posted, another cartoonist showed several tricks to avoid this, along with several other easy artistic mistakes that I missed.

2. A double-page spread that looks like two separate pages 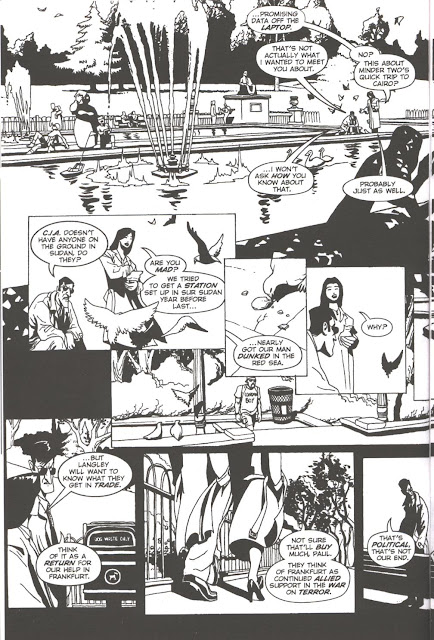 This is a major complaint I have with American comics. After dealing with multiple pages where the dialogue and action were faithfully regulated to one page, suddenly without warning, we're given an impressive splash page with multiple panels. Only problem is, the first half of the page gives no visual clues that what's happening on the other side is relevant to the first one. 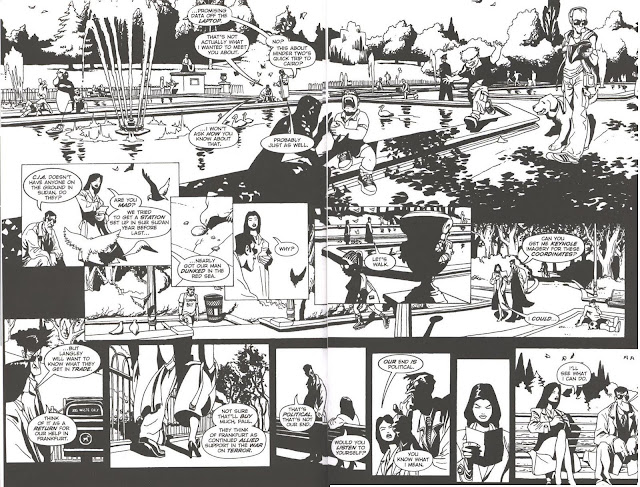 As a result, you won't notice that you're missing out on anything until you're already 2/3rds of the way through. At which point, you realize that you've been reading the page the wrong way, and have to go all the way back to the beginning and start all over again, so it'll make more sense. What really gnaws at your core is that you didn't realize that you were missing anything in the first place. It's never a good thing when a work makes you feel dumb for not noticing the so-called "obvious" clues. 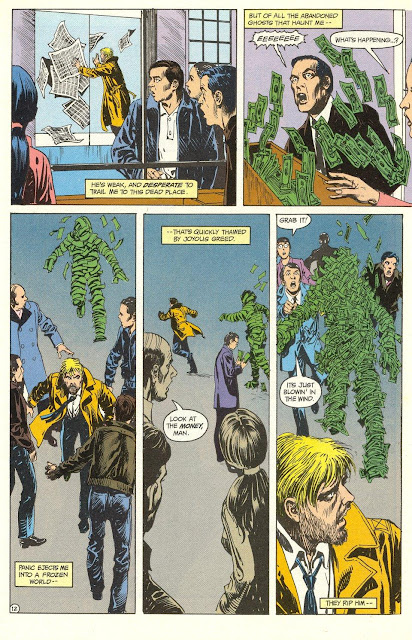 In this instance, when looking for the closest "green", you're more likely to look below, rather than across the page, because you're likely to be distracted by John Constantine's orange trenchcoat. 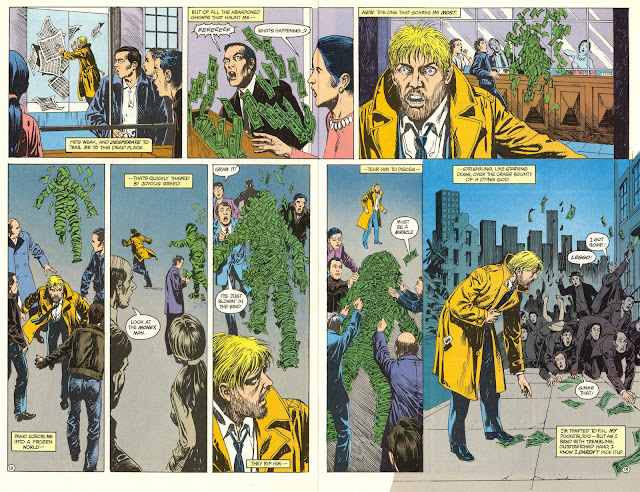 Further compounding this problem is when the spread has panels in the middle that don't line up with each other. If the pages aren't perfectly aligned, they'll look even more out of sync, and further create the illusion of a second page.

While there are detractors who claim that having a comic in pamphlet form is the best way to counter against this mistake, since opening it on the table so the images can be seen in their full glory, and also prevent the font from getting swallowed up within the interior spine, it's not the way most people read comics. Readers are more likely to grasp the pages with both hands, or (blasphemously) fold the pages back, so they can concentrate on one page at a time.

Lately, the influence of Manga has helped avoid this problem by having one long uninterrupted image along the pages that makes for easy transition, instead of being broken up into choppy pieces. Even if there's a descriptive caption on the other side, not much information will be lost. Some scanlations unwittingly have a double-page spread broken up, which won't be obvious to anyone with an eye for detail, or if they're seen in dead tree form. But that's a debate for another time.

Here's a dramatic page as it originally appears... 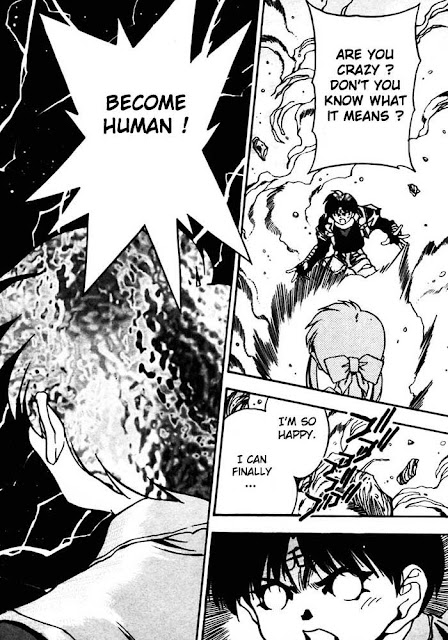 And how it should look. 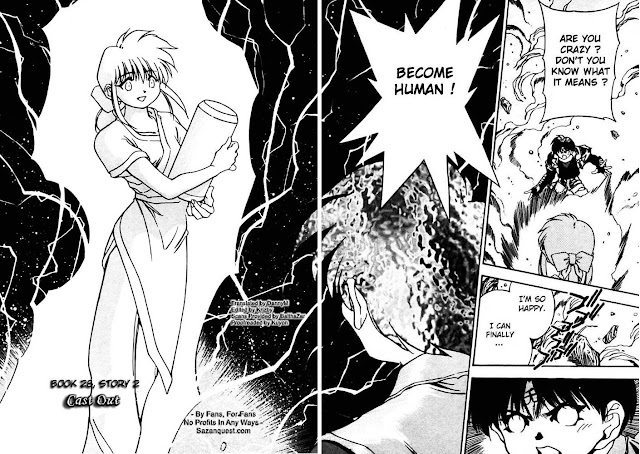