Superheros (or as I like to call them, S-heroes, since they’ve been labeled with everything including Science heroes, Specials, and serious threats get S-ranks) have been a persistent staple of the comics world ever since Superman bashed a getaway car against a rock. The staunchest defenders of Superhero comics claim that there’s literally no genre that Superheros can’t be part of. A Sci-fi Western that’s reminiscent of Star Trek & Star Wars? Superheroes! A Medieval Fantasy with Steampunk overtones? Superheroes! A Sports Drama with a soap opera cocktail? Well, maybe not that last one. The inclusion of Superheroes in everything in the American comics market meant that for anything done in a comic that wasn't about S-heroes was basically an indy comic.

So it was a surprise when at the height of the Quebec Referendum (or as Josh Freed put it, the Neverendum) that an attempt was made to satirize the political events by caricaturizing politicians as muscular men willing to slug out for their issues. 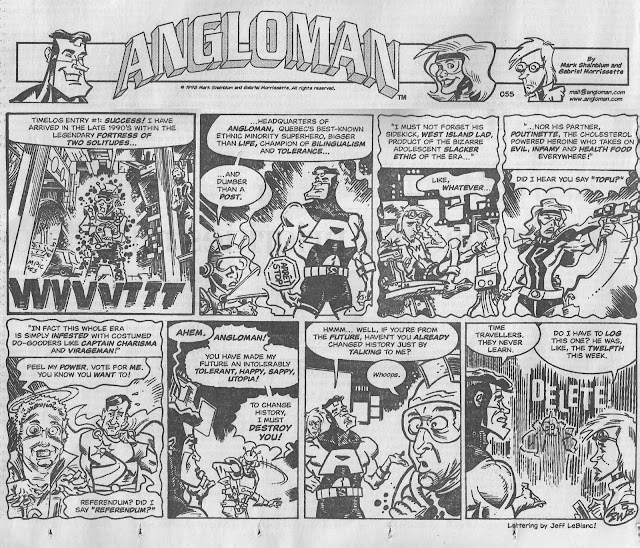 Written by Mark Shainblum and illustrated by Gabriel Morrissette, AngloMan was done on the presumption that the political going-ons would be considered too unbelievable if they were being written down as fiction. An excerpt from a foreword reads;


“We couldn’t make this place up! DC Comics would reject it in a second! Universal Press Syndicate would laugh at us! Hell, even MAD Magazine would probably slam the door in our faces!”

Even so, there are allusions to S-hero archetypes so as not to completely alienate readers. For instance, AngloMan’s costume is modelled after Captain America’s, with a bilingual Stop sign for a shield, and lives in The Fortress of Two Solitudes. His rebelious sidekick, West Island Lad insists on calling it the AngloCave, much to AngloMan’s annoyance. The female partner Poutinette sometimes shows up to help, with a gun that shoots greasy french fries, though she usually works on her own.

Capitaine Souche (based on former PQ leader Jacques Parizeau) gets his power by calling out a secret number, 101, at which a bolt of lightning falls from the heavens and transforms him, and he has an origin reminiscent of Batman where he was traumatized by his parents not getting any customer service in French.
There’s a LOT of inside jokes that’d be completely alien to any outsiders or people ignorant of the Canadian political system. One of the recurring characters in the first book, The Northern Magus is based on Prime Minister Pierre Trudeau, who was best known for saying “Fuddle-Duddle!”

However, the webpage description of NM is slightly incorrect. It should read:

Weight: And he ain’t telling.

Powers and Abilities: There is literally nothing the Northern Magus can't do. He’s a Secret Master of the World, and virtually everybody has done his bidding at one time or another. Angloman may or may not have been set upon his mission and granted his abilities by the Northern Magus. Whether for ultimate good or ultimate evil, we can only guess.

Although AngloMan made his debut in the Montreal Mirror and had two stand-alone books telling longer stories, his exploits have never been fully collected. Part of the reason for the lack of popularity might be the obscureness of the subject material. It could be the scratchy artwork where it was difficult to decipher what was going on, let alone who was being caricatured. Without reference notes explaining the historical themes happening at the time, a lot of the humour is lost.

Another major reason this didn’t catch on is because the face of politics keep changing every year or so. Today’s leaders may not be the same respectable people tomorrow. Not to mention a constantly rotating cast means that chances of seeing any old favorites would only happen if they were caught up in a recent scandal. As such, the odds are not good.

Or maybe it’s because the jokes simply weren’t that good.

Quality satire is difficult to get right, especially if it doesn’t resonate with the public. It didn’t help matters much that people who might’ve been interested in S-heroes wouldn’t enjoy Angloman’s foray in Quebec politics. As much as they enjoy convoluted storytelling, they’d be totally lost without understanding all the references. Not to mention everything was in black & white.

And political cartoonists wouldn’t enjoy S-heroes peanut butter getting their chocolate suits all dirty. At least in the first story of the second book, it showed the fallacy of a Superhero registry system better than Marvel’s Civil War. 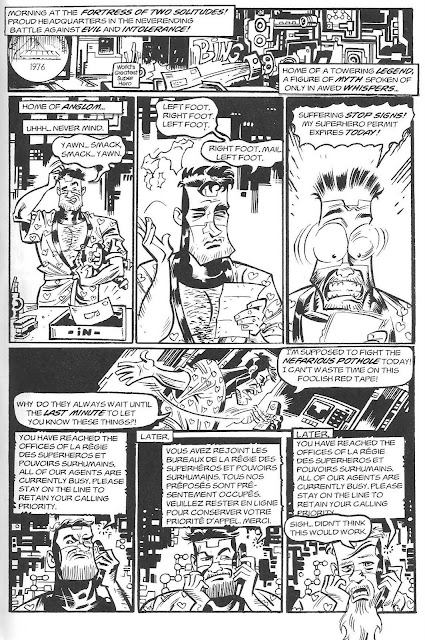 Naturally, Angloman being a Captain America archetype (and rational Superhero) is reluctant to give away his real name. However, he’s assured that he’s protected by the “Loi sur la confidentialé des secrets imbeciles en ridicules”. After being reassured by the confidentiality agreement, he starts filing out the rest of the overly complex form requirements. 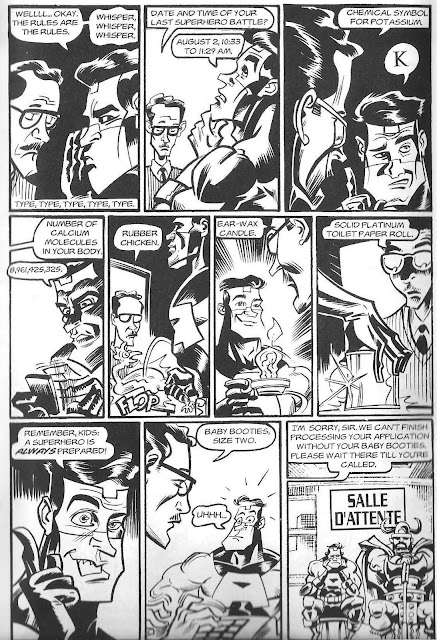 Having failed to meet the requirements, Angloman's forced to wait for his turn and wait for his number to come up: 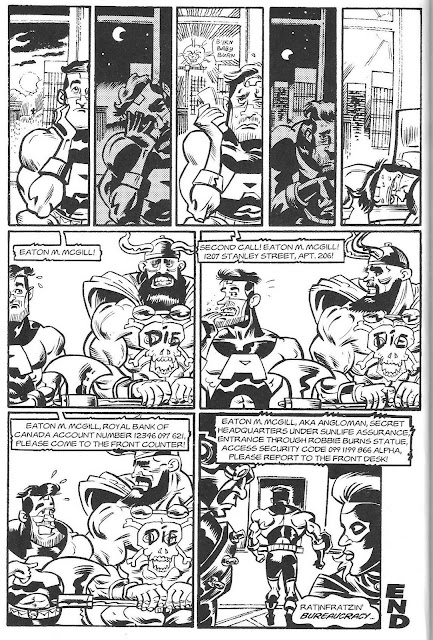 I didn’t bother to save too many of the comics that appeared in the newspaper, since the majority of them went over my head. I only kept the ones that had personal significance or relevance to me. 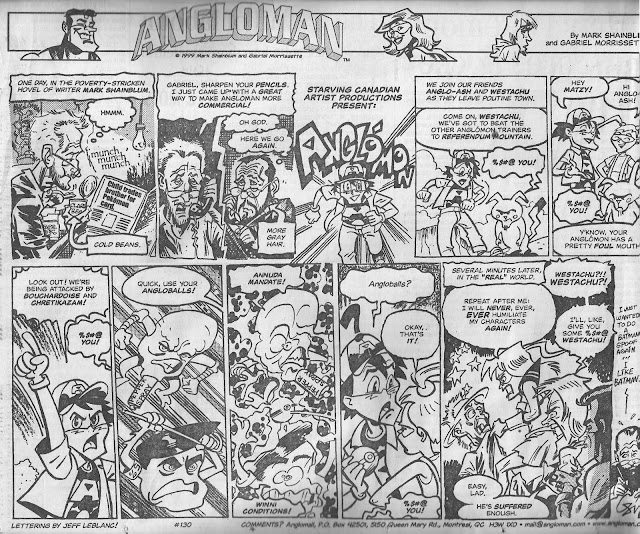 The ironic thing about the comic below is, of the select Angloman comics that’re available for online viewing, they’re all abysmally small, with some random lines of text or art being whited out. This doesn't make a very compelling argument for preserving the comics if we can't read them properly. 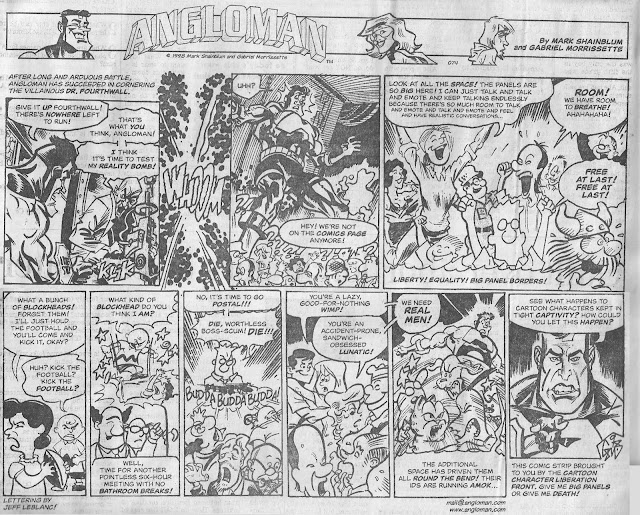 For those of you wondering who the old bald guy with glasses that Dilbert’s shooting at among his victims in his postal rage, he’s Ben of the Canadian comic strip created by Daniel Shelton. He’s a family strip about an elderly couple, their children, and their grandchildren, and is based on what the author feels like he’ll (hopefully) grow up to be when he’s within retirement age.
Posted by DeBT at 11:56 AM