I’ve just recently finished reading the entirety of Legend of Koizumi, and still can’t stop laughing anytime I read a page from the Manga, even though I already know what’s coming. Io9 does a better job of describing the series than I ever could, though there are potential spoilers for anyone who hasn’t bothered to read the series up to the third volume. It’s better to read the online scanlations yourself before checking it out. Once you do, don’t forget to check out the link - it’s worth every word.

For those of you who don’t want to bother reading the link, I should explain the setup. Legend of Koizumi is loosely based on Prime Minister Junichiro Koizumi, who retained his popularity by default of remaining in office longer than his successors. (Similar to how the Liberal Party fell apart once Jean Chretein left) In Koizumi, world leaders decide fiscal policy via Mahjong games. This includes Western leaders such as George Bush and Senior H.W. (Papa) Bush, when in reality they’d much more prefer to settle such matters over games of golf or football. What makes the situation entirely preposterous is that the only way Prime Minister Koizumi manages to consistently win his matches is by rubbing the faces of his tiles so hard that the patterns wear off, therby creating blank tiles that can be used for his signature move, Rising Sun. In other words, the only way to make your fiscal policy succeed is by cheating. 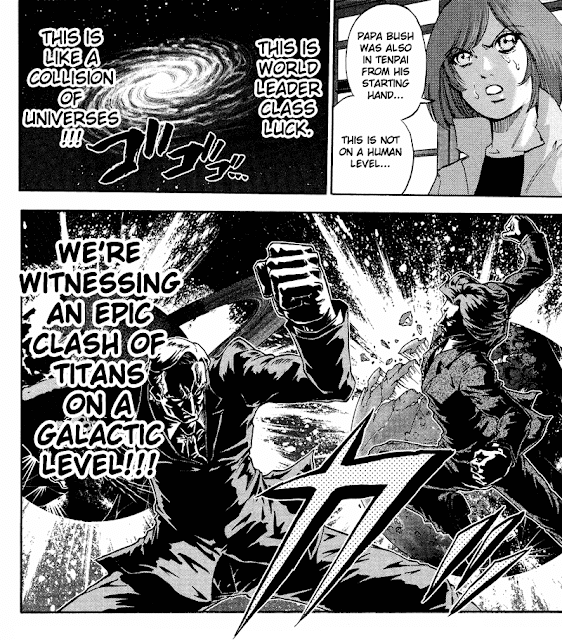 Even though all his opponents know Koizumi cheats, they still allow him to pass his laws and motions. To counter this, they go as far as to create Mahjong tiles made out of a special polymer of depleted uranium that’ll create sparks of 10,000 degrees if any friction is applied to them. But Koizumi manages to rub the patterns off anyways, while saying phrases such as, “I’m willing to throw my body away for the sake of my country!” Such cool speeches somehow manages to win over his opponents, even if his political strategy is insane.

For a game that’s mostly based on luck, this doesn’t seem like a very wise policy. But this is a world where your worth isn’t based on how much pencil-pushing you do behind your desk, but how poised you are while dealing Mahjong tiles. And looking manly while doing it. All while dealing Mahjong patterns that cause physical damage capable of high-speed winds and lightning bolts to the recipient. High-stakes gambling has never been higher. 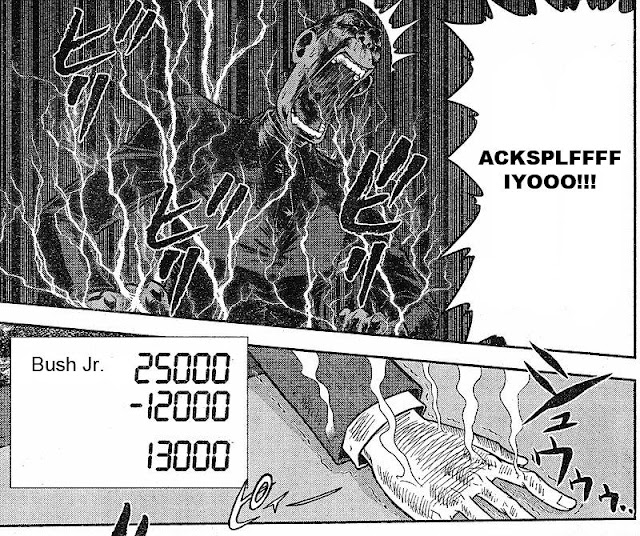 As any athlete can tell you, a sport isn’t enjoyable unless there’s some pain to go along with it. Getting that high at the peak of your performance is the ultimate goal of exercise. And gambling on explosive Mahjong tiles is the best way to show your strenuous strain. If you’re not bleeding all over the place for the love of the game, then you’re not really playing.

If nothing else, it was very reassuring to see Manga Harper making a cameo. It’s just as amusing to see Canadian references in other Media, since it shows that the rest of the world acknowledges that we exist. Sadly, it was very brief, and he, along with most of the G8 team, don’t do much more than making perfunctory commentary from the peanut gallery to make room for the more bad-ass players. It’s understandable why Putin gets more screentime, since Japan has closer geographical relationships with Russia. Still, it feels like a wasted opportunity. It would’ve been amusing to see Harper play against the ministers of Italy, Germany and France, though one suspects that his laid-back demeanor and stiffness would’ve been out of place with the tone of the rest of the Manga. 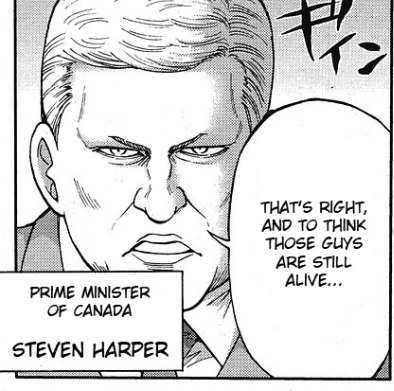 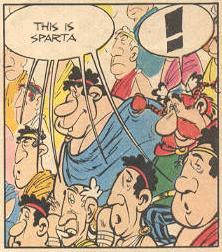 The closest Canadians get in parodying Stephen Harper is on the French TV news cartoon reporter, Laflaque. While not produced with the charming subpar quality of the insane Taiwanese news animation, these 3-D cartoons based on the caricatured drawings of Serge Chapleau are still quite impressive. One recent example was during the recent elections when Stephen Harper denied accusations that he was the Devil.

I’d enjoy it even more if I could understand French. Why hasn’t anybody bothered to translate these?

Still, it’s probably better that Japan didn’t bother to accurately portray Canada’s culture, since the closest interpretations don’t get much further than blatant stereotypes. Since Canada is often labeled No. 2 on the list, it’s no wonder we’re usually looked after the fact. As Desmond Morton put it, Canada is a nation of losers. And indeed, we have an inclination towards failures. Louis Riel failed to rebel against the English. Terry Fox is revered even though he only jogged 1/3 of his route across Canada. It’s the fact that these people got as far as they could with the limitations imposed on them that makes them all the more intriguing.

I feel like I'm getting off topic here, so I'll end with a recommendation to check out the scanlation, since it's very likely it won't be licensed anytime soon. This series very constantly ventures into beyond the impossible territory.

Why can't regular politics be this exciting?
Posted by DeBT at 11:38 PM