How Colourblind Are You?

When viewing Monday's Shortpacked! strip, I didn't see anything unusual about the JLA roster team at first. The only thing that jumped out at me was that Aquaman was wearing a beard, but his appearance had changed so often over the past few years it hardly seemed worth noticing. It wasn't until I saw Robin's comment at the bottom that I did a double-check and realized it was a response to the uproar over the recent news of Ultimate Spider-Man being black. Normally I could care less about the colour of a protagonist's skin. All I really care about is whether the character or story is interesting. If either is built on a cliched premise, my level of interest drops to zero. If Marvel really wanted to be ironic, they'd have Miles Morales wearing the iconic Black Spider-Man outfit. Now there's a prime candidate for the Venom Symbiote.

However, there was a brief stint where I was influenced after reading a bunch of statistics of crimes done by minorities. These racial profiling in urban areas started to make more sense, since these people in this kind of environment were more likely to engage in illegal deeds. By extension, I suddenly started seeing subersive elements in people I never noticed before and I hated myself for it. I was worried that my untapped prejudical nature had been awakened and would never go back to its normal levels of tolerance. That was until my mother reminded me of an incident that happened in grade school. I'd just been transferred from a normal school to a smaller classroom of orally deaf students. Neither of us can quite recall the dialogue that led to the moment, but along the way, my mother made the passing remark that one of my friends, Lisa, was black. This led to the following response:

"She's black?! I never even noticed!"

When I made that remark, my mother knew that I was the least racist person she knew. I felt a little reassured by this news, but still slightly unnerved at how close I'd come to understanding racists' POV. They say it's important to understand the enemy's viewpoint so you can build a better argument against it, but its important not to get too close to the abyss, lest you fall into it.

Part of the reason people don't trust minorities outside their comfort zone may be that they can't tell one foreign face from another. As shown in an episode of The Good Wife, people of different races aren't familiar enough with other races to notice slight differences in their facial makeup. This was one of the major issues I had while watching The Wire. The only way I could tell the Barksdale brothers apart was that one wore an earring, and the other one didn't. (Once I was able to identify who was who, I was able to enjoy the series more upon repeat viewing) For the longest time, I thought that Commissioner Burrell and Senator Clay were the same man. (It didn't help that they never appeared in the same place at the same time) 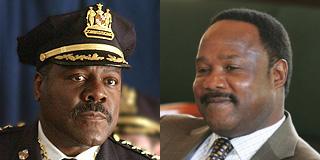 Can you tell these two men apart?

This problem doesn't just apply to black people, but white people as well. When I saw 'Prez' Pryzbylewski on the job as a teacher, I had no idea who he was, even though he was a regular presence in the first three seasons. It's like this for me in real life as well. If I don't see someone within the time span of two weeks, I'll forget all about them. Since my relatives usually show up for the holidays, I'm totally lost unless I have a guest list handy. Usually, I just shake their hands, take their coats and run away.

I'm always amazed that people can remember me, when I can't even be bothered to remember them. If they were any more interesting, they should've made a bigger impact on my life. Part of why I have trouble recognizing people is because I don't have much experience in remembering people's faces. Until I started paying attention to subtle details in Manga characters (such as male/female Ranma), all people looked alike to me.

Now, before any racial minorities get upset over my generalization, I'd like them to compose the following questionaire:

Chances are most people will be between the ages of 1-100, standing upright and not thrusting a weapon in my general direction. Mostly, I identify people by the clothes they wear. Skin colour is way way WAY down my list of priorities.
Posted by DeBT at 5:51 PM