Stardust Vs. the World

Several years ago, a comic site posted one of the most bizarre comics that’d ever been seen. It didn’t follow the ritualistic formula of conventional S-hero comics, where a hero faces off a dastardly villain, only to be setback on their first encounter, then succeed in the next meeting with a resounding punch to the jaw. No, these stories had villains who would devise elaborate plans to take over the world by assassinating presidents, growing mutant birds, or stopping all gravity on Earth. These plans would succeed very well until Stardust would come flashing in and implement horrible bizarre punishments on these bad guys until the artist ran out of pages. The unusual Mary Stu protagonists and repetitive use of stiff poses and photoreferenced drawings made Fletcher Hanks something of a postmortem celebrity.

This led to an ambitious project by a fan who was impressed by the off-the-wall quality of these short comics and went on a personal crusade to find more stories done in his inimitable style. When compiled, comparisions to being the Ed Wood of the comics world were not far off. It’s not just that they were bad, they were remarkably bad. 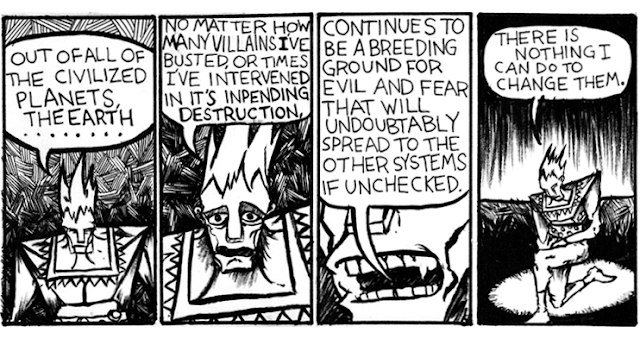 The first book had a lower page count than the second, because Paul Karasik wanted to save the best stuff for last, and was worried there might not be enough material left. He needn’t have worried, since there were more pages of Hank’s hackwork, not counting the stuff that’d been redrawn to replace his stiff faces with goofier-looking protagonists, while still telling the same story.

The popularity of the Hanks characters such as Stardust, Fantomah and Space Smith (I never quite got into Big Red McLane) led to the creation of a fansite where various artists would try their hand at doing their own interpretations. Since they’d never been licensed, and any copyrights would’ve expired with the creator’s death, their images could be taken without fear of infringement. However, despite the promise of more fan tributes to come, there were never any further updates. This was a shame since the spoofed material was of varying quality and just as capturing the essence of a typical Hanks comic, which despite its formulaic premise, isn’t as easy as you think.

Of the six contributors, only T. Allen Spetnagel, Jason Axtell and Elgin Braden, are still available for online viewing via their prospective pages. M!a Paluzz!'s and Stanton Broadway's contributions are still missing. This would be one of these instances where having people compulsively save comics they read would benefit us in the long term. I’m regretting not saving the comic that gave Fantomah the jungle skull-woman a backstory with Anime-influenced art when I had the chance. I opted instead to save what I considered to be the funniest and most sadistic of the Stardust tributes.

In Andrew Greenstone’s version, Stardust is less a lone vigilante residing in a laboratory where he views crime taking place galaxies away, so he can give crooks a fighting chance to carry out their nefarious deeds before he catches up to them. Here, he’s more of a Silver Surfer archetype with an all-powerful master whose physical appearance, save for two large unblinking feminine eyes, defies all description.

Despite the similar setup, Stardust doesn't bother going into time-wasting Shakespearean monologues over how much he despises his orders, but goes straight into doing the job. Now that's work ethics! The results of which are... well, I'll let the remainder of the comics do the explaining for me.

I especially like how all the bad guys on Earth don't so much object to Stardust's genocide of the entire human race, as they do over how he beat them all to the punch first.

For some reason, I'm reminded of Calvin's fantasies where he'd play with his toys and have progressively worse and worse disasters befall his victims. That's what this feels like.