Makeup of a Smurfette

While browsing around, I recently came across an earlier translation of The Smurfette. There are notable differences from the Papercutz version, such as bluer Smurfs, lopsided text that's not always centered, and handwritten sound effects. (This was before computers made it easier to recreate fonts) Even so, it’s interesting to note what both got right, and what they got wrong.

For starters, both had a rather boring cover, despite the original being written in cursive. Maybe they thought audiences wouldn’t be able to read the fancy writing?

In addition to the Gothic text for the recipe, there’s also a different amount of ingredients used in creating a Rule 63 Smurf. I suppose it determines on which handbook you’re reading. For example, one element asks for “A dash of lying tissue, transparent of course...” while the other book has “Half a pack of lies, white of course...” Makes a big difference doesn’t it? 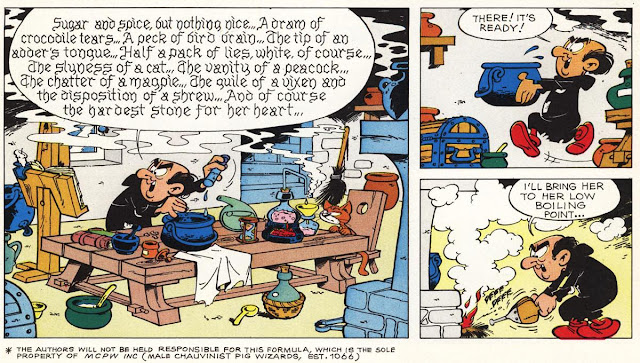 What’s also amusing is that while the latter was criticized as being too harsh on women, the former has a footnote for the authors not claiming responsibility for the text, under the MCPW (Male Chauvinist Pig Wizards) Inc. 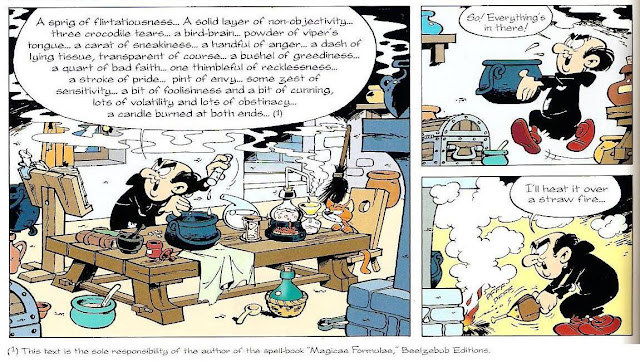 Once Smurfette 1.0 gets accepted into the village, she goes around, snooping everywhere and generally annoying everybody with her presence. One early example is when she finds (and continues to find) a Smurf sleeping on the job. Only, the first discovery is different depending on which version you’re reading. In the first, she sounds more mildly shocked, but in the second, it sounds more like she’s had her preconceptions ruined. She was expecting to find tools, but only found a lazy runabout. 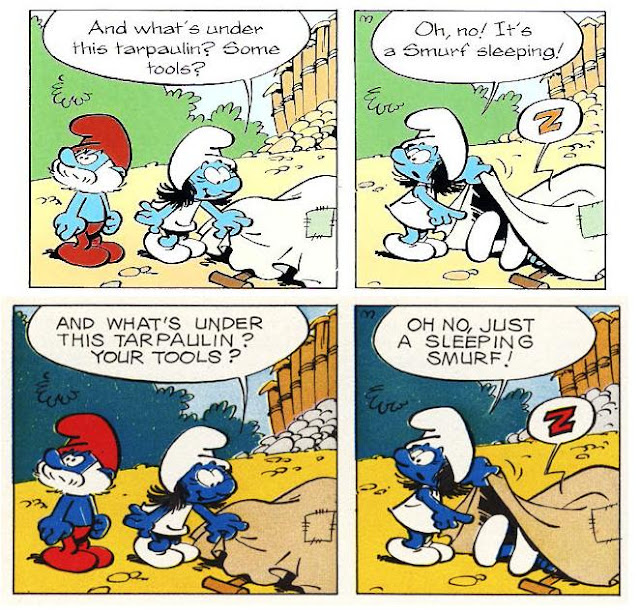 Later, when the Smurfs have had enough of Smurfette’s running around and spoiling their fun with her “girly” stuff, they decide to go to Jokey Smurf for advice. For as annoying as Jokey is with his repetitive pranks, he’s certainly the master of psychological warfare when it counts. Then again, given that everybody keeps forgetting that he hands out explosive gifts on a regular basis, the competitive intellectual level isn’t very high.

So wherever Smurfette goes around, she hears the residents making veiled comments about how fat she’s getting. For the most part, most of what is said is pretty much the same, though there are two minor differences. Can you guess which ones I prefer? 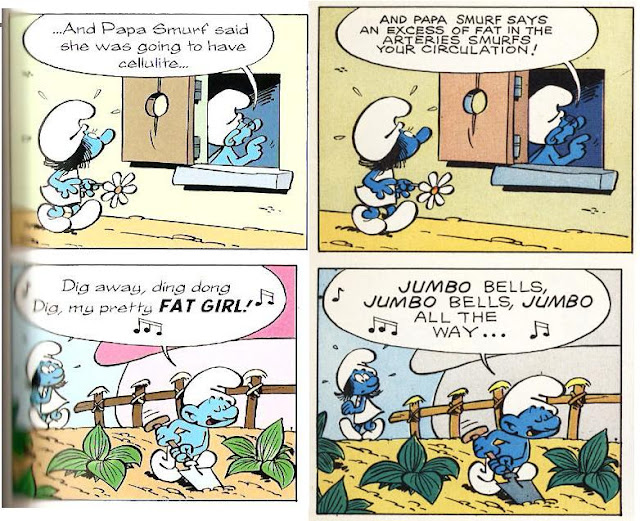 When Smurfette goes to check out the rigged scales, there are different amounts of weight, depending on which measurement unit you’re familiar with. Half an ounce sounds like a lot to me, but as someone raised on metric, I laughed more at the second one.

After being mercilessly teased by everyone, Papa Smurf finds Smurfette crying in bed with suicidal thoughts, and he feels that the best way to boost her self-esteem is to give her plastic surgery. The process isn’t shown, though the ordeal takes three days. By the time Smurfette exits the laboratory, it’s akin to a butterfly emerging from a cocoon, and suddenly, every Smurf who found her annoying suddenly finds her every action charming, even though she hasn’t changed at all.

While the Smurfs are on their way to work, they do some heart carving on trees and picking daisies. The scene passes by so quickly that unless you’re paying attention, you’re likely to miss it. The Papercutz version simplifies the text while explaining nothing, while the earlier version makes it clearer what’s going on. 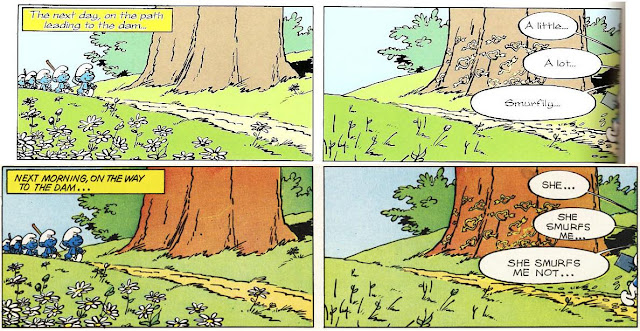 I don’t know about you, but I prefer Grouchy Smurf’s use of double-negatives. 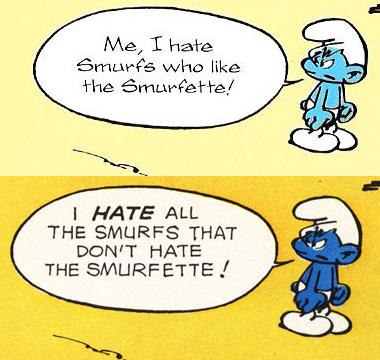 You might’ve noticed at this point that even the songs are changed. When Smurfette starts singing with her screechy voice, her lyrics are different in each. Here’s one short example where I prefer Papercutz’s version, even if the poetic lyrics are oddly slanted with parenthesis.

When Smurfette sweet-talks Poet Smurf into intentionally open the floodgates just to see the gushing water, Papa Smurf goes to all lengths to stop it from flooding the village. Continuing on even after suffering from near drowning, and being harnessed towards the open spigot to physically close it when no one else would dare come close (badass), he asks for further assistance by asking for a hammer to wrench it tight. 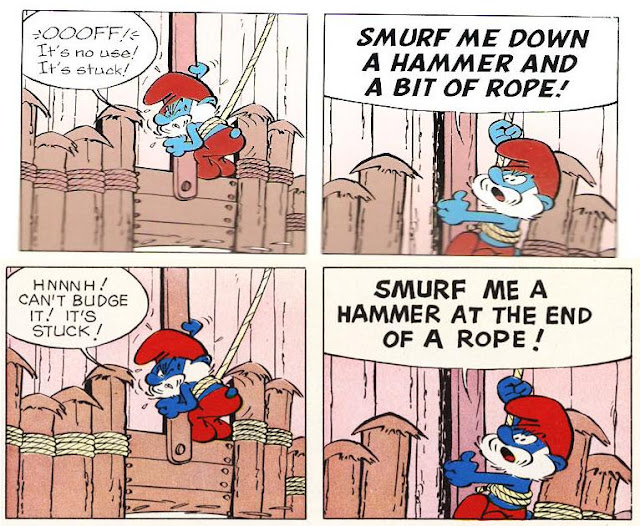 After Papa Smurf surveys the damage done to the village and determining that Smurfette was responsible, she decides she’s had enough of their attitude and proclaims she’s going home to Gargamel’s. At this piece of news, all the Smurfs in the village are shocked, and have her locked up so she can be put on trial, even though most everybody is willing to proclaim her innocent simply because she’s so beautiful. This is another example of being too faithful to the French text. Unless you’re a fungi expert, you’d have to go online to find any reference to it. 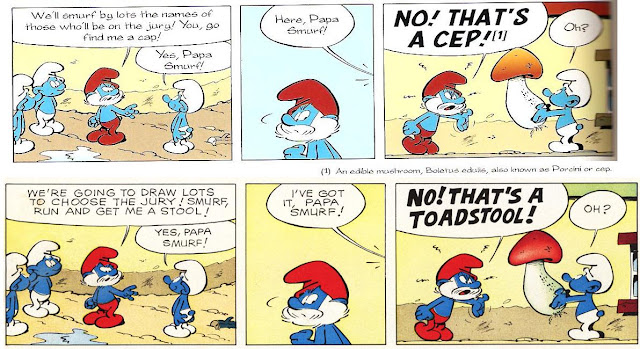 Despite all the subtle differences, the end result is still the same. Even after being given a not Guilty verdict, Smurfette still feels responsible for casting the village into disorder over her very presence, and decides to leave of her own accord (not going back to Gargamel’s), until the village isn’t driven so crazy over her. Just how she manages to survive on her own is something that’s never touched on. Meanwhile, Gargamel slinks off, muttering vows of revenge over his persistent garden gnomes. 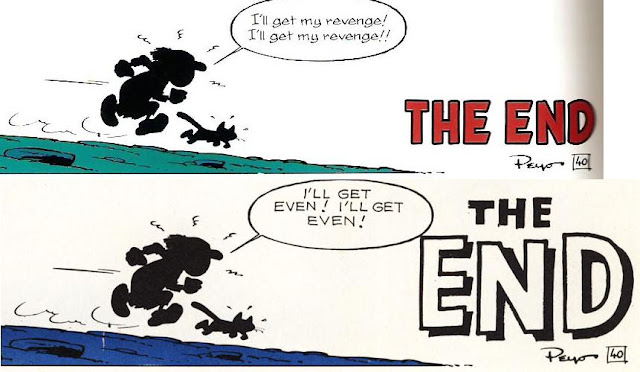