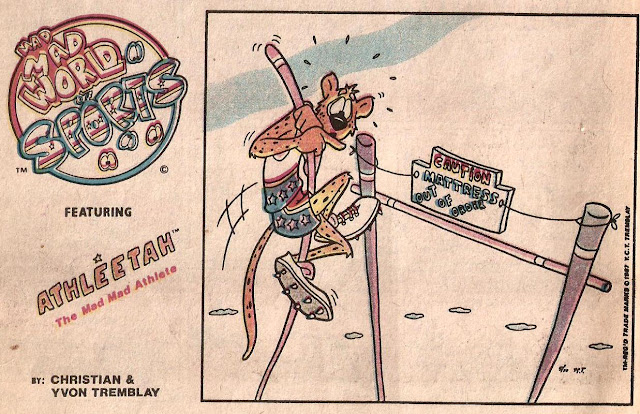 For a blog about Sunday comics, I haven’t talked much about other obscure Sunday comics that haven’t been reprinted. The reasons for this are twofold. Firstly, most of the comics I wanted to talk about, I already gave special mention to and gave them the attention they deserved. The second reason ties into the first, which is that the remainder are comics that weren’t very popular to begin with. 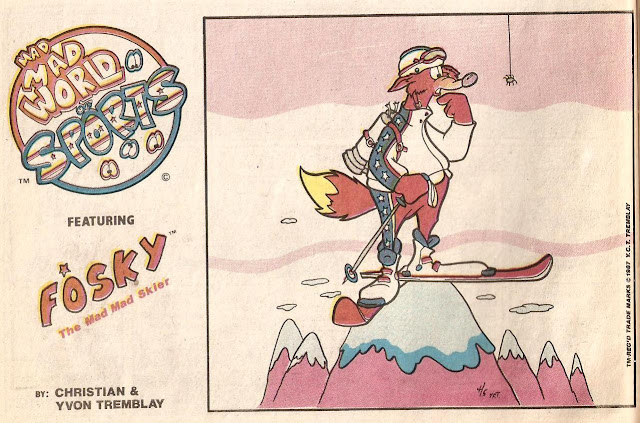 The following is a joint creation between Christian and Yvon Tremblay. (Later YC Tremblay & Blez) I’ve been unable to find any reference to either of them online, which suggests that this was a failed attempt. Not all comics are able to survive the cutthroat world of newspaper comics, even without the legacy strips cluttering up the pages, and these samples show us why. 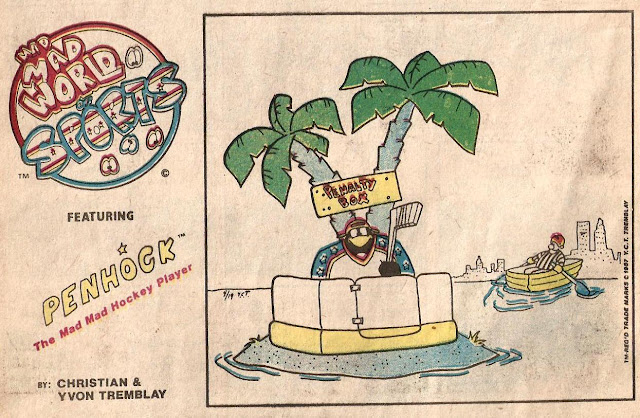 Each strip follows the same single-panel layout. An animal is placed in an absurd situation for their chosen sports profession. Some of these seem rather obvious (a penguin playing hockey) while others seem totally random. (A fox going skiing?) It’s not even an artic fox, but a regular red fox with the typical bushy tail. 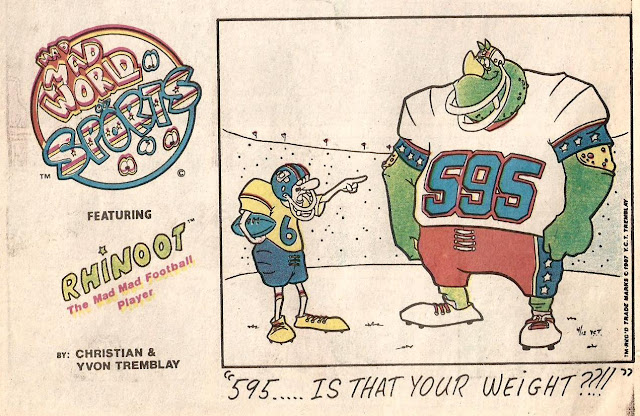 Apart from not quite grasping the audience’s attention, the jokes themselves (the major selling point of any comic) aren’t very funny. It’s notoriously difficult to do single-panel comics that’ll convey everything in one humourous situation, and these examples show how not to create a comic. They have all the semblance of a joke, the drawing of a joke, but it isn’t a good joke. There are bad comics that’re funny because they’re awful, and then there’s bad comics that’re just plain awful. 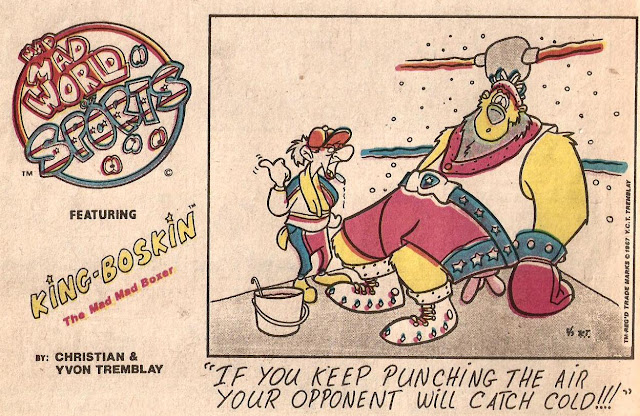 For the most part, they’re more baffling than funny. Like the Monty Python special that collected all of Terry Gilliam’s animations in one short. They’re better seen in small doses than absorbed in one large draft. The problem is that even in small amounts, they’re still largely unsatisfying. 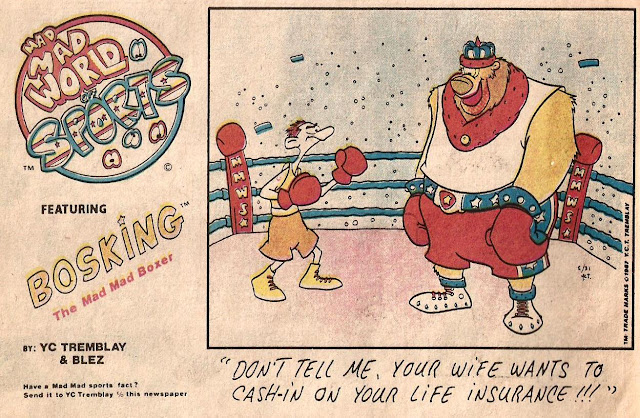 I also suspect that the reason for this strip's obscurity isn't just because of it's subject material, but also because it might've not originated in this country. Take the baseball player rubbing his head. While other comic onomonopia would have him “scratching”, he’s “croushing” instead. Obviously, English isn’t his first language. 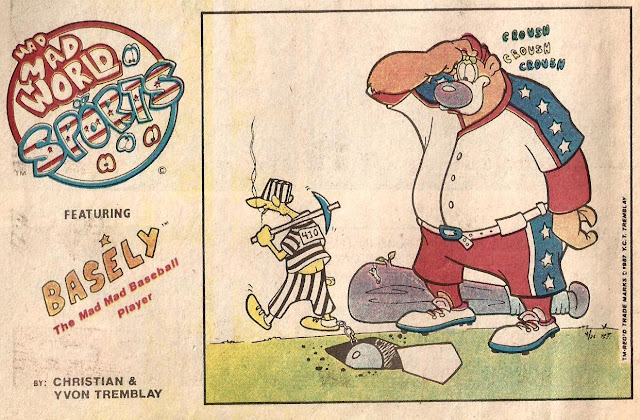 While reoccurring animals were rare, there was a common theme between the ones who showed up more than once. Apparently it was decided it’d be funnier just to focus on large animals who were bigger than the people they were around. Before my newspaper canceled this, only Rhinoot, Basely, King-Boskin (later shortened to Boskin), and Wresly were making regular and frequent appearances. 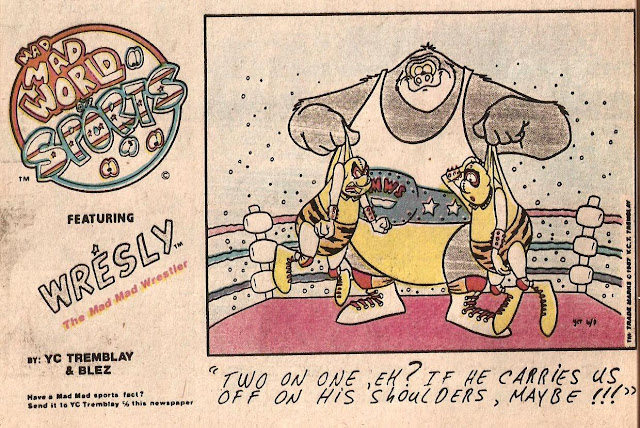 Another reason for not showing these was because the original newspaper print quality for the strips ruined the colourization for many of these comics. The lousy colouring and superimposed double text (making a bad comic harder to understand), would cause epileptic seizures or make people think there was something wrong with their eyes. (Don't worry, it's not just you) I'm wondering if there even is an audience for this kind of stuff. I'm sure there's a surefire formula for displaying cartoonish sports figures in wacky situations, but this isn't it. 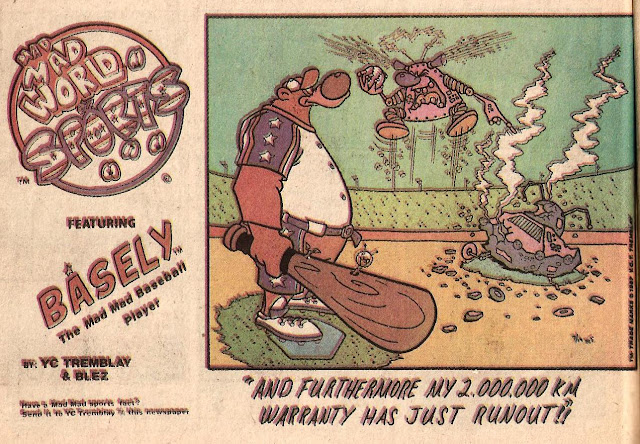