A Few Birds in Stone

I just had what could be considered a Rarebit Dream last night. It was a typical dream that started out with relative normalcy, that eventually ballooned to horrofic proportions. But first, a little explaination about the setting should be in order.

In the bathroom, there were small tiles on the floor with cracked plaster. These were the results of years of gradual erosion combined with spilled water between the cracks. Some of these tiles became so loose that they were only held to the ground by gravity. The cracked plaster didn't just occur to the surface, but also to the foundation undernath. There were chunks so large that they produced deep holes on the bathroom floor. Every day, I would dislodge another piece of loose plaster using wet toilet paper and an unwound paper clip. This wasn't an archeological dig, but I tried to be as careful as possible. One wrong move, and a piece could fall between the cracks and be impossible to take out. I wanted these pieces removed to make sure it would have a better foundation.

Finally, a second layer of cement was placed on top of these crumbling tiles. When the job was finished, I wasn't satisfied with the results, because it didn't feel natural under my feet. There were none of the comforting grooves between the cracks anymore. I was reassured that these would fade away with time, but I wasn't confident.

Sure enough, despite my greatest fears, the plaster coating gradually wore down and started feeling like what I was more used to. However, this meant that for a long time, the bathroom was full of tiny pieces of pebbles that were forever breaking off and bothering me underfoot. As someone who suffers from "Princess & the Pea" sensitivity, this can be very annoying. I started wetting the floor with cloth rags and wiping it constantly so these flecks would stop bothering me all the time. Though I suspect that I might've wiped too hard, because small similar cracks between the tiles have started showing up again. None of the tiles have broken loose, but it's probably just a matter of time.

With that setup out of the way, let's continue onto my dream.

There was a bunch of earlier stuff involving surrealistic desks in the basement, and a VHS library video I bought that I didn't know was pornographic (which made showing it around rather embarassing). Feeling a little flustered, I decided to take refuge into my personal sanctum - the bathroom. I sat down and started reading as normal. (I'm a little unusual in that I can't use the faculties properly unless I have something to read) I can't remember what I was reading, but I noticed that the hole on the floor was a little larger than usual. I leaned down from my position, and started brushing aside the loose concrete when my hand brushed something that seemed to be alive. I was surprised when it turned out to be a tiny hummingbird no bigger than my fingernail. I had no idea where this had come from. Had it been living in the concrete all this time? (Apparently, my subconsious wasn't able to handle living bugs, so it revealed itself as a bird instead)

However, I paid the miniture bird no need, and proceeded to sit on the toilet and do my business. As I continued to read and causually pick at the floor, I noticed that there were more hummingbirds than I thought. They were crawling about in the dirt making high-pitched sounds (I think they were making noise. I wasn't wearing my hearing aids, so I have no idea)

Eventually, in addition to the hummingbirds, larger birds started to appear. There were robins and doves, all of whom could fit in the palm of my hand. I tried to focus on my book, but the number of birds below me was becoming very distracting.

Soon, the hole on the bathroom floor began to develop crater-like dimensions and started to resemble a minature construction site. There were dozens of large birds flopping around in the dirt now. The number of birds increased the bigger the hole became. And some of these birds were also larger than they had every right to be. There were now birds bigger than my arm, and their snapping motion near my feet started to alarm me.

By the time I crushed a puffin's neck underneath my foot, I hightailed it out of there. After slamming the bathroom door shut, I considered putting up a sign up saying "Beware of Birds!", but was worried it might be laughed at. I envisioned a scene similar to what happened to Melanie Daniels at the climax of The Birds. I didn't want any victims to be caught up in a scene of escalation, and had no idea what might happen behind closed doors. I went downstairs to see if anybody was still up, not expecting to see anybody at this late hour. Fortunately, I found my parents watching TV.

My mom turned away from the news report and was surprised to see me. She saw the expression on my face, and asked what was wrong. I started to tell her... and that's when I woke up. The prospect of telling my mother what happened was scarier than what I'd just gone through. I was worried about what her reaction would be, and whether touching the plaster too much would be considered my fault.

This is why I prefer to solve problems on my own. 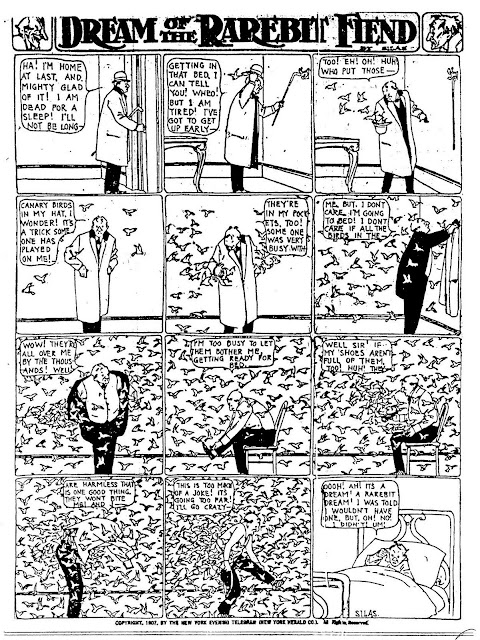